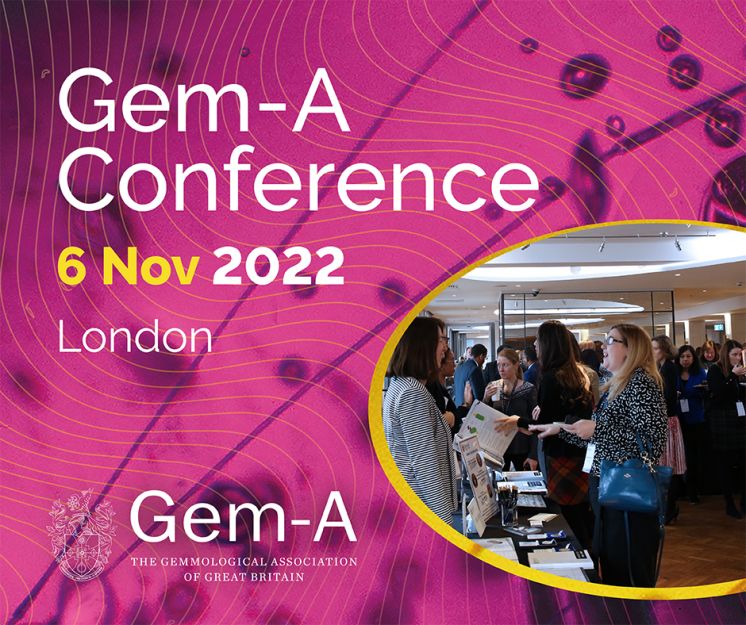 The Gemmological Association of Great Britain (Gem-A) is preparing to welcome gemmology professionals, jewellers, retailers, and scientists to London on Sunday, November 6, 2022, for its annual Gem-A Conference.

This year’s one-day event, which closes for new registrations on Friday, October 28, will take place at etc.venues County Hall in London, which benefits from views over the River Thames and the Houses of Parliament.

The day will consist of eight speakers who will deliver talks based on their respective fields of expertise, including tourmaline, peridot, natural diamonds and jade. Other talks will focus on professional skills associated with gemmology, such as pricing, historical analysis, photojournalism, and scientific detection. This year’s speakers and the titles of their talks are outlined below (alphabetical order by surname):

The Gem-A Conference will conclude with the Gala Dinner, which also takes place at etc.venues County Hall. Guests will be seated for a three-course meal on the evening of November 6, alongside members of the Gem-A team and representatives from Gem-A Conference sponsors. This occasion provides more opportunities for networking in an informal setting alongside evening entertainment, which will be a surprise for attendees on the night.

Gem-A CEO Alan Hart says: “This year’s Gem-A Conference looks set to be a fantastic day of learning and networking for all our attendees. We are thrilled to welcome such a strong and experienced cohort of speakers who will provide our guests with information and insights from a breadth of gemmological perspectives. Every year, the Gem-A Conference seeks to inspire professional gemmologists and students who are starting their journeys. I would encourage anyone wanting to attend to secure their tickets quickly to avoid disappointment.”

Historically, the Gem-A Conference 2022 has been accompanied by a full day of workshops and tours, incorporating some of London’s heritage sites of gemmological significance. This year’s selection includes a private tour of the Natural History Museum, a private viewing of the Gems and Jewellery Gallery at the Victoria & Albert Museum, and a behind-the-scenes tour of the Crown Jewels at the Tower of London. All the workshops and tours on offer sold out in record time from the moment they were announced to Gem-A Members in early October 2022.

Alan Hart adds: “Gem-A Conference workshops and tours are always popular with attendees, especially our overseas guests. From the moment we announced this year’s offering, the available spaces quickly sold out. It’s heartening to see the demand for gemmological learning and the participation of our members, especially after such a long time away from in-person events due to the pandemic. Overall, this year’s Conference is shaping up to be one of our best.”

Elsewhere, the Association is preparing for its annual general meeting (AGM) at its London headquarters on Wednesday, October 26. Members have now been invited to cast their votes on key resolutions via Civica Election Services (CES) and peruse the Association’s audited accounts. This will allow them to have a say in the Association’s upcoming activities.

Further information about the Gem-A Conference 2022 can be found here: gem-a.com/event/conference-2022

The Gemmological Association of Great Britain, or Gem-A, is the world’s longest-established provider of gem and jewellery education. Our Gemmology Diploma evolved from the first gem course proposed for the UK jewellery trade in 1908, and our prestigious Gemmology and Diamonds Diplomas — taught in seven different languages and 26 countries around the world — are recognised globally.

Gem-A forms an international community of gem professionals and enthusiasts. We serve the interests of the gem and jewellery industries through high standards of education in our courses and our support for global gemmological research. We also provide various membership opportunities, offer high-quality gemmological instruments, and host a number of educational events throughout the year, as well as two internationally distributed publications, The Journal of Gemmology and Gems&Jewellery.

About The Journal of Gemmology

The Journal of Gemmology has been the official scientific journal of the Gemmological Association of Great Britain since it was incorporated in 1947. It is published quarterly in print and electronic formats. All Individual and Gold Corporate Members of Gem-A receive The Journal as part of their membership package. Institutional subscriptions are available to laboratories, libraries, museums and similar organisations.

Rate this item
(0 votes)
More in this category: « Gem-A Launches Latest Edition of The Journal of Gemmology with a Focus on Emeralds and Turquoise
Tweet