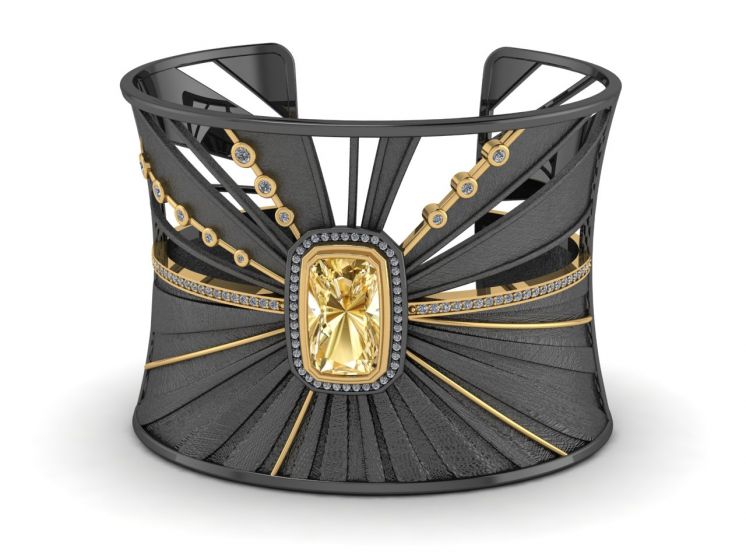 Gem-A are delighted to announce that Susan Blackler, of Sonkai Ltd., is the winner of Gem-A's newly-revamped Gem Empathy Award 2016, with her design titled ‘Supernova’.

In previous years the award has been presented to the IJL exhibitor displaying, in the opinion of the judges, a single piece or collection of jewellery that makes captivating use of one or more gemstones. This year, however, Gem-A has remodelled the creative initiative, requesting that designers featured in the Design Gallery at IJL, produce a design based around a breathtaking 10.46 ct Fantasy Cut heliodor (also known as golden beryl), sourced from award-winning gem cutter John Dyer.

The judges included Gem-A CEO, Alan Hart and Teaching Manager Claire Mitchell; former multiple winner Chris Sellors and IJL Event Director, Sam Willoughby. Whilst the judges were extremely pleased with the quality of the submissions received and impressed with the talent of all designers who took part, they were unanimous in their decision to present the award to Susan for her Supernova design. The striking piece, a cuff formed from textured sterling silver with an oxidised finish, prominently features the Fantasy Cut stone in a central 'double walled' bezel setting in rich 18 ct yellow gold. Echoing the theme of the sun and stars ('helios' is the personification of the sun in Greek mythology), Susan's exquisite design features additional detailing of radiating bands of pavé and flush-set small diamonds, along with 18 ct vermeil detailing.

Of the piece, Susan said: “I wanted to create a striking, futuristic design featuring bold geometric shapes which echo the radiating facets of the 'Star Brite' fantasy cut heliodor. ’Folds' of oxidised silver arranged around the centrally placed stone act as a continuation of the gemstone cut and serve to focus attention on the gem. Bands of pavé-set diamonds and polished yellow gold detailing suggest rays of light and I had in mind constellations of stars set against the dark night sky when I added these details.”

The submitted designs were evaluated based on the relationship between stone and design; the practicality of the design;and the style and beauty of the overall design. When asked about the winning piece, Alan Hart, Gem-A CEO and one of the judges, said: “We are pleased at the success of the new format of the Gem Empathy Award and have been overwhelmed at the enthusiastic response by talented designers jumping at the opportunity to design a piece around a gemstone cut by John Dyer. This competition places the gemstone at the heart of the design and Susan is a deserved winner".

Susan was presented with the Award at International Jewellery London (IJL) on Tuesday 6 September by Alan Hart, Claire Mitchell and Sarah Kitley-Spencer from IJL. The heliodor has since been given to Susan in order to bring to life this stunning design, which Gem-A hope to display at one of their prestigious events between 2016 and 2017.

Sonkai Ltd., a family jewellers based in Norwich, have been producing bespoke and handmade jewellery since 2006, and specialise in creating high-quality and unique jewellery from new materials and by transforming existing pieces.

Rate this item
(0 votes)
More in this category: « Jewelry Television (JTV) confirmed as Platinum Sponsors of the Gem-A Conference
Tweet