Gem-A Member Jan Asplund FGA DGA explores the fascinating history of 'Caesar's Ruby' – a 255.75ct gemstone that has been regarded for centuries and traded among French, Russia and Sweden since the late 16th century.

Caesar's Ruby is a piece of jewellery well known to anyone with a special interest in the history of the Russian and Swedish Crown Jewels. However, for most, the stone and its history are quite unknown. Perhaps some may have encountered it in Dave R. Mortensen fiction novel Iron dogs & Caesar's Ruby published in 2013.

Caesar's Ruby is a historical jewel that eventually turned out not to be a ruby at all but a rubellite tourmaline after it was examined by the mineralogist Aleksandr Evgenevich Fersman (1883-1945) while he was overseeing an inventory of the Russian crown jewels in 1922. In 1925-26 Fersman published Russia's Treasure of Diamonds and Precious Stones and the historical jewel's true identity became more widely known.

The news that the stone was not a ruby caused some concern and disbelief in Sweden where the stone had been a part of the crown jewels between 1689 and 1777. In a series of articles in Svenska Dagbladet, one of the major Swedish newspapers, it was questioned whether it really was the same stone that had been part of the Crown Jewels and once thought to have been the largest ruby in Europe.

That the stone identified by Fersman as a red tourmaline was the very same as the one given away by Swedish King Gustav III to Catherine II of Russia in 1777 was proven by professor Aminoff, after he had studied older documentation and compared the size and weight relation of two models made of the stone in 1748. After comparing the measurements of the models and calculating what its weight would be if it was a ruby the result showed a much lower specific gravity than corundum but matching the specific gravity of tourmaline. The size and shape of the partly cut stone from the Swedish Crown Jewels were just slightly larger than the raspberry shaped Caesar's Ruby.

Tracing the History of Caesar's Ruby

The oldest known documentation of the stone dates back to the late 16th century when it appeared among King Charles IX of France possessions. When Charles IX died in 1575 his wife Elisabeth of Austria brought the stone with her when returning to her father’s, Maximillian II, court. Shortly after Elisabeth's return her father died and her brother became Rudolph II, Holy Roman Emperor and King of Bohemia.

In Gemmarum et lapidum Historia from 1609 Boetius de Boot describes Emperor Rudolf II's unique red gem. De Boot believes it is a real ruby or carbuncle and according to him the stone was once bought for 60000 ducats, a price he states was far below its real value as he considers the gem might even be priceless. De Boot referred to the stone as 'Caesaris rubinus' which translates to 'the Emperor's Ruby'. This name stuck and it is still exhibited as 'Caesar's Ruby' at the Diamond Fund in Moscow.

Between 1618 and 1648 the Thirty Years' War was fought in Central Europe and during the Battle of Prague the Swedish army captured and looted Prague Castle, including Rudolph II's treasury. Among many other treasures Caesar's Ruby was taken. Eventually, General Hans Christoffer von Königsmarck gave the jewel to the Crown Princess Christina resulting in him being ennobeled shortly after Christina was crowned Queen of Sweden in 1650.

When Christina abdicated the throne in 1654, converted to Roman Catholicism and left the country she took Caesar's Ruby with her. On her way to Rome she stayed a few years in Amsterdam where in 1655 the stone was pawned together with other pieces of jewellery she had brought with her. In the accounts of the objects pawned, Caesar's Ruby was described as a 'rubin balais', an early indication that the stone was not really a ruby, something also implied by Buffon in his 1786 published work Historie naturelle des minéraux.

Christina died in Rome in 1689 and she had appointed Cardinal Deico Azzolini as her heir. The Cardinal died just two months after Christina and his heir in turn was his nephew Marquis Pompeo Azzolini. During the distribution of Christina's heritage Sweden's King Carl XI made claims on the pawned jewellery that was still in Amsterdam. Eventually Christina’s jewellery was brought to Stockholm and was included in the Crown Jewels. Because of the struggle over Christina's heritage the jewels were described several times with details, making it easy to confirm that the stone really was the same as described by Boetius de Boot as well as the one in later inventories of the Swedish and Russian Crown Jewels.

On the Brink of War

In 1748 Sweden was at risk of war with both Russia and Denmark, something that would be very expensive. Government officer Carl Gustaf Tessin suggested on the 24 October that the 'great ruby' should be valued in case there was a need to finance an armed conflict. The stone was well-known as it was supposed to be one of Europe's largest rubies and was known to have been pawned before.

A decision was made to make a model of the stone. Court jeweller F. Bergh was ordered to bring a modeller the next day and a model in red wax was made. The jeweller was under the impression that the rough stone was going to be cut and that that was the reason for making the model. Another second model was made in lead and together with Berghs description of the stones colour and flaws it was sent to the lapidary Johan Feychting. Feychting made a third model in red glass that he cut into a facetted pearshape measuring 36x32x22 mm (pictured top right). 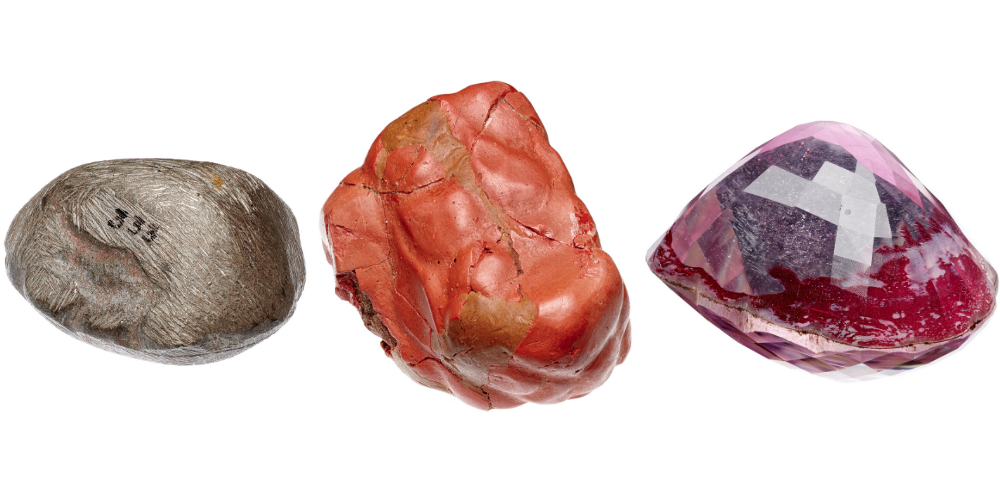 From left to right: a lead model of Caesar's Ruby made in 1748; a model of the gem in red wax; a model in glass crafted by Johan Feychting in 1748. Photocredit for all images, Ola Myrin, Livrustkammaren SHM (CC BY).

The Grand Entrance of Catherine the Great

The risk of war eventually declined and so did the Crowns urgent need of cash. When the Swedish king Gustav III's cousin Catherine II was enthroned in Russia in 1762 there was opportunity to better the relation between the two countries. During the summer of 1777, Gustav III visited Catherine II in St Petersburg for one month. Gustav III's visit coincided with the fifteenth anniversary of Catherine ascending the throne. After the celebration dinner the guests went out for a walk, Catherine was magnificently dressed with plenty of diamonds, but she also had a magnificent walking stick with her. The walking stick's handle was set with a large diamond solitaire and a braid of pearls terminating in a pair of tassels set with 450 diamonds. Everyone was impressed by the object and when Gustav III expressed his delight at being shown such an exquisite creation, Catherine said it was his to keep.

The gift caused a dilemma for Gustav III as he naturally was expected to match it with a gift to his hostess. However, somehow the King knew that he would receive something very special and expensive; something he told about to his brother, Duke Carl, in a letter dated 26 June 1777. The King wrote that he would receive a gift of exquisite splendour including many diamonds. The King acknowledged he was not in the possession of anything that would be an equal return, but that he had come to think of the pale red ruby among the regalia. The regalia were not the King's property to disperse with at his own will. He was very clear in his letter how important it was to keep the plan secret.

To borrow or disperse anything from the Crown Jewels required permission from the Council of the Legal, Financial and Administrative Services Agency, a procedure Gustav III did not have time to go through. The King was not trying to hide from his brother that he was going to present the stone to Catherine II as a gift and that he did know what he was doing was against Swedish law. He could probably have received the stone legally by telling the council that he wanted to wear the jewel at the 15 year anniversary of Catherine ascending the throne, but could not afford any delays in receiving the stone.

Duke Carl aquires the stone and sends it by trustworthy courier to St. Petersburg as quickly as he can. Catherine II seemed impressed by the gift and since that moment it has been a part of the Russian Crown Jewels. It is still unclear when and by whom the stone was cut into its current raspberry like shape (pictured top left) and also how and when the stone first came to France. The only opinion on the stone's geographical origin is Fersmans' suggestion of Burma, but no further investigations have yet occurred.

During the First World War Caesar's Ruby was moved together with the rest of the Russian Crown Jewels from St Petersburg to the Kremlin in Moscow, where it still resides today and is a part of a permanent exhibition.

Did you know? The Gem-A team confirmed the world's oldest-known carved tourmaline in 2019. Read more here.

Discover more gemstone stories, insights and field trip reports from around the world on the Gem-A Gem Hub. To start your gemmology journey and get to grips with the essentials, take a look at the Gem-A Gemmology Foundation course.

Cover image: From left to right, Caesar's Ruby - a 255.75 ct rubellite tourmaline measuring 4x2.7x2.3 cm, photo used with permission from the Diamond Fund of Russia (photo credit Min), and the suggested cut for Caesar's Ruby made in glass by Johan Freichtinger in 1748, photo credit Ola Myrin, Livrustkammaren SHM (CC BY).

More in this category: « What is the Indian Style in Art Deco Jewellery? American Gemstones: Yogo Sapphires from Montana »
Tweet
Become a Gem-A Member
Apply to become a Gem-A Member
Subscribe to our Newsletter
Keep updated with Gem-A
Sign Up
Get in Touch
Can't find what you're looking for?
Contact Us