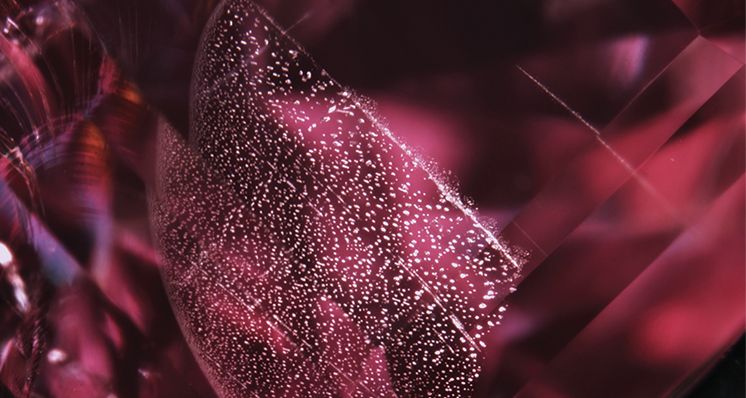 This article by Guy Lalous ACAM EG summarises a study of the geology, gemmological and physical properties of rubies and pink sapphires from Aappaluttoq, one of the last pristine spots on the planet not far from the arctic circle.

What is the difference between metamorphism and metasomatism?

When rocks change because of an increase in the pressure and/or temperature of their surroundings, it is called metamorphism. When metamorphism is accompanied by a change in the chemistry of a rock, the rock is said to have been metasomatised. Metasomatism involves changes in mineralogy and structure along with the addition and/or removal of elemental constituents.

What are mafic and ultra-mafic rocks?

The corundum from Greenland occurs within a phlogopite-bearing metasomatic rock. The rocks at Aappaluttoq have been subjected to high-pressure, high-temperature metamorphism. The mineralisation at Aappaluttoq is hosted by a reaction zone that formed from metasomatic interactions between ultramafic rock (peridotite) and mafic rock (leucogabbro). The peridotite has low silicon oxide (45 wt.%) and contains various chromophore elements (particularly Chromium, but and also vanadium, iron and titanium). The leucagabbro has an aluminium-rich composition.

During regionals metamorphism, fluid interactions between the two differing rock types created a metasomatic reaction zone encompassing part of the peridotite, the leucogabbro and the contact zone between the two units. Upon regional cooling, the reaction zone formed significant volumes of stable phlogopite with corundum. The availability of chromium from the peridotite allowed the substitution of Cr3+ for Al3+ in the corundum, producing its pink to red colour.

In the mid-infrared region of the spectrum, some rubies and pink sapphires from Greenland showed distinct bands at approximately 3310 and 3075 cm−1 (and weak bands at approximately 2100 and 1980 cm−1). These features indicate the presence of boehmite, which was mostly concentrated along intersection tubules related to twinning and/or parting planes. Such absorption characteristics are helpful not only for identifying the presence of foreign mineral phases, but also for proving that a gem has not been heated.

What about origin determination and treatments?

A genuine untreated ruby is increasingly rare and non-treated gems fetch a substantial premium. Proven origins such as Kashmir for sapphires or Mogok for rubies may considerably contribute to the value of a gemstone. The trade is therefore requesting origin determination from gemmological laboratories. It all started with a microscopic approach in the eighties and developed over time as chemical and spectroscopic criteria were introduced.

The chemical composition of the Greenland rubies and pink sapphires is characterised by relatively high iron contents and comparatively low concentrations of titanium, vanadium and gallium. The iron content separates them from the majority of stones from marble-type deposits.

Rubies and pink sapphires from basalt-related deposits also contain relatively high iron, although correlations between other trace elements can help to separate them from those of Greenland. The iron content of our Greenland stones was similar to that of some rubies and pink sapphires from East Africa. Further work on the trace-element and isotopic composition of the Greenlandic material is ongoing and should prove helpful for origin fingerprinting. Certain mineral inclusions such as cordierite, cosalite and catapleiite may point to a Greenland origin.

Modern mining techniques are planned to maximise production and minimise cost. The mine economics were modelled using only melee-sized rough gem material. Pink sapphire makes up approximately 60-80% of the production, with ruby making up the balance. None of the stones included in the study were heat treated. It should be expected that heated Greenland corundum will become available at some point. The deposit has the potential to make an important contribution to the global supply of ruby and pink sapphire for many years. ■

This is a summary of an article that originally appeared in The Journal of Gemmology entitled ‘Ruby and Pink Sapphire from Aappaluttoq, Greenland’ Christopher P. Smith, Andrew J. Fagan and Bryan Clark 2016/Volume 35/ No. 4 pp. 294-306

Tagged under
More in this category: « Greenland Ruby: The Mighty Aappaluttoq Arises Understanding Jade and its Importance in China »
Tweet
Become a Gem-A Member
Apply to become a Gem-A Member
Subscribe to our Newsletter
Keep updated with Gem-A
Sign Up
Get in Touch
Can't find what you're looking for?
Contact Us