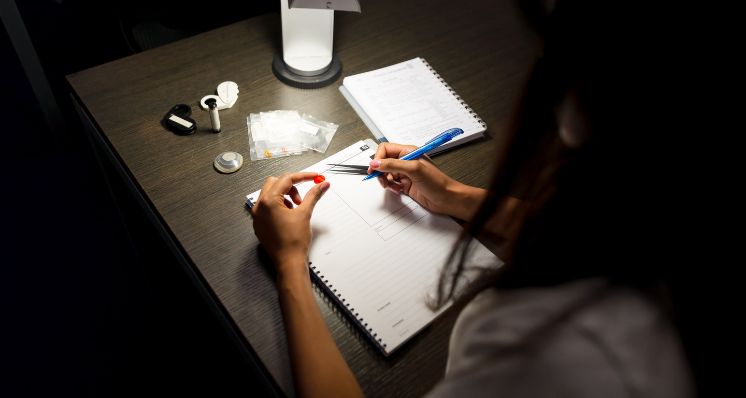 Sometimes known as ‘emerald by day, ruby by night,’ the gemstone alexandrite is a marvel of nature and the alternative birthstone for those born in June. Here, Julia Griffith FGA DGA EG explores the history, properties and colour change effect of this fascinating gem.

Alexandrite is an extraordinary gemstone that appears green or red dependent on the light it is observed under. This colour change effect is sometimes referred to as the ‘alexandrite effect’. The rarity of this material and its chameleon-like qualities make alexandrite one of the world’s most desirable gemstones.

Alexandrite was discovered in 1834 alongside beryls within the prestigious emerald mines of the Russian Ural Mountains. It is part of the chrysoberyl family, which is separate to beryls, being a beryllium aluminium oxide as opposed to a silicate. Chrysoberyls have good durability and a hardness of 8.5 on the Mohs scale, making them perfect for use in jewellery. This all depends, however, on whether you can find an alexandrite to begin with! 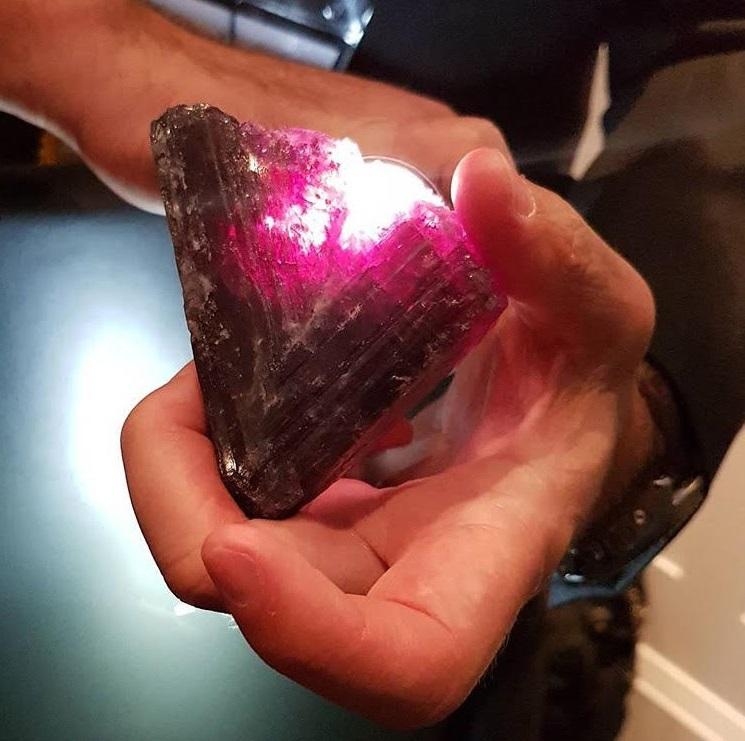 A large alexandrite specimen presented by Evan Caplan at the Gem-A Conference 2017. Photograph by S Dowthwaite FGA DGA on Instagram.

Alexandrite is so rare that it has never truly been the main aim of commercial mining. Instead, it is a happy ‘by-product’ as the likelihood of uncovering it in any significant quantity is very, very slim. In Russia, just one crystal of alexandrite was found for every hundred-or-so emeralds.

Clarity is poor in the majority of alexandrites – they are commonly riddled with fractures and appear translucent to opaque. Such specimens have little value and are often unusable as gems in jewellery. Rough specimens over five carats in weight are also scarce and most alexandrites found on the market are under one carat. Prices for fine specimens above a single carat will rival or surpass fine quality rubies, emeralds and even diamonds, making them one of the most expensive and rare gemstones in the world.

The most important factor for alexandrite is the quality of its colour change. The most prized colour change is a strong raspberry red in incandescent light and a bright green in daylight - however an absolutely perfect specimen is not known to exist!

The colour change effect is due to alexandrite transmitting green and red light equally. Incandescent and daylight light sources are richer in different wavelengths (red or blue and green respectively) and this has a direct effect on what colour the gemstone appears to the human eye.

Alexandrites are also noted for their strong pleochroism. This is an independent optical effect from colour change, in which the gem will appear different colours from different directions. In alexandrite the pleochroic colours are green, orange and purple-red.

The finest quality alexandrites are said to be from the original deposits in Russia, which were mined out in the 19th century. The name ‘Alexandrite’ was chosen to honour the Russian Tsar Alexander II. Legend states that this rare and beautiful stone was found on the day the heir became of age on his 16th birthday.
The vibrant red and green colours observed also mirror the colours of the national military of Imperial Russia. This led to alexandrite being named the official stone of the Tsardom of Russia.

Another example of the colour change effect in alexandrite.

According to Russian legend, wearers of alexandrite reap many benefits including good luck, good fortune and love. A popular belief is that alexandrite helps the wearer strive towards excellence by bringing concentration, discipline and self-control.

Nowadays, alexandrites are mined from Brazil, Myanmar, Tanzania, India and Madagascar. Sri Lanka has also produced some fine specimens - the world’s largest faceted alexandrite hailed from this locality and is a whopping 65.7 carats. A further rarity is chatoyant or ‘cat’s-eye’ alexandrites, which are cut in cabochon to reveal this optical effect.

Alexandrite has such extreme rarity that those seen on the market might not be quite what they seem. Alexandrite has been successfully synthesised in laboratories since the 1960s and these synthetics have the same chemical, physical and optical properties of natural alexandrite and show a strong colour change.

The most common simulant is synthetic colour change sapphire, which shows a greyish blue to pink colour change. At just a dollar or two per carat - it is extremely common on the market. This material has been made since 1909, so is often found in antique pieces of jewellery.

An example of synthetic alexandrite.

A good colour change, good quality, transparent natural alexandrite could easily cost the consumer a five figure sum per carat and beyond. This, however, is a fine price to pay for such a spectacular and exceptional gem. ■

Do you want to find out more about gemstones and understand their physical and optical properties? Start your gemmology journey with the Gem-A Gemmology Foundation course.