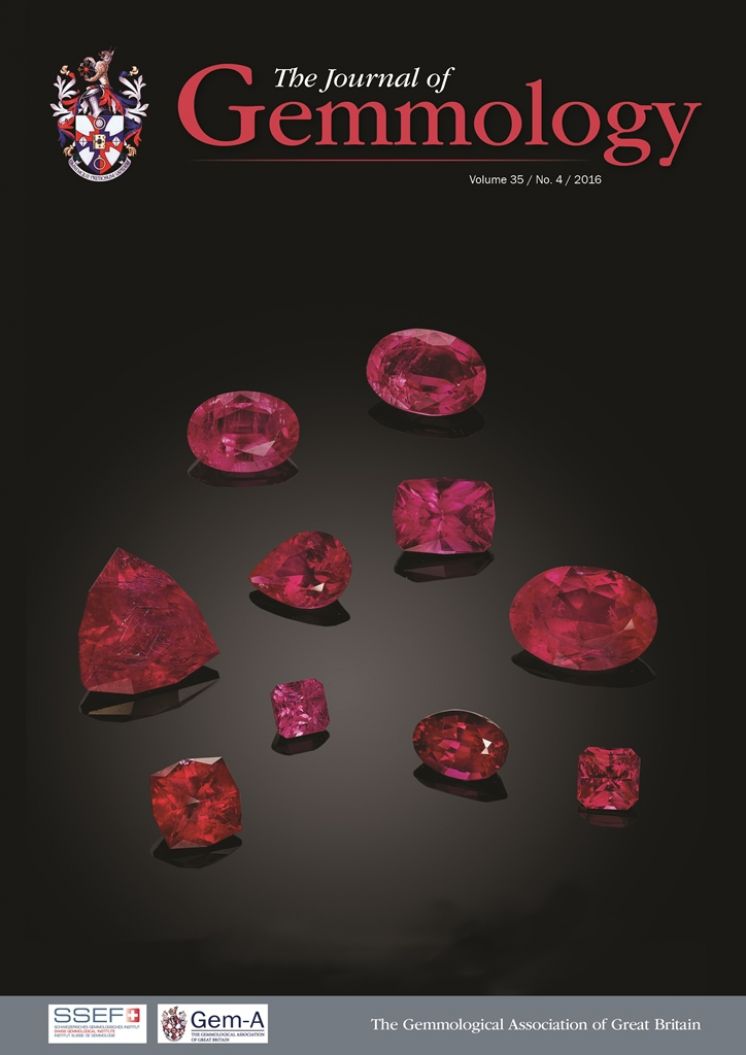 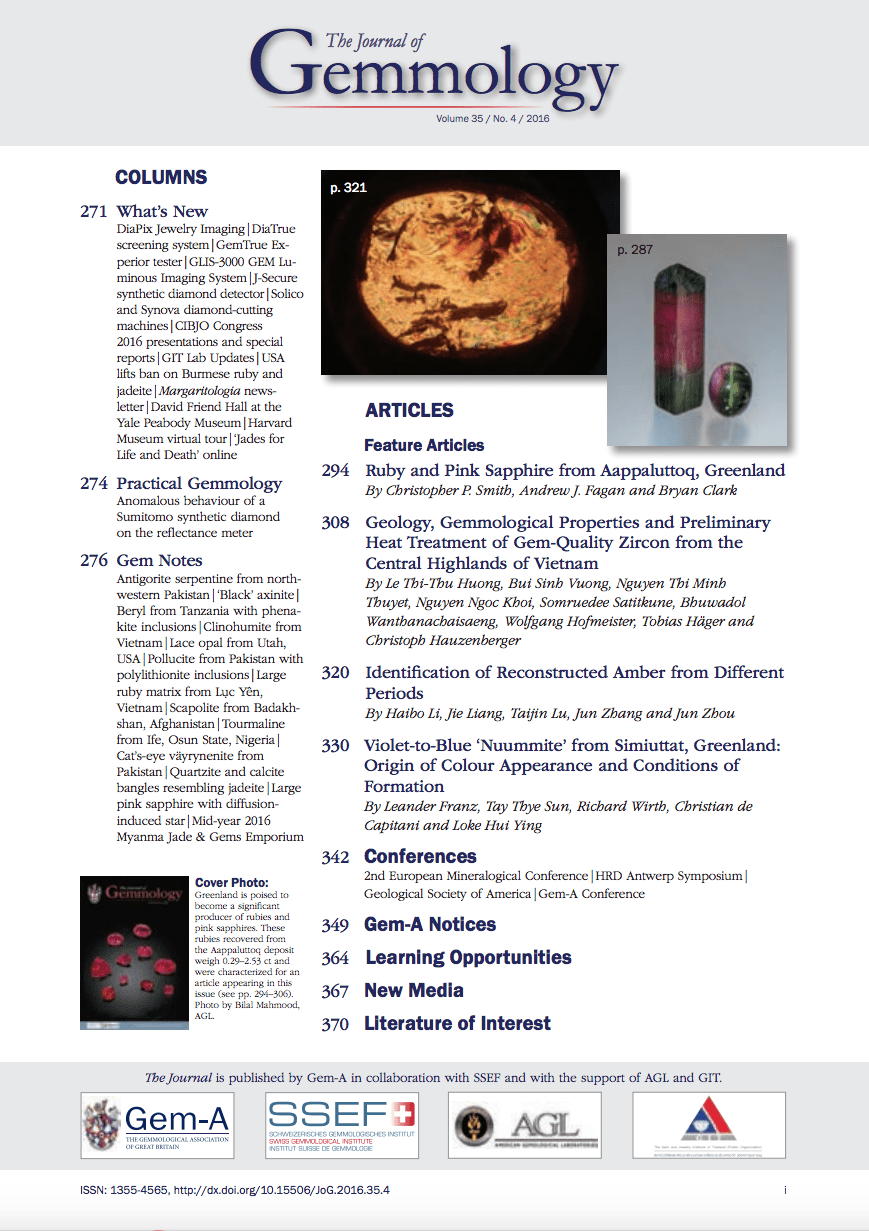 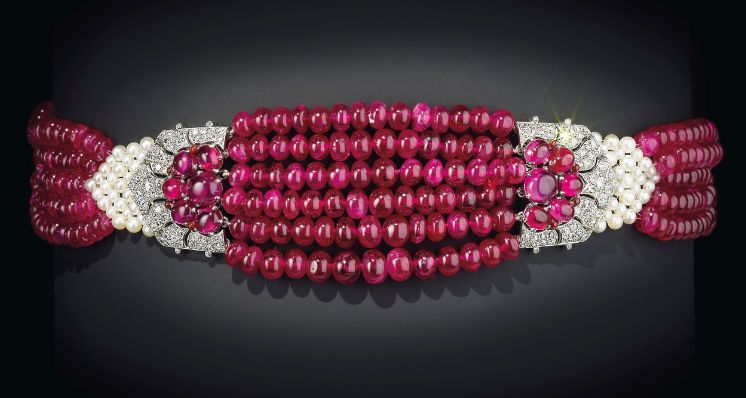 Those born in July can call the resplendent ruby their birthstone. To find out more about this historically significant and commercially successful gemstone, we asked Gem-A tutor Lily Faber FGA DGA EG to share her insights.

The ruby slippers, a ruby red apple, ruby red lips… for those interested in gems and jewellery, and even those who aren’t, rubies are synonymous with a rich red hue.

What many don’t know is that the ruby is a member of the corundum gem species, along with sapphires, the difference being colour and the elements responsible for that colour. Rubies are specifically red and coloured by chromium, while sapphires have more flexibility with their colours (including blue and any other colour aside from red). The most valued is sometimes referred to as ‘pigeon’s blood’ – a deep, rich red that is seen to be the purest iteration of the colour.

It is believed in some cultures that rubies bring prosperity and protection to those who wear them. Rubies are also the stone of passion and are often associated with love. It has even been said that rubies should be rubbed onto the skin to promote and restore youth.

Due to their colour, rubies were often connected to blood and the idea of a ‘life force’, which is one of the many reasons they were worn by warriors to, allegedly, make them unstoppable in battle.

Historically, all red gemstones were called a ruby until the late 18th century, when gemmology developed as a science and people were able to distinguish between various species of red stones. In fact, some of the most famous rubies, including the Black Prince’s Ruby and the Timur Ruby in the British Crown Jewels are red spinel.

Where are Rubies Found? 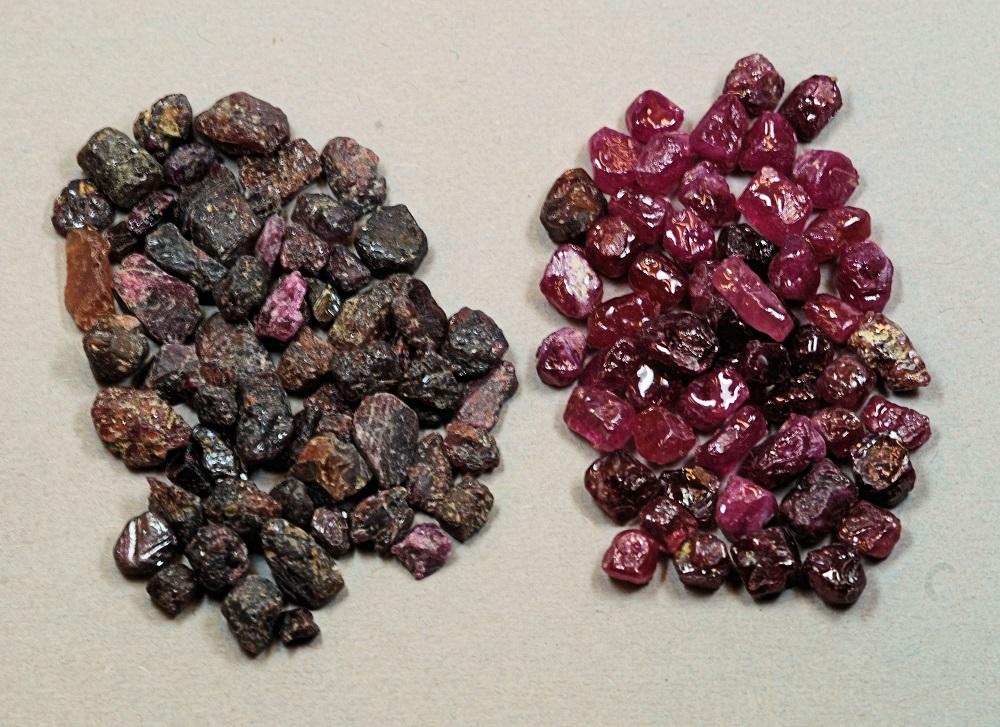 Ruby before (left) and after being heat treated.

These locations have quite distinctive inclusions that may aid identification; however these inclusions can also frequently be seen in gemstones from other localities such as Australia, Kenya, Namibia, Madagascar, India, USA, Russia, China and Nepal, and are therefore not diagnostic.

The most common crystal habit for a ruby is a flat, tabular hexagonal shape that can either be sharp or rounded at the edges. There may be raised, triangular growth marks on the top or bottom pinacoids of the crystal, as well as some lamellar twinning lines on the sides of the crystal. These are distinctive crystals and can be readily recognised. Twinning occurs when a crystal changes its direction of growth during formation, either one or multiple times.

Rubies can contain a large variety of inclusions. These can be crystals, feathers (partially healed internal fractures), silk (long, thread-like rutile inclusions), evidence of the lamellar twinning in the form of twin planes, and hexagonal colour-zoning. Silk, which forms in three directions at 120 degrees, can cause an optical effect known as asterism (a bright star shape that appears in the stone), which is highly valued in natural rubies. 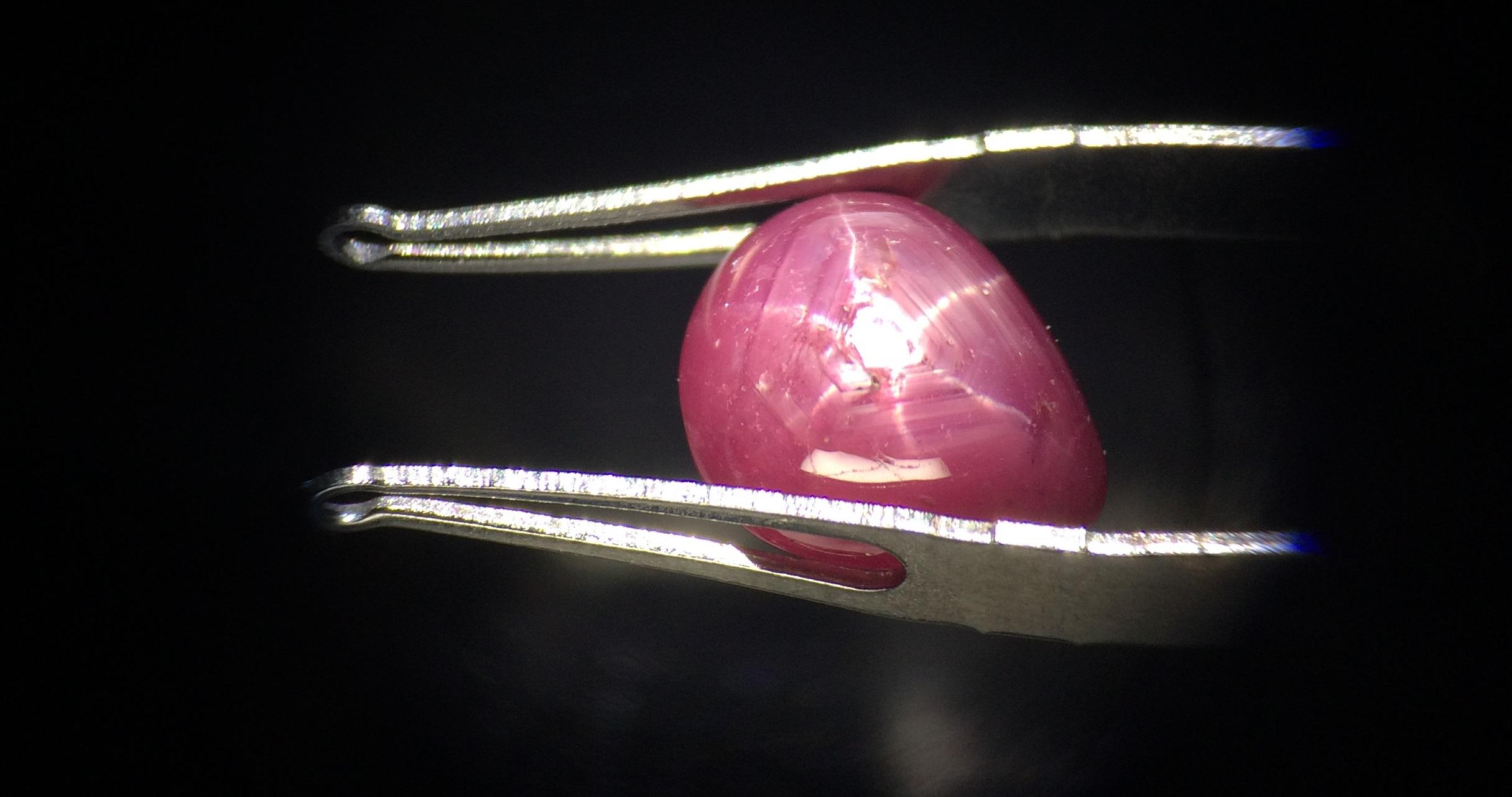 You can often tell if a ‘star-ruby’ is a natural one as opposed to a synthetic one because the star is not always centred, the arms of the star are slightly crooked or diffuse, and the cabochon has a rounded or deep base to preserve yield, therefore raising the price of the stone.

The most common treatment to corundum as a whole is heat treatment to enhance or remove colour. For rubies, brown and blue tones are often removed by this method. Additionally, it is important to watch out for rubies that have been fracture-filled with lead glass to improve colour and clarity. This treatment is becoming more and more prevalent, so caution is advised when buying rubies.

The lead glass leaves tell-tale signs, however, so look for surface-reaching fractures, a difference in surface lustre between the glass and the ruby, and a blue flash within the ruby as well as bubbles, both of which are confined to the fractures inside of which the glass sits. It is not advisable to heat these rubies as the lead glass has a low melting point and will leak out of the stone. 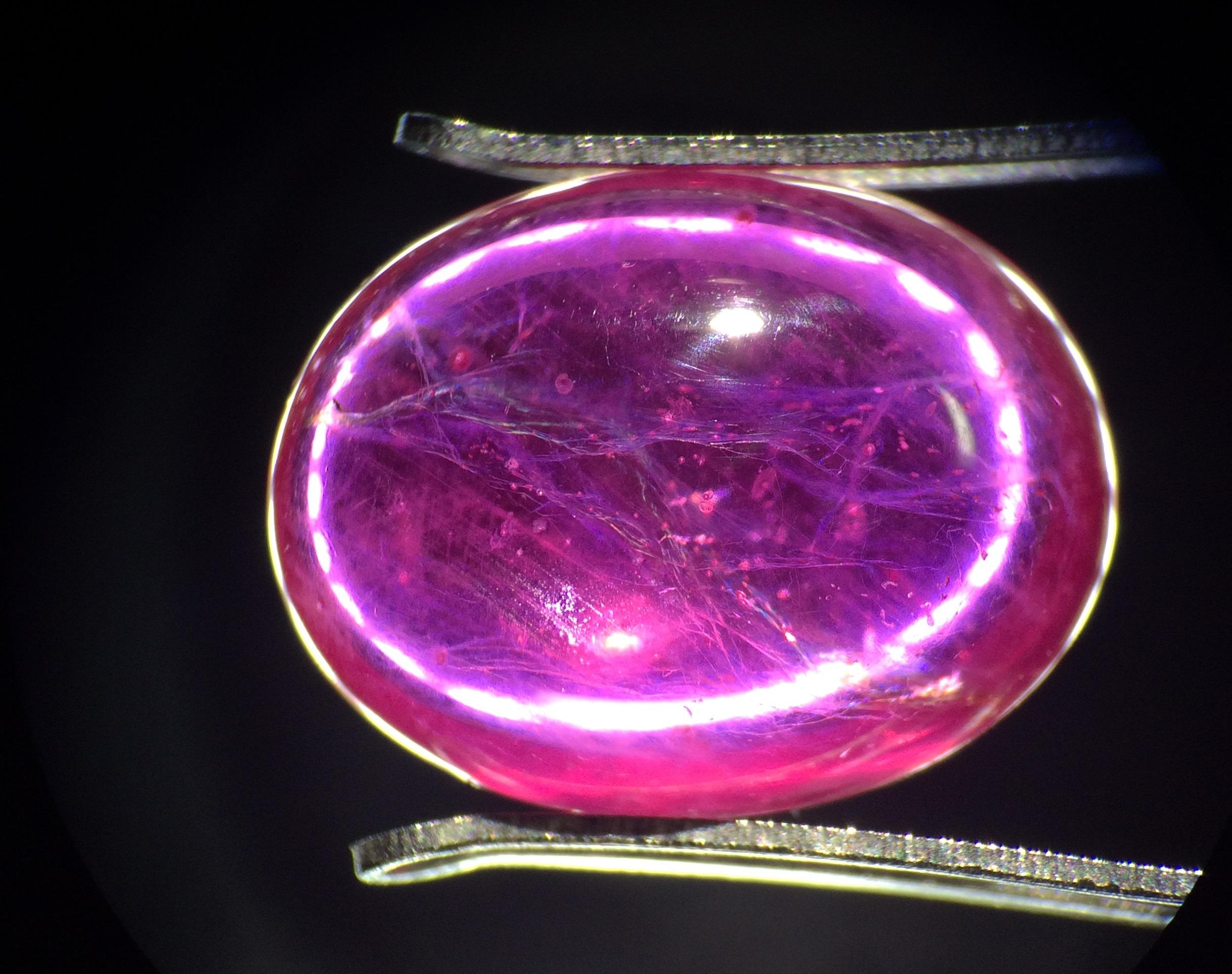 Flashes and cracks in a glass filled ruby.

Rubies are comparatively hard at 9 on the Mohs scale of hardness, second only to diamonds with a hardness of 10. They are excellent stones to set in jewellery due to their ability to resist scratches as well as any chemical attack. It is not advisable, however, to put them in an ultrasonic or steam cleaner, especially if the stone is fractured or has been lead-glass filled.

Rubies are a historic gem, considered to be the gem of royalty. Whether you appreciate them for their colour, multitude of inclusions, or their stature within the gem community, they are a worthy addition to anyone’s jewellery box, especially if you were born in July.

If you would like to receive copies of Gems&Jewellery and The Journal of Gemmology please visit Membership.

Cover image: The Patiala Ruby Choker created by Cartier in 1931 and recently sold by Christie's. This exceptional piece, once part of the Al-Thani Collection, was commissioned by Maharaja Bhupinder Singh of Patiala, one of Cartier’s most important Indian clients of the 1920s and 1930s. Image courtesy of Christie's.