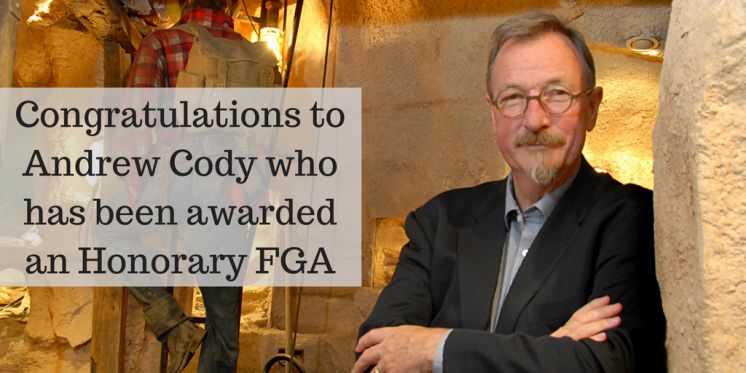 Gem-A is thrilled to announce that Andrew Cody, founder of leading Australian opal company, Cody Opal, has been awarded an honorary FGA in recognition of his exceptional services to gemmology and the wider industry.

Cody was named the recipient of this special recognition at the annual Gem-A Conference 2017, which took place from November 4-5 in London. His achievements were honoured by Gem-A CEO Alan Hart, before he was invited on stage to accept and share his thoughts with Conference visitors and delegates.

Cody started collecting fossils, minerals and gemstones at just 12 years of age. He began cutting opal in 1964 after a school excursion to Coober Pedy, in northern South Australia, more than 800km north of Adelaide. In 1971, he established a wholesale opal and gem-cutting business, which expanded to include exporting to Europe, Japan and the United States.

Cody is also a successful author, having written 'Australian Precious Opal – a Guide Book for Professionals'. In 2010, Cody and his brother Damian published a second book, 'The Opal Story', which is now available in six languages with more than 50,000 copies in circulation.

Cody is the joint founder and director of The National Opal Collection (NOC) with showrooms and museums in both Sydney and Melbourne. His opalised fossil collection is particularly impressive, and includes a 2.5 metre opalised pilosaur, and the opalised upper jaw of a rare Mesozoic mammal. This passion for collecting is accompanied by a strong business sense, leading to both of Cody’s businesses being awarded Government Export and Tourism Industry accolades. Additionally, he has a Gold Commendation from the Lord Mayor of Melbourne, is an honorary fellow of the Gemmological Association of Australia and is a research associate of The Australian Museum.

Most recently, Cody has been working with a number of organisations on a review of opal classification. His goal is to create a universal system throughout the world gemstone community. In order to achieve this goal, he has put together 50 master reference sets for use in education and laboratories. These comprehensive sets contain 215 opal specimens in each.

When he’s not championing opals, writing, sourcing or working in the trade, Cody enjoys sharing his 50-year passion for opals at regular speaking engagements.

Cody commented: "When I was told of the nomination, I was overwhelmed and in fact I still am. I never considered myself deserving of this honour, and feel there would be many more that are better qualified! But it is with gratitude that I accept this important award from the world’s oldest gemmological institution.

"I am fortunate that my early interest in rocks and fossils grew into a hobby that also earned me a living throughout my life. It was about discovering treasure buried in the earth, outback adventures, travel and basically having fun. I loved being my own boss and, after all, who would employ me? So after all these years, I am still pursuing my hobby!

"The opal gemstone is amazing in that is has links to many areas of science; this has led to my collection of opalised fossils, pseudomorphs and related opal specimens from around the world."

He concludes with a spark of humour: "I don’t suppose you know anyone who wants to sell me a meteorite with opal, do you? I wonder if one day they will find evidence of bacteria preserved in opal on Mars?"

Tagged under
More in this category: « Turkish Designer Özlem Tuna Named Gem-A’s Gem Empathy Award Winner at IJL 2017 Gem-A's Gem Empathy Competition 2019 Now Open for Entries »
Tweet
Become a Gem-A Member
Apply to become a Gem-A Member
Subscribe to our Newsletter
Keep updated with Gem-A
Sign Up
Get in Touch
Can't find what you're looking for?
Contact Us