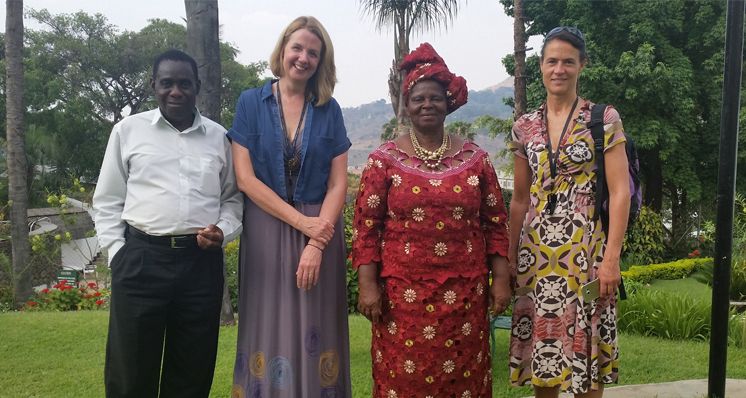 Deborah Craig FGA DGA, head of the Africa Team at International Women in Mining (IWIM) and board member within the organisation, reports on her recent trip to Malawi.

Peaceful, democratic Malawi remains one of Africa’s least-developed countries. Yet this small landlocked place, affectionately known as ‘The Warm Heart of Africa’, sits within the Mozambique Belt, surrounded by its famous gemstone-producing neighbours: Tanzania, Zambia and Mozambique.

What is Malawi’s potential to join their ranks as a source of some of the world’s most beautiful coloured gemstones? Can Malawi’s nascent gemstone industry create prosperity for the country? In autumn 2016, Andrea Antonucci FGA and I travelled to Malawi to visit the Chimwadzulu Hill sapphire and ruby mine and meet with members of the local gemstone community. We began in Blantyre with John Chikokoto, the president of the Gemstone Association of Malawi (GAM). GAM was re-energised in 2015 with funding from the World Bank’s ‘Mining Governance and Growth Support Project’.

There is even a rumour that kimberlite has been discovered near the Mozambique border, but much of what we hear is merely speculation. The bulk of rough material is immediately exported out of Malawi, often illegally. Unlike Tanzania, Zambia and Mozambique, Malawi does not have a value-addition strategy, which would ensure more gemstones were processed in-country. He tells us if the gemstone industry is to grow, develop and provide long lasting economic benefits, his members need skills training at all stages of the value chain - mining, valuation, lapidary and marketing.

These sentiments are echoed by Hellen Chasowa, regional chairperson south for Malawi’s Women in Mining Association (MAWIMA). GAM has around 2,000 members, of whom approximately 800 are women and also members of MAWIMA. Attracted to gemstone mining and dealing as an alternative to subsistence agriculture, which occupies most Malawians, MAWIMA’s members would also like to add value to the stones they are mining to increase their incomes and develop sustainable livelihoods. They are seeking project sponsorship for a tumbling machine and a drill, to make beads and create jewellery for Malawi’s burgeoning tourist trade.

They would like the Nyala brand to equal quality, trust (disclosure of treatments) and social responsibility. The last is of critical importance when engaging with the economically disadvantaged communities close to the mine. Nyala works together with community leaders to understand how best to provide local support. To date, Nyala has built new school blocks, constructed boreholes for wells and upgraded the local health clinic.

Chimwadzulu Hill is an eluvial corundum deposit discovered in 1958 about 145 miles south of Lilongwe, Malawi’s capital. The heavy minerals have been eroded by in-situ weathering and scattered down the sides of the hill, like sprinkles on top of an ice cream cone.

The presence of both chromium and iron mean that corundum is found here in a rainbow of colours: pale green, blue and yellow sapphires, but rubies and padparadscha sapphires are also found here.

Over the years, the government, as well as various investors, have mined the deposit with varying degrees of success. In 2008, Nyala Mines Ltd acquired Chimwadzulu Hill, but the financial crisis, combined with rampant theft and high operating costs forced the mine to close. In 2013, Malawian national Abdul Mahomed acquired 80% of Nyala Mines Ltd bringing new life to the mine. Columbia Gem House, which had partnered with previous owners, reaffirmed their commitment to cut and market the stones.

Chimwadzulu Hill is primarily a low-grade (in terms of carats per tonne) sapphire deposit; the rubies and padparadschas are a welcome bonus. The key to ensuring the mine’s profitability is to increase the volume of ore excavated and processed, thereby bringing down the mine’s operating cost per tonne.

The current plant processes 30 tonnes of ore per day. Mr Mahomed would like to increase production significantly to 1,000 tonnes of ore per day. The new plant and equipment has been ordered and an environmental impact assessment has been filed, pending government approval. An increase in production will also hasten the removal of the overlying secondary deposits, hopefully exposing the primary source of corundum that Mr Mahomed believes lies below.

It is time for Malawian gemstones to take their rightful place among the most beautiful gemstones in the world, while providing economic opportunity to Malawians. For this to happen, it is critical that the Malawian government implements value-addition strategies that ensure more rough material stays in-country to be cut and fashioned. There will be challenges, but small steps in skills training and market development can be taken at the local level, through associations such as GAM and MAWIMA, supported by Malawian and international partners. Nyala and Columbia Gem House have shown that operating in an ethical manner creates important benefits for local communities, as well as making good business sense.

Deborah Craig would like to acknowledge the financial contribution of the Swedish Gemmological Society who helped make the trip possible. ■

Tagged under
More in this category: « How to Assess the Value of an Opal: A Beginner's Guide to Pricing The Myths, Legends and Controversy Behind Ancient Preseli Bluestone »
Tweet
Become a Gem-A Member
Apply to become a Gem-A Member
Subscribe to our Newsletter
Keep updated with Gem-A
Sign Up
Get in Touch
Can't find what you're looking for?
Contact Us