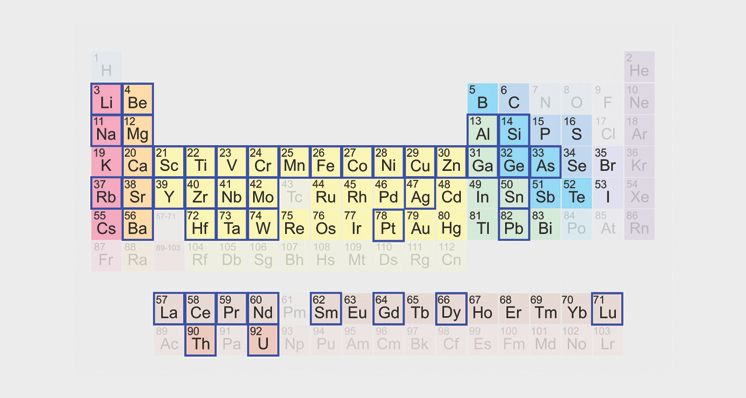 Gem testing has evolved into an advanced materials science using sophisticated instrumental technologies for detailed chemical and structural analyses. The chemical analysis of gem materials allows identification of synthetics and treatments. Trace-element analysis is useful to identify the geographical origin of high-end stones. When the origin of a stone has a significant impact on it’s value, the cost associated with this technique may be  justified.

How does LA-ICP-MS work?

The LA-ICP-MS analysis process can be thought of in two main parts: material sampling i.e. Laser Ablation (LA) and chemical analysis i.e. Inductively Coupled Plasma Mass Spectrometry (ICP-MS). A tiny, nearly invisible ablation pit is caused by the laser, into the girdle of the gemstone. There will be minimal damage as the laser vaporises only a microscopic amount of the sample for analysis. It nebulizes the material and the aerosol produced is transferred in a gas stream to an ICP-MS for elemental and/or isotopic analysis. An ICP-MS combines a high-temperature Inductively Coupled Plasma (ICP) with a Mass Spectrometer (MS).   The ICP is an ionisation source where the energy is supplied by electric currents, which ionises the atoms. These ions are then separated based on their mass-to-charge ratio (m/Q) and detected by the MS.

What is LA-ICP-MS used for?

LA-ICP-MS is recognised as one of the most important spectrometric techniques and has been used in gemmology for quantitative chemical analysis. It provides data that can be used to create chemical fingerprint diagrams for geographical origin determination.

There are multiple varieties of ICP-MS instruments, which use different mass-separation schemes in analysis. Of these the ICP-Q-MS, which uses a quadrupole is the most popular. The quadrupole is a mass filter. The quadrupole consists of four cylindrical rods arranged so that the ionised sample travels down the centre. Depending on the electro-magnetic field of the rods, the trajectory of the ionised particles is affected, with selected ionic weights based on the m/Q being filtered out and the ions of interest reaching the MS detector. The ability to filter ions on their m/Q allows ICP-MS to supply isotopic information. Different isotopes of the same element have different masses.

What are the limitations of ICP-Q-MS?

The user of this technique has to define a preselected list of isotopes. Isotopes are sequentially measured one at a time, the ‘limited’ sample volume is divided (segmented) between all measured isotopes, thereby drastically reducing the effective sensitivity if many isotopes are monitored.

What are the capabilities of ICP-TOF-MS?

ICP-TOF-MS is one of the latest and most advanced technologies in the ICP-MS family. Time-Of-Flight (TOF) uses the principle that the ‘flight’ duration for one ion passing through a fixed flight tube is related to its m/Q.  Lighter ions take less time to travel the same distance compared to their heavier counterparts with the same charge, provided they have identical kinetic energy, therefore achieving mass separation. ICP-TOF-MS acquires spectra from the lightest to the heaviest isotopes at a higher speed as well as achieving a better resolving power than conventional Q-MS. It ‘snaps pictures’ of the full and continuous mass spectrum without the need to assign isotopes of interest. Such a spectrum reveals almost the full elemental composition, reaping the benefits of the robust plasma source and there is no need to re-ablate the stone due to an incomplete or ‘badly’ chosen predefined list of isotopes.

What practicalities are there to consider with ICP-TOF-MS?

Due to technical limitations the ICP-TOF-MS model described in this article cannot measure light isotopes while maintaining a high sensitivity for heavy isotopes. It takes two measurements to complete the full elemental analysis from Lithium to Uranium. Limit of detection (LOD) values range from single-digit parts per billion (ppb) for heavy elements to low parts per million (ppm) for light elements. TOF-MS provides better LOD than Q-MS. TOF-MS collects all information in the full mass spectrum with no information loss.

What are the potential applications?

The possibilities of the technique will enhance applications such as trace-element characterisation of gemstones and pearls for origin determination and treatment detection, and will open new research opportunities for age dating, inclusion studies and high-spatial-resolution chemical mapping of gems.

The new instrument is called GemTOF and was installed at SSEF in July 2016. ■

To find out more information about this exciting technique visit GemTOF

Tagged under
More in this category: « Identifying Reconstructed Amber versus Natural Amber 5 Things to Consider before Starting the Gem-A Gemmology Foundation Course »
Tweet
Become a Gem-A Member
Apply to become a Gem-A Member
Subscribe to our Newsletter
Keep updated with Gem-A
Sign Up
Get in Touch
Can't find what you're looking for?
Contact Us