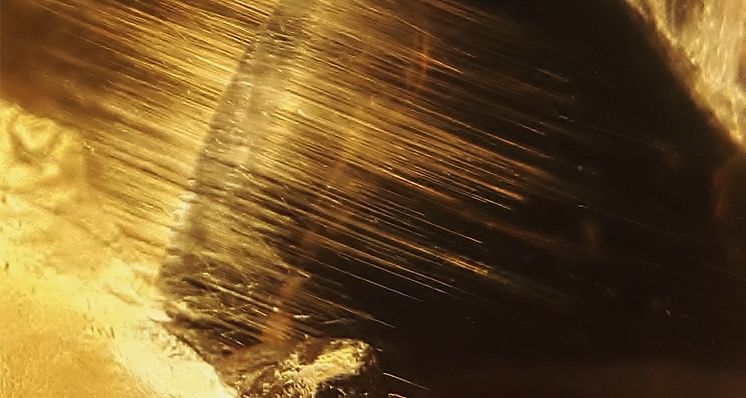 Danburite is a calcium borosilicate, CaB2Si2O8, belonging to the orthorhombic crystal system. It is genetically associated with rocks of magmatic (granite pegmatite), metasomatic (skarn) and sedimentary (evaporite) origins. 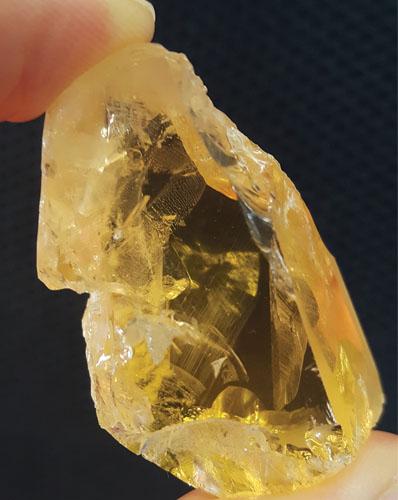 What about metamorphism, marble and pegmatites?

When rocks change because of an increase in the pressure and/or temperature of their surroundings, it is called metamorphism. Marble is a metamorphic rock primarily composed of calcite, formed when limestone is subjected to heat and pressure. Pegmatites are igneous rocks. Igneous rocks are formed through the cooling and solidification of magmas. Pegmatites contain extremely large crystals and rare minerals. Most pegmatites have a composition with abundant quartz, mica and feldspar.

The Rare-Element Classes are subdivided based on composition into LCT type (Lithium, Cesium, and Tantalum enrichment) and NYF type (Niobium, Yttrium, and Fluorine enrichment). The Rare-Element Class if further subdivided into types and subtypes according to mineralogical/geochemical characteristics. Many pegmatites fall nicely into these categories but some of the Madagascan pegmatites are virtually unique and don't fit into these categories.

Luc Yen is a mountainous district located in the north of the Yen Bai providence in Vietnam. Ruby, sapphire and spinel have been recovered from primary and secondary deposits since 1987 in the Luc Yen area. The geology of Luc Yen is dominated by metamorphic rocks - mainly granulitic gneiss, mica schist, and marble - that are locally intruded by granite and pegmatitic dykes.

This paper is an updated description of the inclusions in danburite from Luc Yen, which were characterised by optical means and by micro-Raman spectroscopy. The original source rock type for this alluvial danburite is then proposed, according to information provided by the study of the inclusions.

Internal features in Vietnamese danburite consist of fingerprints, hollow tubes, and two-phase and multiphase fluid inclusions. The two-phase inclusions were typically composed of a liquid and a vapour bubble that showed various proportions, suggesting heterogeneous entrapment of the dominant fluid during crystal growth. 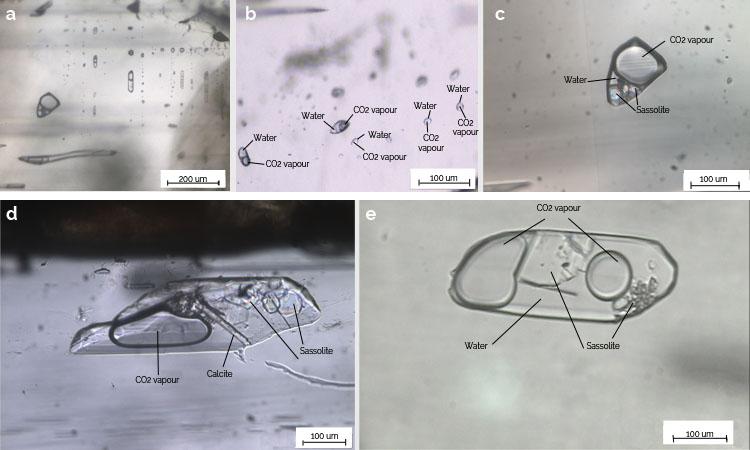 In Raman spectroscopy the studied sample is illuminated with a monochromatic laser (single wavelength), the light is scattered by the sample. Light scattered from the sample is due to either elastic collisions of the light with the sample's molecules (Rayleigh scatter) or inelastic collisions (Raman scatter). Raman scattered light returns from the sample at different frequencies that are proportional to the vibrational frequencies of the bonds of the molecules in the sample. The Raman scattering from every molecule is different as the bonds for every molecule are different.

A Raman spectral 'fingerprint' can be generated. A database of reference spectra is necessary as the identification of a mineral by Raman spectroscopy is a comparative method. Raman spectrometry is useful to identify gems, inclusions and filling substances in gemstones.

Sassolite H3BO3, crystalline boric acid has been described for the first time as an inclusion in gas-liquid inclusions in minerals from the pegmatite veins Mika and Amazonitovaya in the Kukurt gemstone district in Central Pamir in 2000 (S.Z. Smirnov et al.). The crystals were rounded, tabular and less frequently idiomorphic with low refractive indices and high birefringence. The Raman spectrum of sassolite revealed an intense line near 880 cm-1 and a weaker one at 449 cm-1. The data obtained allowed reconstructing the conditions of formation of both granite pegmatites and hydrothermal systems where boron actively participated in mineral formation. Sassolite is a characteristic component of fluid inclusions in minerals from the majority of tourmaline-bearing and topaz-beryl miarolitic pegmatites.

Raman spectroscopy of the multiphase inclusions in the danburite samples revealed that most of the crystal inclusions were sassolite with occasional crystals of calcite. The sassolite showed two distinct bands at 500 and 880 cm-1 and two additional bands at 3165 and 3247 cm-1. The 500 and 880 cm-1 bands are assigned to vsB[3] -O species, where B[3] -O denotes three-coordinated boron. The calcite was characterised by two strong bands at 1088 and 283 cm-1 and a less-intense band at 714 cm-1.

The doublet at 270- 300 cm-1 in the Raman spectrum of the calcite might result from a combination of the intense calcite band at 283 cm-1 with the two nearby danburite bands (~281 and 296 cm-1). The liquid and vapour phases were identified by Raman spectroscopy as H2O and CO2, respectively. The spectrum of CO2 in the danburite fluid inclusions shows two diad peaks positioned at 1285.1 and 1388.3 cm-1. The diad split (known as the Fermi doublet) corresponds to low-density values, which points to a granitic pegmatite source rock for the danburite.

The various proportions of a carbonic vapour phase (CO2) compared to a liquid phase (H2O) indicate a heterogeneous entrapment of the fluid inclusions. This suggests that the associated sassolite and calcite precipitated as a result of decreasing temperature through hydration reactions with the host danburite. The presence of sassolite together with low-density H2O - CO2 fluid inclusions indicates the Luc Yen danburite originated from a granitic pegmatite source rock.

This is a summary of an article that originally appeared in The Journal of Gemmology entitled ‘Sassolite- and CO2-H2O-bearing Fluid Inclusions in Yellow Danburite from Luc Yeb, Vietnam’ by Le Thi-Thu Huong, Kurt Krenn and Christoph Hauzenberger 2017/Volume 35/ No. 6 pp. 544-549

Tagged under
More in this category: « Glass Simulants of Gems and Enhancement of Natural Gem Materials in the 16th Century An Update on Identification Features of Treated Baltic Amber »
Tweet
Become a Gem-A Member
Apply to become a Gem-A Member
Subscribe to our Newsletter
Keep updated with Gem-A
Sign Up
Get in Touch
Can't find what you're looking for?
Contact Us