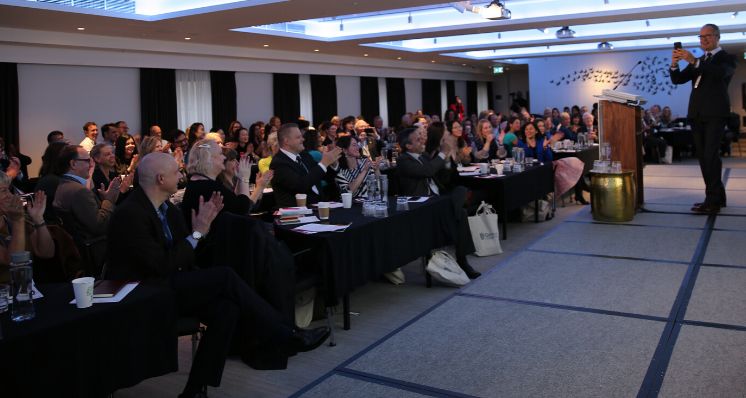 The Gem-A Conference is always the highlight of our gemmological calendar! We love the opportunity it brings to learn about the latest research and developments in the gemstone industry, network with old and new friends and enjoy being in the company of fellow gem enthusiasts from across the world.

If you didn’t manage to make it, we’ve put together a few of the highlights from this year’s event to fill you in on what you missed, and whet your appetite for Gem-A Conference 2020!

Day One of Conference: Saturday

On Saturday we kicked off our Conference at etc.venues, County Hall, London with a breakfast and welcome from Gem-A CEO Alan Hart before settling down to our first presentation of the weekend, where Charlton August spoke to us about the Namibian diamond mega-placer – which has produced 107 million carats of diamonds since 1908 – and the positive effects and prospects of diamond mining in the Namibian town of Oranjemund and beyond.

The second talk of the day, ‘The Many Facets of Tourmaline: From Gemstone to Geologic Recorder’ came from Professor Barbara Dutrow, who took us through the gem’s unique chemical structure, told us how Paraiba tourmalines acquire their distinctive neon blue colour and explained how studying a tourmaline specimen’s composition can enable us to determine its host-rock provenance.

Professor Barbara Dutrow taking us through 'The Many Facets of Tourmaline'

Rachel Dery GG continued our Saturday session with a presentation which explained the work of Gem Legacy, a 501(c)3 non-profit organisation which is dedicated to giving back to mining communities in East Africa through facilitating education, vocational training and empowering local economies.

Rachel talked us through some of the inspirational success stories of the organisation’s work and the positive impact it has left on many individuals and communities, in addition to explaining how businesses working in the gem and jewellery trade can get involved in this fantastic initiative.

After some wonderful food, networking and perusing of our sponsors’ and spaekers’ tables which included JTV, Crown of Light, Gemworld International and Marcus McCallum FGA’s array of stunning gems, we sat down for a presentation on ‘Diamonds and the Origins of Oceans’ from Professor Fabrizio Nestola. Professor Nestola’s very entertaining talk gave us an overview of super-deep diamonds and encouraged us to appreciate diamonds and their inclusions for their unique ability to help us decipher the earth’s core.

Professor Fabrizio Nestola delving deep within the Earth's core to discuss super-deep diamonds and the origins of oceans.

Closing Day One of this year’s Conference was Nathan Renfro FGA, who took us on a ‘Microscopic Exploration of Gemstones’ featuring some of his own incredible photographs and photomicrographs of particularly special gems and diamonds.

Nathan Renfro FGA taking the audience on a 'Microscopic Exploration of Gemstones'.

Mr Renfro showed us how some gemstones which look fairly ordinary on the outside can reveal an extraordinary interior. One particularly arresting image was of the ‘Aurora Borealis Iris Agate’, a photograph of an iris agate specimen with inclusions which appeared like the northern lights over a frozen lake and forest, which attracted awe and admiration from across the audience.

Saturday Evening at the House of Commons

The Gem-A Conference is never complete without our much-anticipated Saturday evening dinner, which this year was held in the grand and atmospheric surroundings of the House of Commons! This year’s dinner sold out in record time and proved a hugely popular choice amongst attendees. Some of our guests also had the chance to attend a tour of the Houses of Parliament before dinner.

Along with enjoying a three-course meal in the Strangers’ Room, we also presented our annual raffle with prizes donated from our sponsors and speakers. All proceeds from this year’s raffle were donated to Gem Legacy to help fund their brilliant work with mining communities in East Africa.

We were welcomed back at etc.venues County Hall by Alan Hart before diving into the first presentation of the day with Anette Juul-Nielsen who discussed ‘Gemstones of Greenland – Prospectivity and Current Mining’.

Anette Juul-Nielsen introducing us to the gemstones of Greenland.

Ms Juul-Nielsen’s talk explained the diverse geology of Greenland alongside some amazing images of the Greenlandic geological landscape. We also discovered the huge range of gemstones native to Greenland, as well as the considerable potential for more gems to be found with future exploration.

Shortly after, we heard from Richard Drucker FGA (Hons) who delved into ‘Market Trends, Issues and Challenges’ in the gem trade. Mr Drucker informative presentation addressed gem industry issues such as inconsistency in nomenclature, lab-certification issues and challenges, one of the most significant being the identification and pricing of lab-grown diamonds.

Rui Galopim de Carvalho FGA DGA brought us a fascinating talk entitled ‘Brazilian Diamonds: A Historical Review’, which investigated the initial discovery and history of diamond mining in Brazil and explained how the influx of diamonds into Europe via Portuguese merchants had a huge and lasting influence on jewellery design in Portugal and beyond.

John Bradshaw discusses the 'other 175' rare yet desirable gemstones.

For our penultimate presentation of the weekend lapidarist and gem wholesaler John Bradshaw spoke to us about ‘Rare Gemstones: The Other 175’. This insightful and interesting talk took us on a tour through the key features of some of the ‘other 175’ gemstones which are not so commonly seen in the jewellery market yet are highly desirable. Some memorable stones were the very rare benitoite, a stunning blue gem, crocoite – a gem composed of very fragile, monoclinic crystals often appearing in a vivid red – and taafeite, a relatively hard gemstone first discovered in 1945.

The closing talk of the Conference was delivered by Dr Laurent Cartier FGA, who discussed ‘Diving for Diamonds in Sierra Leone’. During this presentation we heard about the history of diamond mining in Sierra Leone along with this very rare form of artisanal diamond mining, which involves diving in the Sewa River with very little apparatus, and sifting through huge amounts of gravel manually.

Dr Cartier’s presentation included a short film where we saw the miners themselves speak of the difficulty of this kind of mining as well as the unrelenting hope that they will find a life-changing specimen one day.

The Workshops and Trips

But the fun of Conference didn’t end on Sunday! We extended our weekend of gemmological education and discussion into Monday, with four practical workshops based at Gem-A HQ.

We rounded off our 2019 Conference activities with private trips to three of London’s most famous museums. Starting bright and early at 8.00 AM our first trip took place at the Tower of London where attendees had an exclusive private viewing of the Crown Jewels.

Those attending the Natural History Museum trip went behind the scenes and explored some very special specimens in the gem and mineral gallery, while participants on the V&A Museum trip got the chance to handle and discover the history behind some incredible examples of Indian Jewellery.

We are delighted that Gem-A Conference 2019 was a huge success and that so many of our attendees enjoyed it as much as we did!

All of the team at Gem-A had a fantastic time across the four days and we cannot wait to see you all again next year. Until then, keep an eye on the Events page on our website as well as our social media channels to keep up-to-date with our upcoming activities!

Interested in becoming a Gem-A Member? Take a look at our Membership page.

Want to expand your knowledge on gemmology? We have a host of gemmological workshops planned for over the coming year. Find out more here.

Tagged under
More in this category: « Gem Highlights of Goldsmiths' Fair 2019
Tweet