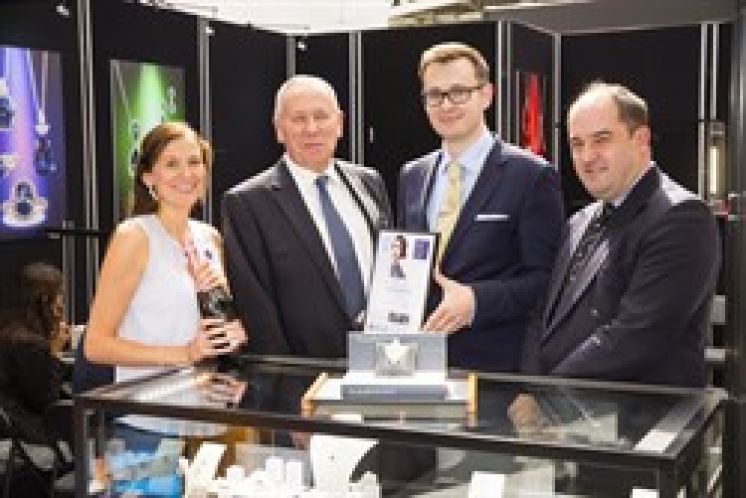 The Gemmological Association of Great Britain (Gem-A) has announced the winner of this year’s Gem Empathy Award as P J Watson. The Hertfordshire-based designers, manufacturers and wholesalers of fine diamond and gem set jewellery were awarded the prize for their stunningmulti-purpose tourmaline and diamond, peacock feather brooch in 18ct white gold, created especially for the IJL show.

Gem-A’s Gem Empathy award is presented annually on the last day of IJL to the exhibitor displaying, in the opinion of the judges, a single piece or collection of jewellery that makes captivating use of one or more gemstones and provides accurate ethical descriptions as well as displaying creativity and imagination.

The winner, selected by a panel of judges from Gem-A, was designed by John Watson of P J Watson. Family jewellers with four generations of FGA members amongst their ranks, Watson’s never fail to impress with their statement pieces created especially for each annual IJL show and this year was no different. The winning piece was created with a centre 23.81ct tourmaline and 3.94ct of G VS diamond in an 18ct white gold mount and awarded the prize for a completely original use of coloured stones in a stunningly beautiful design with all stone sources disclosed.

On receiving the news of their selection for the award, John Watson FGA DGA said: It is a great honour to receive the Gem A empathy award, especially with this being my first brooch design. We are well known for our traditional classic styles and it is fantastic to be recognised for one of our new modern designs.

Gem-A CEO James Riley commented on the winning piece, saying: “P J Watson has always come to IJL with a magnificent centrepiece that really shows off what they do best: designing and manufacturing majestic pieces of jewellery combining some of the finest gems and diamonds. This year’s statement piece really set the mark in terms of the Gem Empathy award, as it combined beautiful diamond and tourmaline in a completely original design. As a humble family jewellers they have also continued a long tradition of training with Gem-A – with four generations of FGA and DGA members in the family. Not only that, P J Watson continue to showcase some of the best of British design and are continuous contributors to the British jewellery industry in this respect. It’s for these reasons we thought P J Watson are deserved winners of this year’s Gem Empathy Award. Congratulations to the whole team on your success, you’ve earned it!”

As winners P J Watson win a free full-page advert in an upcoming issue of Gems&Jewellery as well as a free one-day workshop or attendance for one delegate at the Gem-A Conference 2014.

For more information about Gem-A and the Gem Empathy Award, you can visit the Gem-A website via: www.gem-a.com