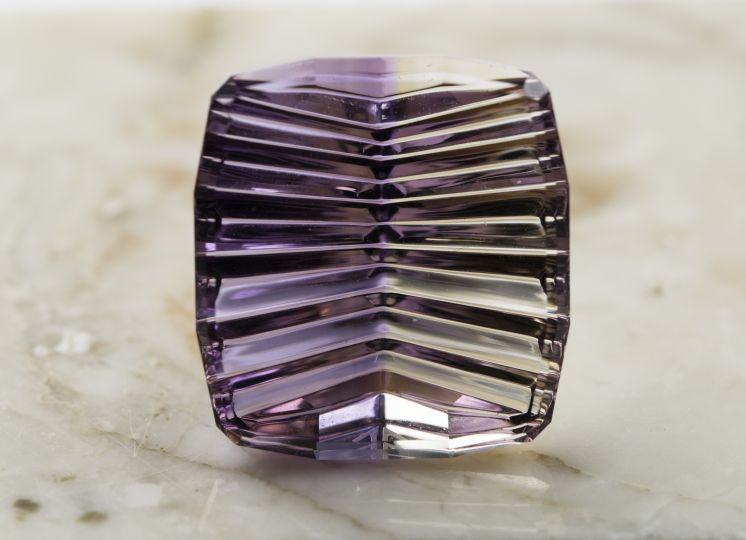 International Jewellery London (IJL) is pleased to announce the return of Gem-A’s Gem Empathy Award, which gives IJL 2018 exhibitors the chance to win a spectacular, fancy-cut gemstone for a bespoke jewellery design.

In a change to previous years, the long-standing Gem Empathy Award – organised by Gem-A (Gemmological Association of Great Britain) and hosted by IJL – will welcome entries from the entire breadth of IJL 2018 exhibitors, not just Design Gallery exhibitors.

All those who enter the competition, whether an established brand or emerging designer, will have the opportunity to win a sensational 18.28 carat ametrine gemstone from Bolivia, which has been hand-cut by master gem-cutter, John Dyer.

To be in with a chance of winning, exhibitors are tasked with creating a hand-drawn design or CAD render. The one that showcases the ametrine gemstone in the most innovative and
imaginative way wins the Gem-A Gem Empathy Award – walking away with the gemstone in the process.

This year’s gemstone was hand-chosen by the Gem-A team and features Dyer’s signature Dreamscape cut. Those who look closely at the gemstone will also notice Dyer’s ‘JD’ mark engraved onto its surface. Entries will be judged by Gem-A CEO, Alan Hart FGA DGA, IJL event manager, Sarah Kitley-Spencer, and Retail Jeweller editor, Ruth Faulkner. The winner will be announced on the opening day of International Jewellery London on Tuesday September 4, 2018.

IJL exhibitors are encouraged to email their hand-drawn design or CAD render to events@gem-a.com before the deadline on August 14, 2018.

The Gem Empathy Award places the gemstone at the heart of the design. It’s not about value or certification; it’s about the beauty of a gemstone and the way that it captures the imagination of the designer maker. We are always extremely impressed by the talent and creativity shown by the IJL exhibitors and we look forward to championing those talents again this year.

For more information, including the exact dimension of the gemstone, please visit jewellerylondon.com/Whats-On/Gem-Empathy-Award or email events@gem-a.com.

International Jewellery London is the UK’S leading trade event for the international jewellery industry. The event showcases the latest product ranges from over 550 high-end, finished
jewellery manufacturers, designers, loose gemstones, and retail services suppliers. IJL attracts an unparalleled range of jewellery focussed and pre-qualified buyers from 64
countries in an exclusive trading environment to do business, share knowledge and network in the heart of London, the UK’s style capital.

Inspiring the industry for over 60 years, IJL showcases future industry trends, provides 100% free education and attracts an unrivalled selection of consumer and trade press. IJL is sponsored by the NAJ and supported by the GIA, Gem-A, The Houlden Group, The Company of Master Jewellers, The Responsible Jewellery Council, Euromonitor and CIBJO.

Rate this item
(0 votes)
More in this category: « An Endowed Chair in Gemology: First of its Kind in the World World-Renowned Jewellery Artist, Wallace Chan, to Speak at Gem-A Conference 2018 »
Tweet