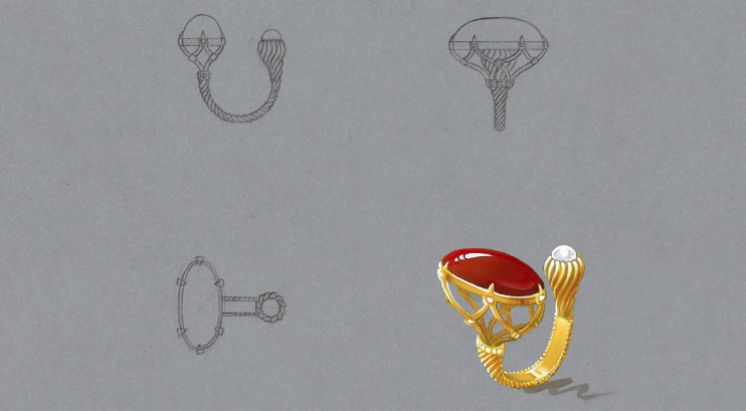 The Gem-A Gem Empathy Award, in association with IJL, is presented for the best use of a precious coral cabochon. 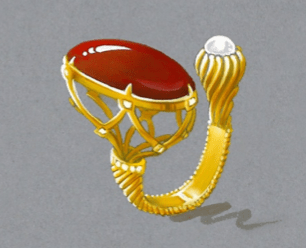 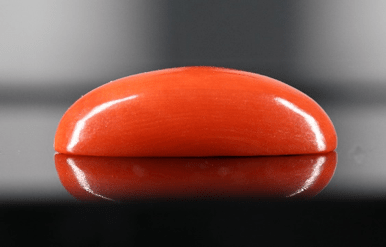 The winning design, Trawling by Bingjie Zhao, and the 12.9ct coral cabochon

[London, 1 September 2019]: IJL and Gem-A are delighted to announce that IJL visitor and BCU School of Jewellery student designer Bingjie Zhao has won the annual Gem Empathy Award for her Trawling ring design.

The long-standing Gem Empathy Award – organised by Gem-A (the Gemmological Association of Great Britain) and hosted by IJL – gives exhibitors and, for the first time in 2019, visitors to International Jewellery London (IJL) the chance to win a specially-selected gemstone.

This year, the Gem Empathy Award was given to the best bespoke jewellery design created for a 12.9 carat precious coral cabochon. Through the competition, Gem-A has sought to highlight the many misconceptions about the use of coral in contemporary jewellery design and explain the many sustainability procedures and laws in place for precious coral.

Alan Hart FGA, CEO, Gem-A: "This competition is all about encouraging IJL attendees to take new and creative approaches to using gemstones. We were incredibly impressed by the standard of this year's entries from across the complete spectrum of IJL visitors and exhibitors, including individuals with and without jewellery design experience. I would like to personally congratulate all the individuals who were shortlisted and our winner, Bingjie Zhao, who will now be able to bring her 'Trawling' ring to life using this year's Gem Empathy gemstone - a 12.9ct precious coral cabochon."

Through her ‘Trawling’ design, Zhao acknowledges the challenges that face common coral, especially pollution, climate change, trawling and overfishing, which lead to vast levels of coral bleaching, stock depletion and damage to sea life. Due to this, it is even more vital to advocate for the sustainable sourcing of precious corals, like this cabochon, which live in a different ecosystem to endangered coral reefs.

“I chose the shape of fish nets and the texture of ropes as elements that represent trawling. I want to raise awareness of trawling problems through this piece of jewellery as well as reference the sustainable source of this precious coral.”

Zhao’s winning design was chosen from a shortlist of finalists, including Wan-Yi Lin, Eli Zhang, Cathie Osborne and Ioannis Chatzipanagiotou. Her concept design includes the coral cabochon set in 18ct yellow gold with 20 small stones and a single pearl cabochon.

Zhao was announced at this year’s Gem Empathy Award winner at IJL 2019 on Sunday 1 September on the Gem-A stand. As the winner, she will now receive the coral cabochon and a contribution to bring her piece to life. She will also feature in a future edition of Gem-A’s Gems&Jewellery magazine.

IJL is sponsored by the NAJ and supported by the GIA, Gem-A, The Houlden Group, The Company of Master Jewellers, The Responsible Jewellery Council, Euromonitor and CIBJO.

International Jewellery London (IJL), the UK’s leading trade event for the international jewellery industry, will return to Kensington Olympia from 1-3 September 2019 with an expanded events programme, and will showcase the latest ranges from over 550 high end, finished jewellery manufacturers and designers, and loose gemstones and retail services suppliers. IJL is an unrivalled opportunity for the international jewellery trade to network and find out about the latest industry trends and market developments which will help retailers and suppliers make the right commercial decisions.

For buyers, the show is the once-in-a-year chance to shop for the widest range of gems, jewellery, packaging and services, and to find out about the most topical issues in the industry.

IJL is sponsored by the NAJ and supported by the GIA, Gem-A, The Houlden Group, The Company of Master Jewellers, The Responsible Jewellery Council, Euromonitor and CIBJO.

Reed Exhibitions is the world’s leading events organiser, with over 500 events in 30 countries. In 2015 Reed brought together over seven million event participants from around the world generating billions of dollars in business. Today Reed events are held throughout the Americas, Europe, the Middle East, Asia Pacific and Africa and organised by 40 fully staffed offices. Reed Exhibitions serves 43 industry sectors with trade and consumer events. It is part of the RELX Group plc, a world-leading provider of information solutions for professional customers across industries.

Gem-A, The Gemmological Association of Great Britain, is the world’s longest established provider of gem and jewellery education. The Gemmology Diploma evolved from the first gem course proposed for the UK jewellery trade in 1908, and the prestigious Gemmology and Diamonds Diplomas — taught in seven different languages and 26 countries around the world — are recognised throughout the world.