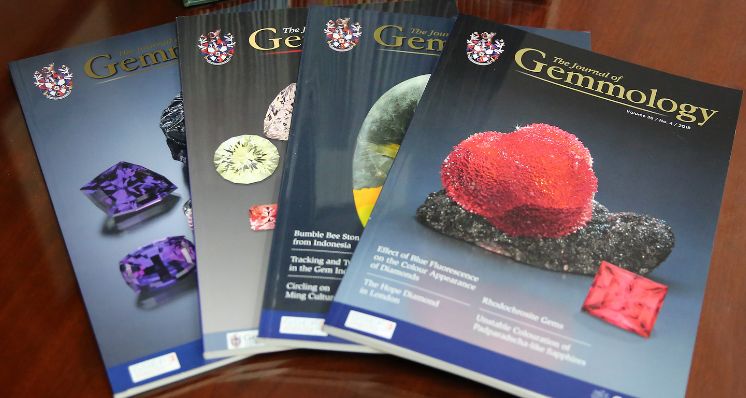 Leading gemmology education provider, Gem-A (the Gemmological Association of Great Britain) is pleased to announce that its flagship publication, The Journal of Gemmology, has been accepted into the SCIE (Science Citation Index Expanded) database.

Inclusion in the SCIE is a signifier of academic excellence for any scientific journal, and this marks a landmark accomplishment for Gem-A’s The Journal of Gemmology, which passed numerous evaluative criteria to achieve this accolade. Journals accepted for coverage in the SCIE are put through a rigorous selection process, which involves meeting 24 ‘quality’ criteria and four ‘impact’ criteria, to ensure that they meet the highest possible standards of academic quality.

The SCIE is currently maintained by Clarivate Analytics (previously by Thomson Reuters and the Institute for Scientific Information/ISI), and is a comprehensive academic database covering more than 9,200 scientific journals. In addition to its coverage in the SCIE, The Journal is also included in Clarivate Analytics' Journal Citation Reports and its Current Contents—Physical Chemical and Earth Sciences. The Journal’s coverage in the SCIE will allow it to obtain an impact factor (a measure of citation activity), which will first be published in the Journal Citation Reports in approximately June 2020.

The inclusion of The Journal in the prestigious SCIE database demonstrates Gem-A’s dedication to sharing high-quality gemmological research with professional gemmologists, scientists, enthusiasts, students and institutions. This reflects the core values of Gem-A, including a commitment to fostering exceptional gemmological education and creating well-informed, passionate gemmologists for generations to come.

Editor-in-Chief of The Journal of Gemmology, Brendan Laurs FGA, commented: “The Journal’s coverage in the SCIE reflects the high quality of the research and information that it contains, and this important step will help elevate gemmology even further within the scientific and academic community. I extend my heartfelt appreciation to The Journal’s Associate Editors, authors and readers for their support in reaching this significant milestone.”

Founded in 1908, Gem-A has been providing world-renowned gemmological education for more than a century. Gem-A’s courses are delivered via 35 Accredited Teaching Centres in 26 different countries. To date, Gem-A also has more than 3,000 Members across the globe, many of whom have passed Gem-A’s prestigious Gemmology Diploma and Diamond Diploma and can use the membership post nominals FGA (Fellow of the Gemmological Association) or DGA (Diamond Member of the Gemmological Association). These are internationally recognised symbols of expert knowledge in gemmology and diamonds, respectively.

First published in 1947, Gem-A’s The Journal of Gemmology is available to Gem-A Members, students and direct subscribers. The Journal is delivered quarterly and publishes original, up-to-date research on all aspects of gemmology, including gem localities, treatments, synthetics and simulants, new technologies and gemmological history, with articles authored by leading gemmologists and researchers worldwide.

Gem-A, The Gemmological Association of Great Britain, is the world’s longest established provider of gem and jewellery education. The globally-recognised Gem-A Gemmology Diploma evolved from the first gem course proposed for the UK jewellery trade in 1908. Today, the Association’s prestigious Gemmology and Diamond Diplomas are taught in seven different languages across 26 countries.

Based in London, England, Gem-A is a charitable organisation committed to promoting the study of gemmology through the provision of education, equipment and membership of an internationally renowned community of gem professionals and enthusiasts. Every November, Gem-A hosts its world-renowned Gem-A Conference, welcoming more than 300 delegates to London to discuss gemmological topics and network with fellow professionals.

Clarivate Analytics’ SCIE (Science Citation Index Expanded) database is one of the key research resources in the Web of Science Group. Since 1964 the SCIE (originally founded as SCI) has been a vital source of information for science researchers worldwide and currently contains a total of 53 million records from 9,200 scientific journals which span 178 disciplines.