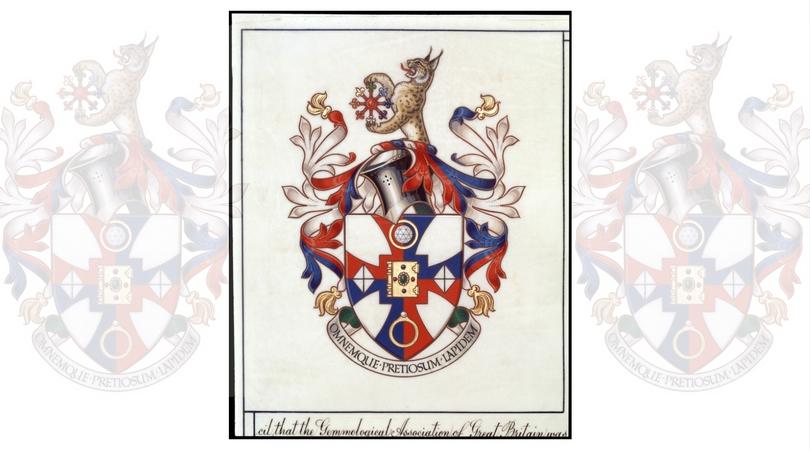 History of the Coat of Arms

In 1966, the Association made an application to the Earl Marshal and Hereditary Marshal of England for a grant of Armorial bearings, based upon a design prepared by H. Ellis Tomlonson, M.A. The application was accepted and given below are details of the interpretation of the heraldic form of the design. The right to a Coat of Arms conferred by a grant of arms, made by the Kings of Arms under the Royal Authority, is a limited right, defined by the limitations in the patent, and not a right which the granter can pass onto a third party without express permission.

The cross is quartered red and blue, like the associational arms of the Worshipful Company of Goldsmiths and the National Association of Goldsmiths. In the middle is a gold jewelled book, which represents the study of gemmology and the examination work of the Association. Above it is a top plan of a rose cut diamond inside a ring, suggesting scrutiny of gems by magnification under the lens. The lozenges represent an uncut octahedra, and the gemmed ring indicates the use of gems in ornamentation. The colours of the shield are mainly the national red, white and blue, which also covers the main range of gems.

The lynx is renowned for his keenness of sight and perception, and in ancient times was credited with the faculty of seeing though opaque substances. He represents the lapidary and the student scrutinising every aspect of gemmology. In his paws is one of the oldest heraldic emblems, an escarbuncle. This is said to represent a very brilliant jewel, usually a ruby. The radiating arms suggest the light it defuses. The seventeenth-century heraldic encyclopaedist, Guillim, writes: “Stones precious are of that sort that we call in Latin ‘Gemmae’; which are the estimation either for that they are rarely to be gotten or for some vertue fancied to be in them, or that they are such as man’s eye is wonderfully delighted withal by reason of their pureness, and transparent substance. Of which kind are the diamond, topaz, escarbuncle, emerald, ruby and such like... But all these several kinds, the escarbuncle is of most use in the Arms... This is called in Latin ‘Carnunculus’, which signifieth a little coal, because it sparkleth like fire casteth forth, as it were, fiery rays.” He continues, in an amusing postscript: “There is another kind if, but fiery carbuncle, which Chyrurgeons can best handle; one of those of the lapidaries is more to be desired than ten of the other.”

The escarbuncle is, as it were, heraldry’s special emblem of gemmology. It is often shown with the fleur-de-lis at the tips, and the pommels round the rays in a different colour, from the rays and the central jewel. Here, the tips and pommels are shown as jewels representing the respective colours of the spectrum, completed by pearl for the white light representing the fusion of the spectrum of colours. This is a unique treatment of the escarbuncle which, with the lynx holding it carefully, represents the aims and activities of the Association.

Omnemque Pretiosum Lapidem
The motto is taken from 1 Chronicles: 29, 2 (I prepared all manner of precious stones).