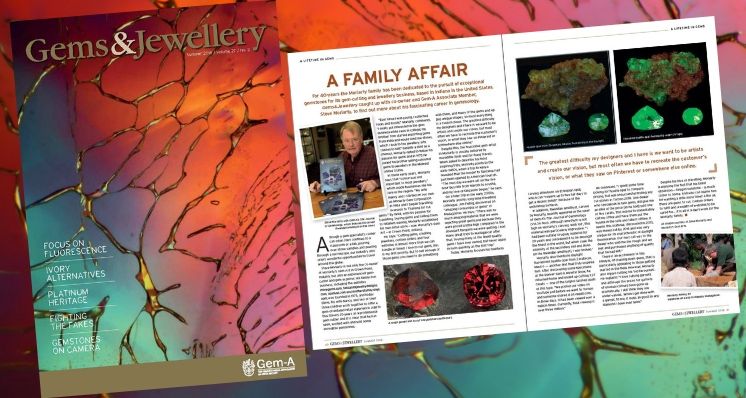 From the Summer 2018 issue of Gems&Jewellery, Gem-A Associate Member and co-owner of Moriarty's Gem Arts, Steve Moriarty, shares his fascinating career in gemmology.

Although a gem specialist’s career can often start confined to a classroom or a lab, pouring over stone samples and peering through a microscope, our industry also offers wonderful opportunities to travel around the globe. 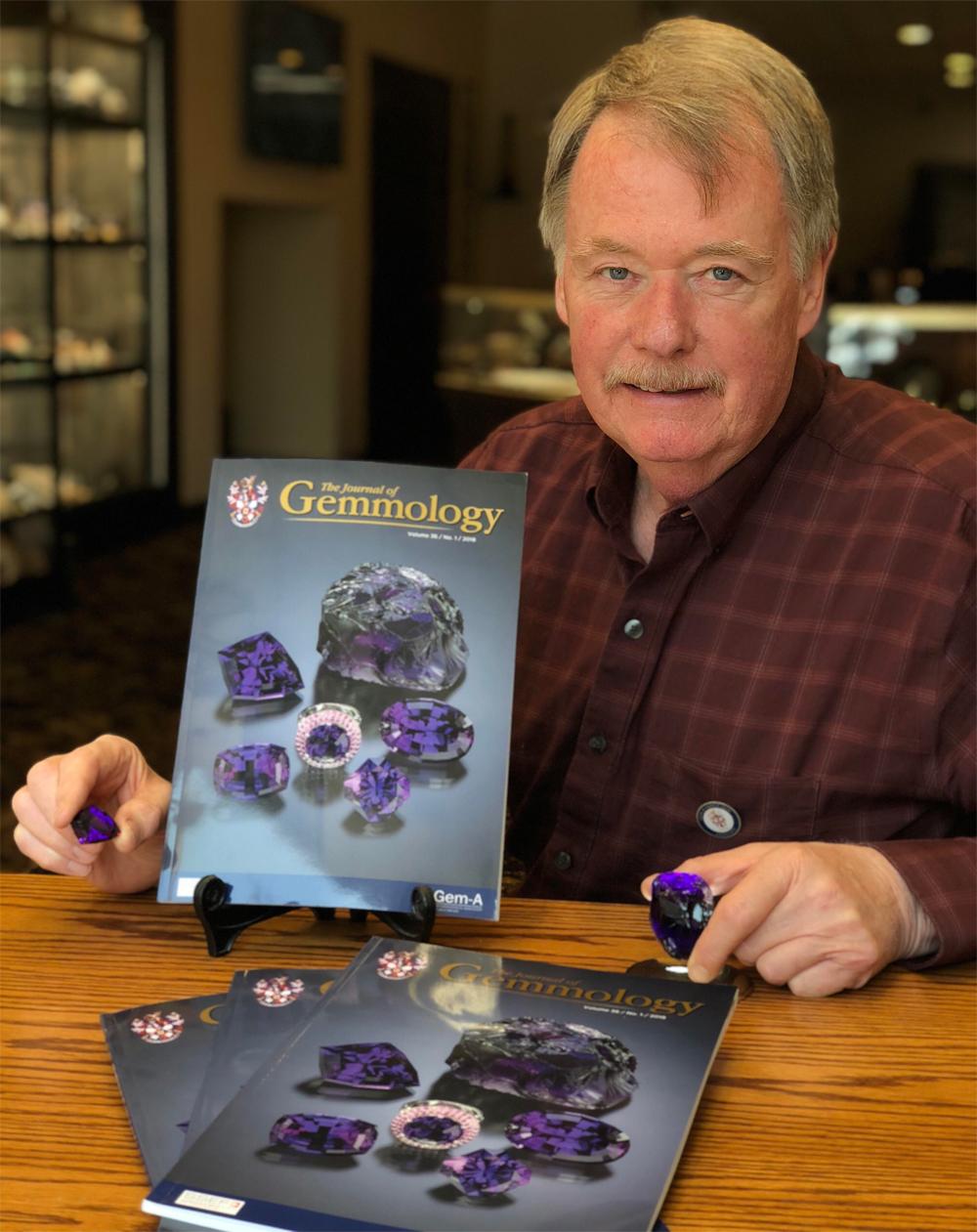 Steve Moriarty is not only the co-owner of Moriarty’s Gem Art in Crown Point, Indiana, but also an experienced gem-cutter and gem explorer. His family-run business, including the websitesmoregems.com, tanzanitejewelrydesigns.com, opallust.com and mothersfamilyrings.com, was founded in 1975, and today Steve, his wife Nancy, and two of their three children work together to offer a gem-orientated retail experience. Add to this Steve’s 25-years as a professional gem-cutter and it is clear that he has seen, worked with and sold some incredible gemstones.

“Ever since I was young, I collected rocks and fossils,” Moriarty comments. “I really got interested in the gem business while I was in college; my brother Tom started importing gems from India and would send me stones, which I took to the jewellery arts classes to sell.”

Despite a stint as a chemist, Moriarty opted to follow his passion for gems and in 1975 he joined his brother selling coloured gems to jewellers in the Midwest United States. In these early years, Moriarty says that “colour was not important to most jewellers,” which made businesses like his rare in the region. “My wife Nancy and I started on our own as Moriarty Gem Corporation in 1984 and I began travelling overseas to Thailand for cut gems.” By 1994, with his passion for travelling, buying gems and selling them to retailers waning, Moriarty established his own retail store – now Moriarty’s Gem Art – in Crown Point, Indiana.

A rough garnet and its cut and polished counterpart. Image Courtesy of Steve Moriarty and Moriarty's Gem Arts.

He says: “Cutting gems, creating jewellery, custom orders and four websites is almost more than we can handle at times! I love to cut gems, this is my first priority. But to sell enough of those gems you need to do something with them, and many of the gems end up [as] unique shapes, so most everything is a custom piece. The greatest difficulty my designers and I have is we want to be artists and create our vision, but most often we have to recreate the customer’s vision, or what they saw on Pinterest or somewhere else online.”

Despite this, the frustrated gem artist in Moriarty is usually restored by incredible finds and far-flung travels. When asked to describe his most inspiring trips, Moriarty points to the early 1980s, when a trip to Kenya revealed that the border to Tanzania had just been opened to American tourists. “The next day we were off on the five hour bus ride from Nairobi to Arusha, and my love of tanzanite began,” he says.

On a later trip in the early 2000s, Moriarty and his long-time travelling colleague, Jim Fiebig, discovered an “amazing cornucopia of gems” in Madagascar. He says: “There was so much amazing material that we were rejecting great gems just because they were priced a little high compared to the abundant bargains we were getting. I had many great trips to Madagascar after that, buying many of the finest quality gems I have ever owned, but never again in such quantity as the first trip.”

Today, Moriarty focuses his freeform carving attentions on Ethiopian opal, which can “require up to two full days to get a decent polish” because of the undulating surfaces.

In addition, Rwandan amethyst, carved by Moriarty, recently appeared on the cover of Gem-A’s The Journal of Gemmology (Vol.36 No.1). Although amethyst is not high on Moriarty’s carving ‘wish list’, this material was particularly impressive. “I had been cutting Uruguay material for 20 years and considered it to be amongst the finest in the world, but when I saw the intensity of the secondary red and blues [in the Rwandan amethyst], I was hooked.”

Moriarty also mentions daylight fluorescent hyalite opal from Zacatecas, Mexico — another find that truly inspired him. After discovering some specimens at the Denver Gem & Mineral Show, he returned home and ended up cutting 7.27 carats — one of the largest faceted opals of this type. “We posted our video on YouTube just before we went to Tucson and someone shared it on reddit.com. In three days, it had been viewed over a million times. Currently, total viewing is over three million.” 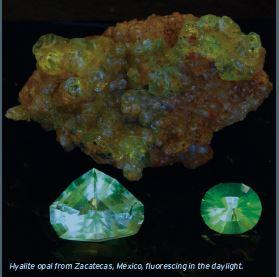 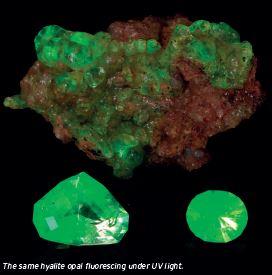 He continues: “I spent some time looking for hyalite opal to compare pricing, but was unsuccessful finding any cut stones in Tucson 2018. One dealer who specialises in rare gems, did give me an idea of the price [as he had] sold one of five carats. This led me to immediately call my office and have them put the hyalite in the safe and take it offline. It seems this material, discovered in 2013, was mined out by 2016 and was very unique for its characteristic of daylight fluorescence. Our next call was to the dealer who sold me the rough and we met and purchased anything of quality that he had left.”

There is an excitement to this lifestyle, of chasing down gems, that is particularly appealing to those getting started in the field. However, Moriarty also enjoys cutting his ‘old favourites’. He explains: “I love cutting garnets and although the prices for garnets of unusual colours have gone up dramatically, I still think they are under-valued. When I get done with a garnet, to me, it looks as good as any diamond I have ever seen.”

Despite his love of travelling, Moriarty is enjoying the fact that his latest obsession – Oregon sunstone – is much closer to home. And who can blame him for wanting a little more time? After all, there are gems to cut, custom orders to fulfil and a wealth of websites to be cared for… it is all in a day’s work for the Moriarty family. ■

Tagged under
More in this category: « Field Trip: The 'Emerald Desert' in Western Australia Investigating Ammolite with Canadian Mining Specialist Korite »
Tweet
Become a Gem-A Member
Apply to become a Gem-A Member
Subscribe to our Newsletter
Keep updated with Gem-A
Sign Up
Get in Touch
Can't find what you're looking for?
Contact Us