One of the rarest gemstonesto be found in the United States - and indeed the world - is red beryl. Here, Elizabeth A. Gass, Gemstone Advancement and Education Coordinator at Jewelry Television (JTV), explores the mining history and natural origins of this special red gem.

Many mineral discoveries in the US were made by those in search of the ‘mother lode’ but instead miners found themselves looking at something totally new and unexpected. Red beryl was no exception.

The Discovery of Red Beryl

Like many other gemstone species in the United States, red beryl was discovered mostly through serendipity. Maynard Bixby was a bookkeeper turned prospector, who travelled to Utah after becoming involved in mining in Colorado and Arizona. He staked several claims in a remote part of the Thomas Range of Utah. The claims focused on the recovery of topaz specimens and rough but at one of his claims, Maynard’s claim, he found the first red beryl crystals in 1904. He sent a sample to National College in Washington D.C., where it was formally identified as a new variety of beryl.

The name bixbite was originally given to the new beryl variety but the name was too similar to another mineral discovered a few years earlier by Bixby: bixbyite. The name was discredited due to the risk of confusion in favour of calling the mineral red beryl. Soon after discovering red beryl, Bixby turned his efforts toward red beryl mining, but production was limited, and the material was not gem quality. 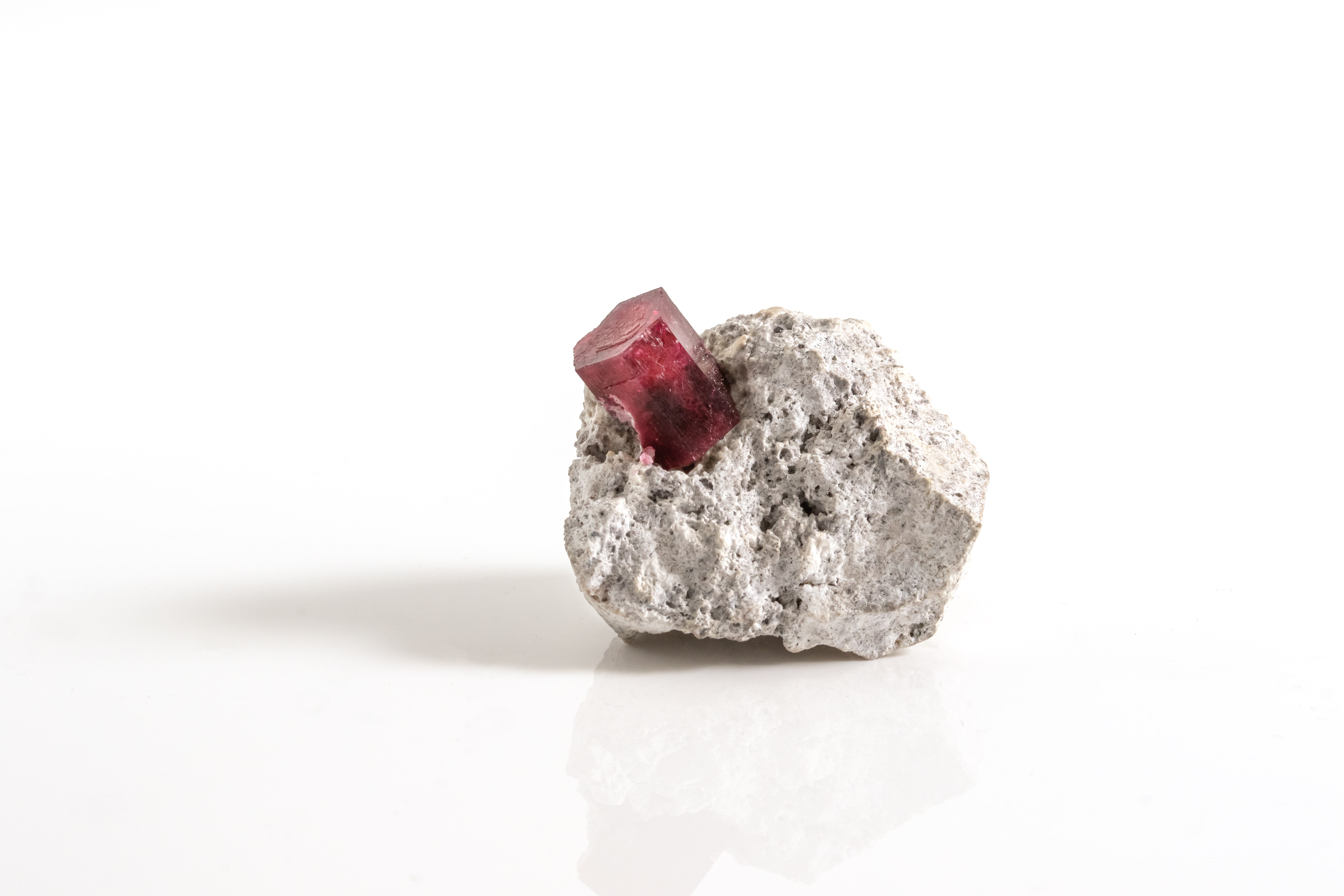 A striking example of a red beryl crystal in matrix.

In 1958, a second occurrence of red beryl was discovered by Lamar Hodges in the Wah Wah Mountains in Utah, some 90 miles south of the original find. He was unsuccessfully prospecting for uranium ore when he unearthed gem quality red beryl crystals. He staked the Violet claim and for 18 years he and his family worked the claim as a hobby. The rights to mine the property were purchased by the Harris family in 1978. They staked 12 claims called Ruby 1-4 and Violet 1-8. These claims became the Ruby Violet Mine.

In 1994 the Kennecott Exploration Company (KEC) signed a three-year lease with an option to buy with the Harris family. The company wanted to see if larger scale mining of red beryl was feasible. KEC took numerous core samples and tunnelled into the deposits, removing as much as 11,000 tons of rock. They were able to estimate the yield of the ore deposits at 1.2ct of red beryl per ton of ore with only 10% yield during faceting. This means that the mine was estimated to produce .125ct of faceted red beryl per ton of ore. Even though their explorations were considered a success, in 1996, the company downsized and decided to let the mine go back to the Harris family.

Red beryl has been produced by only seven locations, the majority of those are in Utah. The only other country to produce red beryl besides the US is Mexico. Other beryl varieties are quite common around the world and most form in granitic pegmatites, metamorphic or metasedimentary rocks. Red beryl is different. All the known occurrences of red beryl have been found in one unlikely host rock: rhyolite. Most geological studies on red beryl have been conducted at the Ruby Violet Mine in the Wah Wah Mountains of Utah. This is because it is the only occurrence of red beryl that has produced facet grade material in any kind of quantity. 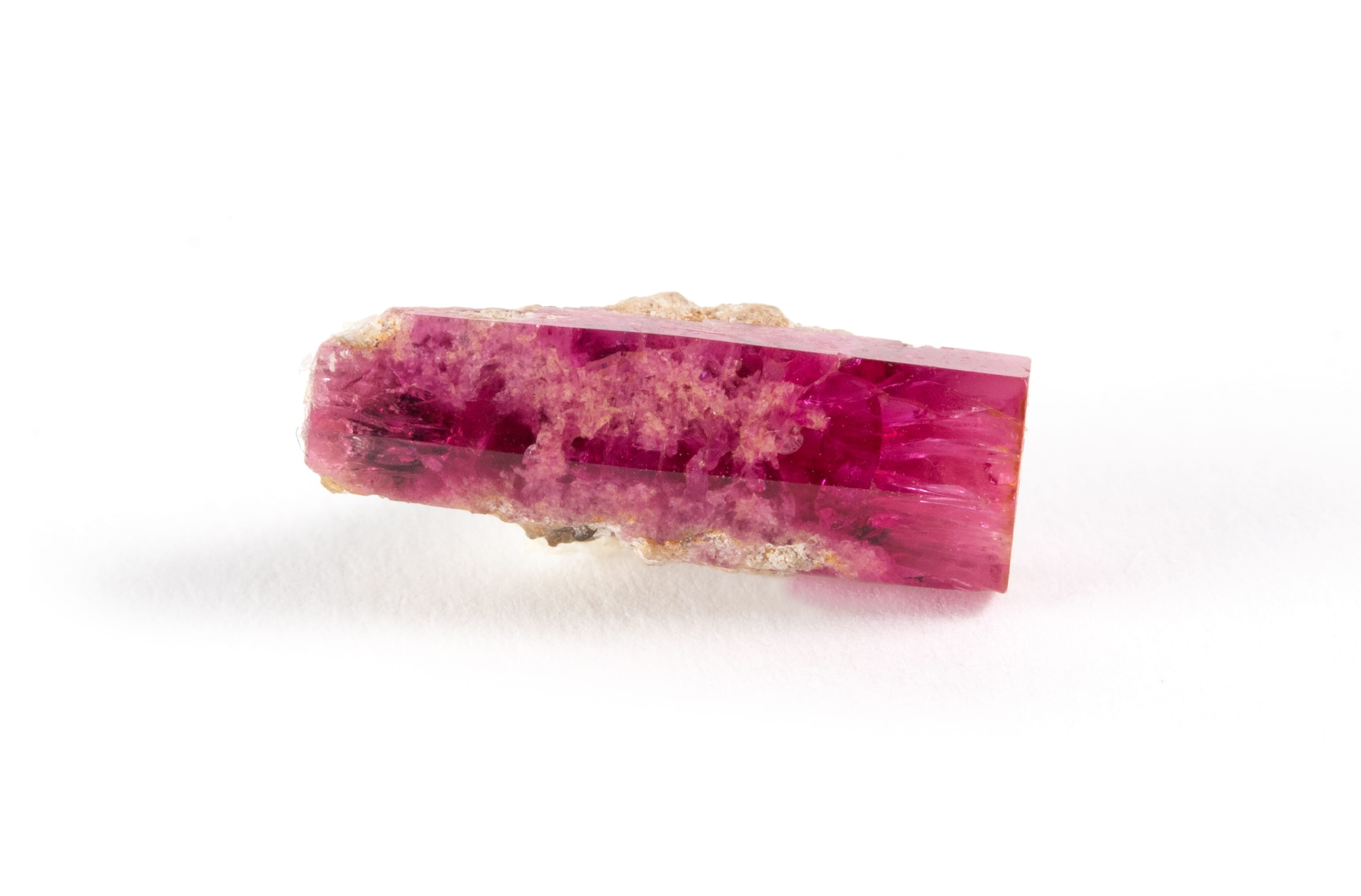 The geology of the Wah Wah Mountains consists mainly of volcanic rock, but the original country rock is mainly composed of sedimentary rocks from the Paleozoic and Mesozoic overlying Proterozoic basement rocks. These rocks were extensively folded and faulted during the Sevier Orogeny that took place 140-50 million years ago. Volcanic activity began 34 million years ago but the deposits that hold red beryl formed 23 million years ago. During this time, regional tectonic activity caused large scale faulting and smaller scale volcanism in the form of small domes, igneous intrusions and lava flows. The red beryl formed in the rhyolitic lava flows.

The Formation of Red Beryl

Red beryl, unlike other minerals that form in topaz rhyolites, like topaz and garnet, did not form in gas cavities. Its genesis was due to the beryllium (Be) content of the rhyolite and its relatively low calcium content. As the rhyolite cooled, hot fluorine-rich gases were released, mixed with water vapour from sediments beneath the rhyolite and created a supercritical fluid. 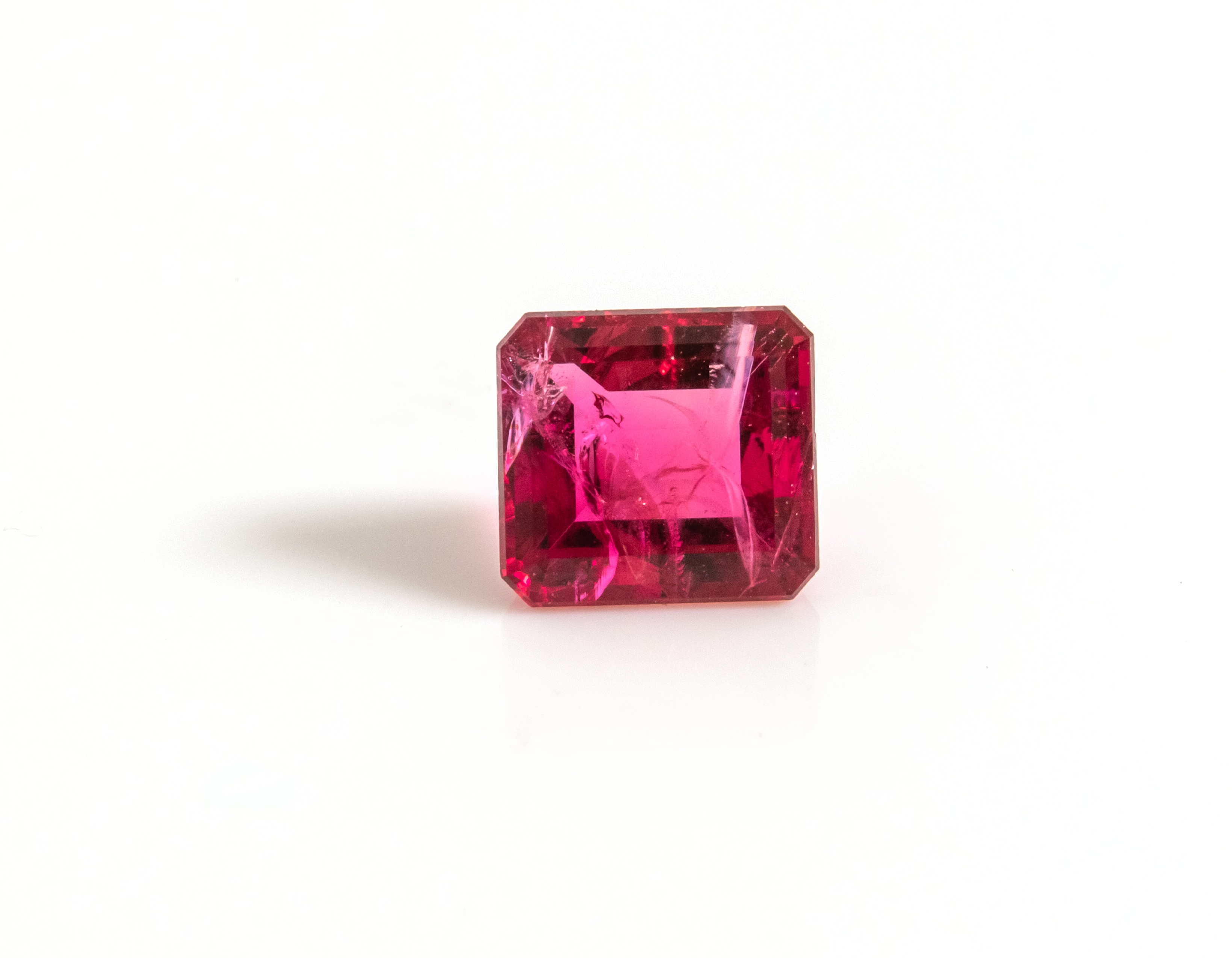 Red beryl has a very specific formation environment that lends itself to unique chemical and physical properties, but this is not entirely true. It very much falls in line with other beryl varieties. What does make it unique are its chemistry and colour. Compared to other beryl species it is high in iron and manganese oxides, low in alkali elements and is almost devoid of water. Its colour is caused by Mn3+, just like morganite. Where the two differ is where the Mn3+ came from. It is believed that the Mn3+ in red beryl was sequestered during formation whereas the Mn3+ in morganite is an oxidation product from exposure to natural radiation after formation.

Red beryl is a beautiful and unique gemstone produced in the United States. The low yield and small distribution area make it particularly difficult to mine. Thankfully man has a thirst for adventure and is no stranger to hard work and dedication. Without it we would not have this American treasure.