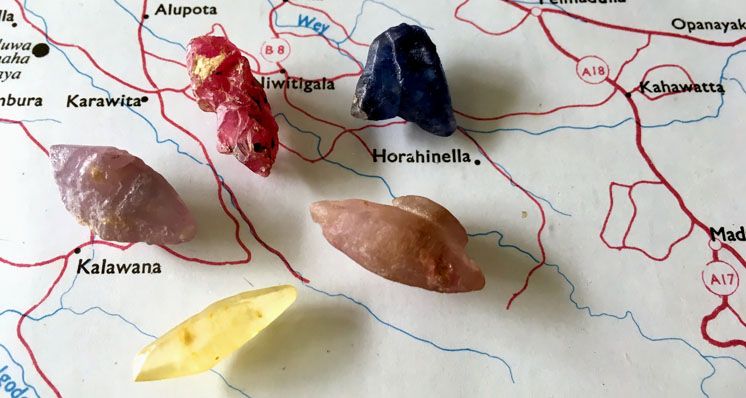 Helen Molesworth FGA, managing director of the Gübelin Academy and a professor of the history of jewellery, takes the reader back in time to Seilam, now Sri Lanka.

'From here...we reach the island of Seilam, which is, for its size, one of the finest islands in the world...This island produces many precious gems, amongst which are rubies, sapphires, topazes and amethysts. The King of the island owns a ruby thought to be the most beautiful in the world, as long as the palm of your hand and as thick as three fingers; it shines like the most burning fire and is perfect.' - Livres des Merveilles du Monde or Book of Marvels of the World, Marco Polo, ca 1300

At the age of 17, a young merchant from a Venetian family set off with his father and uncle on an unusual expedition: to travel and explore the Far East. Twenty-four years later, in 1295, they returned to Venice, wealthy men, with a valuable hoard of both stones and stories. Immediately caught up in the Italian war to which they had returned, Marco Polo was imprisoned, and before his release, dictated his travels to a fellow inmate of posterity. What is passed down to us is a wonderful medieval European account of parts of Asia and the Middle East, from a unique historical perspective. Although relatively brief, the account of Sri Lanka, here Seilam, is extremely appropriate. It is an excellent early reference not only to the first known source of ruby (and maybe also and/or spinel, which was often confused in early sources) and sapphire at the time, but also to the beauty of the island. 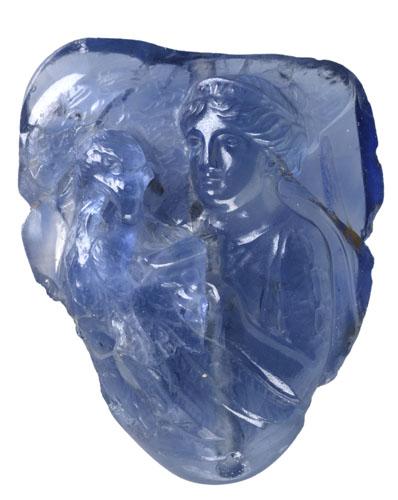 Known by the Greeks and Romans as Tabropane, in Persian as Serendib, and to be recognised more recently under British rule as Ceylon, Sri Lanka was often referred to by writers as a utopian land of natural riches and great beauty. The earliest gem reference to the island was as the origin for the valuable gems given by Middle Eastern King Solomon to the Queen of Sheba in the Old Testament. Centuries later, not far away in ancient Iraq, a wonderful oral tradition of fabulous story-telling developed in the Thousand and One Nights, in which we find the fantastic tales of continuous castaway Sinbad the Sailor, whose sixth voyage saw him shipwrecked on the very same island, where rivers flowed with rubies, diamond, pearls and 'many precious things'. From a western perspective, Sri Lanka's natural resources were already being traded into Europe through India by the time of Alexander the Great in the third century BC, thanks to the development of the Silk Route. By the time of Marco Polo's Livres des Merveilles du Monde, this fine island paradise was already clearly recognisable as an 'Island of Gems': the Ratna Dweepa of ancient Sanskirt. 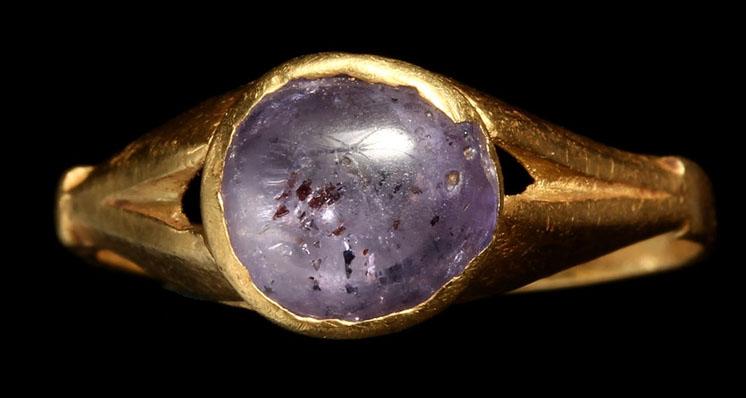 All the more amazing are such early geographically-relevant accounts of sapphire when we realise that many seemingly ancient references to corundum are mistranslations or transliteration errors. Traditionally, European scholars have substituted our word (and European variations of) 'sapphire' for the ancient Latinised Greek or Persian versions of sapphirus, discarding modern day mineralogy in their translation efforts. In the majority of early references, such sapphirus would have been the blue lapis lazuli from the ancient mines of Afghanistan, and at worst case, any blue stone in general. The poor ruby suffers even worse the woes of inaccurate reporting. Often credited by non-historians today with being one of the Old Testament gemstones mounted in the High Priest's breastplate in the book of Exodus together with other marvellous ancient ruby references, in fact we have little to no archaeological evidence supporting the use of ruby as a gem so far back. Other red gems such as garnet, spinel, maybe; ruby, sadly not.

This highlights the importance of archaeological evidence supporting ancient references, and happily in the case of sapphire, a handful of important sapphires survive from antiquity. Several known Roman jewels exist, perhaps set in a ring with a single 'cabochon' polished pebble, such as the third century example from the Babar-Content Collection; and a few more tend to appear with other multi-coloured gems in later Byzantine jewels. Arguably one of the earliest and most beautiful is the Roman sapphire drilled as a bead and carved in cameo depicting Aphrodite feeding an eagle, a subject of imperial allegory from the first century and now in the Fitzwilliam Museum in Cambridge: an extraordinary important object, which would have been in the most prestigious of ancient collections. 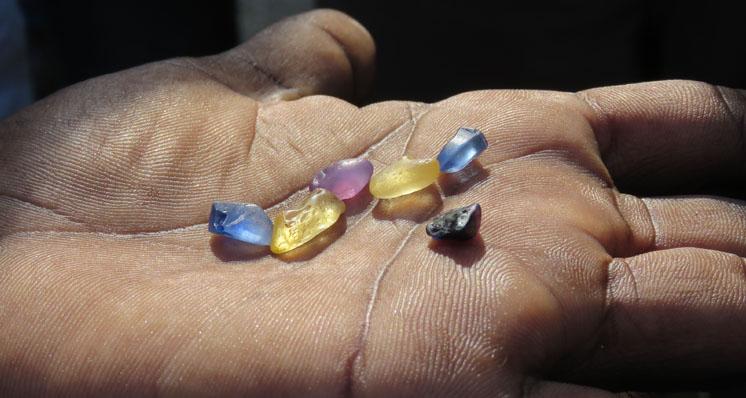 The spoils of river mining in Sri Lanka: a collection of water worn sapphire pebbles.

By the Middle Ages onwards, naturally more sapphires survive, and unsurprisingly the best are found in royal collections. Two spectacular sapphires sit in the Imperial Crown of Great Britain: the seventeenth century Stuart Sapphire and the eleventh century St Edward's Sapphire, the oldest gem in the Royal Collection. Under Queen Victoria, both astonishing stones took pride of place at the front and atop the Imperial Crown. The huge hundred carat Stuart Sapphire sat central to the circlet, until it was bumped to the back by the Cullinan II in 1909, while the smaller St Edward's sapphire, eponymously and originally belonging to Edward the Confessor, remains in its venerated position, befitting its earliest owner, in the surmounting Maltese Cross. 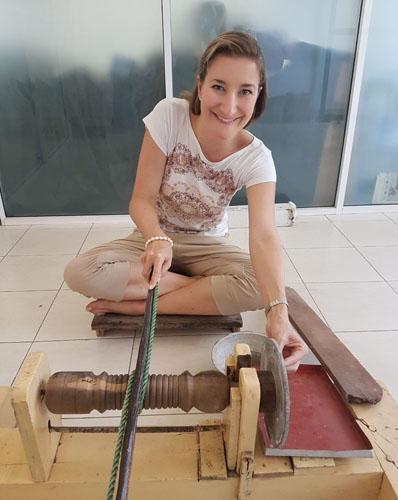 Helen Molesworth trying out traditional faceting and polishing techniques with a bow drill in Sri Lanka. Image by Armil Sammoon.

Perhaps the most remarkable early medieval sapphires, however, were those mounted in the early ninth century Carolingian amulet known as the Talisman of Charlemagne. Said to have been sent to the Holy Roman Emperor by the Middle Eastern Abbasid Caliph Harould Al-Rashid, two sizeable sapphires once sandwiched a hair of the virgin as combined powerful symbols of purity, loyalty, royalty and righteousness. Exemplary too, of our Silk Route road for sapphire travels. These, and all those preceding, were almost undoubtedly examples of Sri Lankan sapphires, as Sri Lanka was, crucially, our only known source of sapphire in the ancient world.

I was fortunate enough to visit this incredible country recently, and to experience production and trade first hand on this 'Island of Gems'. Sapphires are still central, psychologically and financially, with a host of other gems, including garnet, moonstone, quartzes and spinel featuring frequently in local mining and manufacturing. I experienced main mining techniques directly, plus post production, in the regions surrounding Ratnapura, our traditional 'City of Gems', and from a historical perspective, it was remarkable to see hundreds, if not thousands, of years' practices continuing today as if through unbroken tradition. 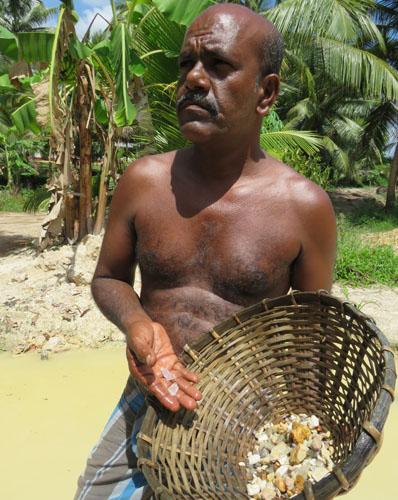 River panning for alluvial deposits continues almost unchanged, a millennial old mining practice which sorts surface-reachable deposits with relative ease. I descended shaft mines, also after secondary placers and another age old mining technique, which would have developed naturally after easier alluvial river beds would have been worked out. Watching the traditional blow-pipe heat-treatment of ruby buried amongst coke and coconut shell in a back yard reminded me of two medieval Arabic accounts - of Middle Eastern polymaths Al-Biruni and Teifashi - of burying Sri Lankan rubies within or under bonfires to improve their colour. Even some of the local cutting and polishing practices, with original hand-held bow drills, followed almost the exact same mechanism as a gem-carving drill depicted on one Mediterranean Roman gem-engraver's tomb from the first century AD. 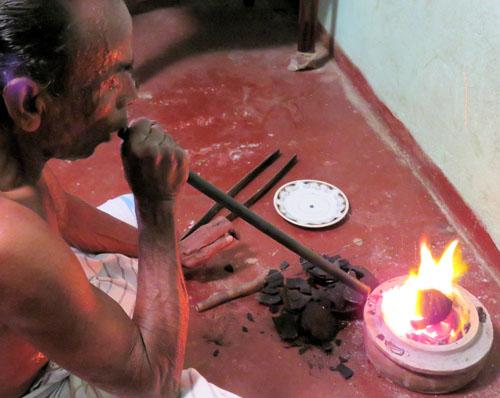 Yet Sri Lanka has balanced tradition with continual development. While quality of production and some traditional techniques have remained consistent for thousands of years, cutting-edge technologies have been developed and international trade drawn in from all over the world. At the same time as remaining a player on the world stage of gem production, Sri Lanka has successfully held off the loom of large scale mining giants ready to reap the riches of this tiny island below the surface, a forward-thinking decision in favour of local sustainable practices to give the country and its people a long term future.

This compact but competent land, long considered a natural utopia to travellers and traders, and once more coming into its own in terms of tourism, has consistently remained a true Island of Gems, a centre for sapphires, and indeed one of the 'finest islands in the world'.

Tagged under
More in this category: « Sapphires of Ethiopia: The Forbidden Road to Chila The Lifecycle Of A Sapphire Rush »
Tweet
Become a Gem-A Member
Apply to become a Gem-A Member
Subscribe to our Newsletter
Keep updated with Gem-A
Sign Up
Get in Touch
Can't find what you're looking for?
Contact Us