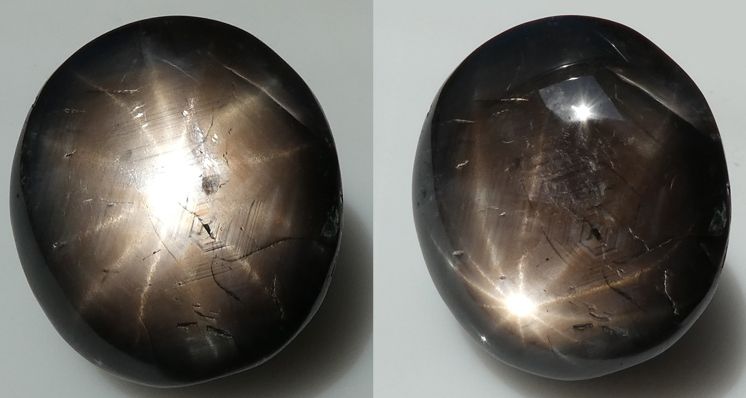 This article by Guy Lalous ACAM EG summarises a technical article from The Journal of Gemmology discussing a giant 12-rayed black star sapphire from Sri Lanka with asterism caused by ilmenite inclusions.

How can we classify solid inclusions?

Solid inclusions are divided into three categories, by time of entrapment: those formed before the host crystal, called protogenetic; solids which arise from the solution from which both they and the host originated, called syngenetic and those formed after the host crystal has finished its growth, epigenetic.

Exsolution in mineralogy is a process where an initially homogeneous solid solution separates into at least two different crystalline minerals without the addition or removal of any material. In most cases, it occurs upon cooling below the temperature of mutual solubility.

Read more: Sri Lanka - A Gem of an Island

How does the exsolution process of rutile occur in star corundum?

At temperatures of 1200-1400°C, titanium moves through the resulting expanded crystal lattice and between the oxygen atoms, exsolving into rutile needles. Other frequently encountered oriented oxide inclusions are hematite (Fe2O3) and ilmenite (FeTiO3).

Asterism is the star effect seen by reflection and scattering of light in cabochon-cut stones with suitably oriented rod-like inclusions or platelets. In corundum, due to the three-fold rotational symmetry of the basal pinacoid, networks of exsoluted syngenetic inclusions are oriented in three different crystallographic directions that intersect at 120°. The star image results from the incoherent superposition of reflected Frauhofer diffraction patterns, which arise when light is scattered around the network of inclusions. The cabochon in facts as a biconvex lens, which focuses the star image above the gem.

What causes the asterism in 12-rayed black-star sapphires from Thailand?

Black star sapphires from Thailand contain inclusion networks of both the hematite-ilmenite series and rutile. The Fe-Ti epigenetic inclusions crystallise due to the presence of impurities of Fe and Ti in the host crystal as it cools after its formation, forming microscopic needles and platelets. The additional network of rutile needles parallel to the second hexagonal prism of the corundum host produces the second six-rayed star at 30° with respect to the first one. The observer will see a white six-rayed star perpendicularly superimposed over a yellow/golden six-rayed star.

This study is about a large 112.64 ct ‘Ceylon Stars’ black sapphire of probable Sri Lankan origin that exhibits 12-rayed asterism. Raman spectroscopy combined with optical microscopy has been used to analyse both networks of needle inclusions in this sapphire as well as in smaller samples from the same source and in a black star sapphire from Thailand for comparison.

Raman spectroscopy surprisingly identified both networks of acicular inclusions in the giant 12-rayed black star sapphire as ilmenite. Typical Raman spectra for the ilmenite inclusions were characterized by a strong band at 678 cm−1. The other vibration modes for ilmenite were 162, 194, 221, 256, 291, 329, 374, 451 and 597 cm−1. The obtained spectra are in good agreement with natural ilmenite. The acicular inclusions parallel to the first-order hexagonal prism in each of the smaller 12-rayed star sapphires from Sri Lanka were identified as ilmenite by Raman spectroscopy. Ilmenite also constituted the second set except for one sample in which the second network consisted exclusively of rutile needles. Raman spectroscopy confirmed the presence of an Fe/Ti-rich oxide as well as rutile in the 12-rayed black star sapphire from Thailand.

Optical microscopy of the 12-rayed black star sapphire at high magnification near the surface of the cabochon revealed some details about the microstructure of the growth bands. Networks of oriented needles and platelets - in three different orientations intersecting at 60°/120° were present within the basal plane. Compared to the growth bands, most of the acicular inclusions were oriented perpendicular and oblique at 30, or parallel and oblique at 60°. The density and the width of inclusions varied in different areas of the stone. Also, the average width of the inclusions oriented perpendicular to the growth bands of the host corundum was narrower than the inclusions oriented parallel to the growth bands. This explains the difference in sharpness between the two six-rayed stars. The needles responsible for the two stars were similar in colour, resulting into 12 brownish rays. Some larger plate-like shaped black inclusions reminiscent of magnetite with edges parallel or perpendicular to the acicular inclusions were observed. Strong transmitted illumination revealed a mainly dark blue body colour with some areas showing a more violet hue.

The presence of a single mineral - ilmenite - as the cause of 12-rayed asterism in sapphire was documented here for the first time in the largest such gem known to the authors, a 112.64 ct black star sapphire of probable Sri Lankan origin. The sharpness of the rays correlates to the width of the inclusions, regardless of the identity of the mineral that causes them. The fact that it contains only ilmenite inclusions is consistent with its Sri Lankan origin, which is distinctive from the inclusion assemblage found in Thai stones. ■

This is a summary of an article that originally appeared in The Journal of Gemmology titled 'Large 12-Rayed Black Star Sapphire from Sri Lanka with Asterism Caused by Ilmenite Inclusions’ by Thanh Nhan Bui, Pascal Entremont and Jean-Pierre Gauthier 2017/Volume 35/ No. 5 pp. 430-435

Cover image the 112.64 ct 'Ceylon Stars' sapphire, from the collection of P. Entremont, displays 12-rayed asterism, as shown here with pinpoint illumination positioned (a) over its centre and (b) obliquely. Images courtesy of P. Entremont.

Tagged under
More in this category: « Coloured Gemstones from Brazil: Past, Present and Future Journal Digest: Bumble Bee Stone from Indonesia »
Tweet
Become a Gem-A Member
Apply to become a Gem-A Member
Subscribe to our Newsletter
Keep updated with Gem-A
Sign Up
Get in Touch
Can't find what you're looking for?
Contact Us