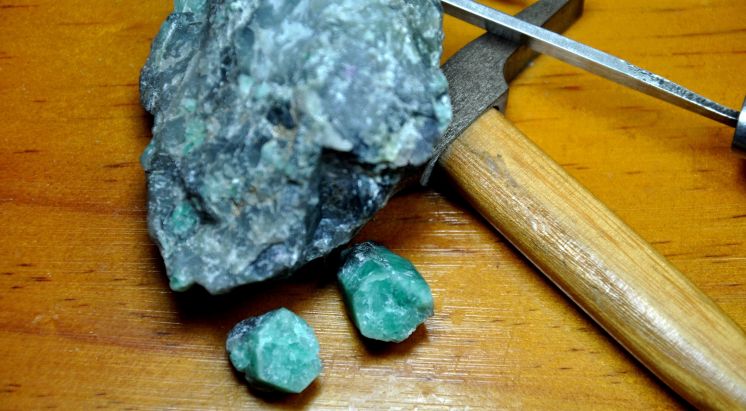 We decided to take a trip to the 'Emerald Desert' in Western Australia, to look for emeralds. After arriving at Kalbarri National Park and spending a week, surrounded by its stunning pristine beauty, it was not a very short leap from there to our emerald destination - about 600 km – and setting off at 5am we reached Mount Magnet, renowned for iron and gold mining, before day-break.

To reach the Poona emerald mine we drove another 200 km from Mount Magnet to Yalgoo. Alluvial gold was discovered in Yalgoo in the early 1890s but then in the first part of the twentieth century, emeralds were discovered.

A variety of the mineral beryl (Be3Al2(SiO3)6)  - green in colour due to the traces of chromium or vanadium - were found in the Warda Warra in the Yalgoo Goldfields. But it is the Poona deposit, which has always been considered the most productive in the region. Several other, much less significant deposits like Noongal, Menzies and Warda Warra in the Yalgoo Goldfields (names from the Aboriginal language) discovered small unnamed occurrences of mostly milky-opaque emeralds, richly filled with cracks and inclusions and thus appeal mainly to mineral collectors, scattered across the Emerald Desert in a radius of more than 200 km around Poona.

The owners of our hotel told us they have relatives in almost every mining town of the Goldfields' surroundings, and locals filling the bar, mainly miners, gave us plenty of advice on how to reach the Poona emerald mine and how to prepare for this expedition. The owner gave us a present - a huge crowbar. "It will help," he said, and it really did!

In the morning it seemed that the entire town knew "these people from London are going to dig for emeralds in the desert". They waved at us as we filled our 4x4 with endless bottles of mineral water, and even when we drove through the town.

Equipped with hand-drawn maps, it was just 150 km to Cue - a cosy town of 300 people - surrounded by golden mines, big and small, and then another 70 km on an uneven track to the mysteries of Poona's Aga Khan Emerald mine, named after a member of the Iranian royal family Sultan Aga Khan III.

The gold mines with the highest productivity lie right on the doorstep of Cue and as soon as we passed this tiny, tidy town, we found ourselves in a land beautified with all shades of gold. It was impossible not to take photos of Cue's numerous gold mines from the distance and close up, especially after we were shown a huge gold nugget by a Cue resident, who had found it in the area several years ago and who ever since has worn a nugget around his neck as an amulet.

We were told by locals that the best sign for those off fossicking, is to meet the potentate of the desert and master of all its treasures - the Golden Coins King - the beautiful and rare lizard 'dragon' of the Emerald Desert, who it is said leads to great fortune.

After a couple of miles along a narrow bumpy path, we finally discovered an abandoned runway and a bit further on, a now irrelevant warning: 'Danger Active Mining Area Keep Out'. One more mile and we were honoured by the chance to see and enjoy Pegmatite's field.

In Poona emeralds occur in both mica schist and quartz pegmatite matrix. The best emeralds were found here during the active mining period of 1960 to late 70s, in a mica schist adjacent to the quartzose beryl-bearing pegmatite, where some crystals were gem quality, and huge boulders of perfect quality snow-white quartz were found scattered across the area.

Our mineral collectors' enthusiasm gradually shrunk as the day wore on and the hope of finding a huge sparkling transparent emerald of a saturated green began to shrink.

But sometimes a small surprise find can bring greater gratification than an expected large one, and it happened this time; we found a milky-green crystal, almost invisible amongst the mass of brightly coloured rocks sparking in the sun, but in our eyes it was invaluable.

Sunny and golden Western Australia slowly abated into the bustling heart of London, where our designer studio is based in Hatton Garden and the arrival of the Poona emerald was eagerly awaited.

From the very beginning there was no doubt what kind of design this opaque emerald demanded, but primarily it was necessary to release it from the matrix. When dealing with one of the most fragile gems, this it is not an easy task.

Although some of Poona's crystals are gem quality, they are still quite undistinguished in size, with only one exception in 1971: an 138 carat transparent emerald was found and widely published in the WA press. Gemmologists Perry and Levinson were engaged to separate the emerald from the biotite matrix.

Despite their best efforts the stone cracked and split into two unequal parts of 118 and 20 carats. This type of matrix makes the extraction of emeralds very difficult, which made mining in Poona an unattractive commercial quality.

We remembered this story, when our emerald broke in two parts during our attempt to release the green jewel from the tenacious rock, but in this case it did not spoil our plan. The ‘Gems Merchant Captain’ ring shoulders half of the emerald and represents Poona’s rough supplied to Sultan Aga Khan III, telling the story of the wondrous emerald desert of Australia. ■

Tagged under
More in this category: « Inside the World of Master Photomicrographer Danny Sanchez Interview: Steve Moriarty of Moriarty's Gem Arts on a Lifetime in Gemstones »
Tweet
Become a Gem-A Member
Apply to become a Gem-A Member
Subscribe to our Newsletter
Keep updated with Gem-A
Sign Up
Get in Touch
Can't find what you're looking for?
Contact Us