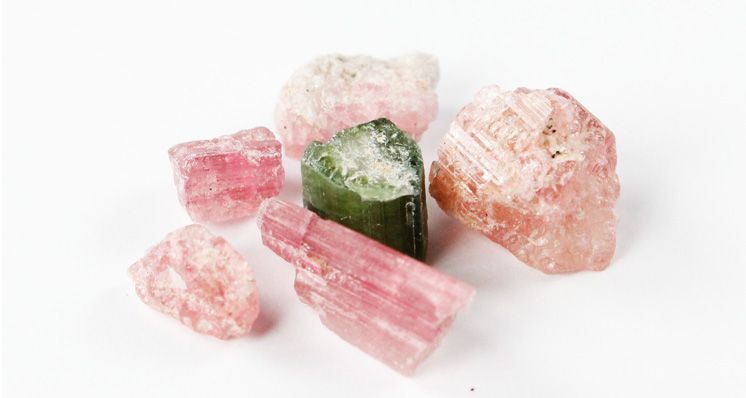 Claire Mitchell FGA DGA takes a hands-on look at the Oceanview Mine, in the Pala mining district in California, USA.

Oceanview Mine is situated 2.5 miles northeast of Pala, on the northeastern slope of Chief Mountain, a short, scenic drive from Pala, California. Visitors to the area pass through landscapes bedecked with nurseries growing a multitude of produce and plants; turning off the main highway you pass through beautiful orange groves, finally reaching the dirt track which takes you up to the mine.

Famous mines in this area also include the Tourmaline Queen, famous for its 'blue cap pocket' tourmaline, and Pala Chief Mine, famous for its kunzite. The area has been a source of gem materials since the 1870s; with its most active period being between 1900 and 1922.

Claim was first made to the Oceanview deposit in 1907 by Frank A. Salmons. Since then, ownership has passed through several hands during its lifetime, and the mine is now owned by Jeff Swanger, who acts as CEO, owner and operator of Oceanview Gem Mine LLC. In its lifetime the mine has produced some of the best morganite specimens ever recovered in North America, as well as exceptional tourmaline and kunzite, with additional minerals of lepidolite, mica, apatite, quartz and feldspars.

Today the Oceanview Mine is the only actively working underground mine in this district. The mine is also open to the public for a fee-for-dig, dump screening - which I gleefully attended in April 2016.

Two things first struck me when I first arrived: firstly, the amazing view from the top of the site, and secondly the beautiful, perfumed smell of wildflowers in the air.

The set up for the mining experience was simple: there was a large dump pile of material which had been taken out of the mine by excavator, around which the screening equipment was situated.

When I first arrived I was allocated a position and screening equipment, and after a safety briefing I was instructed on the most efficient and proficient technique for screening the material. We were given four hours to work the pile; so using a bucket and small shovel I collected a full bucket and returned to my workstation. Two large wooden heavy wire screens allow you to 'sift' the material - the first screen (with the larger mesh) sits atop the second screen with a smaller mesh.

Material collected from the pile is placed in the top mesh, the smaller material of which then passes through to the second mesh. Any larger pieces in the top mesh are then washed and checked for gem-quality material and discarded or kept as required.

The material in the second screen is then washed and checked for gem-quality material. It is thrilling seeing glimmers of colour or good crystal form.

After four hours of happy and productive sifting, it was time to assess the fruits of the day's labours. These included tourmaline (pink, green and black, or 'schorl'), mica, quartz, garnet and beryl. Sadly I had to leave behind some of the larger pieces such as the tourmalines in matrix due to weight restrictions on my baggage, which, whilst not 'gemmy', were still very interesting pieces.

Visitors can also experience a jeep tour of Chief Mountain, which not only offers some breath-taking views but also allows you to catch a glimpse of the active mine entrance and prospects, as well as views of other famous mines in the area. At the edge of the ridge you can see the Tourmaline Queen Mountain, and in the distance you can just about see other former mine workings.

There is truly nothing better than digging for gem materials - it's a great visit, for both the experience and for the introduction into the techniques in sorting by this method. I thoroughly recommend this to anyone visiting the area - a bonus is the fantastic weather and beautiful countryside whilst there. ■

Tagged under
More in this category: « Field Trip: Gold and Gemstones on the Greek Island of Naxos Gem Central Sri Lanka - A Gem of an Island »
Tweet
Become a Gem-A Member
Apply to become a Gem-A Member
Subscribe to our Newsletter
Keep updated with Gem-A
Sign Up
Get in Touch
Can't find what you're looking for?
Contact Us