Gems&Jewellery contributor and avid gemstone explorer, Helen Serras-Herman FGA, takes us on a tour of the beautiful Greek island of Naxos and shares insights into the marble, emery, flint and gold that shapes its history.

The Greek island of Naxos is part of the Cyclades, an island group in the Aegean Sea, located southeast of Athens and the mainland of Greece. They are connected via air with Athens, and via ferry with the port of Piraeus and the port of Rafina outside of Athens.

The most famous and cosmopolitan Cycladic islands are Myconos and Santorini. Naxos is the largest island of the Cyclades, rich in farming (olives and potatoes) and stockraising (producing cheese).

Naxos flourished during the Late Neolithic and Early Bronze Age between 2700 and 2300 BC.

Three natural stones – marble, emery and flint – all found on the island of Naxos, were most vital in shaping this ancient culture. Marble was the main material for sculpture, and emery was used to sand and polish it, as well as for engraving hard gems. 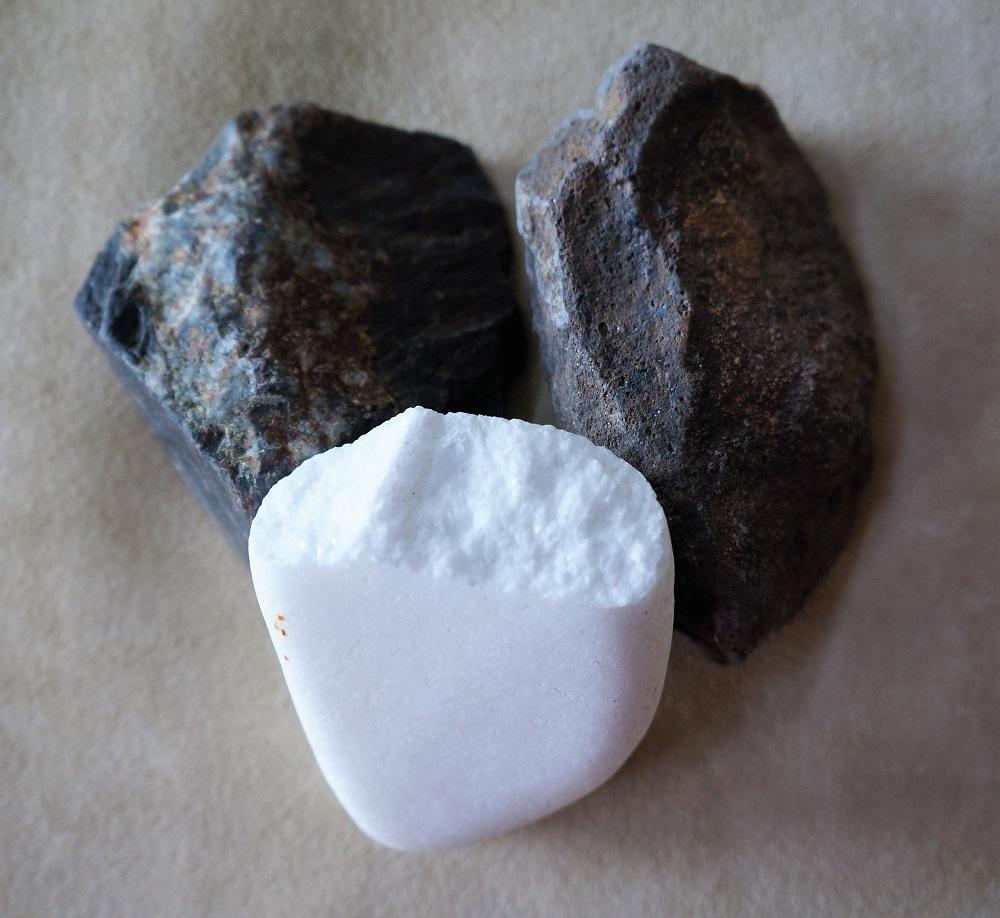 High quality marble and emery are both found on the Greek island of Naxos.

Recently, geologists found hard flint (or chert) specimens near the seaside town of Stelida, containing hematite, barite and zircon, while archaeologists argue that the Stelida material provides the first evidence of Neanderthal settlements on the island, reiterating the importance of flint as a weapon, tool or surgery implement which attracted these peoples to the island of Naxos instead of somewhere else with no flint.

Marble is only 3-4 on the Mohs hardness scale, and is considered a ‘soft’ material compared to hard gemstones. It can be shaped and chiseled with metal tools rather than diamond tools.

The marble from Naxos was a very significant ancient deposit, and it is still quarried today. The Naxian marble is over 98% calcite with traces of dolomite and pyrite. It displays randomly-spread, rather large calcite crystals up to 15mm in diameter, making the Naxian marble one of the largest-grained marbles on Earth.

The crystals are usually transparent, a quality that gives the stone an appearance of depth and a blue-grey shimmer. One of the oldest ancient marble quarries in Greece is in the northern part of Naxos, high in the mountains above the seaside town of Apollonas, where an unfinished statue of Dionysos, 10.7 meters tall (over 32 feet) and weighing around 80 tons, was found. 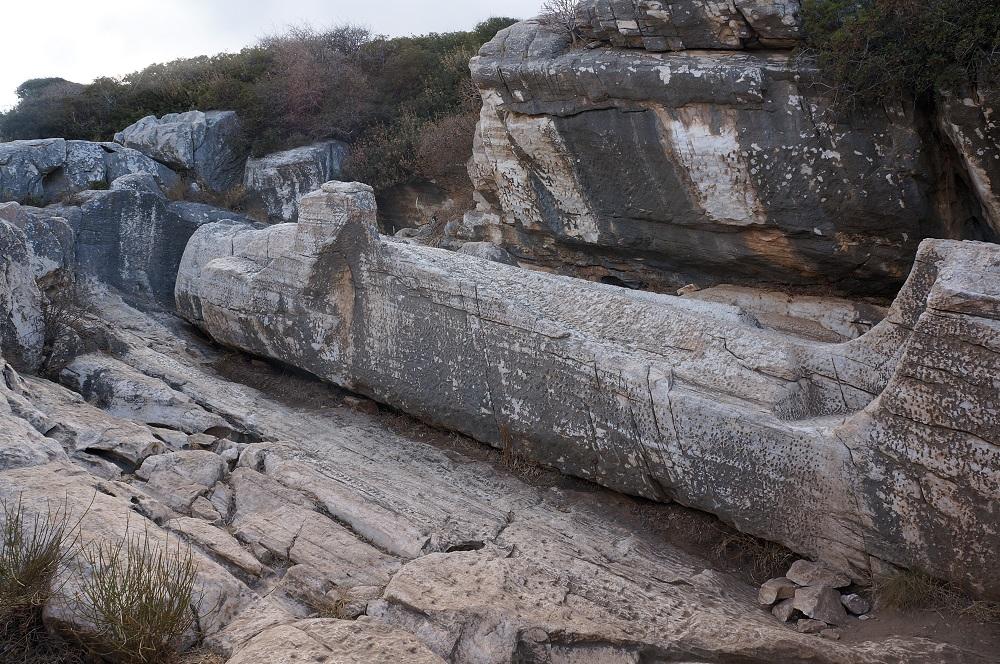 When my husband and I recently visited the island of Naxos, reaching these remote sites by driving over the high mountainous terrain was not an option for us. Therefore, for two days, we joined the Naxos Bus Transfer Tours, on both of their island route tours. Getting to the Apollonas ancient marble quarry site itself was an accomplishment.

The quarry is high up on the hill, and we had to climb fifty large, almost vertical steps. But once we reached the top of the hill out of breath, the sight of the colossal statue lying down on a rough stone slope was truly breathtaking. 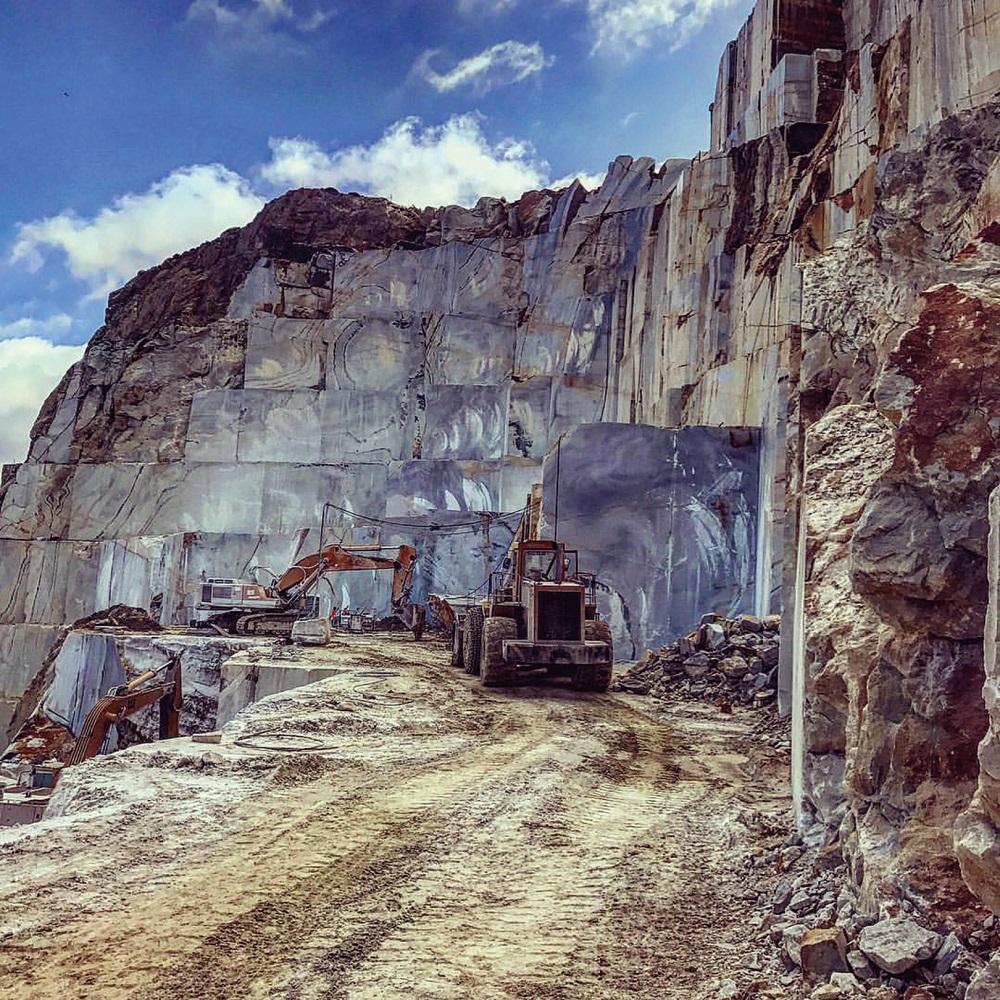 A modern marble quarry located near the village of Kinidaros in Naxos. Image courtesy of Manolis Manolas.

Emery is a very hard rock, a mixture of corundum (aluminum oxide Al2O3), magnetite and hematite, along with 32 other minerals (4).

It is a dark grey or black-coloured granular rock and it has been made into powder and used as an abrasive agent for thousands of years. The hardness of emery varies, and consequently so does the quality, as it depends on the corundum (Mohs 9) and spinel (Mohs 8) content as well as the softer magnetite (Mohs 6), setting the hardness of emery between 7 and 9 on the Mohs scale.

Read more: Reviving the Pearling Industry in the UAE

Natural emery is crushed and used in making emery cloths for sanding, emery boards or files, or most importantly as a powder for sanding and polishing metals and stones. Today it is also used as a traction enhancer for applications that require highly anti-slippery properties, such as tarmac and fire-resistant surfaces, pavements, airport runways and loading ramps. 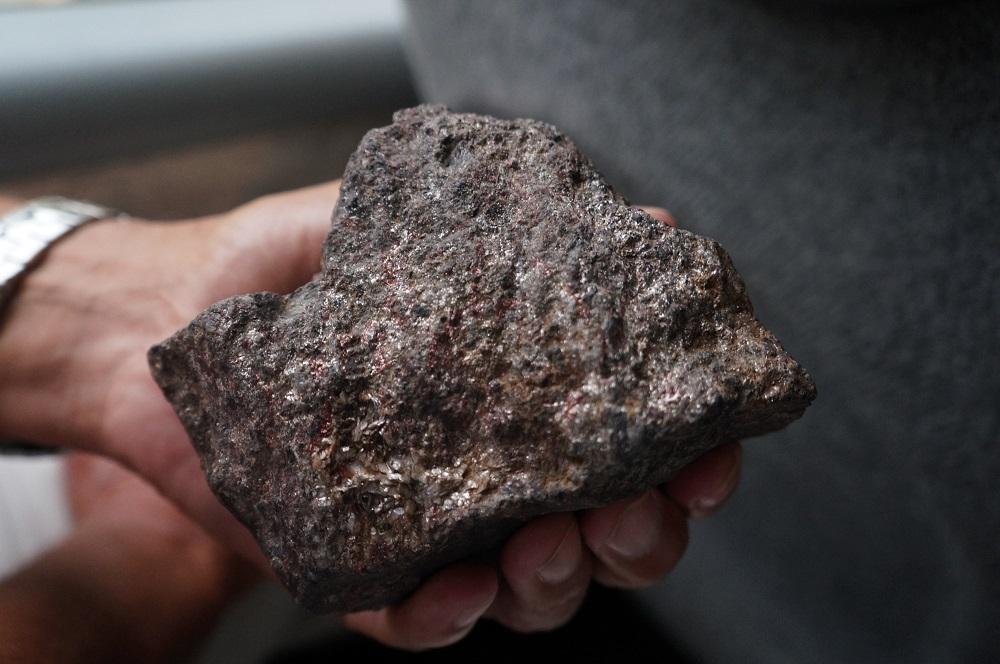 The Greek name of emery is ‘smyris’ or smirida (smirigli in the local dialect of the lapidary and metal-smithing community). The Romans called emery Naxium. The earliest mention of emery by its scientific name is by Greek gem engraver Dioscourides (65-30 BC): “The smyris is a stone with which gem engravers polish the gems.” (Natural History of Precious Stones and Gems, C.W. King 1865).

Emery is found in large quantities on the slopes of Mt. Amomaxis of Naxos, between the villages of Koronos and Apeirnthos. About 50 mines have been operating in recent years with about 500 workers. Mines feature narrow entry points and labyrinth galleries, some reaching 600 meters depth.

Mining emery in Naxos is a dirty and very strenuous manual labour. Miners use jack hammers to break the extremely hard rock, then break off the rocks with large picks and carry it with their hands to iron carts; then they break it down into smaller cut pieces with sledge hammers. Manolis Manolas, an elected local official for nearly 40 years and past president of the Union of Naxian Emery Workers, was very kind in providing me with information and photos of the emery mines. 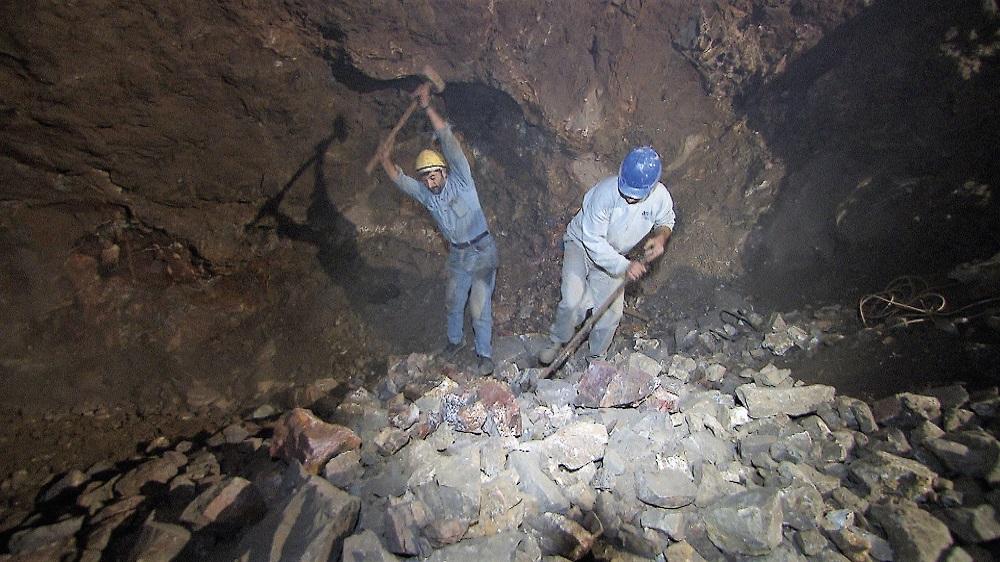 An advocate for the emery miners’ rights, supporting their struggle to keep the mines open, Manolas has also supported the building of an Emery Museum, which unfortunately stands unfinished since 1998. Natural emery has become almost obsolete with the advent of silicon carbide (SiC), also known as carborundum. It is a compound of silicon and carbon that has been mass-produced since 1893 for use as an abrasive, and has become a popular lapidary abrasive due to its low cost of manufacture.

The complex mineral composition of natural emery, however, gives it an elasticity property that makes it hold together better than the man-made products.

The Natural History Museum and the Geological Museum of Naxos

The Natural History Museum and the Geological Museum are both located in the remote and picturesque mountain village of Apeiranthos, about 32 kilometers from the capital Naxos Town.

Both museums were established in 1996. We received an amazing warm welcome from both museum guardians, Eirini Bardani (Natural History), and Argyro Karapati (Geological) who has over 20 years of experience. They both made a huge effort to tell us the story of the exhibits and the museums in the short time we had available.

Also on display are obsidian blades and sulphur from the neighboring volcanic islands of Milos and pumice from Santorini, along with other volcanic minerals from Mount Vesuvius and Mount Etna in Italy, as well as an array of minerals from around the world. A wonderful section of the museum is dedicated to Greek marbles, with samples of white, semi-white and crystallina Naxian and Parian marbles. 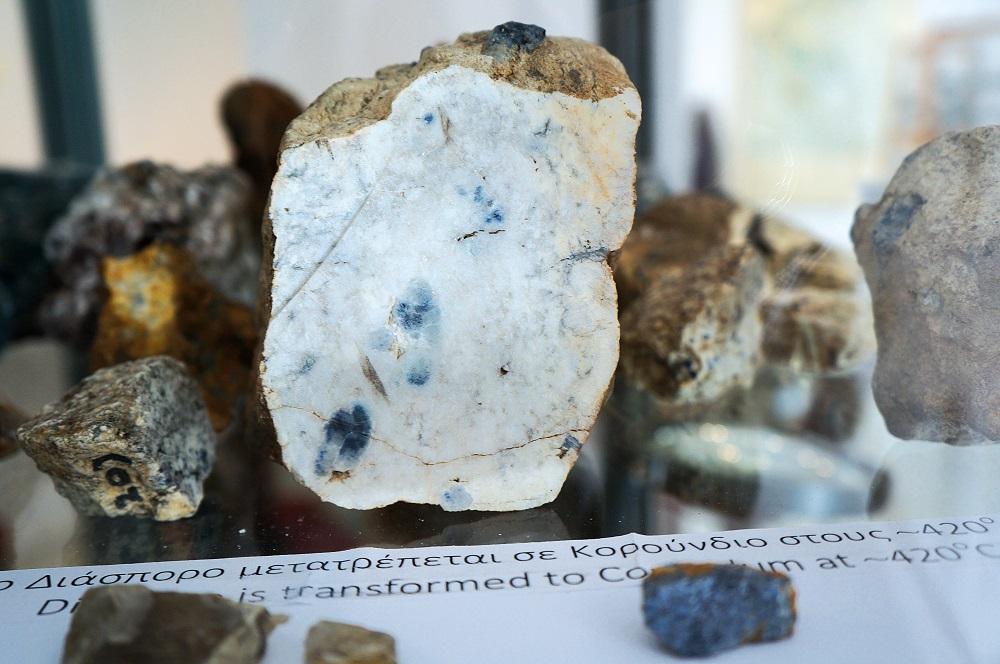 Naxite - a white marble with distinct crystals of blue sapphire.

Also included are stalactites and stalagmites from caves from Naxos, and aragonites and dolomites from the Cyclades and other parts of Greece, and a rare smithsonite from Laurion. A large part of the exhibit is devoted to the local emery: mineral specimens, data, maps and tools, and emery products for sanding and polishing (grit, blades, sanding paper and emery wheels).

I was also drawn to the unique mineral specimens called naxite, which are white marble with distinct crystals of blue sapphire.

The Archeological Museum in Naxos Town is located inside a Venetian castle, built between 1600 and 1800 AD, which has been declared a historical monument itself. The museum houses art and objects of daily use dating from the Late Neolithic period toEarly Christian times (5300 BC – 5th c. AD). Astounding is the quality and quantity of the Early Cycladic marble figurines.

Cases upon cases are filled with these flat, minimalistic sculptures. The collection is considered second only to the one at the National Archaeological Museum in Athens. What also drew my attention were the beautiful gold jewellery and stone bead necklaces. A stunning display of gold rosettes from a decoration of a wooden chest or a dress, from the 12th c. BC, highlights a level of prosperity. 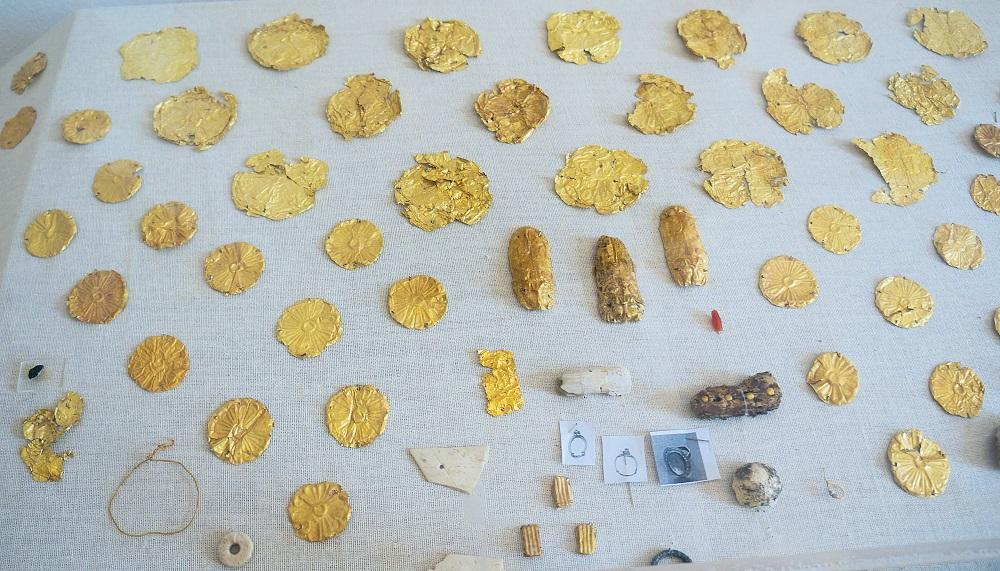 Gold rosettes from the 12th century BC or the Late Mycenaean period.

I was truly amazed with the fine craftsmanship of a necklace with twenty gold beads graduating in size and four gold sheets stamped with a representation of a child from the same Late Mycenaean period.

Also exhibited were finely engraved seals, some cylindrical others lenticular, in carnelian and agate, and carved beads in what seemed to be green serpentine, rock crystal, carnelian and shells. I am always awed by the labour my fellow anient lapidaries, sculptors and goldsmiths invested in their pieces, mastering their art. 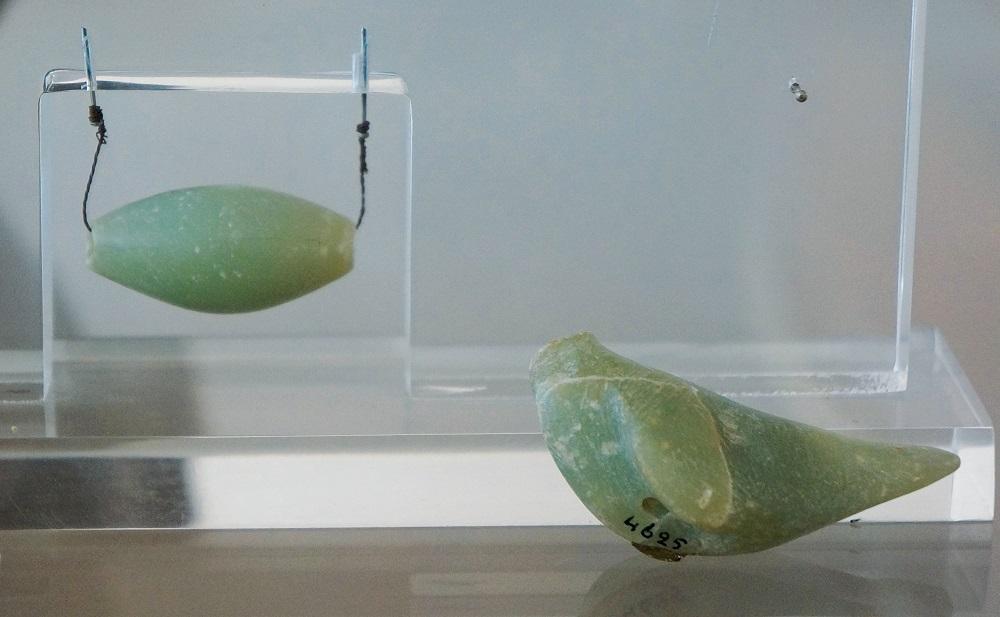 Beautiful carvings (more than 3,000 years old) in what appears to be green serpentine at the Geological Museum of Naxos.

With a backdrop of fine sandy beaches and mountainous beauty, splendid archaeological exhibits, rare mineral exhibits, the magic of the Aegean Sea and its iconic sunsets, the island of Naxos is a terrific destination for a Greek island vacation. ■

All images courtesy of the author unless otherwise stated.

This article was originally published in the Autumn 2018 edition of Gems&Jewellery. To see more issues, please visit our Gems&Jewellery Archive.

Members of Gem-A receive quarterly editions of Gems&Jewellery and its sister publication, The Journal of Gemmology. Find out more about Membership benefits, here.

More in this category: « An Interview with Dr Jeffrey Post of the Smithsonian Institution Field Trip: Screening for Tourmaline at the Oceanview Mine, California »
Tweet
Become a Gem-A Member
Apply to become a Gem-A Member
Subscribe to our Newsletter
Keep updated with Gem-A
Sign Up
Get in Touch
Can't find what you're looking for?
Contact Us