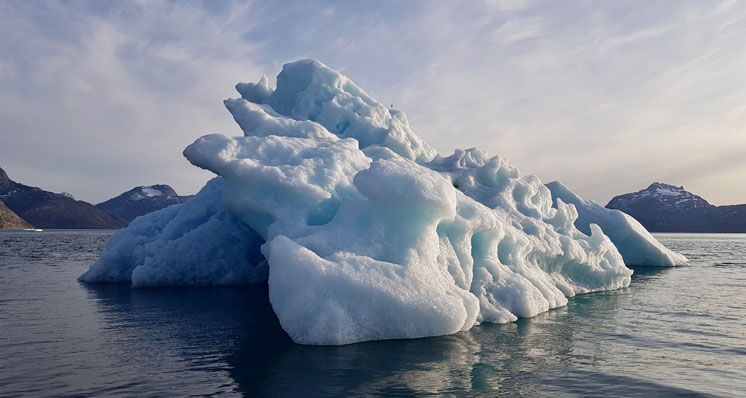 With an opulent supply of rubies and pink sapphires, mining company Greenland Ruby is set to become an influential supplier of coloured gemstones. Here, International Women in Mining board member, Deborah Craig FGA DGA, shares her experiences in Greenland.

Greenlanders call the buried treasure of blood red rubies and vivid pink sapphires Aappaluttoq or "Big Red". Mining has now begun, positioning Greenland Ruby to become one of the market's most important suppliers of coloured gemstones. The rubies and sapphires will have an ethical pedigree that is increasingly important to buyers: responsibly-mined, with a transparent chain of custody and fully-disclosed treatments.

The new mine is also important to the people of Greenland, who voted for self-rule in 2008 with increased independence from Denmark. This means taking control of the development of their mineral resources and diversifying the economy from fishing and tourism, while creating self-sustaining tax revenues. Aappaluttoq is one of the first new industrial mines to come on-stream since this change went into effect.

Aappaluttoq is nestled between sea and glacier, 150 km south of the capital Nuuk, and east of the fishing village of Qeqertarsuatsiaat. The hilly, barren land is impassable, accessed only by small boat or helicopter (1). Geologists discovered significant ruby mineralisation in 2005; years of systematic exploration revealed the Fiskenaesset Anorthosite Complex. The metamorphic rocks that host the mineralisation are thought to be 2.9 billion years old, making Aappaluttoq one of the oldest coloured gemstone deposits worldwide. 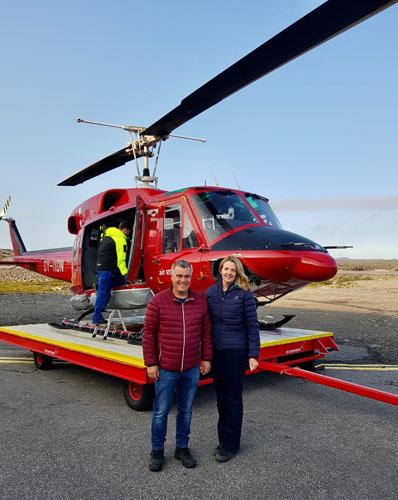 1. The author and Jens Frederiksen, VP Security & Sales, Greenland Ruby. Helicopters are needed to reach the remote mine site.

A positive prefeasibility study was completed in 2011, after sufficient drilling and resource modelling. The ore is estimated to contain 10% corundum, of which 5% is gem quality, 20% near-gem quality (i.e. with inclusions), and 75% is commercial grade. The mine's profitability will depend on maintaining these robust grades, as well as efficiently extracting the gemstones from the ore.

Larger stones are found in the deposit, but their recovery is variable and difficult to predict. Therefore, only melee-sized rough material (<4mm) was included in the study and will underpin the steady sale of gemstones to the market. In this way, an industrial mine can provide a reliable supply of stones to jewellery manufacturers, something small alluvial operators cannot do.

Construction began in 2015 at a capital cost of US$25 million. Last fall, LNS Norway, parent company of Greenland Ruby, acquired the mine when previous owner True North Gems struggled to provide sufficient funding. LNS Norway has developed other projects in remote Polar Regions, including Antarctica and Svalbard. The mine is currently expected to operate for 9 years and produce 87 million carats of rough gemstones. Greenland Ruby is mapping and sampling its nearby Siggartartulik and Kigutilik projects, hoping to expand the mine's resource base.

The mine site will operate year-round and is staffed by Greenlanders flown to the camp for 2-3 week shifts. When possible, mine supplies are sourced locally, including fresh catches from local fisherman and hunters.

Aappaluttoq is a primary, hard rock deposit, containing two ore types: phlogopite hosts the higher chromium ruby, and leucogabbro hosts the pink sapphire (2). The ore is excavated from the open pit, mixed with lake water, and sent via conveyor belt on its circuitous route through the processing plant (3).

A primary crusher reduces the size of the ore to below +60mm; a cone crusher reduces it further to below +20mm. After being washed, the crushed ore is mixed with a ferro-silicon solution (SG 2.7) in the dense media separation circuit and spun in a DMS cyclone. The heavy corundum sinks, and the lighter, floating waste material is diverted to tailings.

The corundum is separated into three size categories, before passing through a dry magnetic separator and an optical sorter. The optical sorter uses white light, a series of cameras, and a computer to identify red and pink crystals, triggering a pulse of pressurised air that separates the coloured material from the feed. The rough ruby and pink sapphire is transported from the processing plant to Nuuk, where any residual host rock is removed with hydrofluoric acid. 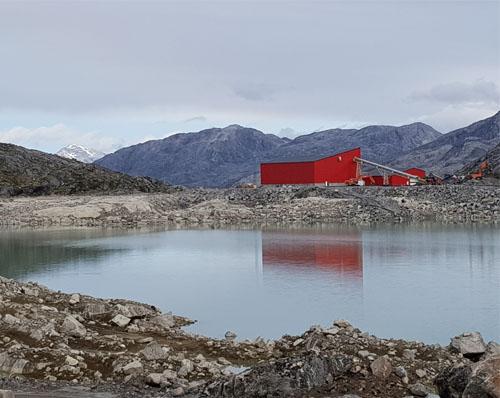 Greenland Ruby is currently calibrating its recovery process to reduce the amount of waste rock that makes its way through the system. This includes adjusting the conveyor belt speed so the optical sorter can work more effectively, and tweaking the hydrofluoric acid concentration and soak times.

The cleaned gemstones are sorted in Nuuk (4), against a customised master set of stones. First, the stones are divided into gem and near-gem qualities. Each of these qualities is then divided into four colour categories, ranging from deep red to intense pink to light lilac pink (5,6 & 7). 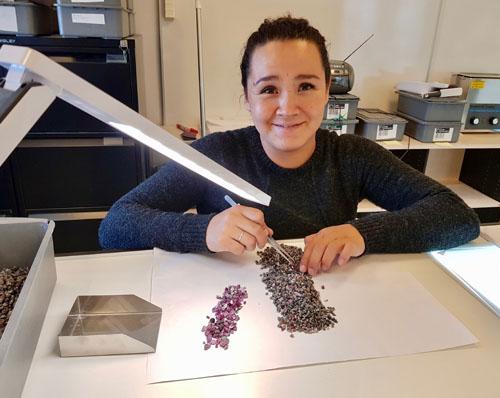 As noted by Christopher P. Smith, Andrew J. Fagan and Bryan Clark Craig in their article 'Ruby and Pink Sapphire from Aappaluttoq, Greenland' (The Journal of Gemmology, Volume 35/ No.4, 2016, pp.294-306), the stones have metamorphic-metasomatic type rubies and sapphires from other world deposits, including Montepuez.

They exhibit moderate to strong dichroism, have no visible colour-zoning, are are relatively high in chromium and iron and low in titanium, vanadium and gallium. Inclusions include clouds of minute rutile particles and some fine rutile needles, as well as arrowhead-shaped platelets. 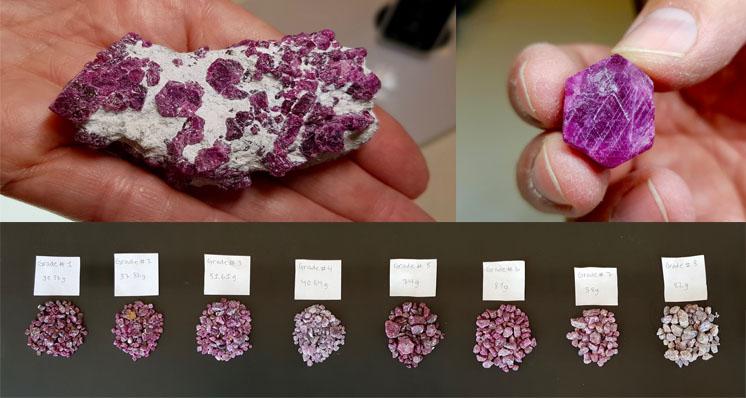 As Aappaluttoq is a primary deposit, the gemstones have been subjected to intense pressure and are most likely fractured. Removing the stones from their host rock is also difficult. This means that the majority of stones will need to be treated to improve their transparency, a process that also reduces their purple undertone. Treatments will be fully disclosed and the chain of custody will be carefully tracked. At present, Greenland Ruby will sell the treated rough material; the feasibility of bringing lapidary in-house is being examined.

Greenland Ruby has begun a soft launch of their rough rubies and sapphires. The company believes their strength lies in their ability to provide a steady supply of quality gemstones to jewellery manufacturers. Greenland Ruby is also considering strategic partnerships with select jewellery houses, to collaborate on marketing campaigns that will highlight the extraordinary provenance of Greenland rubies.

And the Greenland government and Greenland Ruby have the opportunity to develop an origin certification scheme, like the one that made Canadian diamonds a success story in a market increasingly looking for ethical sourcing alternatives.

All that is red is not ruby on Greenland (8) - tugtupite, Greenlandic for "reindeer blood", is a silicate closely related to sodalite. Tugtupite is a much sought-after opaque to translucent, becoming redder in sunlight. Nuummite, meaning "from Nuuk", is a black opaque gemstone that exhibits iridescent flashes of colour due to its lamellar, fibrous structure (9). 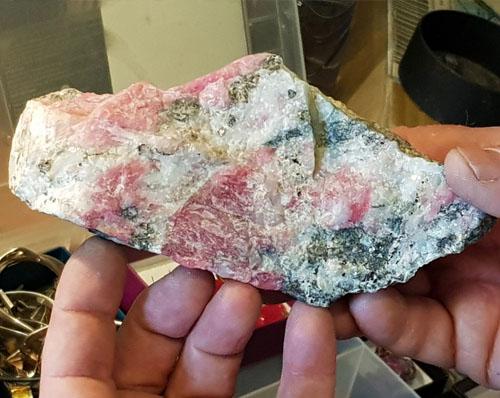 8. Tugtupite in matrix: the gemstones becomes redder in sunlight.

Greenlandite (10) combines quartz and fuchsite to produce an opaque green stone that may be streaked with black schlieren or flecked with pyrite. Small scale miners extracting these stones have been supported by the Ministry of Mineral Resources with workshops on mining best practices, gemstone pricing and lapidary. 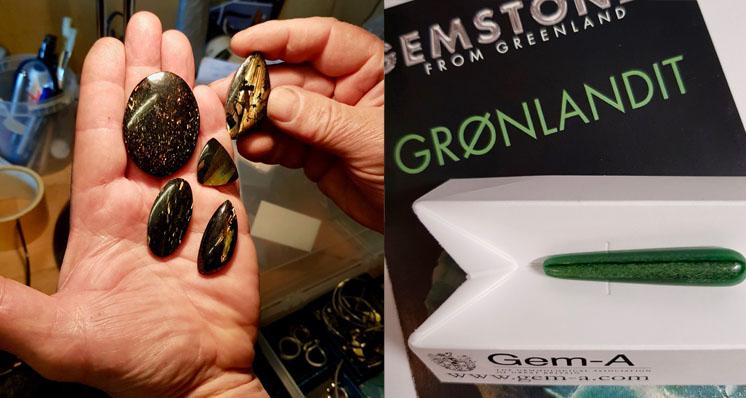 Left (9). Nuummite, only found near Nuuk. Right (10). Greenlandite with a schlieren vein.

The Ministry maintains an ongoing gemstone mapping project, compiling data from historical reports and noting when geologists and small-scale miners make interesting discoveries in the field.

Deborah Craig FGA DGA, would like to thank Greenland Ruby for sponsoring her field visit to Greenland.

Tagged under
More in this category: « The Source of Garnets Found at The Arikamedu Archaeological Site in South India Ruby and Pink Sapphire from Aappaluttoq, Greenland »
Tweet
Become a Gem-A Member
Apply to become a Gem-A Member
Subscribe to our Newsletter
Keep updated with Gem-A
Sign Up
Get in Touch
Can't find what you're looking for?
Contact Us