From beautiful carved gemstones to cultural inspirations, the Indian style in Art Deco jewellery reflects a fascination with global cultures during the 1920s and 1930s. Here, Sarah Duncan, head of the jewellery department at London-based Chiswick Auctions, offers a beginner's guide to the Indian style in Art Deco jewels, presenting some helpful insights for anyone developing their historic jewellery knowledge.

A widespread fascination with all things exotic swept European and American fashions in the first decades of the 20th century. In 1910 the famous designer Paul Poiret revived the Persian style in women's dress and the trend for exotic jewels, largely influenced by India, grew in popularity over the following years.

There is little doubt that Cartier was one of the primary champions of this new style. However, they were not alone; Mauboussin, Dayson and Janesich all featured carved gems in their jewels throughout the 1920s. In 1911, Jacques Cartier made his first trip to India and was dazzled by the colours, particularly of their jewels.

The vibrant Indian sunlight highlighted the fluorescence in rubies and emeralds in a way the subdued northern European light never could.

Pictured above are a pair of carved emerald bead necklaces with enamelled clasps, possibly from Jaipur, northwestern India, dating from the late 18th to the early 19th century. The larger graduated strand of foliate emerald beads leads to an enamelled clasp, decorated with royal blue and white enamel, polki-cut diamonds and circular cabochon rubies in floral kundan settings on one side, and with white, red and green enamel featuring stylised birds on the other. The second, slightly smaller strand, has a similarly designed enamel clasp. They were purchased in India in the early 1950s and later sold by Chiswick Auctions in November 2019 for a hammer price of £25,000.

Maharajas and their Jewels

On his travels, Jacques Cartier brought back some of the significant gemstones the firm was becoming famous for but also a selection of smaller gemstones including some carved and antique gems. This close relationship between Cartier and several of the Maharaja’s of India led to the creation of two different types of gems. The first were the commissions on behalf of the Maharajas to reset their own jewels or loose gems into bespoke creations beautifully melding Indian and Western styles. Recent blockbuster exhibitions and auctions have highlighted several of these jewels in the past few years. The second type was the creation of similar examples either for stock or through commissions by western customers wanting to encapsulate this pseudo-Indian style.

While these new creations were appearing, there was also an emergence of new gemstone cutting techniques. In the 1920s there was great interest in new styles of gemstone cuts. Indeed, the modern brilliant-cut for diamond was first developed in 1919 by Marcel Tolkowsky. Other cuts being introduced at the time included calibré, trapeze and half-moon cuts. The carving of gemstones, well established for centuries in India, found a new appreciative audience in European jewellers.

The combination of these two popular factors, the exotic Indian designs and emerging gemstone cuts, helped to create what was known at the time as "Hindou" jewels, later renamed "Tutti Frutti" in the 1970s. Usually made for the western market, these jewels did not necessarily focus on monumental gems in the way that the Maharaja’s jewels did. But instead these "Hindou" jewels were frequently set with carved emeralds, rubies and sapphires. The trick that made them so distinctive was to set these varying coloured stones all together in an explosion of colour.

In the 1920s a more pared back mixture of gemstone tones was used, however by 1930 far more vivacious creations were emerging. Trying to capture the vibrances of colour Jacques Cartier saw in Jaipur enamels, these multicoloured creations were very different to contemporary jewels.

Often overlooked is the impact financial constraints had in popularising these jewels. Any lapidary will tell you, the finest gems would typically be faceted, not carved. These carved stones were generally not as expensive as the showstopping gems which most jewellers prided themselves on offering. The focus of these designs was on the vibrancy of colour, therefore transparency and clarity would take a backseat to the importance of tone. In the stark economic realities of the years immediately following the stock market crash of October 1929 these jewels provided a welcome opportunity for jeweller and client alike to acquire a fashionable piece of jewellery which wasn’t necessarily at the top price point.

Today these jewels are considered amongst the most desirable. It is easy to see why these jewels have never really gone out of fashion. Their distinctive appearance makes them instantly recognisable. The romance and exotic flair which these jewels encapsulated almost 100 years ago still holds true today. 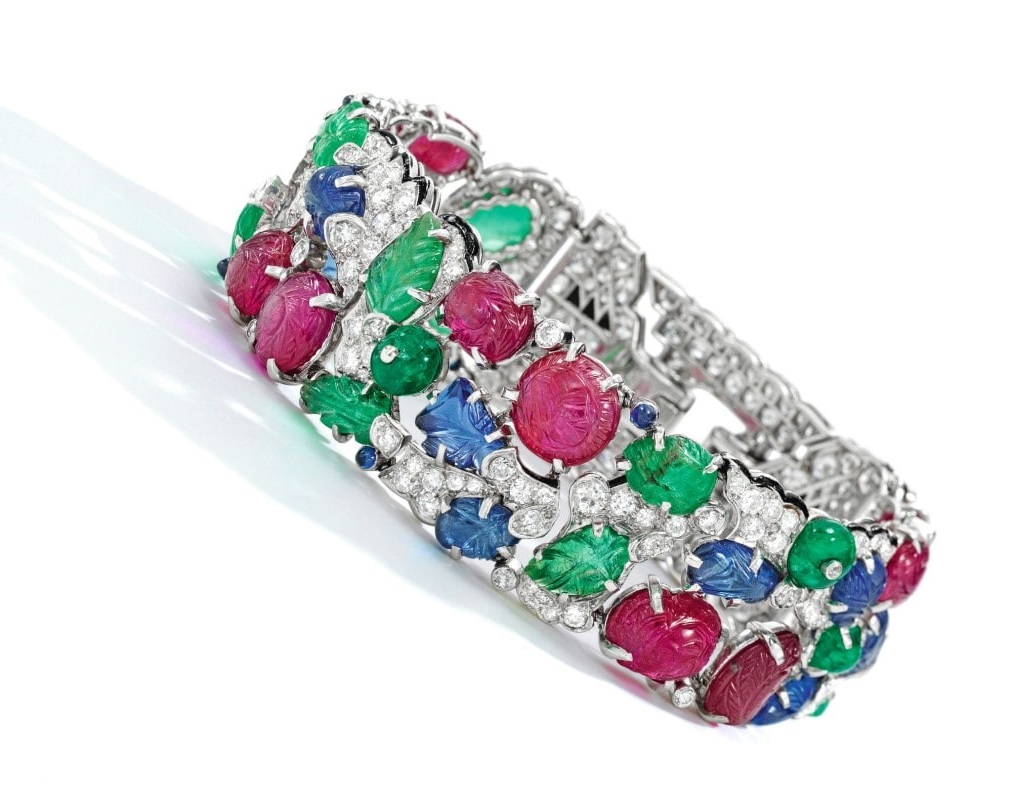 A good example of Tutti Frutti jewels at auction can be found pictured above. This gem-set, diamond and enamel Tutti Frutti bracelet by Cartier, circa 1930, was sold via online auction by Sotheby's in 2020 for US $1,340,000. The bracelet caused a stir thanks to it having never appeared at auction before. It far exceeded its estimate of US $800,000, making it the most expensive jewellery piece ever sold in an online setting.

According to Sotheby's: "Cartier produced a variety of tutti frutti jewels and objects, both for stock and special-order, with bracelets being the most sought-after form. All pieces share the hallmark of Mughal-cut colored stones, but each piece is unique, a variation on a captivating theme. The present lot is distinguished by the vibrancy of its gemstones-with rubies predominating-and by the lines of black enamel, placed intermittently along the trim of various elements.The enamelwork is applied to just one side-a particularly clever flourish-echoing the organic asymmetry of the foliate elements.The bracelet returns to a more traditional Art Deco aesthetic with its pavé-set diamond clasp, highlighted by onyx triangles and chevron-shaped closures. The overall design, and execution, is unmistakably Cartier."

For further reading, Gem-A Members can delve into the Autumn 2019 edition of Gems&Jewellery magazine and find out more about the Al Thani Collection, as well as a number of Indian and Mughal jewellery pieces sold by Christie's in 2019.

Develop your gemmology knowledge and understanding of fine jewellery, both historic and contemporary, via the Gem-A Gem Hub. To find out more about our courses, including online learning, short courses and the world-renowned Gem-A Gemmology Diploma, click here.

More in this category: « Nuummite – the Origin of Colour The Unusual History of Caesar's Ruby »
Tweet
Become a Gem-A Member
Apply to become a Gem-A Member
Subscribe to our Newsletter
Keep updated with Gem-A
Sign Up
Get in Touch
Can't find what you're looking for?
Contact Us