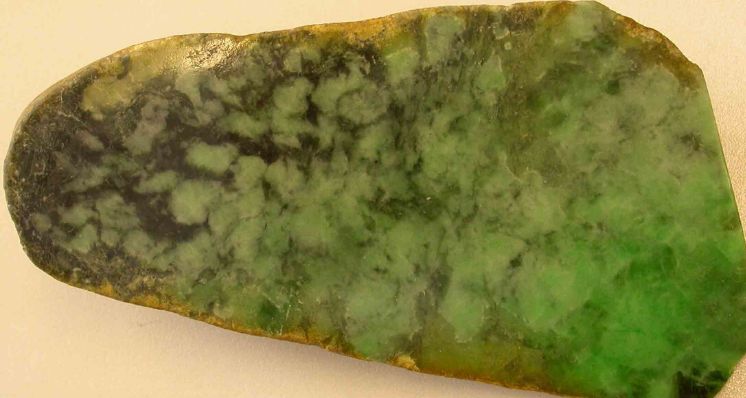 One of the oldest loved gems in the world, jade has long been revered by gem lovers internationally, but nowhere more so than in China. But what is it that makes this gemstone so special? Gem-A's Assistant Gemmology Tutor Dr Juliette Hibou FGA gives us an overview of jade, how to identify it and its significance in Chinese culture.

From the emperors of China, who considered it a heavenly gem, to Cartier, who featured it in the finest Art Deco jewellery designs, jade remains an eternal and mystical stone, an object of fascination and desire, often referred to as ‘inscrutable’, ‘mysterious’ and ‘enigmatic’.

Getting to Grips with Jade Terminology

Jade's definition and means of identification are manifold and have evolved over the centuries. Historically, the term jade mainly referred to nephrite jade which was mined and highly prized in China for millennia. In 1863 French mineralogist Alexis Damour analysed the chemical composition of a Burmese jade (mined only since the late 18th century) and a Chinese jade carving, and uncovered their differences. Since then, jadeite and nephrite are recognised as two distinctly different materials which are both known as ‘jade’. 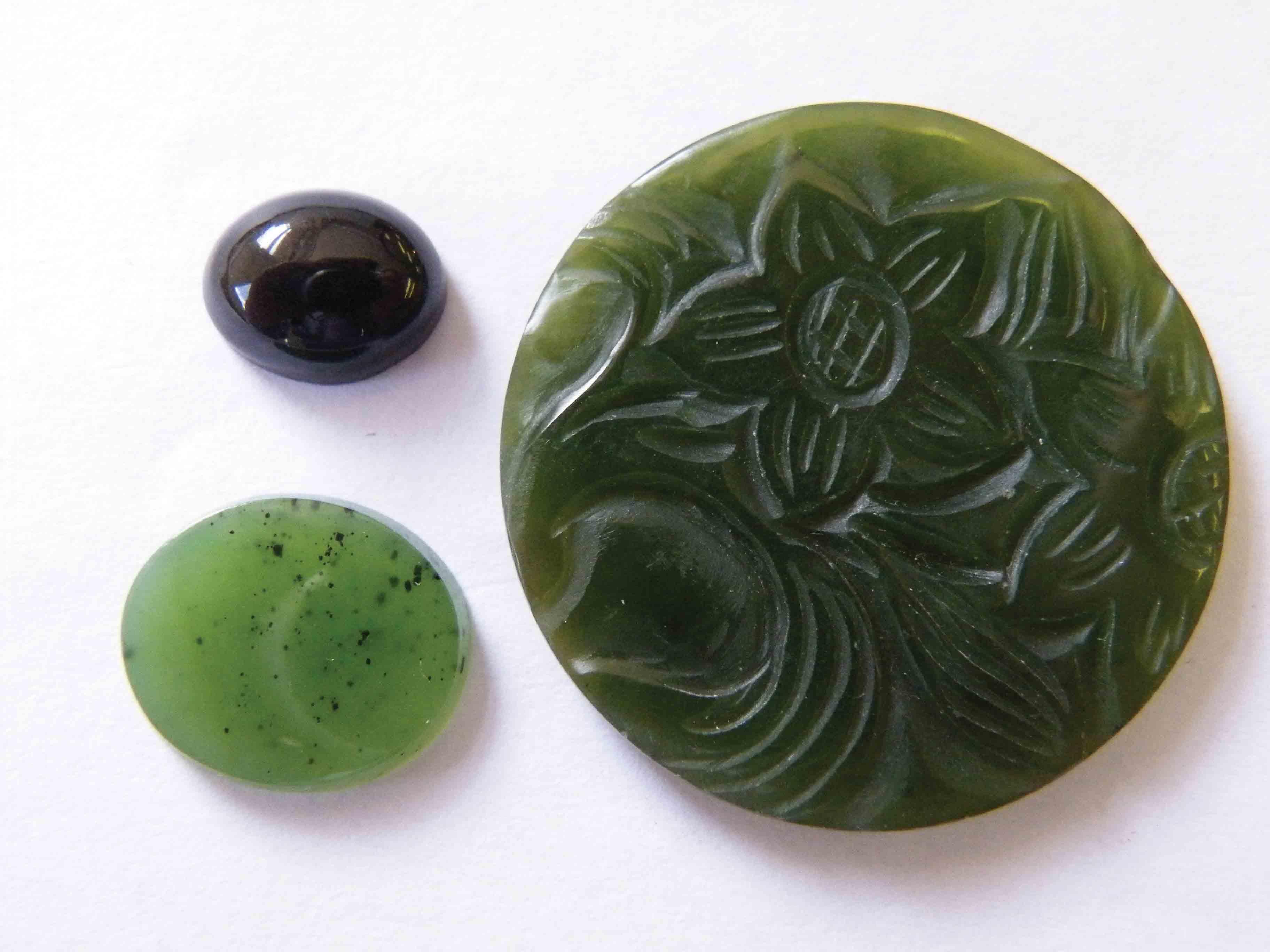 Nephrite is a cryptocrystalline mineral of calcium magnesium iron rich silicate with hydroxyl: Ca (Mg Fe)5 Si8O22(OH)2. It is part of the amphibole group, in the fibrous variety of the tremolite-actinolite mineral series.

Being a widely available material, nephrite has played an important role in many civilisations such as the Maoris who call it Pounamu (‘green stone’). It is in China however that it has had the greatest importance, going back 5000 years. Nowadays, Chinese nephrite production, from the Kulun Mountains in Western China, is shrinking and nephrite is supplied mainly from Canada (British Columbia).

Jadeite is a polycrystalline sodium aluminium silicate: NaAl(SiO3)2 and is part of the pyroxene group. Jadeite is rarely found pure and is generally a rock primarily of jadeite with small amounts of other minerals, notably kosmochlor and omphacite. 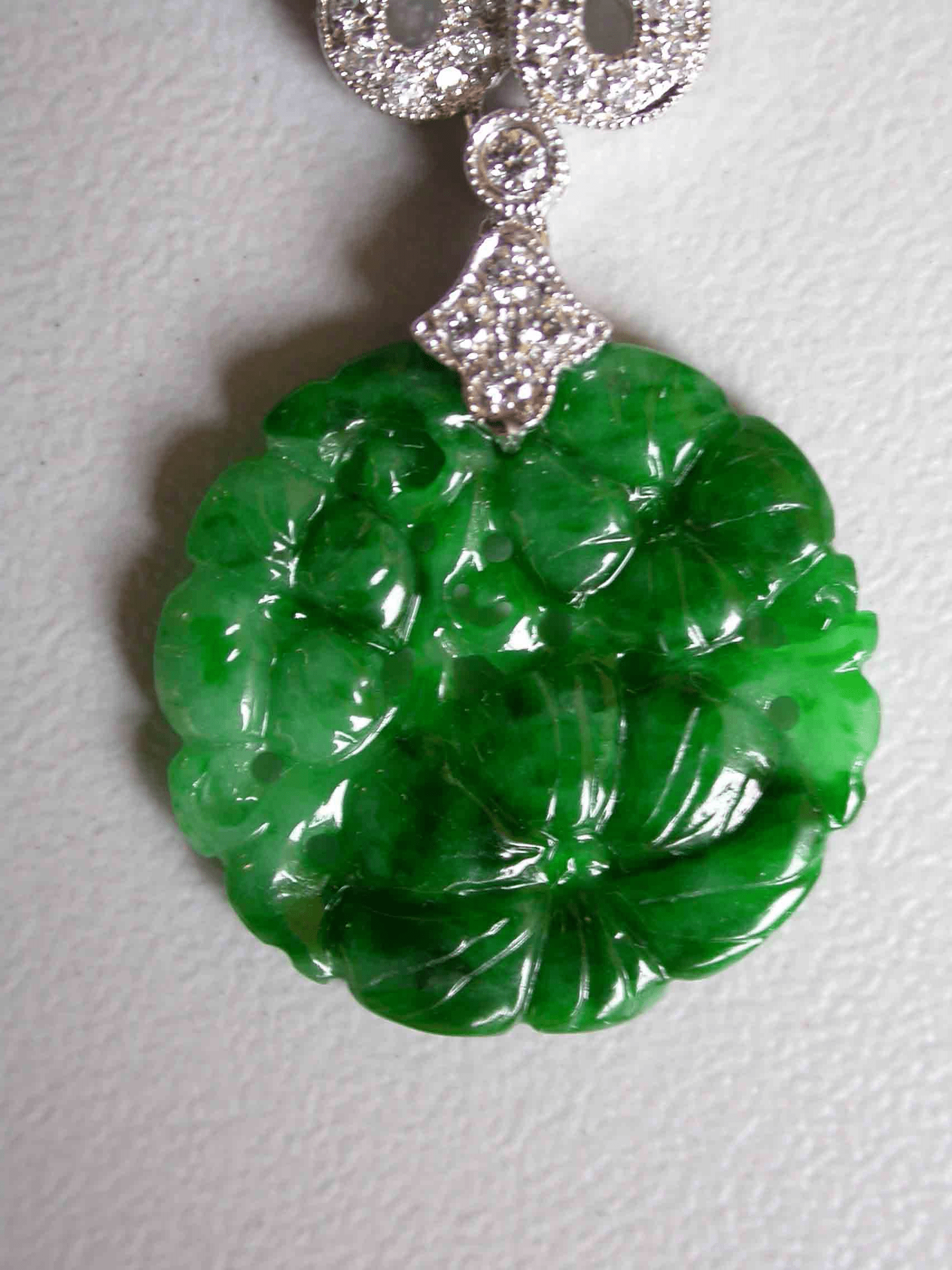 Jadeite was first imported to China only about 250 years ago, from Northern Myanmar (Uru River Valley, Kachin State) which was then under Chinese power. Today the region remains the primary source of jadeite.

Jadeite was also found in present-day Guatemala (Motagua river valley) and played an important role in the Olmec, Mayan and Aztec Pre-Columbian civilisations. Its green colour was associated with water, vegetation, especially corn, and life more generally, and was incorporated into many rituals. Early Spanish conquerors were intrigued to see that this green stone was far more highly esteemed than gold among local people.

A metamorphic rock, jade is found in alluvial deposits across the world as boulders and pebbles of various sizes. It is a versatile material, with a range of applications from carved objects to fashioned beads and cabochons. There are many factors that make jade a desirable gem material and help towards its identification.

Nephrite and jadeite are polycrystalline materials made of minute interlocking crystals and are both extremely tough materials. Nephrite, with its fibrous texture, is the toughest gem. 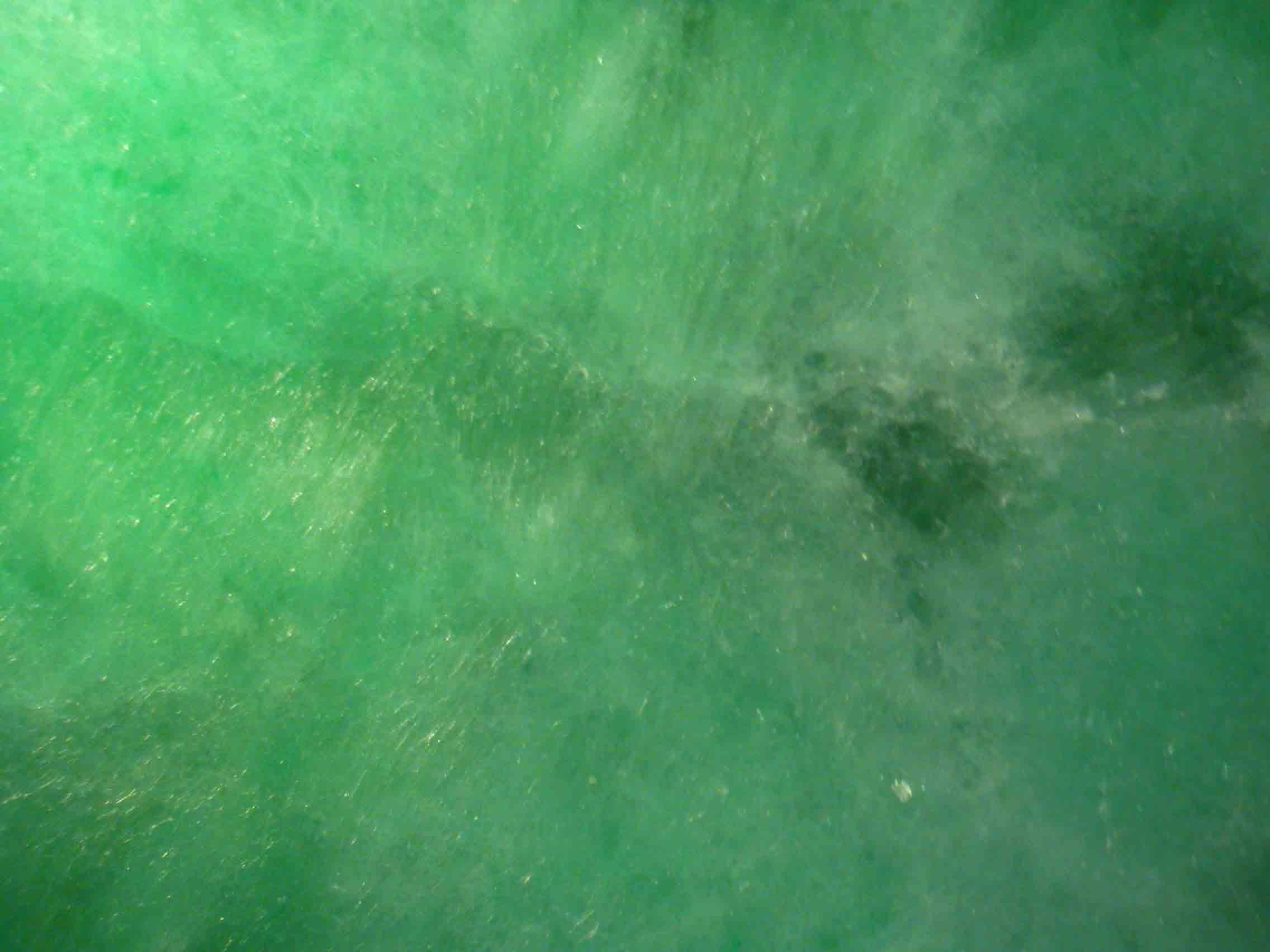 Jade is highly resistant to breakage and chipping and is therefore highly durable. This was recognised in Pre-historical times, when the stone was worked to make tools, weapons and utensils as it did not break easily and could maintain a strong sharp edge. Jade is also a relatively hard stone, with nephrite at 6.5 and jadeite at 7 on Mohs’ scale of hardness, and is therefore relatively resistant to abrasion.

The wide variety of colours jade can appear in makes it a particularly appealing stone. The palette includes colourless, white, yellow, orange, green, lavender and black. Green and lavender jadeite are the most appreciated – and imitated. The finest jadeite is almost transparent with a pure, vibrant emerald green colour due to chromium, and known as ‘Imperial jade’. Spinach green nephrite, coloured by iron, is the most prized, together with the translucent white ‘mutton fat’ variety. An even colouration or an attractive mottling of colours are elements that also make jade desirable.

How Does Jade Interact with Light?

Jade’s transparency ranges from highly translucent to sub-translucent; the more translucent, the more valuable the specimen.

Jade has a soft, greasy to vitreous lustre, jadeite having usually a higher surface lustre than nephrite because of its higher hardness. This lustre varies with the quality of the polish and the presence of any surface treatments such as bleaching and impregnation.

Jade is a very tactile material, with a soft, firm, smooth texture. Many experts insist on touching jade as part of the identification process.

According to G. F. Kunz, Jade has been regarded by the Chinese as ‘the musical gem par excellence’, and has been used as a percussion instrument for centuries. The imperial court in China had nephrite chimes and bells designed to ring specific tones. Chinese composer Tan Dun, when commissioned for the official award music for the 2008 Beijing Olympic Games, decided to mix the sound of ancient bronze bells with the lighter sound of jade instruments.

Observation is key when it comes to testing jade. The cryptocrystalline structure of nephrite cannot be seen even under magnification. Jadeite on the contrary can show a strongly granular structure of interlocking pyroxene crystals, sometimes looking more fibrous in any intensely green areas. Some translucent varieties such as water jade show very little structure. 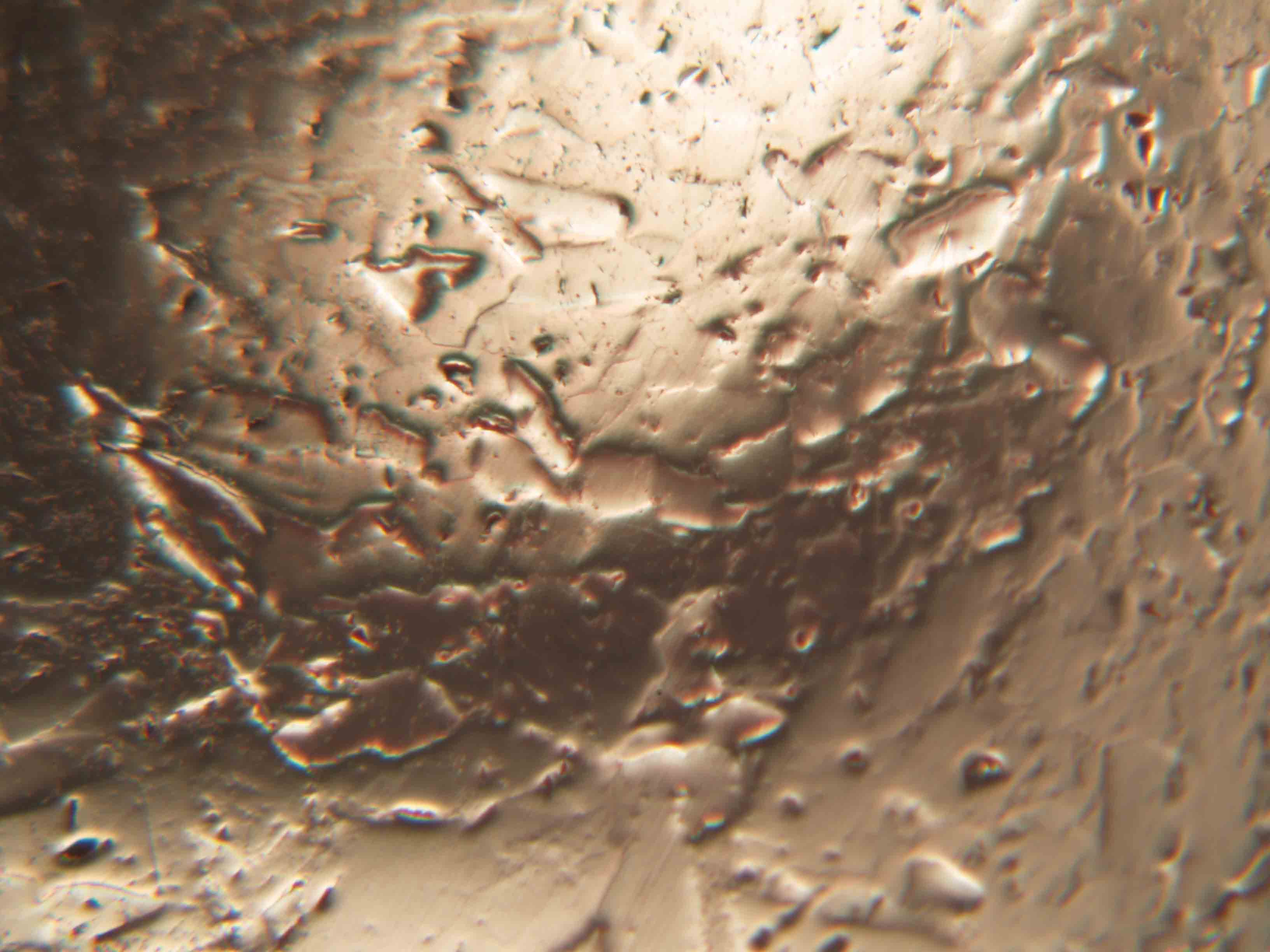 The 'orange peel' effect visible on the surface of a jade specimen. Image by Pat Daly, Gem-A.

As the individual interlocking grains can vary in hardness, depending on their orientation, the polishing process may produce a distinctive dimpled or ‘orange peel’ effect on the surface. This is a feature unique to jadeite and a key identification factor. More recent use of diamond grit has made the dimpling less apparent and resulted in a higher lustre. This makes it easier to potentially tell the older pieces of jadeite from modern ones.

The Refractive index for jadeite is typically 1.66 while nephrite reads at 1.62 using distant vision on the refractometer.

Jade is most highly valued in Chinese culture today. The philosopher Confucius reportedly expressed this fascination by making jade a metaphor for virtue, kindness, wisdom, justice, civility, music, sincerity, truth, Heaven and Earth. It is believed to possess the power to avert evil and bad luck while fostering health and good fortune.

Read more: Why are Some Gemstones Associated with Bad Luck?

During the early Chinese dynasties (c. 2070-256 BC) jade was used exclusively by royalty and nobility. There is no coincidence that the Chinese character Yu which designates jade – and more generally beauty and preciousness – is very similar to the character Wang which refers to the king. Hence ritual objects in jade were used by Chinese emperors.

Gui or jade tablets were used by the emperor to communicate with supernatural forces and became a symbol of power when worn by the emperor or the court dignitaries. 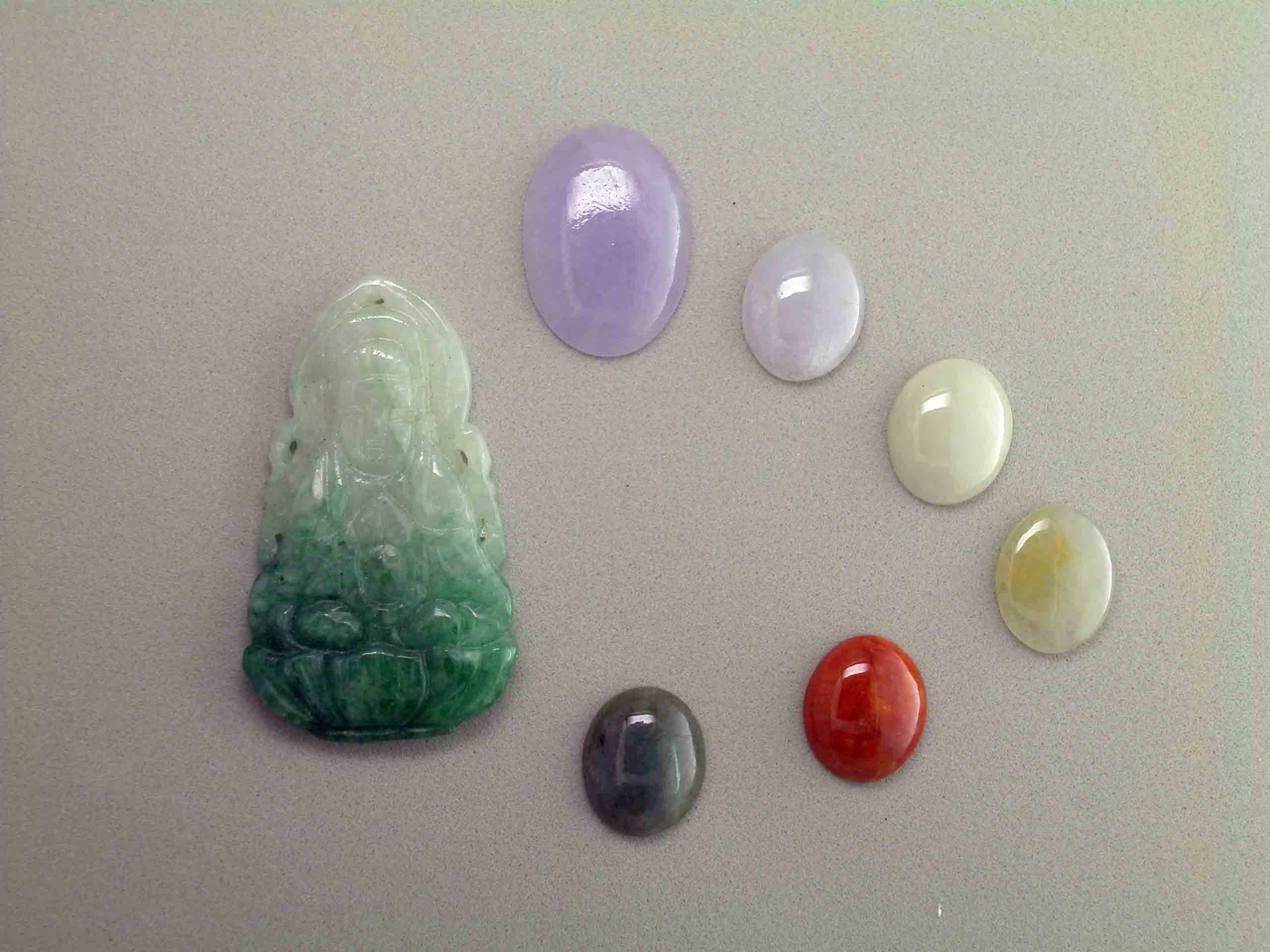 A jade carving alongside six jade cabochons in various colours. Image by Gem-A.

A Chinese saying states that ‘you can put a price on gold, but jade is priceless’. Jade has indeed a special significance in China and today the market is led by China’s economic growth. The demand for quality jade has been soaring since the turn of the century, with prices rising tenfold in the first decade.

Overall, high quality jade may be compared to certain rare colour diamonds, with prices per carat far above ruby or sapphire. Some exceptional pieces, with unique provenances, have fetched incredible prices, such as the green nephrite seal of the eighteenth-century Chinese Qianlong Emperor, which sold for $15.7M at Sotheby’s Hong Kong in 2010, or Barbara Hutton’s legendary imperial green jadeite necklace mounted by Cartier, which fetched $27.22M at Sotheby’s Hong Kong in 2014.

Fetching extraordinary prices such as these, it is safe to say that today jade still seems to be esteemed as a beautiful and highly desirable gemstone and it appears that it will continue to be loved and revered internationally for many years to come.

Interested in developing your knowledge on gemstones? Take a look at our Gemmology Foundation course.

Do you have a passion for gemmology but are new to the field? Take a look at our upcoming Introduction workshops.

Tagged under
More in this category: « Ruby and Pink Sapphire from Aappaluttoq, Greenland What Are the Most Important Gemstone Producing Countries in the World? »
Tweet
Become a Gem-A Member
Apply to become a Gem-A Member
Subscribe to our Newsletter
Keep updated with Gem-A
Sign Up
Get in Touch
Can't find what you're looking for?
Contact Us