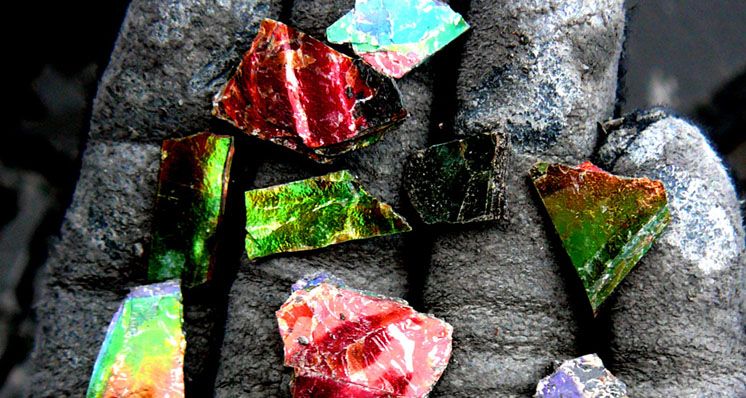 Korite is at the forefront of ammolite mining and production, with plans now in place to expand its operation in Canada. Sarah Jordan speaks to the company's president, Jay Maull, to discover how a booming Chinese market, Feng Shui and adventurous jewellery designers are supporting this fascinating gemstone.

The buzzing, cosmopolitan city of Calgary, in Alberta, Canada, may be more famous for its skyscrapers and its role in Canada’s oil industry, but dig a little deeper and you will discover the city plays a unique role in the global gem industry.

This area of Canada – Southern Alberta’s Bearpaw Formation – produces more than 90% of the world’s ammolite; a gemstone composed of aragonite and derived from fossilised ammonite shells that are more than 70-million-years old. The company behind this production – Korite – is at the forefront of mining, producing, finishing and promoting ammolite across the world, with its jewellery and home décor items now available in more than 28 countries. 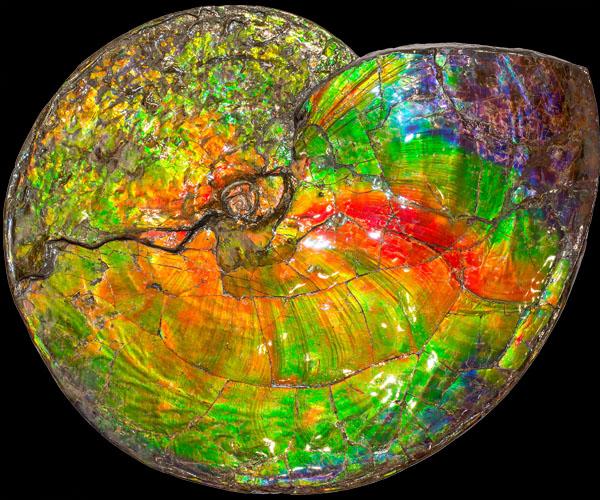 A complete ammonite fossil with the signature colourful ammolite shell.

Korite has been devoted to ammolite for 35-years and its efforts have certainly paid off. Earlier this year, it was announced that the company’s mining activities will expand by eight acres, taking total production up, by around two million carats, by the end of 2017. This shift has largely been caused by increased awareness of and demand for ammolite, which was only certified as an official gemstone by the World Jewellery Confederation (CIBJO) in 1981. Its vibrant, colourful appearance and reputation as nature’s rare ‘sleeping beauty’ has all added to its unusual mystique.

Korite president Jay Maull explains: “We believe we are just on the tip of ammolite going mainstream, both in terms of jewellery and home décor. We are in discussions with several major jewellery companies to carry our products and our gemstones in their products. We are concentrating on the United States. Ammolite is being fast-tracked because of modern day communications and the internet – we can be all over the world with the product.”

Ammolite is derived from the fossilised shells of ammonoids – an extinct group of marine mollusc cephalopods that are closely related to today’s octopuses, squid and cuttlefish. Ammonite fossils are relatively common; the name derives from their tell-tale textured spiral shape, which reminded the Ancient Greeks of the Egyptian ram-horned god, Ammon.

Despite this common occurrence, only the rarest of these fossils exhibit the preserved shell required to make ammolite gemstones. As Maull explains: “Ammonite fossils are found all over the world. It was a very prolific creature that lived for around 300 million years across the globe. In every other place where they are found the shell has been destroyed by time and not preserved. Or, if it has been preserved, it is a reddish-brown and not suitable for making gemstones. The only place in the world that we have found the shell preserved is a small pocket in Alberta.”

What caused this unique preservation is not fully understood. Maull cites “many theories” including the presence of volcanic ash over the millennia. He adds: “We do find a lot of bentonite [absorbent aluminium phyllosilicate clay usually the presence of water] in the sediment, so there was a lot of volcanic activity in the area as it was forming and that may have preserved the shell. It really is an ongoing mystery.” 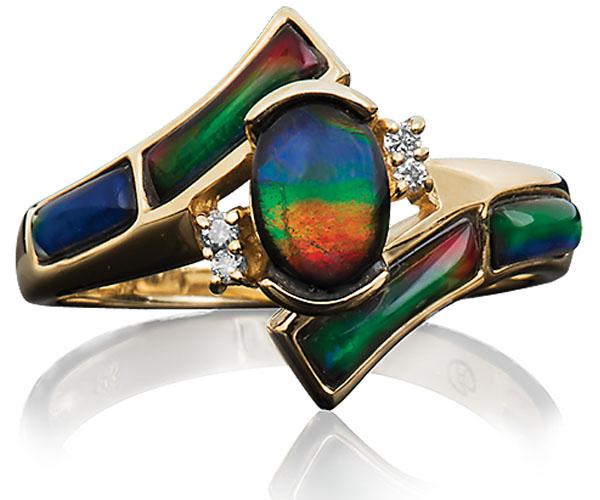 Inlay ring made from ammolite.

Despite this, there is still plenty we do know about ammolite. Korite deals in four grades of jewellery-appropriate ammolite gemstones: AAA, AA, A and standard. The AAA grading refers to the broadest range of colour, vibrancy and quality, with rarer stones blending blue, indigo and violet shades with the more common red and green hues. For comparison purposes, AAA is deemed similar in quality and rarity to D-flawless diamonds.

As the ammonite shells are in a delicate, preserved state, getting them out the ground is no easy task. “It is the same as any other strip mining operation, until we get down to the pay zone,” Maull explains. “We have to move the sediment very carefully because ammonites are fragile. When we do find one, all the heavy equipment stops and it becomes a hand process. There is a palaeontological aspect to it, and we have to teach our miners how to remove it without damaging it — this is a process we have perfected.”

With such vibrant colours, it is understandable that finished ammolite jewellery and ammonite fossil specimens are growing in popularity, especially in the Asian market. Feng Shui experts believe that ammolite has absorbed a substantial amount of the earth’s positive energies, also known as qi (ch-ee). One form of this is light energy, which is evident in the multitude of colours in ammolite.

According to Feng Shui, our brain interprets light energy as colour, so these colours and their specific wavelengths can be used to balance our lives. Ammolite is recognised as the ‘Seven Colour Prosperity Stone’ due to its seven distinct colours; red is said to nourish love, orange promotes creativity, yellow improves wealth, green improves wisdom, blue aids health, indigo encourages peace, and violet stimulates growth and energy.

For Feng Shui masters, ammonite fossils are also special for their spiral shape, mimicking the path the universe’s forces follow in space and nature. When shape and colour combine in phenomenal ammonite fossils, these natural treasures are coveted as luxury home décor objects. 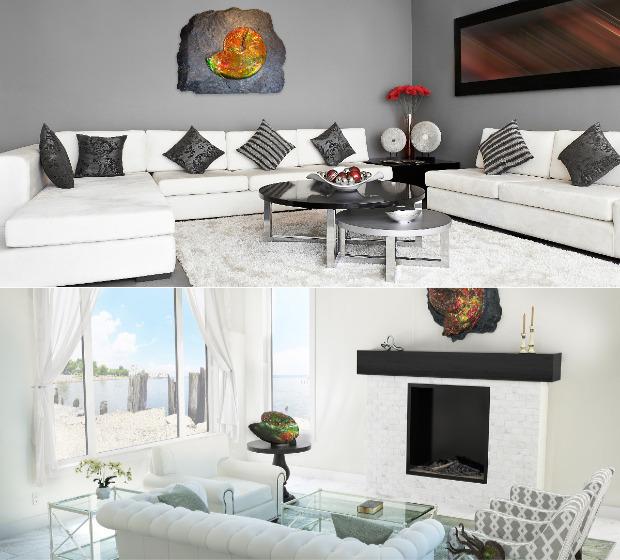 Maull comments: “We have been doing business with a Feng Shui master in Hong Kong for 16 years, and there is no doubt that [Feng Shui and Korite’s expansion] are linked. This is also how our growth in China came about. We just struck a deal with a large jewellery company in mainland China and their demand means we have to expand the mine to accommodate.”

The Future of Ammolite

Ammolite may be a ‘fringe’ gemstone right now, but, according to Korite, its value has increased by 300% over the past decade alone. Consumer awareness and education, especially in western markets, will be crucial in developing the reputation of ammolite in the coming years.

Retailers will also need the right knowledge to help their customers make informed decisions. For example, like pearls, ammolite reacts to acids, hairsprays and perfumes and should be stored separately from other jewellery to prevent scratching. Similar caution should be taken with ultrasonic cleaners and immersion in water.

“There are several things we market about ammolite,” Maull explains, “it’s rare, it’s precious and it’s exotic. It is the rarest gemstone in the world and everywhere we go [people say] they have never seen anything like it.” He continues: “It is very exciting, every day that we find ammolite it is like a new day, everyone loves finding it and we love working with it and taking it all over the world and showing it to people. It is very rewarding.” 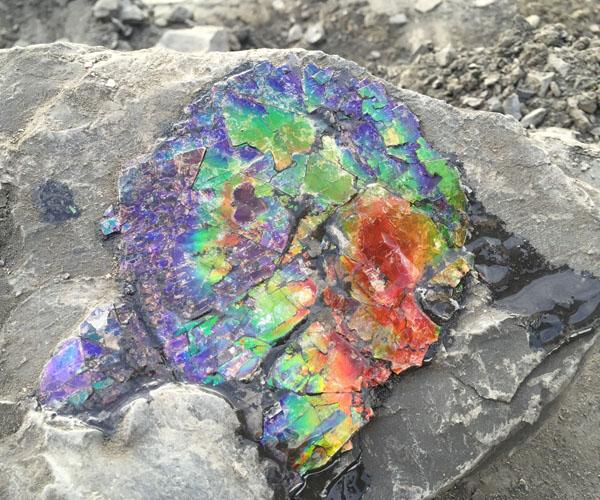 Korite places great emphasis on environmental and ethical concerns. For example, layers of soil are replaced in the order they were removed and native grasses are replanted. “The mainstay of our business is to respect the land and return it to its normal state, if we look after the land it looks after us. It has become the core of our company to extract the ammolite and leave the land as we found it. We are very proud of this, we have won environmental awards from the government of Canada, and our stewardship of the land is one of our highest priorities,” Maull notes.

Since 1983, Korite has established itself as the market leading name in ammolite. Its determination to put the gemstone, and Alberta, on the gemmological map is clearly just one facet of its global ambition. With finished jewellery and stand-out specimens supported by an enviable lore, it is clear that ammolite has branded potential. This is certainly good news for Korite, especially as it expects to be mining for another 50 years. ■

Tagged under
More in this category: « Interview: Steve Moriarty of Moriarty's Gem Arts on a Lifetime in Gemstones Reviving the Pearling Industry in the UAE »
Tweet
Become a Gem-A Member
Apply to become a Gem-A Member
Subscribe to our Newsletter
Keep updated with Gem-A
Sign Up
Get in Touch
Can't find what you're looking for?
Contact Us