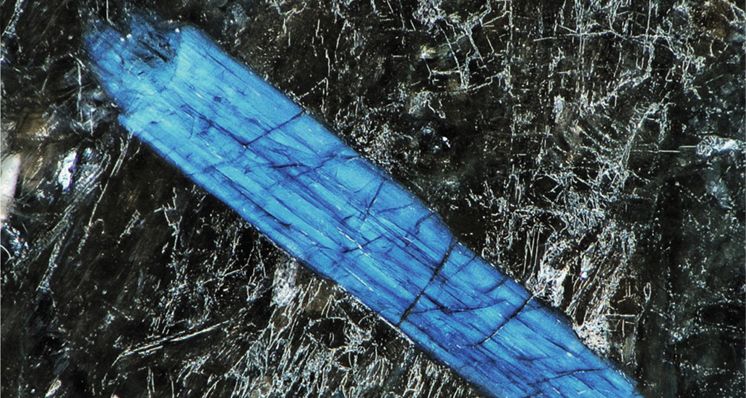 This article by Guy Lalous ACAM EG summarises a technical article from The Journal of Gemmology discussing the origin of colour and conditions of formation in violet-to-blue Nuummite from Simiuttat, Greenland.

Nuummite is an iridescent orthoamphbiole rock found in the Nuuk Distruct in south-west Greenland. It has only been known in the trade since 1983. However, the rock is believed to have been formed in the Late Archean period more than three billion years ago.

A study published in The Journal investigates the mechanism for the violet-to-blue diffraction colouration of the Simiuttat Nuummite, providing a petrological description of the rock and highlighting the metamorphic pressure-temperature (PT) conditions of its formation. The study concludes that the colour of Nuummite is not due to grain chemical variation, but to the spacing of exsolution lamellae in orthoamphibole.

Some gemstones are formed by microscopic layers of material that are stacked upon one another. When light interacts with the different stacks within the gem material it causes flashes of colour. This is called iridescence, which refers to the scattering and diffraction of light, the iridescent effect is seen in a few gemstones including labradorite, moonstone and Nuummite.

What is the difference between iridescence and diffraction?

Iridescence happens when light passes through a thin, transparent film with a different refractive index from the surrounding material. Thin-film interference of visible light occurs when light interacts with a lamellar material consisting of fine layers that have different refractive indices (RIs). In diffraction, light waves pass through a grating. Diffraction is caused by the bending, spreading and subsequent overlapping of a wave-front when passing through a tiny opening or openings in an otherwise opaque obstacle. Iridescence is frequently used to describe any diffraction and/or thin-film interference-related colour phenomena, as interference and diffraction in minerals are closely related and often occur together.

The RIs measured on a polished slice of Nuummite were 1.650–1.660, with a second shadow edge at approximately 1.54. Hydrostatic specific gravity (SG) measurements were 3.09 ± 0.01. The presence of amphibole-, biotite- and cordierite-rich areas explains the different refractometer readings, with values of about 1.66 being typical for orthoamphibole while the additional shadow edge of 1.54 originated from cordierite.

Observation of the polished slice with a digital microscope showed laths of orthoamphiboles criss-crossing one another. The crystals displayed blue-to-violet flashes, which were only visible on {210} cleavages. The colours vanished when the crystal was tilted to an angle of 5–15° depending on the tilting axis, indicating a strong geometric control on the colouring phenomenon. The surface topography of the {210} cleavages might act as a diffraction grating that could contribute to the iridescence.

What is a granofels?

A granofels is a metamorphic rock with prevailing granular-textured minerals lacking any alignment. The anhydrous mineral assemblages found in granofels are produced at the base of the crust, where the conditions lead to their formation.

Phase diagram calculations show the stability field for the mineral assemblage at temperatures of 505-660°C and pressures below 6.4 kbar. The electron microprobe analysis (EMPA) data of the orthoamphibole crystals from the Nuummite samples plot at 590–600°C (±25°C) in the T–AlIV solvus diagram of Spear, constraining the minimum metamorphic temperature experienced by the rock.

What is electron microprobe analysis (EMPA)?

Electron microprobe analysis is an analytical technique that is used to establish the composition of small areas of a specimen. The method is non-destructive and utilises X-rays excited by an electron beam, incident on a flat surface of the sample.

What do we know about the solvus diagram of spear?

Solvus thermometry involves phases that form a solid solution at high-T but that 'unmix' into separate phases during cooling. The composition of coexisting minerals with a solvus relationship is an indicator of temperature. Data on mineral assemblages can be obtained through EMPA. The existence of a solvus in the orthoamphiboles between low-Al anthophyllite and high-Al gedrite has been noted by several scientists decades ago. Frank S. Spear (1980) conducted research on orthoamphiboles. His conclusion was that careful declination of the solvus T-X space enables to estimate temperatures in samples where two orthoamphiboles coexist.

Transmission electron microscopy (TEM) images showed a continuous succession of alternating exsolution lamellae of anthophyllite (wide, dark grey bands) and gedrite (narrow, light grey lamellae), which also were revealed by analytical electron microscopy (AEM) chemical analyses. The exsolution lamellae may have formed during cooling after peak metamorphism, during reheating processes in the course of the intrusion of a granite complex or during later metamorphic overprint.

What is transmission electron microscopy (TEM)?

What is analytical electron microscopy (AEM)?

AEM refers to the collection of spectroscopic data in TEM based on various signals generated following the inelastic interaction of the incident electron beam with the sample. These signals can be used to identify and quantify the concentration of the elements present in the analysed area, map their distribution in the sample with high spatial resolution (down to 1 nm or better), and even determine their chemical state.

The iridescence of Nuummite is due to the interference of light reflected from sub-microscopic, alternating gedrite and anthophyllite exsolution lamellae. Average spacing of 124-133 nm between the lamellae will generate violet-to-blue diffraction colouration, a previous study indicated an average spacing of 180 nm gives rise to yellow iridescence.

We sincerely thank Rex Guo for donating material for this research. We owe great thanks to Dr Nynke Keulen, Karsten Secher and Peter Appel of the Geological Survey of Denmark and Greenland (Copenhagen, Denmark) for providing information on the occurrence of Nuummite in Greenland. Thanks also to Willi Tschudin (Universität Basel) for preparing the thin section and polishing the slice of Nuummite. Finally, thanks to Anja Schreiber (GFZ Potsdam) for the careful preparation of the TEM slices. The manuscript was considerably improved by the suggestions of three anonymous reviewers. ■

This is a summary of an article that originally appeared in The Journal of Gemmology titled ‘Violet-to-Blue ‘Nuummite’ from Simiuttat, Greenland: Origin of Colour Appearance and Conditions of Formation’ by Leander Franz, Tay Thye Sun, Richard Wirth, Christian de Capitani and Loke Hui Ying  2016/Volume 35/ No. 4 pp. 330-339

Tagged under
More in this category: « Journal Digest: Delve into the Colours of Rainbow Lattice Sunstone What is the Indian Style in Art Deco Jewellery? »
Tweet
Become a Gem-A Member
Apply to become a Gem-A Member
Subscribe to our Newsletter
Keep updated with Gem-A
Sign Up
Get in Touch
Can't find what you're looking for?
Contact Us