Guy Lalous ends the year with his final Journal Digest of 2017 by exploring the chemical and mineralogical characterization of garnets found at the Arikamedu archaeological site in South India and their linkage to the rough material sourced from the Garibpet Deposit, roughly located 640 km away in Telangana State, east of the city of Hyderabad, India.

What about silicates and nesosilicates?

The vast majority of the minerals that make up the rocks of Earth's crust are silicate minerals. These include minerals such as quartz, feldspar, mica, amphibole, pyroxene, olivine, and garnets. The building block of all of these minerals is the silica tetrahedron, a combination of four oxygen atoms and one silicon atom. Garnets are nesosilicates. This subclass includes all silicates where the (SiO4) tetrahedrons are unbounded to other tetrahedrons.

Garnets are a set of closely related minerals that form a group, resulting in gemstones in almost every colour. All garnets have essentially the same crystal structure, but they vary in chemical composition and properties. Many garnets are chemical mixtures of two or more garnet species, they are found throughout the world in metamorphic, igneous and sedimentary rocks. They have been grouped according to their composition in two groups. The ones that contain A1 in the B position in the formula are widely called pyralspites and the ones with Ca in the A position are ugrandites. These names are derived from the first letters of the single minerals in these groups; pyrope, almandine and spessartine make up the pyralspite and uvarovite, grossular and andradite are the members of the ugrandite group.

Garnets are isotropic and figuring out how each one of them fits into the six main mineral species and their mixtures can be a serious challenge. The gemmologist will need an accurate refractive index, specific gravity and UV-VIS spectrum to come to the right conclusion. 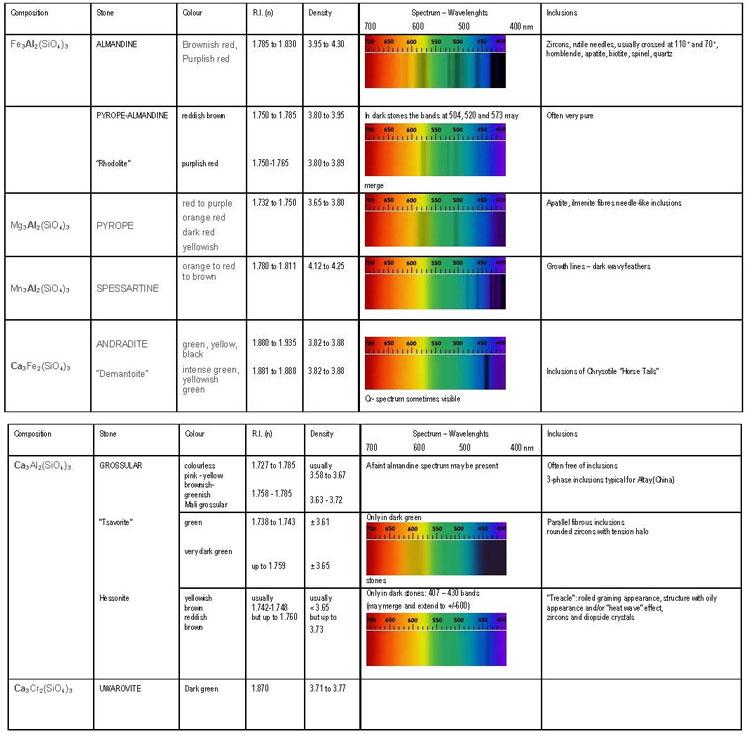 Table of identification of the main garnet species.

Arikamedu has initially been portrayed as a Roman settlement. Modern theories describe Arikamedu as an important Indian trading centre and harbour, connecting the east coast of India with the western world from the 1st century BC to the 7th century AD. Arikamedu served as one of the main bead-producing localities in India. The unearthing of several thousand stone and glass beads during the archaeological excavations attests to this fact. The glass is rich in potassium oxide K2O (Harder 1993). Some of the beads collected are cobalt glass with following gemmological properties: R.I.=1.52 spot, gas bubbles, swirl marks and chalky fluorescence (Jayshree Panjikar, Pangem Testing Laboratory, Pune, India). Garnets were the second-most prevalent among the stone beads after the quartz variety. Bead production remained on-going in the region for centuries and was only abandoned in the early 17th century.

The current study presents for the first time a thorough chemical and mineralogical characterization of garnets found at the Arikamedu archaeological site in southern India, using high-quality major- and trace-element data in conjunction with detailed inclusion studies. The authors then demonstrate a remarkable correlation with recently mined garnets from Garibpet in Telangana State, India - approximately 640km away of 760km distant by road - as the source of origin.

The Kothagudem-Garibpet area is located in the Vinjamuru domain of the Khammam schist belt and consists of Paleoproterozoic moderate-grade (and partly migmatitized) metasediments and metavolcanics with minor mafic and granitic intrusives. The conspicuous Garibpet Hill is formed of garnet-kyanite-muscovite schist and is surrounded by biotite schist and gneiss. 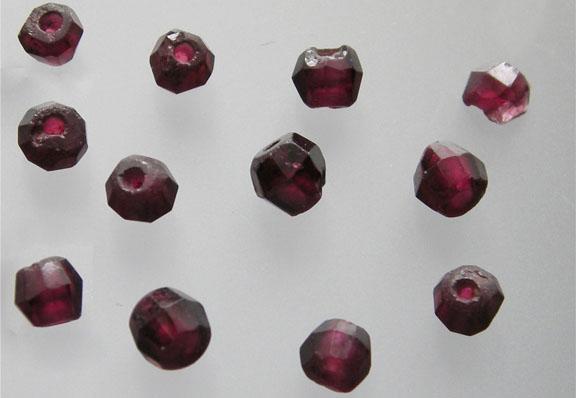 These faceted garnet beads were collected by local farmers from the Arikamedu site. The samples constitute some of those studied for this report and measure ~4.55-5.5 mm in diameter. Photo by K. Schmetzer.

What about Electron Microprobe Analysis?

During electron microprobe analysis, a sample is bombarded with a beam of electrons. The interaction of the electron beam with the sample material results in formation of X-rays, which can be analysed by the microprobe. The wavelengths and energies of these X-rays provide information about the chemical elements present in the sample (qualitative analysis). When compared with reference materials, the measured x-ray intensities can be used to determine element concentrations (quantitative analysis).

What about a Ternary Diagram?

A ternary diagram is a triangle, with each of the three axes representing a composition, such as the one in this study: pyrope, almandine and spessartine + grossular. The proportions of the three compositions sum to 100%. The plot graphically depicts the ratios of the three variables in as positions in an equilateral triangle. It is used in physical chemistry, petrology, mineral and other physical sciences to show the compositions of systems composed of three species.

The great majority of analysed samples from Arikamedu (beads and fragments) and the rough stones from Garibpet proved to be garnets with a high almadine content. The compositional fields were in close proximity and overlapped to a large extent. Microprobe data revealed almandine in the range of 77-84 mol% with minor components of pyrope, spessartine and grossular. A ternary plot of the molecular percentages of the garnet end members pyrope and almandine and the sum of spessartine + grossular showed that the studied garnets plotted within a relatively small compositional range. This outcome was even clearer when only a small portion of the full ternary diagram was drawn with an extended scale.

(a). This ternary diagram shows the chemical composition of garnets from Arikamedy and Garibpet calculated for the molecular end-members pyrope, almandine and spessartine + gossular. The compositions plot in a concentrated area, except for two anomalous Arikamedu samples (blue and purple arrows) that fall outside the main compositional field, which are inferred to be from different sources. (b). An enlarged detail of the main compositional field for the Arikamedu and Garibpet garnets corresponds to the area defined by the grey triangle in the inset. Note the extensive overlap in the composition of garnets from Arikamedu and Garibpet.

The compositional ranges for the two localities were:

How does LA-ICP-MS work?

The LA-ICP-MS analysis process can be thought of in two main parts: material sampling i.e. Laser Ablation (LA) and chemical analysis i.e. Inductively Coupled Plasma Mass Spectrometry (ICP-MS). A tiny, nearly invisible ablation put is caused by the laser, into the girdle of the gemstone. There will be minimal damage as the laser vaporises only a microscopic amount of the sample for analysis. It nebulizes the material and the aerosol produced is transferred in a gas stream to an ICP-MS for elemental and/or isotopic analysis. An ICP-MS combines a high-temperature Inductively Coupled Plasma (ICP) with a Mass Spectrometer (MS). The ICP is an ionisation source where the energy is supplied by electric currents, which ionises the atoms. These ions are then separated based on their mass-to-charge ration (m/Q) and detected by the MS.

What is LA-ICP-MS used for?

LA-ICP-MS is recognised as one of the most important spectrometric techniques and has been used in gemmology for quantitative chemical analysis. It provides data that can be used to create chemical fingerprint diagrams for geographical origin determination.

The compositional averages and the ranges demonstrated by LA-ICP-MS analyses were nearly identical for the Arikamedu and Garibpet garnets. A similar relationship was noted for lanthanide rare-earth elements. Several samples from Arikamedu and Garibpet also showed chemical zoning for some trace elements, such as Y, P and Zn. Considering in detail both trace and other elements, chemical zoning between core and rim was strong for Mn and significant for Ca, largely consistent with the results of microprobe analyses.

How can we classify solid inclusions?

Solid inclusions are divided into three categories, by time of entrapment: those formed before the host crystal, called protogenetic; solids which arise from the solution from which both they and the host originated, called syngenetic and those formed after the host crystal has finished its growth, epigenetic.

The proto - to syngenetic inclusions in the cores comprised, with decreasing abundance: apatite, quartz, ilmenite, rutile, monazite, zircon, graphite and fluid inclusions. At the core-rim boundary, a very characteristic layer of fibrous sillimanite bundles was observed. Isolated zircon, monazite and quartz crystals were also found occasionally in the rims. The garnets were often cut by brownish-yellowish fractures coated by various generations of goethite or other iron oxides-hydroxides. 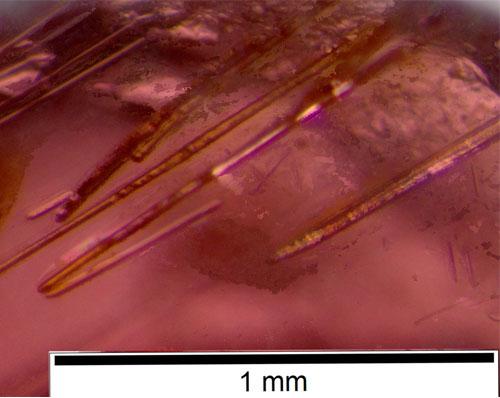 Coarse acicular sillimanite needles were observed in a small number of the garnets from Arikamedu. Photomicrograph by H.A.Gilg.

The small differences observed in the average chemical compositions between the Arikamedu and Garibpet material can probably be explained by the fact that the Garibpet samples were collected from one secondary source within a large garnet-bearing area and, therefore, are not entirely representative of the Garibpet rough material used for bead production at Arikamedu.

This is a summary of an article that originally appeared in The Journal of Gemmology entitled 'The Linkage Between Garnets Found in India at the Arikamedu Archaeological Site and Their Source at the Garibpet Deposit’ by Karl Schmetzer, H. Albert Gilg, Ulrich Schüssler, Jayshree Panjikar, Thomas Calligaro and Patrick Périn 2017/Volume 35/ No. 7 pp. 598-627

Cover image: Faceted garnet bicones from Arikamedu were cut in half and polished for microprobe analysis. Two drill holes meet approximately in the centre of each sample. Photo by H.A.Gilg.

Tagged under
More in this category: « Zircon from Vietnam: Properties and Heat Treatments Greenland Ruby: The Mighty Aappaluttoq Arises »
Tweet
Become a Gem-A Member
Apply to become a Gem-A Member
Subscribe to our Newsletter
Keep updated with Gem-A
Sign Up
Get in Touch
Can't find what you're looking for?
Contact Us