Native to Montana, the sought-after Yogo sapphire was first discovered accidentally by a gold miner in the 1890s. Elizabeth A. Gass FGA, a Gemstone Advancement and Education Coordinator at JTV, guides us through the gemmology and origins of the Yogo sapphire and explains what makes this dazzling American gem so special.

Montana has so much mineral wealth that one of its nicknames is ‘The Treasure State’. Gold is what first drew settlers to its vast landscape but, in the gemmological community, Montana is most well-known for one of its more colourful treasures: sapphire. There are a few mines that have produced sapphires over the years, but the most desirable material is from Yogo Gulch.

The story of the discovery of Yogo sapphires is much like the discovery of many American sources of gemstones; no one was really looking for them. In 1895, a miner by the name of Jake Hoover discovered gold along a bench (flat area on the side of a mountain) east of Yogo Creek. Thinking that there was the possibility that the deposit could yield significant amounts of gold, he searched for investors.

They raised somewhere around $40,000 to invest in the mining operation, $38,000 of which was used to construct a ditch and flume to bring water to the mine. It extended for several miles and evidence of it can be found today. Luck was not on their side and after a year of mining they came away with only 40 ounces of gold, worth around $700. Miners had been noticing ‘blue pebbles’ in their sluice boxes since mining took off in the area but everyone just discarded them in their search for gold. 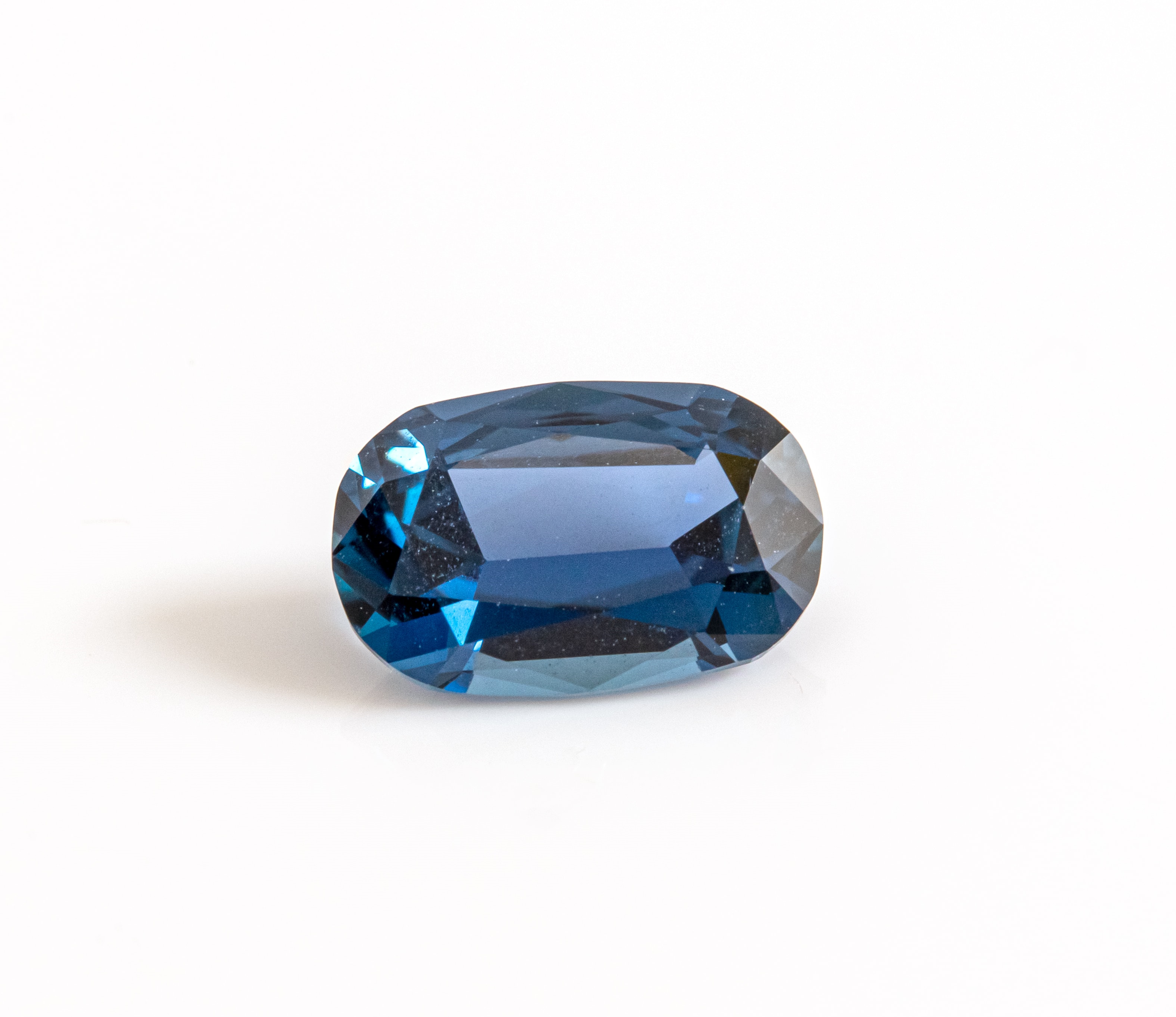 A cut and polished Montana sapphire.

Hoover was different, he collected the small blue stones in a cigar box until it was full. He then sent them off to Tiffany & Co. to see what they were and if they were worth anything. Hoover received quite the surprise when George F. Kunz of Tiffany & Co. identified the pebbles as sapphire. Tiffany & Co. bought the cigar box full of rough for $3,750 and Kunz declared the stones “the finest precious gemstones ever found in the United States” due to their exceptional colour and clarity.

Learn more: Sapphire for Those Born in September

Realising that the sapphires could be the remedy to their financial problems, Hoover and his partners set out to find the “mother lode”. Another prospector stumbled upon the source of the sapphires when he found a fissure filled with soft material in a limestone outcrop. When he washed some of the material, he immediately found sapphires. Hoover and company quickly identified the vein as the source of the sapphires. It did not take long for claims to be staked along the five-mile length of the vein. Eventually, 33 claims, all mining sapphire, were established.

Origins of the Yogo Sapphires

The famous Yogo sapphires would never have existed without the geological processes that occurred in the Yogo mining area. They are found in a system of igneous intrusions called dikes. There are six main dikes that form the centre of the Yogo sapphire deposit. All are composed of a type of igneous rock called a lamprophyre. A lamprophyre is a dark igneous rock with porphyritic texture, meaning that there are larger crystals in a fine-grained matrix.

These dikes intruded into the predominantly limestone country rock. The limestone had previously undergone dissolution processes that created karst topography in the form of channels, caves, and sinkholes. The lamprophyre dikes followed the natural topography during emplacement. The main dike, which is where the bulk of the mining for Yogo sapphires has taken place, is un-weathered compared to the other dikes. The weathered dikes are altered to clay minerals, often yellow to reddish brown in colour. 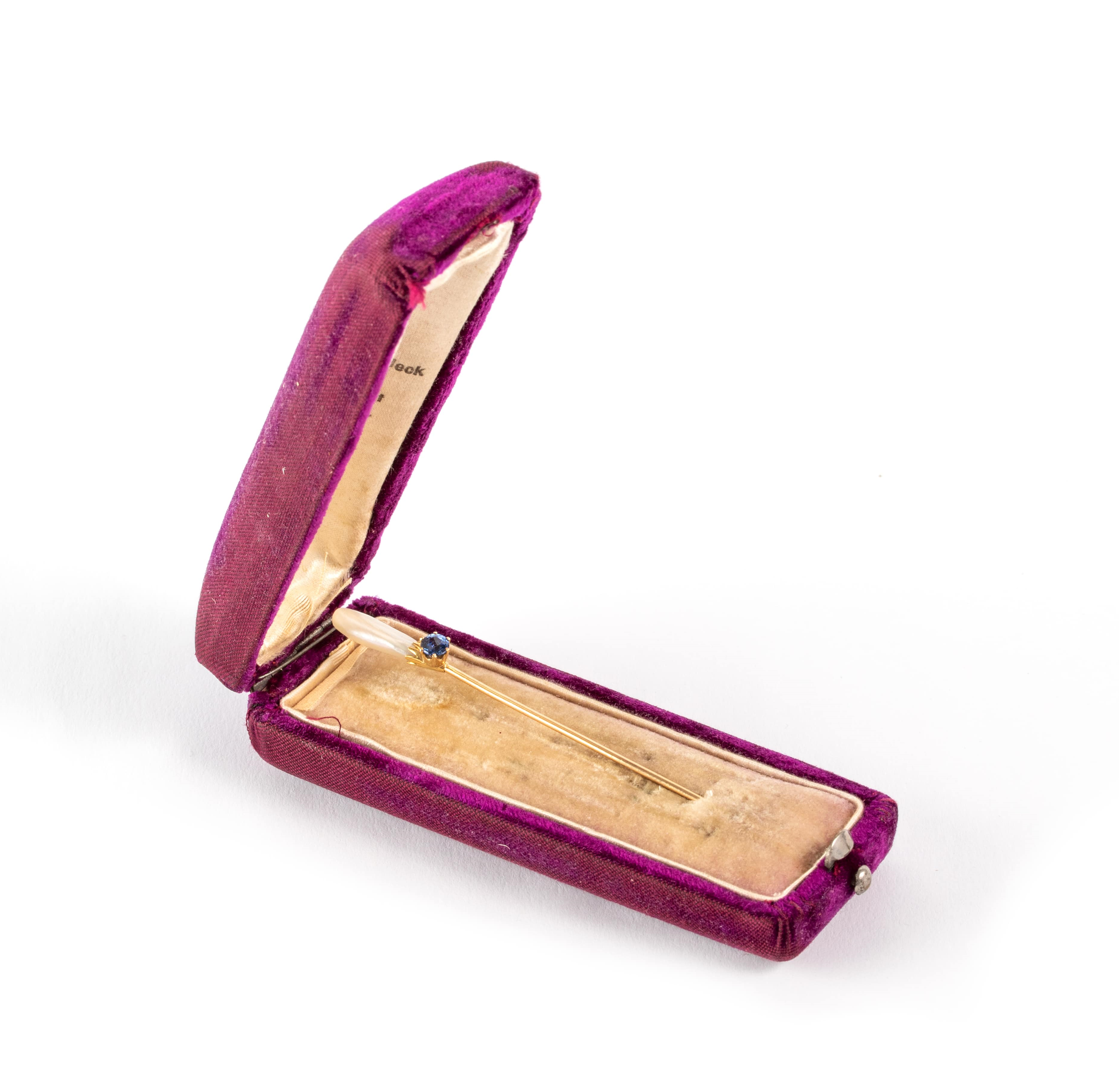 A tie or lapel pin set with a Montana sapphire.

One dike that was discovered does not bear sapphire. It is a mafic lamprophyre whereas the others that do bear sapphire are all ultramafic. This means that the sapphire bearing rocks are made of less than 45% silica. Because the other dikes are altered, the main dike is the most appropriate dike to study and infer the emplacement conditions of the Yogo sapphire deposits. It is also the only dike to have significant research available.

The main dike has a limited amount of contact metamorphism with the surrounding rock which indicates a quick emplacement and cooling process. The magma that made the lamprophyres is thought to have originated in the upper mantle. The magma moved through existing metamorphic rocks, rich in aluminum, partially melting and heating them. The sapphires formed as a reaction between the magma and the aluminum-rich rock in what is called a peritectic reaction.

Peritectic reactions occur between a solid (country rock) and a liquid (lamprophyre) at certain temperatures and compositions resulting in a new solid (sapphire and other minerals). The sapphires did not crystallise from the lamprophyre, but the intrusion caused their formation. Pieces of the country rock that now contained sapphire were incorporated into the magma as xenoliths. The magma melted many of these xenoliths and incorporated the elements into itself. Even the sapphires were partially absorbed with some showing a spinel reaction rim or etching and pitting. There are a few theories of how the sapphires came to be in these igneous bodies, but this is one of the more recent that correlates well with the known data.

Visual Properties of the Yogo Sapphire

The unique geology of the Yogo mining area leaves an imprint, not just on the geologists and miners that know the area, but also on the sapphires themselves. They are known for their even colour, lack of colour zoning, and are fairly-free of inclusions. Their quality as cut stones is also increased due to their high lustre and brilliance. They are typically a ‘cornflower blue’ colour but can also be found in shades of violet or purple. Typically, it is difficult to distinguish sapphires from different deposits because of how physically similar they are.

Yogo sapphires, on the other hand, are wholly unique. Their origin can be considered igneous, instead of metamorphic, like most sapphires. They have unique inclusions and distinct trace element concentrations that make them readily distinguishable from sapphires mined in other locations.

Some of the more notable and recognizable inclusions include negative crystals of carbonates or analcime, pyrope-almandine-grossular garnet crystals, elongated dark rutile crystals with or without tension fractures and melt inclusions with contraction halos. There is also a notable lack of silk in Yogo sapphires. If it is present, which is extremely rare, it is a minute amount which is called ‘rutile dust’. The trace element concentrations distinguish them by their generally elevated magnesium and titanium content. Some Sri Lankan sapphires can overlap the lower end of the Yogo sapphire range, but they always have a much higher iron concentration than Sri Lankan material.

The United States may have vast wilderness and incredible natural wonders, but it is some of our smallest treasures that have captured mankind’s attention. Sapphires from the Yogo Gulch of Montana are no different. This unique formation environment provided a distinct chemistry and readily identifiable inclusions. The Yogo sapphire’s accidental discovery and all the subsequent successes and failures of different mining ventures gives this precious stone an incredible story.

Tagged under
More in this category: « The Unusual History of Caesar's Ruby American Gemstones: Sweet Home Mine Rhodochrosite from Colorado »
Tweet
Become a Gem-A Member
Apply to become a Gem-A Member
Subscribe to our Newsletter
Keep updated with Gem-A
Sign Up
Get in Touch
Can't find what you're looking for?
Contact Us