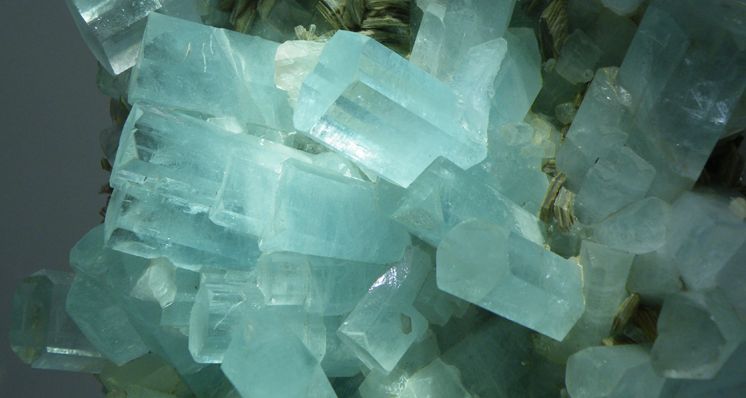 Those born in March are lucky enough to have two birthstones: the beautiful blue of aquamarine and the mysterious red-spotted bloodstone. Here, we delve into the history and mystical properties of aquamarine and why this sky blue gem is said to be a talisman of good luck, fearlessness and protection.

The blue hues common to this popular stone are fitting considering the Latin translation of aquamarine is 'water of the sea'. Legends describe it as the mermaid's stone, bringing luck to sailors and protecting them from the perils of ocean travel.

In crystal healing, aquamarine is thought to have soothing energy that quells phobias or irrational fears. It is also associated with the throat chakra and is said to help boost the confidence of public speakers.

From a gemmological perspective, aquamarine is a member of the beryl family of gemstones, which also includes emerald, heliodor, morganite and goshenite. Aquamarine is distinguished from these gemstones by its pale blue to bright blue colour, caused by iron in its chemical composition.

Aquamarine displays pleochroism, which means its presents multiple shades of colour at once. Untreated aquamarine can be pale blue, bright blue, green and colourless. It has a hardness of 7.5 on the Mohs scale.

Where is Aquamarine Found?

Aquamarine is mainly found in Africa and Brazil, however, the March birthstone can also be mined in Australia, China, Myanmar, Pakistan, Madagascar, Russia, USA and Sri Lanka. In the 1950s, a famous and historically-significant deposit of aquamarine was found in Minas Gerais, Brazil, and the gemstones recovered became known as Santa Maria Aquamarines. Many gemstones from this location are highly-prized for their unusually deep blue tone. Today, you may come across the term 'Santa Maria' used to describe a particularly lovely blue colour aquamarine.

Aquamarine's durability and plentiful supply makes it a popular choice among jewellery designers. It can also be fashioned into most cuts, making it a firm favourite with lapidaries.

Although many cut aquamarines are free of inclusions, two-phase inclusions (liquid and gas filled), spiky cavities, and tubes parallel to the length of the crystal that look like falling rain are common.

Perhaps the most famous aquamarine specimen is the 10,363 ct Dom Pedro, which weighs an astonishing 26 kg. To this day, it holds the title of being the largest piece of aquamarine ever to be cut. It was specialists in Idar-Oberstein, Germany, who took on the challenge in 1992.

Discovered by three Brazilian miners in Pedra Azul, Minas Gerais in Brazil in the late 1980s, the original aquamarine was a metre-long. Accidentally dropped, the specimen fractured into three separate pieces - the Dom Pedro being the largest.

In 1991, Jürgen Henn from Idar-Oberstein visited the owner of this large aquamarine crystal. In 1992 the stone went on the market and Jürgen asked his colleague Bernd Munsteiner to assess at the stone. Bernd sent his son, Tom Munsteiner and Jürgen’s son, Axel Henn, to strike a deal in Brazil and bring the stone to Germany.

For a year Bernd worked on the stone, studying the crystal, drawing facet patterns, cutting, faceting and polishing, before transforming the rough stone into an incredible obelisk.

The Dom Pedro first went on public display in 1993 in Basel, Switzerland. Some years later, it was destined to be cut into many smaller stones, but it was rescued by Jane Mitchell, who generously donated the Dom Pedro to the Smithsonian National Museum of History in Washington DC, USA.

Read more: An Interview with Dr Jeffrey Post of the Smithsonian Institution

This awe-inspiring gemstone is in the permanent collection of the museum, housed in the National Gem Collection Gallery. ■

Tagged under
More in this category: « Birthstone Guide: Amethyst for Those Born in February Why is Bloodstone the Alternative March Birthstone? »
Tweet
Become a Gem-A Member
Apply to become a Gem-A Member
Subscribe to our Newsletter
Keep updated with Gem-A
Sign Up
Get in Touch
Can't find what you're looking for?
Contact Us