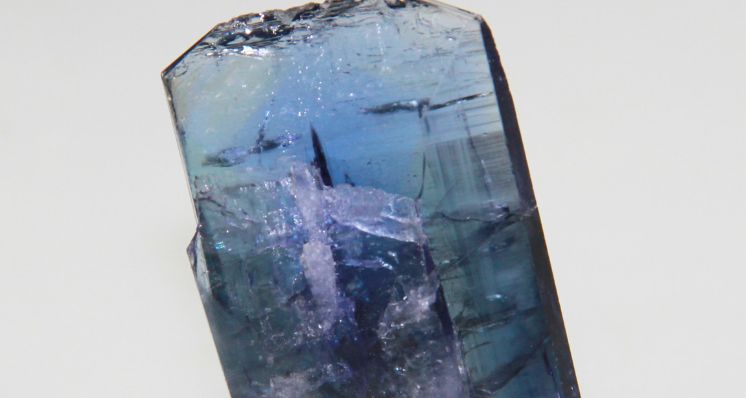 In the grand scheme of gemstones, tanzanite – a variety of zoisite – is a relative newcomer to the scene. It was first discovered in Tanzania in 1967 (hence its name) and was first brought to the Western fine jewellery market by Campbell Bridges.

Read more: Turquoise for those Born in December 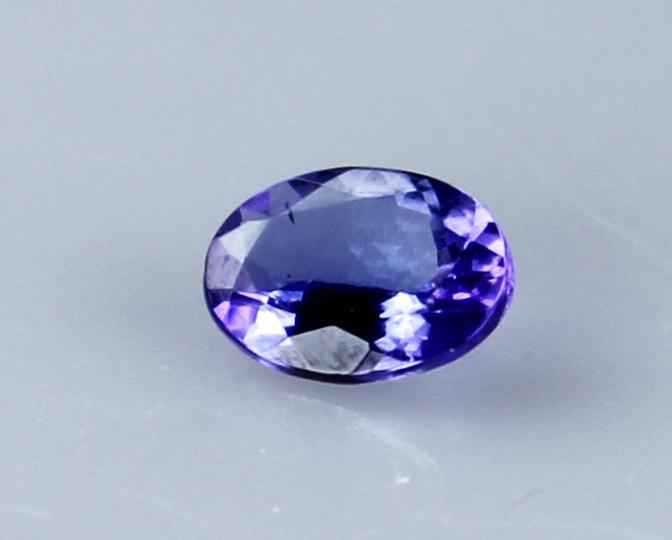 A faceted and polished tanzanite photographed by Henry Mesa.

Today, tanzanite is beloved for its rich purple-blue colouration. It has enjoyed steady popularity within the jewellery trade since Tiffany & Co. first started selling the gemstone in 1968.

In fact, one of the initial slogans related to the sale of tanzanite was “in Tanzania and Tiffany’s,” in reference to its singular origin (even today Tanzania is the only known source of tanzanite) and the speed at which Tiffany & Co. took the stone to market.

The Properties of Tanzanite

Tanzanite can be transparent to translucent with varying colour saturation. Tanzanite is often found as broken fragments, but when well-formed, the crystals are beautiful. They are prismatic with a rectangular cross-section and can have striations running parallel to the length of the crystal. 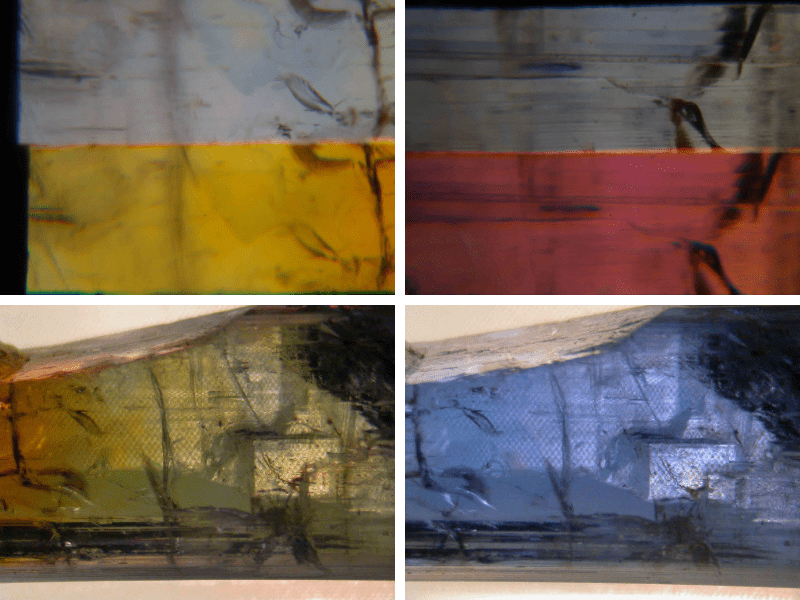 Top: the three distinct colours of the trichroic gemstone tanzanite (only two colours can be viewed in any one direction).
Bottom: Changing the orientation of polarised light by 90-degrees allows for different colours to be observed in tanzanite.

Often tanzanite is heat treated to enhance the desired purplish-blue colour. It is a strongly pleochroic gemstone that can look purple when viewed in one direction and blue when viewed in another.

Tanzanite displays trichroic pleochroism, meaning it can show three different colours depending on the angle at which it’s viewed: blue, yellow and pinkish purple. When heated, the yellow is eliminated, leaving you with a dichroic gemstone displaying blue and violet. These colours can be seen when using a dichroscope. High quality tanzanite is a saturated violet-blue, reminiscent of a fine sapphire, or a more unusual, predominantly violet colour.

Stones can appear bluer or more violet depending on the way in which the individual cutter has chosen to fashion the stone. Both these pleochroic colours are visible in a faceted stone when it is titled, which means every stone has its own ‘blend’. 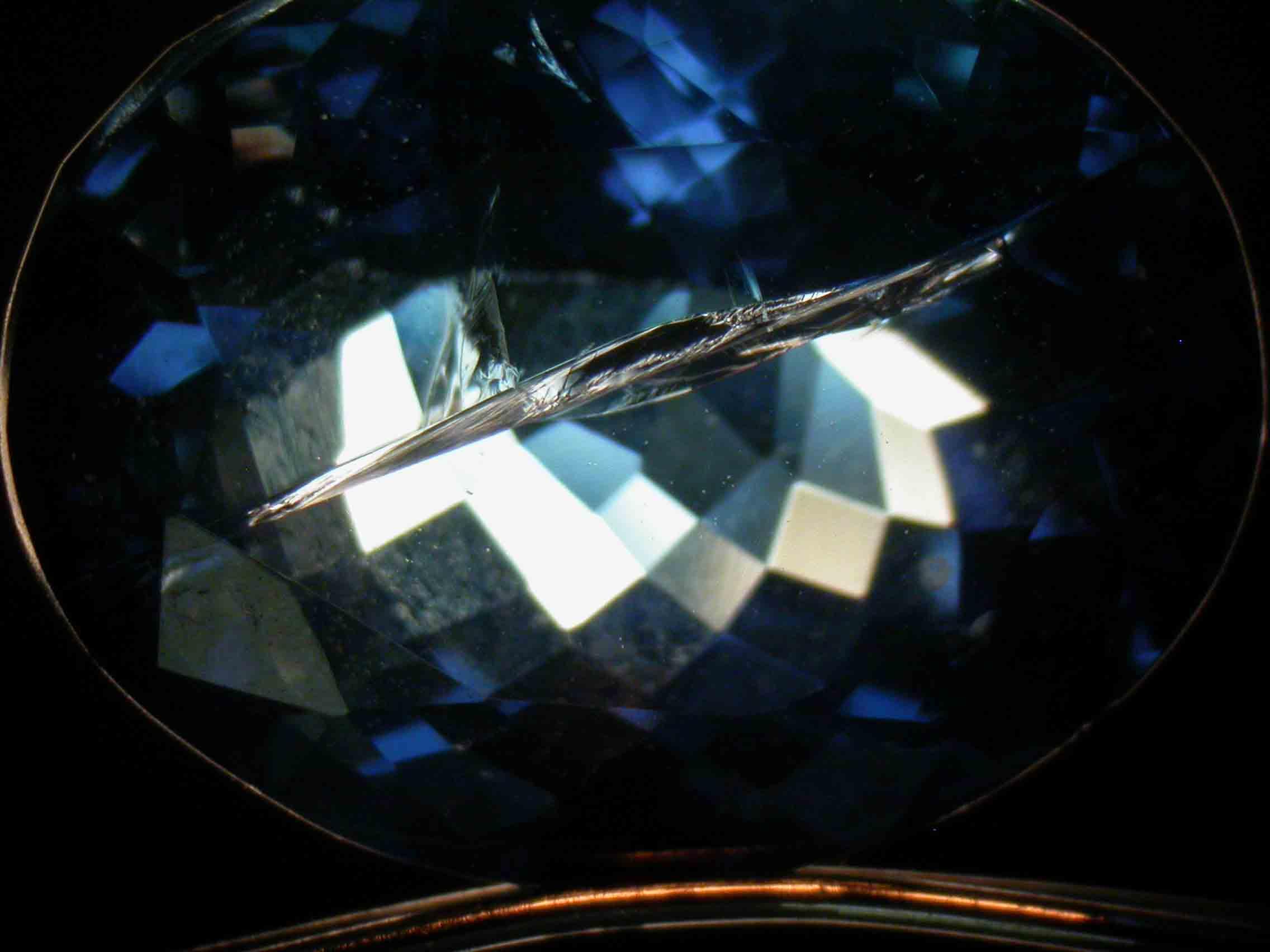 A fracture in tanzanite caused by an ultrasonic cleaner. Photographed by Pat Daly.

Tanzanite has a hardness of 6.5 on the Mohs scale, which is relatively not that hard. It is susceptible to scratches, abrasions and bruises. This gemstone is also, unfortunately, a material with low durability, making it brittle. It can chip and fracture easily, so great care it needed when wearing it.

Taking these factors into consideration, tanzanite is best worn in jewellery that is either for occasional wear or set into earrings and necklaces to protect it from the possibility of being knocked or damaged when set in a ring. Avoiding ultrasonic cleaners and excess heat is also advisable.

Cover image: A tanzanite crystal from the Gem-A Gemstone and Mineral Collection. Photographed by Henry Mesa.

More in this category: « Birthstone Guide: Turquoise For Those Born In December The Most Underappreciated Gemstone? Why We Love Rock Crystal »
Tweet
Become a Gem-A Member
Apply to become a Gem-A Member
Subscribe to our Newsletter
Keep updated with Gem-A
Sign Up
Get in Touch
Can't find what you're looking for?
Contact Us