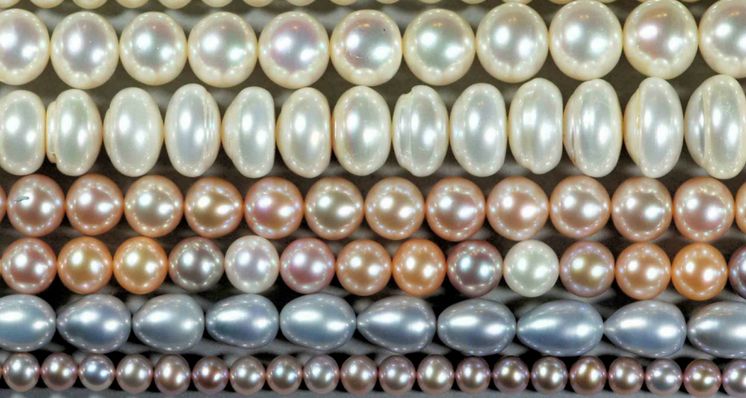 We believe everyone should own at least one piece of pearl jewellery… especially those born in June as pearls are their birthstone! Gem-A gemmology tutor Lily Faber FGA DGA EG considers the history and natural properties of these treasures from the sea.

When thinking about pearls, one conjures up images of perfectly round, white gems with a subtle iridescence. Pearls, in fact, come in many different colours, from white and pink to grey, blue and green. They also display varying colours of iridescence, like pink and green, and can form naturally or can be cultured.

Most pearls that are sold on the market today have been conjured into existence with the aid of human hands. These cultured pearls have dominated the pearl market since the early 20th century, ever since Kokichi Mikimoto began to successfully mass-produce, market and sell them at scale across the world.

The History of Pearls

For much of human history, natural pearls have been coveted and treasured. In 55 BC, Julius Caesar was said to have attempted an invasion of Britain to secure its copious supply of river pearls… he did not succeed! Pearls were seen not only as a symbol of wealth and exclusivity, but also of purity, integrity and wisdom. In ancient Japan, it was believed that pearls were formed from the tears of mythical creatures such as angels and mermaids. Often worn by 17th, 18th and 19th century European aristocracy both in daily life and in painted portraits, a strand of pearls represented unimaginable wealth.

Read more: Breaking Down the Misunderstandings about Precious Coral

Prior to a crash in pearl prices in 1930 and the predominance of cultured pearls, good quality natural pearls were highly valued and exceedingly rare. They were so sought after, in fact, that in 1917, a double strand of 128 natural, graduated pearls, was traded by the jewellery house Cartier for a large mansion on 5th Avenue in Manhattan, New York (still their flagship store in the US), owned by American industrialist Morton Plant.

The necklace, given to Plant’s wife Maisie, was worth just over £1 million at the time, but when it was sold 40 years later, it made a mere £100,000. To compare, the building today is worth millions of pounds.

Contrary to popular belief, pearls are not formed when a single grain of sand irritates an oyster’s flesh, as it would simply eject the sand. Instead, a parasite or tiny irritant that invades the mantle causes the oyster to cover it with successive layers of nacre, or mother-of-pearl, which is a combination of calcium carbonate in the form of aragonite platelets, and conchiolin. Saltwater oysters and freshwater mussels form these natural wonders with their pearly lustre. Conch and melo melo snails can also create a marine pearl but without the familiar iridescence. 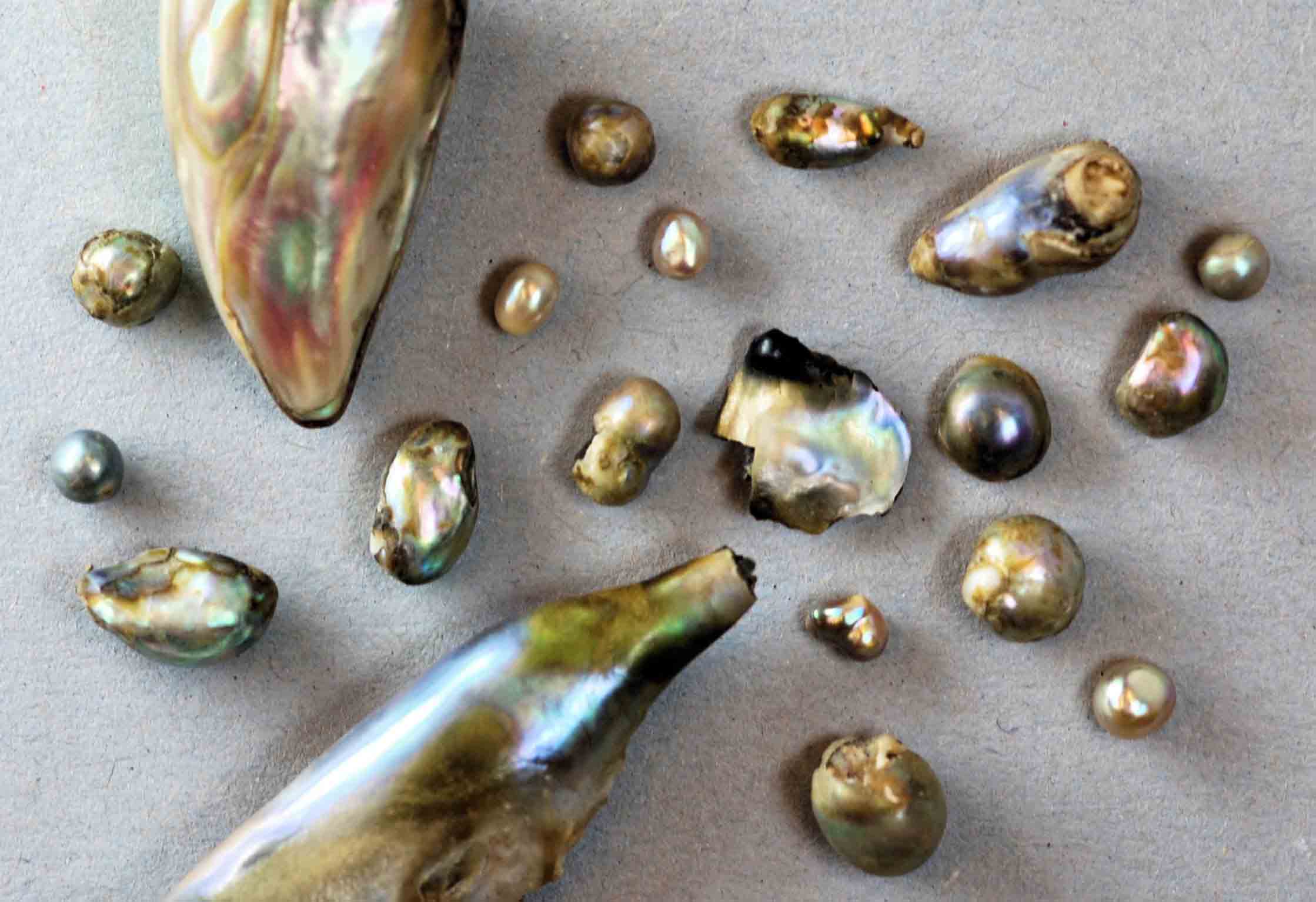 Abalone is a common name for a group of small to very large sea snails (marine gastropod molluscs) in the family Haliotidae. These abalone pearls were photographed by Pat Daly @ Gem-A.

Read more: Reviving the Pearling Industry in the UAE

Shine a strong light through the pearl, and you should see the bead in the centre, surrounded by concentric rings of nacre. You may also be able to see the delineation between the bead and the outer nacre layer if looking down the drill hole of a bead with a 10x loupe. It is considerably more difficult to recognise if a pearl is natural versus non-nucleated, and you will need to send it to a lab for further, advanced testing such as an X-ray.

Pearls can come in any shape or form. The most coveted shape is round; however, they can be off-round, oval, flattened, an indefinable shape known as baroque, or anything else you can imagine.

Pearls are an extremely soft gem material and are susceptible to damage. They have a hardness of 3.5 to 4 on the Mohs’ scale, which, compared with gemstones like sapphires, is very soft. Pearls also have a small percentage of water in their structure and they can crack or craze as a result of heating or dehydration. Pearls can chip and fracture in addition to being easily scratched by other jewellery and even each other, resulting in a powdery-looking surface. 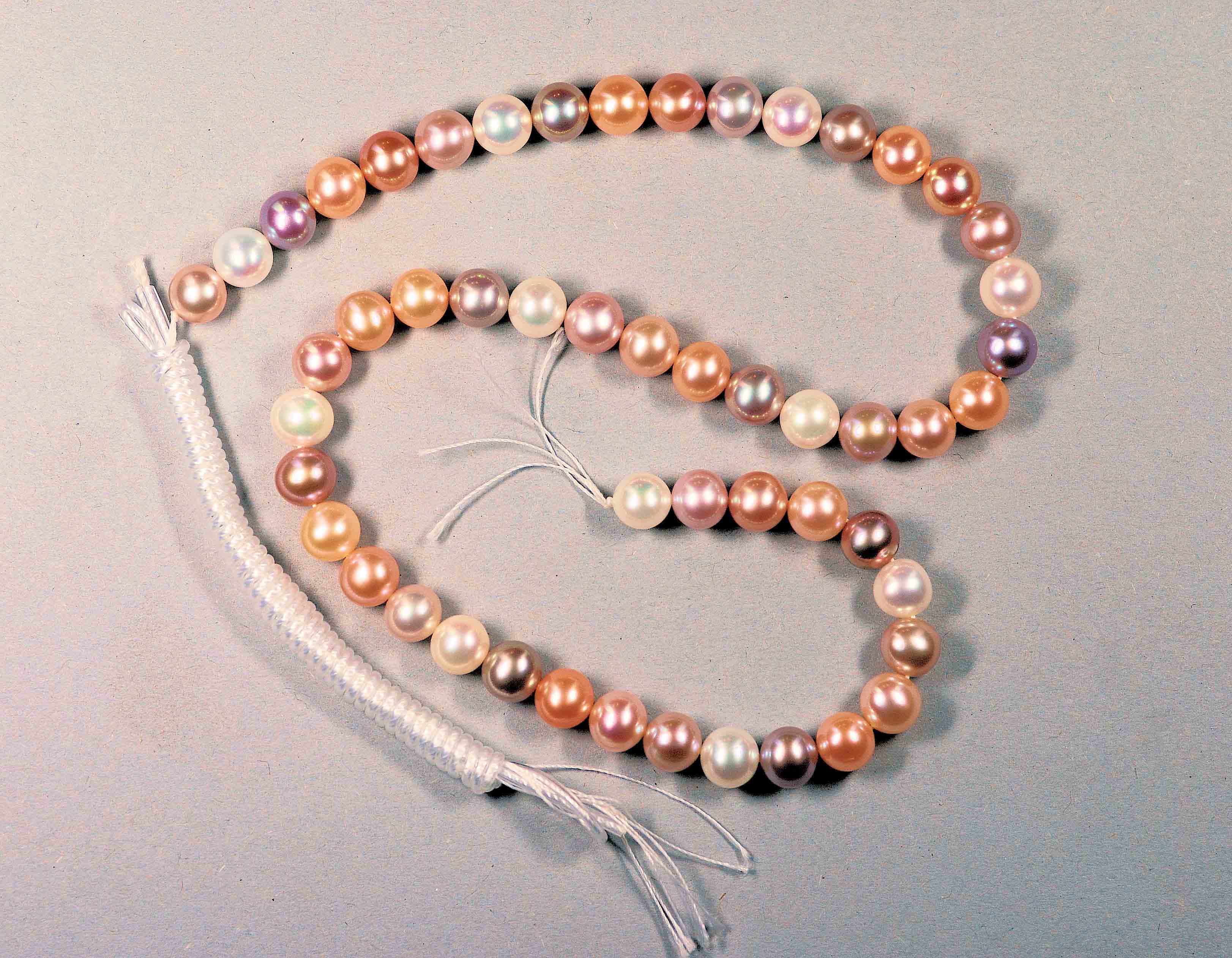 A strand of multi-coloured pearls. Photograph by Gem-A.

The calcium in their composition can easily be attacked and damaged when put into contact with chemicals of varying acidity from soaps, detergents, perfume and even your skin. The rule of thumb when wearing pearls is to keep them high in earrings or necklaces. They should be the last things you put on and the first things you remove at the end of the day.

While pearls are beautiful, they are not meant for daily wear, especially not in jewellery like an engagement ring due to their fragile nature. Wash only with warm water and dry with a soft cloth. Pearls can be a beautiful addition to your jewellery box, particularly if you were born in June. Ensure that you care for them properly and they will be a source of joy for years to come.

More in this category: « What Makes the Alexandrite Colour-Change Effect so Special? Birthstone Guide: Ruby for Those Born in July »
Tweet
Become a Gem-A Member
Apply to become a Gem-A Member
Subscribe to our Newsletter
Keep updated with Gem-A
Sign Up
Get in Touch
Can't find what you're looking for?
Contact Us