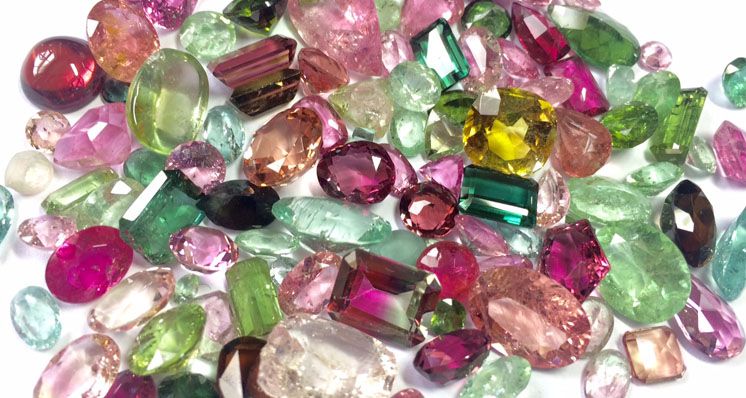 Tourmaline is the rainbow jewel of the gem world. No other gem is available in such an impressive array of colours. Paired with good durability and high lustre, this gemstone has become a favourite of many.

The hues, tones and saturations of tourmaline seem limitless, ranging from soft shades to vibrant explosions of colour. The desirability of the colour has a huge impact on price. The more vivid, rarer colours reach higher values, such as the coveted electric-blue copper bearing Paraiba tourmaline.

Many tourmalines have commercial names such as rubellite for pink to red tourmaline. It is also common to describe them simply with the pre-fix of their colour i.e., 'pink tourmaline'.

Tourmaline is also known for its colour-zoned or "parti-coloured" specimens, where different zones of colour can be seen in the cross-section or down the length of the crystal. These can be cut to display the different colour patterns either as slices, creative carvings, facetted or cabochon gemstones, or left as whole crystal specimens. The most popular colour-duo is watermelon tourmaline which display pink on the inside and a rim of green on the outside. 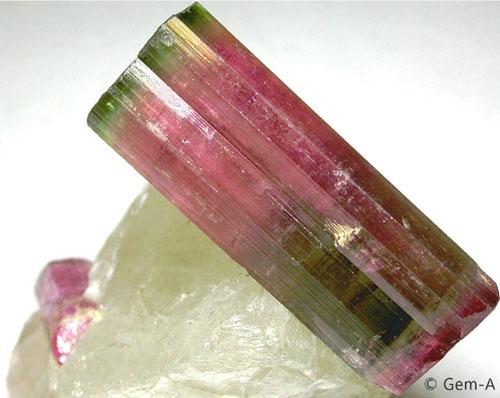 Tourmaline is a complex boro-silicate of aluminium, magnesium and iron and the vast selection of colours are due to trace impurities and colour centres. The availability of these impurities may vary during growth, which allows for the development of different layers of colour.

Read more: Getting to grips with multi-colour gemstones

Its chemical makeup is so complicated that it cannot be synthesized, and is therefore always of natural origin.

The crystals are easy to identify with the tell-tale rounded 3-sided, or 6-sided, cross sections. They are often long and prismatic with heavy striations down the length of the crystal and are topped with either a pyramid or a flat pinacoid. 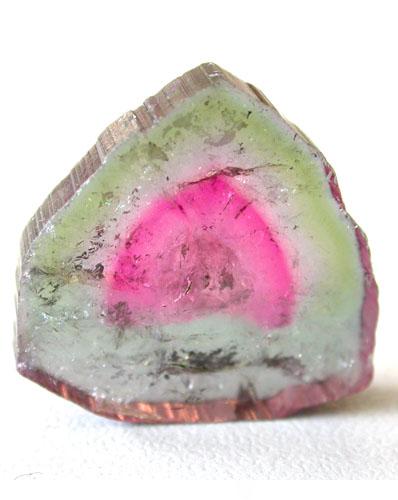 First discoveries have been attributed to both Brazil and Italy in the 1500's. The name of tourmaline was derived from the Sinhalese phrase tura mali, which was used by the miners and traders to refer to "unknown stones of mixed colours". The advancement of mineralogy allowed the recognition of tourmaline as its own gem species in the 1800's.

Since their discovery, tourmalines have been used as talismans for protection against toxins and radiation as well as many other healing properties which are associated with particular colours of tourmaline. They are said to emit far-infrared rays that penetrate the body and stimulate and soothe the tissue within.

This association is likely linked to the ability of tourmalines to become charged when heated, which is known as pyroelectricity.This property causes tourmalines to readily attract dust, and so a regular flick with a duster is recommended if they are displayed under hot lighting - arguably, a small inconvenience for such a stunner of a gem.

Tourmaline has a hardness of 7 - 7.5 and good toughness, making it suitable for use in jewellery. Inclusions are fairly common in tourmaline and many contain mirror-like fractures within them, which can be quite attractive, but may compromise the durability if knocked. Inclusion free stones are available and will fetch a premium price.

Parallel needle-like cavities are also common in tourmaline, which in vast numbers can create chatoyancy, or the "catseye", effect.

This article was written by Julia Griffith, FGA DGA EG at Gem-A for the Oct/Nov 2017 issue of The Jeweller - The magazine of the National Association of Jewellers

Tagged under
More in this category: « Understanding Spinel: The Alternative August Birthstone Birthstone Guide: Opal for Those Born in October »
Tweet
Become a Gem-A Member
Apply to become a Gem-A Member
Subscribe to our Newsletter
Keep updated with Gem-A
Sign Up
Get in Touch
Can't find what you're looking for?
Contact Us