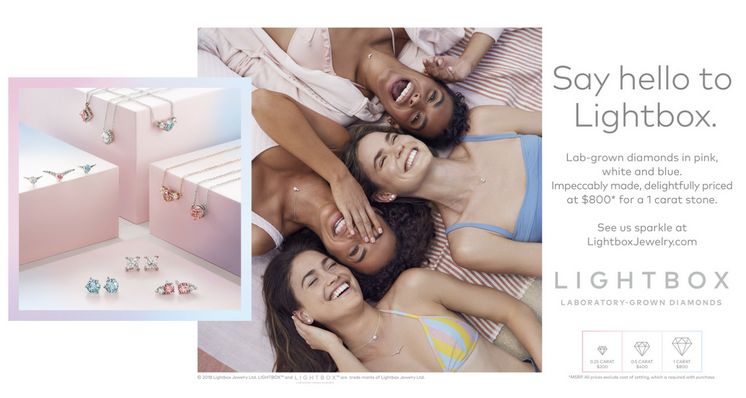 The De Beers Group has formally unveiled Lightbox Jewelry – a new fashion jewellery brand set with laboratory-grown diamond. Here, we find out more about the new business and why it has got industry tongues wagging.

Do you want to share your views? Email editor@gem-a.com with the subject line ‘Lightbox’.

Lightbox Jewelry promises high-quality fashion jewellery with a twist… pieces are set with pink, blue and white laboratory-grown diamonds. These diamonds will come from the De Beers Group’s Element Six business that has been ‘growing’ diamonds for decades, mostly for industry.
According to a press release, Lightbox Jewelry will forgo grading and instead price its diamonds based on carat weight.

The branding for Lightbox Jewelry. Courtesy of De Beers.

De Beers Group CEO, Bruce Cleaver, said: “Lightbox will transform the lab-grown diamond sector by offering consumers a lab-grown product they have told us they want but aren’t getting: affordable fashion jewellery that may not be forever, but is perfect for right now.

“Our extensive research tells us this is how consumers regard lab-grown diamonds – as a fun, pretty product that shouldn’t cost that much – so we see an opportunity here that’s been missed by lab-grown diamond producers. Lab-grown diamonds are a product of technology, and as we’ve seen with synthetic sapphires, rubies and emeralds, as the technology advances, products become more affordable. After decades of R&D investment, we’re able to offer consumers a better price today. While it will be a small business compared with our core diamond business, we think the Lightbox brand will resonate with consumers and provide a new, complementary commercial opportunity for De Beers Group.”

The brand will launch in the United States this autumn, with its primary focus being on earrings and necklaces. Retail partnerships are expected to follow later.

To support Lightbox, the De Beers Group is investing a total of US$94 million over the next four years into an as-of-yet incomplete Element Six production facility near Portland, Oregon. This will accompany its existing facilities in Oxford, United Kingdom. When complete, the new plant will allegedly be capable of producing upwards of 500,000 rough carats of lab grown diamonds in a single year.

Away from the official press releases, there has been a flurry of conversation around Lightbox and what it means for the trade as a whole. Below, we pose some questions (and make some open ended statements) about this shift…

Has De Beers set the agenda for a global industry?

What effect will Lightbox, its pricing structure, marketing language and decision to sell pinks and blues as the same price as white lab grown diamonds, have on the industry? The first thing to note is that De Beers is steering clear of any ethical conversations, with Lightbox general manager, Steve Coe, quoted in the New York Times as saying: “Given the pressure required to create lab-grown diamonds, it’s akin to the Eiffel Tower being stacked on a can of Coke.

"If you look at the detailed numbers, the energy consumption levels between natural and man-made diamonds are in the same ballpark.” Therefore, businesses that are promoting their lab grown offer as more ethical, sustainable or environmental, may come up against more probing questions from consumers.

Lightbox reveals how far the CVD process has come

De Beers is utilising massive advances in chemical vapour deposition to bring its vision of Lightbox to life – something that would have seemed impossible five to 10 years ago. What will happen as this technology improves? One thing that is clear is De Beers will promote lab grown diamonds as simply ‘coming off a production line’, therefore stripping them of inherent value in the long term. 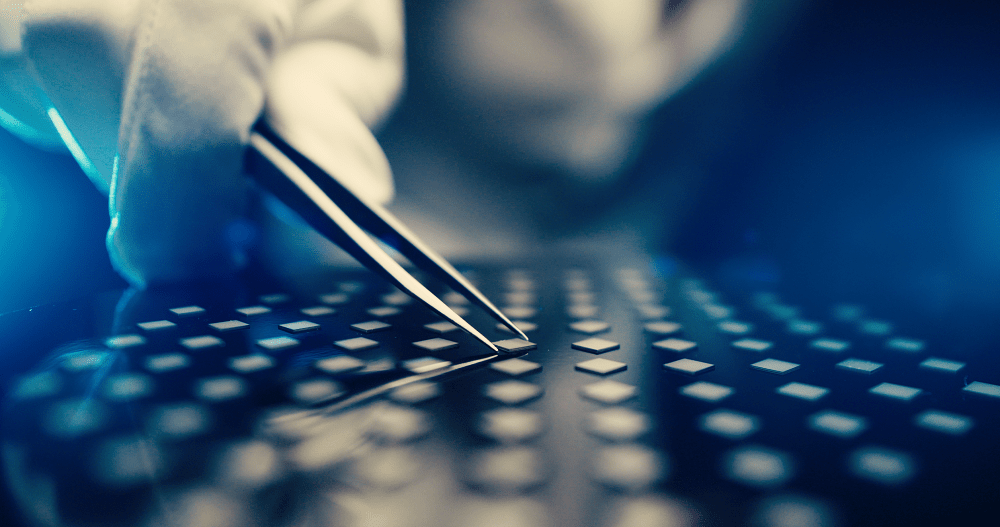 According to Rapaport, De Beers CEO Bruce Cleaver predicts Lightbox Jewelry could bring in US$200 million annually for the company. This is a drop in the ocean compared to the company’s US$6 billion natural diamond business. What is clear, is that De Beers views the lab grown diamond market as a way of making profit.

This is the rather explosive statement made by Bruce Cleaver to Rapaport magazine, which is likely to cause headaches for a number of international lab grown diamond manufacturers, many of whom have been pricing their product at 20% less (or at least more comparable) than its natural counterpart.

By saying every one carat diamond is US$800, De Beers has set a precedent that will be difficult to counter, unless it can be somehow shown that Lightbox diamonds are of poorer clarity or quality, despite their carat weight.

Cleaver continues on diamonds.net: “Pricing of lab-grown diamonds, because it’s a fashion item and there’s no uniqueness, is completely binary. If it takes you a week to make a quarter of a carat and two weeks to make a half-carat, you’d expect the half-carat to sell for twice [the price of] the quarter of a carat. That’s very different to the natural business, where the pricing is different.

"It’s really all in the offering and in being clear to consumers that this is a good business for us, a fun business, but it’s a totally different business. Consumers tell us things like, for example, these are the kinds of things you can take on holiday and you can lose in the sea. You’d never do that with your [natural] diamond.” 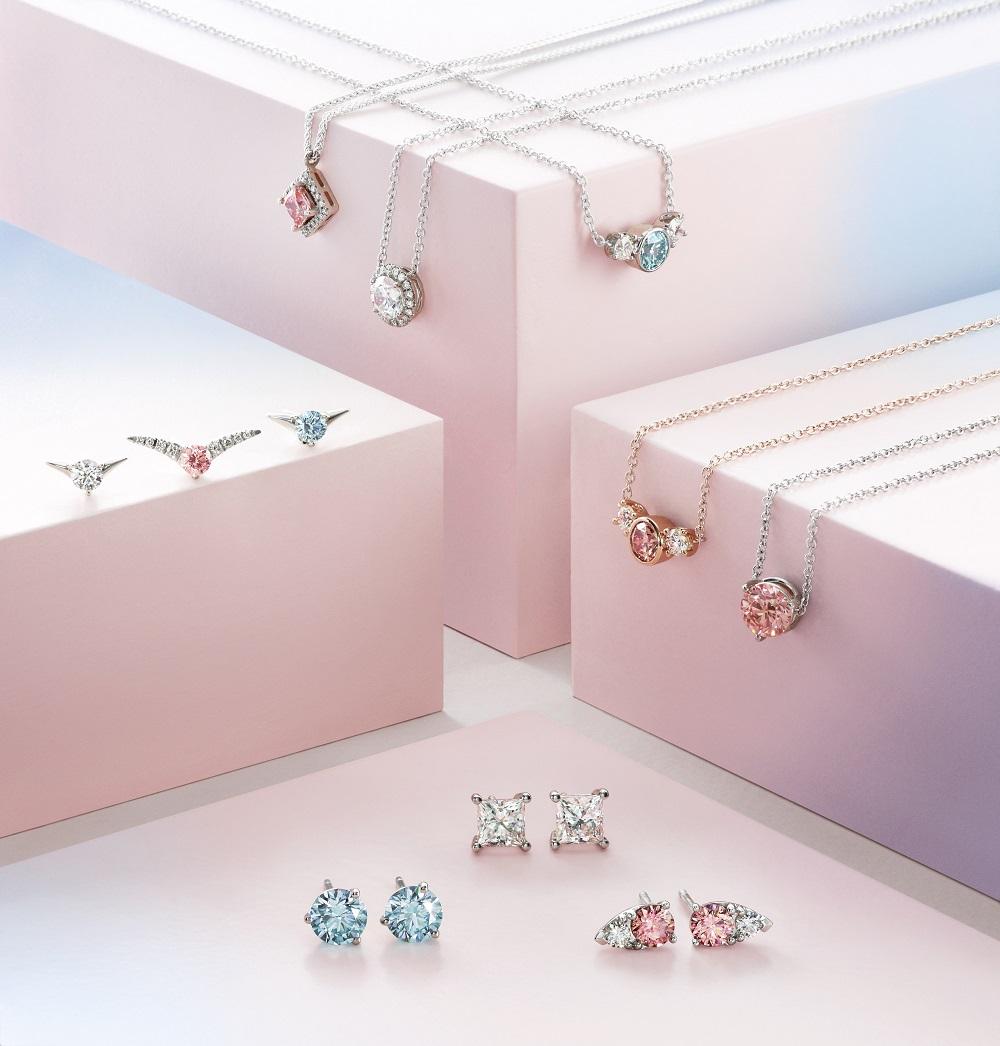 Elsewhere, in an article titled ‘Diamonds Are Forever,’ and Made by Machine in the New York Times, one particularly enlightening paragraph reads: “Although diamonds made by companies like Diamond Foundry in the United States and New Diamond Technology of Russia usually cost 30 to 40 percent less than their natural counterparts, they are nowhere near as cheap as the ones from Lightbox, which will undercut its competitors by roughly 75 percent.

Through its aggressive pricing and pointed marketing, De Beers clearly aims to be a dominant player in this growing market, while simultaneously protecting its core business.”

Lab grown diamonds for your engagement ring… forget it!

Following from this, the throwaway marketing that surrounds Lightbox’s diamonds and sterling silver settings, suggest that proposing lab grown diamonds for sentimental jewellery, like engagement rings, is going to be an uphill battle. If they’re marketed at teens, why would a thirty-something bride-to-be want to wear a lab grown diamond engagement ring for the next 50 years?

This is not a ‘first step’ into the mined diamond market

De Beers is not marketing its lab grown diamonds as a ‘first step’ or ‘entry’ into diamonds. Far from it. This is cheap and cheerful jewellery, and is not to be considered on the same ladder. Its two offers are two very different beasts. Even its own website, here, poo-poos the notion of lab grown diamonds being special by highlighting the fact that “the same lab-grown diamond can be used in cutting-edge technology” under the headline ‘Brilliant Stuff… Or Not’.

By launching Lightbox, De Beers has once again put itself at the forefront of the conversation and is setting the agenda for everyone else – arguably something it did during its peak in the 1980s (and continues to do today) in the mined diamond space.

More in this category: « The Famous Diamond Collection of Cardinal Mazarin (1602-1661) What is the Link Between an Emerald and the Emerald-Cut? »
Tweet
Become a Gem-A Member
Apply to become a Gem-A Member
Subscribe to our Newsletter
Keep updated with Gem-A
Sign Up
Get in Touch
Can't find what you're looking for?
Contact Us