“Talk to me, Harry Winston, tell me all about it!” That’s just one of the immortal lines from Diamonds are a Girl’s Best Friend, sung by Marilyn Monroe… and it turns out the renowned American jewellery house has plenty to say, especially when it comes to extraordinary gemstones.

With the nickname ‘the King of Diamonds,’ Mr. Harry Winston (1896-1978) was a visionary in the world of larger-than-life diamonds and red carpet fine jewellery. He founded his eponymous business in New York in 1932 and swiftly became known as the go-to source for Hollywood screen legends and royal dignitaries.

Learn more: Coloured Diamonds from Least to Most Valuable

Before this though, Winston had learned a few tricks. In the 1920s, while navigating the competitive diamond market via his first business, Premier Diamond Company, Winston quickly discovered an alternative source for purchasing more affordable gemstones — estate jewellery auctions. His natural eye for diamonds and gems meant Winston could get his hands on exceptional stones, remove them from their outdated settings and re-cut them into more contemporary styles that enhanced their natural beauty and brilliance.

Throughout the course of his career, it is estimated that Harry Winston owned more than one-third of the world’s most famous diamonds. Of those diamonds, perhaps the most famous is the Hope Diamond, which Harry Winston procured in arguably one of the most significant estate jewellery sales in history. The magnificent blue gem had belonged to American socialite Evalyn Walsh McLean, who wore it to parties at her home in Washington, D.C.

Following her death in 1947, the Hope Diamond was put up for sale along with McLean’s impressive jewellery estate, which also included the 94.80 carat Star of the East. By 1949, the purchase was complete, and the Hope Diamond took its place among Harry Winston’s most cherished gemstones. So, what other treasures could be found in Harry Winston’s safe? 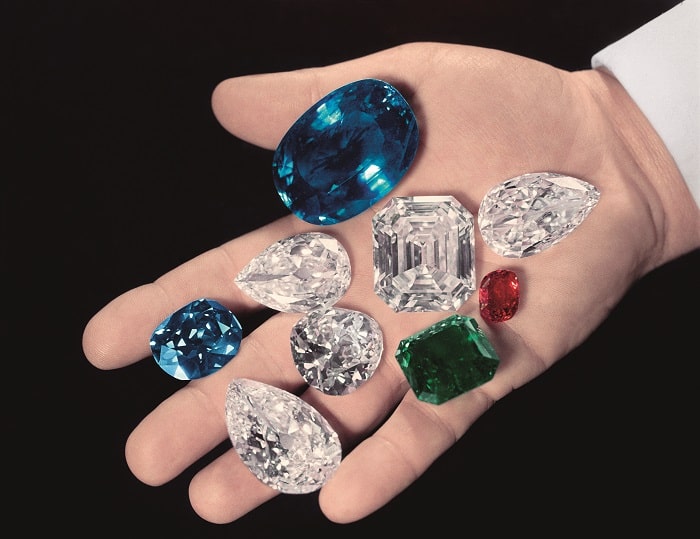 Harry Winston holds famous stones in the palm of his hand, including The Indore Pears, Catherine The Great Sapphire, The Jonker I, Hope Diamond,
a 14 carat ruby, a 42 carat emerald, The Idol’s Eye and The Star of the East. Image courtesy of Harry Winston.

Here, we outline some of the most fantastical diamonds that passed through his hands…

With its unusual shape and exceptional size (90.38 carats) and quality (D colour), the Briolette remains as one of the world’s rarest gemstones. Purchased in 1947 by an Indian maharaja, who wore the stone as both a pendant and as a diadem, the Briolette was acquired and sold by Winston on several other occasions, before ultimately being purchased by a European family in 1971.

The history of the Idol’s Eye is shrouded in mystery — discovered in India in the 17th century, the stone disappeared for nearly 300 years before resurfacing in the possession of a Sultan in 1909. Winston purchased the unusually shaped 70.20-carat flawless oval-cut diamond in 1946, nearly 10 years after he first set his sights on acquiring the intriguing stone.

In 1946, Harry Winston purchased two pear-shaped Golconda diamonds from the former Maharaja of Indore. The two teardrop-shaped stunners, at 46.62 and 44.18 carats respectively, were purchased and sold by Winston on three separate occasions between 1953 and 1976, with his last sale to a member of a royal family.

Acquired by Harry Winston in 1935, the 726 carat Jonker was not only Winston’s first important diamond, but also the first major piece of rough to be cut in America. Given the high risks associated with cleaving a diamond – especially one of that size – Winston’s insurance company refused to cover him against any loss on the stone. After 14 months of preparation, the Jonker was successfully split, producing 12 diamonds in total. The largest was a 125.35 carat emerald-cut, which Winston loved so much that he refused to sell it for 14 years.

Originally discovered in 1967 in the South African kingdom of Lesotho, the 601 carat rough diamond was purchased by Winston in 1969. At his request, the cleaving was broadcast on live television, and eventually the diamond was cut into 18 unique stones, the largest being a 71.73 carat emerald-cut. Perhaps the most famous was the Lesotho III, a 40.42 carat marquise shape, which was purchased by Aristotle Onassis as an engagement ring for Jacqueline Kennedy.

Named for Washington socialite and jewellery connoisseur, Evalyn Walsh McLean, the 31.26 carat diamond was purchased from McLean’s estate in 1949, along with the Hope Diamond and the Star of the East (94.80 carat, D colour). The McLean would later become one of the most beloved jewels worn by the Duchess of Windsor Wallis Simpson, who purchased the stone from Winston in 1950.

Discovered in Brazil in 1938, the Vargas was Winston’s second important diamond purchase. He pursued the 726.60 carat rough across three continents before he was finally able to purchase the stone. Once the diamond was successfully split, Winston’s cleaver passed out from the enormous amount of stress associated with the cutting of the stone. In total, the Vargas resulted in 29 individual diamonds. 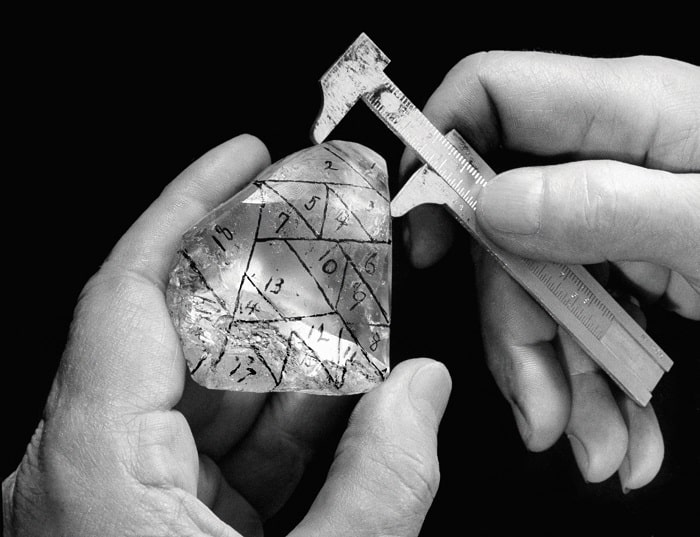 Once believed to have been a part of the Portuguese Crown, the 127.01 carat emerald-cut diamond was purchased in 1951. In 1963, the Smithsonian Institution acquired the stone from Winston, where it remains on permanent display.

The 75.52 carat, D flawless diamond was cut by Harry Winston from a 204 carat piece of rough in 1976. Rumoured to have been carried in his pocket – just for the pleasure of having such a perfect stone near to him – Winston named the diamond the Star of Independence, in celebration of the American Bicentennial.

Harry Winston’s legacy and passion for exceptional stones continues to this day through his namesake company. In 2013, for example, Harry Winston Inc. acquired a 101.73 carat flawless and colourless diamond, now known as the Winston Legacy, and the following year it secured a rare 13.22 carat, internally flawless, fancy vivid blue diamond, named the Winston Blue. It seems where there are one-in-a-million, world-class diamonds, the names ‘Harry’ and ‘Winston’ are not far behind. ■

Read more about diamonds in our Diamond Guide, part of the Gem-A Gem Hub. You can also discover further insights into the history and heritage of Harry Winston, here.

To expand your diamond knowledge, take a look at the Gem-A Diamond Diploma.

Main image: The Hope Diamond worn at the Bal de Tête held at the Ritz-Carlton on November 15, 1949. Image courtesy of Harry Winston.