Coloured diamonds are not only wonderful to look at, but they are also a fascinating area of study for many gemmologists and scientists across the world. They add a depth of complexity to diamond grading and have such commercial appeal that entire brands have been built around specific hues, especially pink diamonds. A good place to start in your investigations is our buying guide devoted to diamond colours, which also highlights what elements and processes are involved in specific diamond hues. 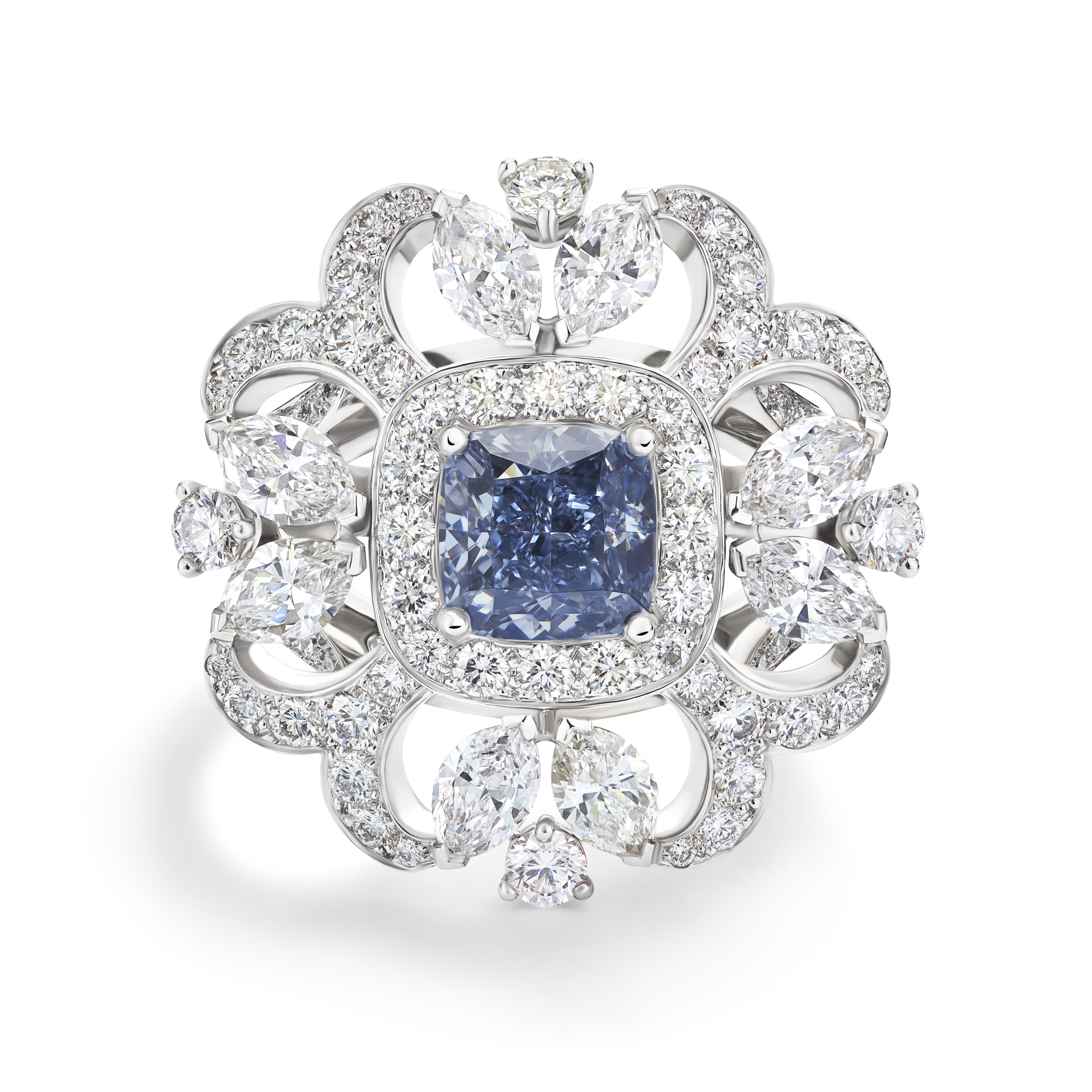 Some of the world’s most famous colourless diamonds are recognised for their enormous size. However, with fancy colour diamonds, even a relatively small carat weight can secure huge prices at auction if the natural colour is saturated and has an even tone. When large carat weights and ‘fancy vivid’ qualities merge in a single stone there is almost no telling what prices can be achieved.

Boron is one of a handful of elements with atoms small enough to ‘infiltrate’ a diamond crystal lattice and substitute a carbon atom. In the case of blue diamonds, only an infinitesimal amount of boron is required to produce blue colour. This happens because boron causes a diamond to selectively absorb red wavelengths and selectively transmit blue light to the observer’s eye.

Below, you will find some of the largest and most significant blue diamonds to have been sold at auction in recent years. Elsewhere, you can read about the Mouawad Blue Diamond, previously known as the Tereschenko Blue Diamond, which is also a useful stone to know for diamond enthusiasts.

The rough material from which this stone was cut was first discovered in April 2021. The resulting 15.10 carat step-cut blue diamond was sold at Sotheby’s Hong Kong in April 2022 for US $57.4 million, well above its $48 million estimate. To put this diamond in perspective, only five examples of internally flawless fancy vivid blue diamonds over 10 carats have ever come to auction, none of which ever exceeded 15 carats. According to its grading report, the De Beers Cullinan Blue Diamond is a Type IIb – a rare category that represents less than 0.5% of all diamonds. 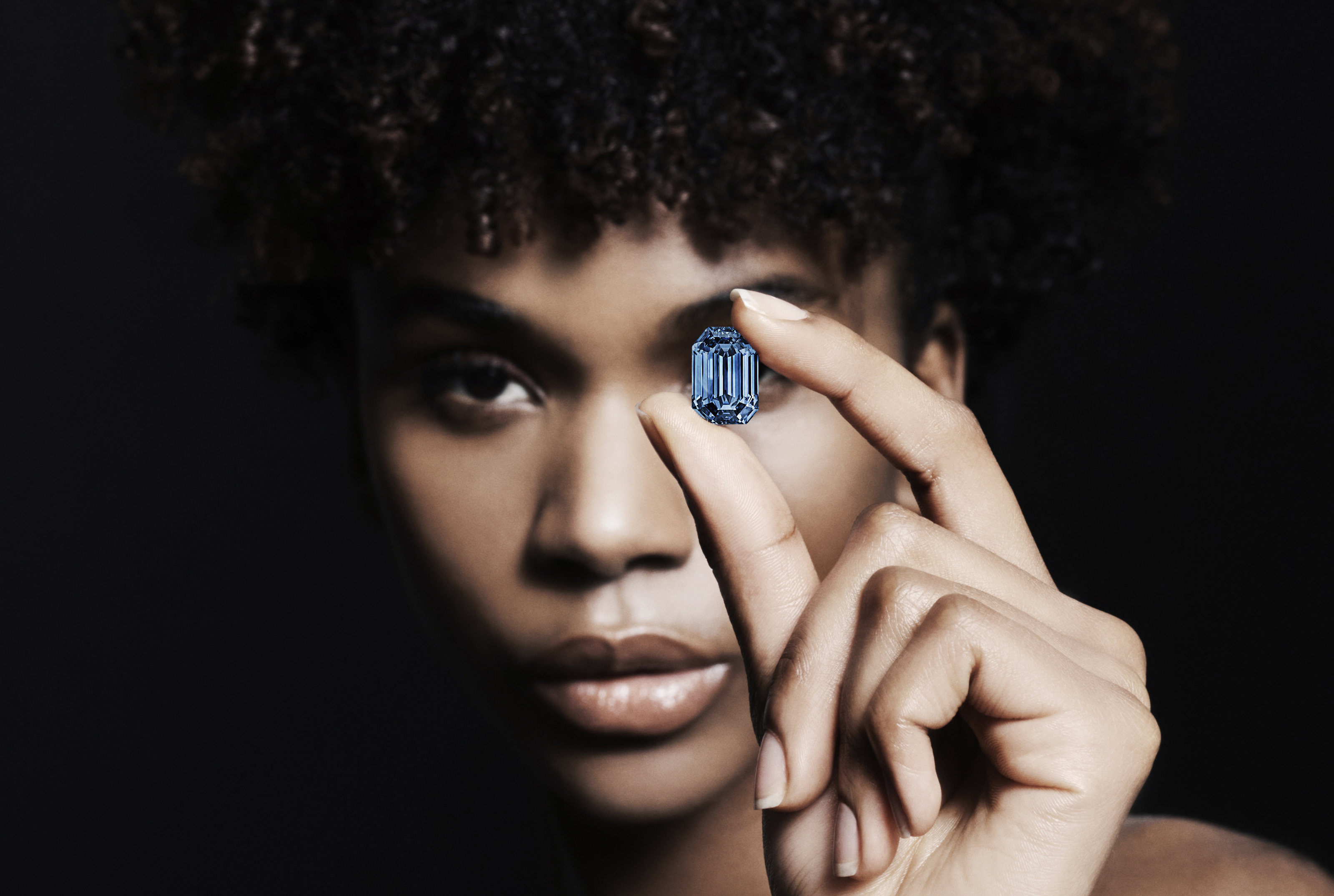 Why the name Cullinan? This diamond hails from the Cullinan Mine in South Africa – a famous location for diamonds and specifically blue diamonds. This mine is also where the 530 carat Great Star of Africa diamond was uncovered and where the 10.10 carat De Beers Millennium Jewel 4 was uncovered. The latter sold at auction in 2016 for US $31.8 million. Another important location was the Argyle Diamond Mine in Western Australia, although this mine has recently closed.

The Oppenheimer Blue Diamond – a fancy vivid step-cut diamond of 14.62 carats and VVS1 clarity - continues to hold the price record for a fancy vivid blue diamond sold at auction. It achieved a staggering $57.5 million when it sold in 2016. While this holds the total price record, it’s the next diamond – the Blue Moon of Josephine – that holds the price per carat record, so it is important to understand this distinction. 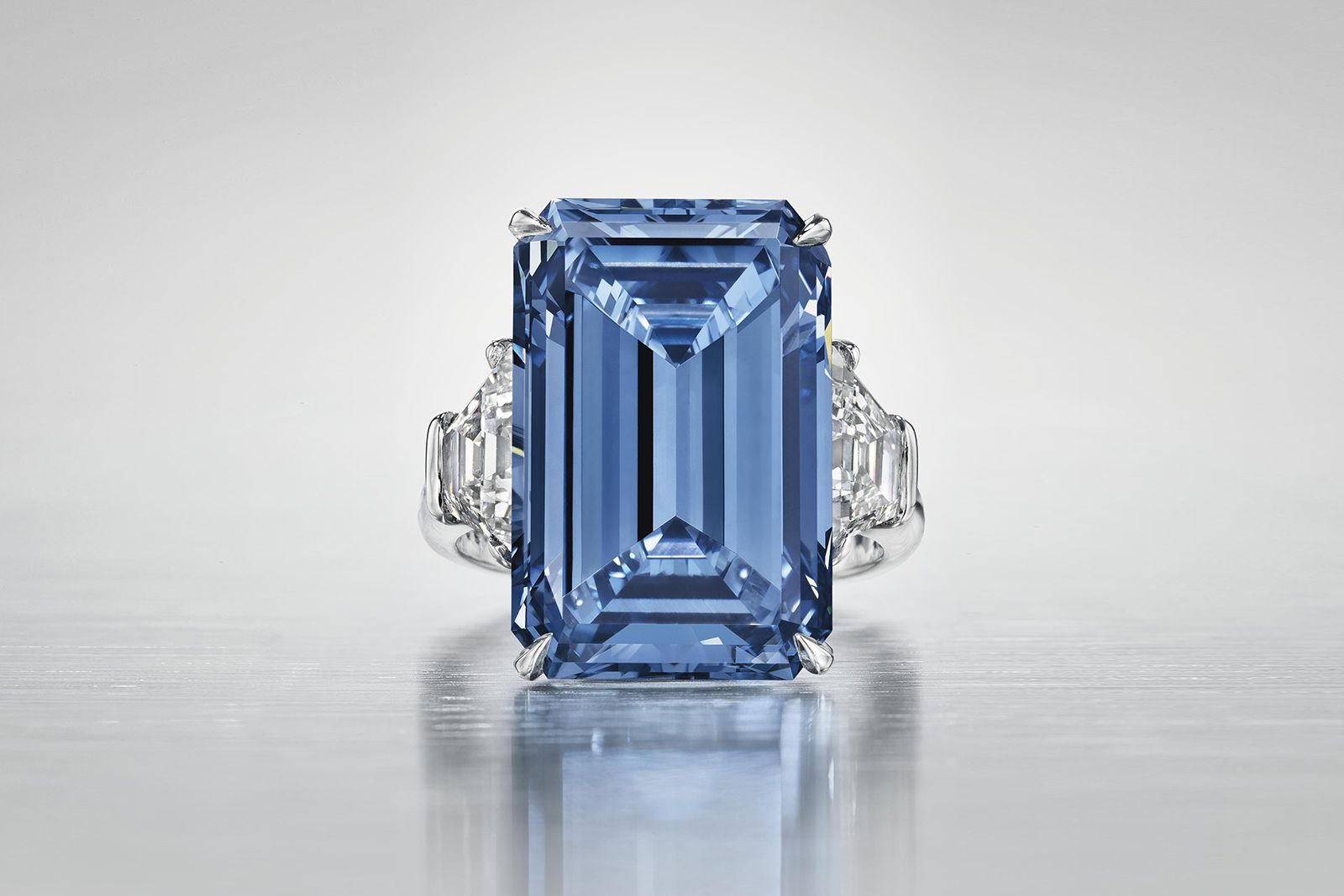 The Oppenheimer Blue Diamond at 14.62 carats. Image courtesy of KaterinaPerez.com.

The Blue Moon of Josephine

With a per-carat price of US $4,028,941, the Blue Moon of Josephine is still a record-breaker in the blue diamond world. It’s a 12.03 carat fancy vivid blue cushion-shaped stone and it was sold by Sotheby’s in 2015. In fact, the diamond was simply known as “Blue Moon” until the new owner renamed it and added “Josephine” as a tribute to his daughter. The Hong Kong-based billionaire purchased the stone for her as a special gift! 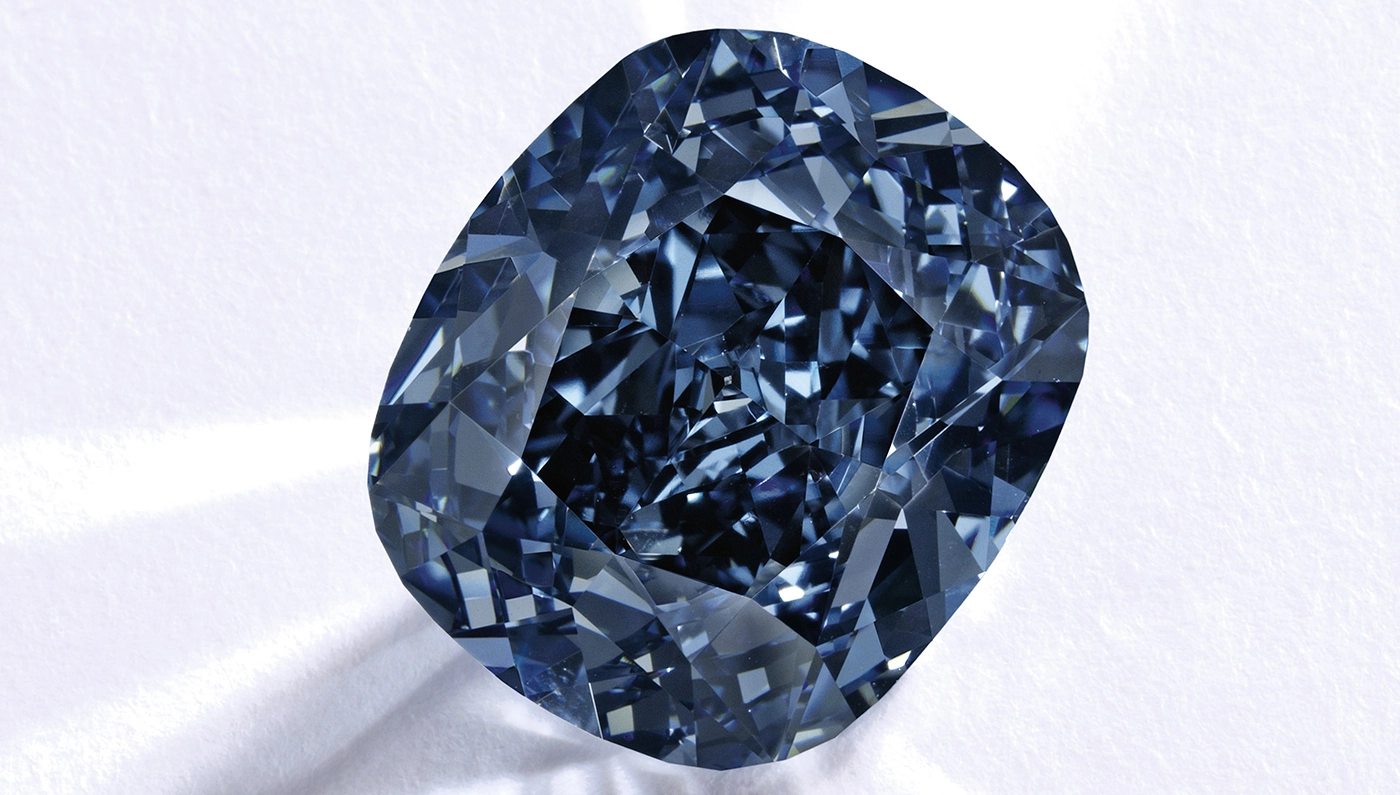 The Blue Moon of Josephine diamond at 12.03 carats. Image courtesy of robbreport.com.

Sometimes diamonds are sold at auction when they are already set in fine jewellery pieces. Although it is the diamond that is the star of the show, the quality of the jewellery design it is sent in (and the provenance of the piece) can also play a part. A good example of this is the Sky Blue Diamond – an 8.01 carat square-cut VVS1 fancy vivid blue diamond that was sold set in a Cartier ring. When the hammer fell at Sotheby’s Geneva in 2016 it had secured a price of US $17 million, which is more than US $2 million per carat.

This diamond was part of the collection of Mrs Paul Mellon, which was sold in 2014. Her treasures also included fine jewellery by Cartier, Van Cleef & Arpels and Verdura. The Zoe Diamond is a pear-shaped fancy vivid blue stone of 9.75 carats and it achieved an impressive US $32.6 million at auction.

We have hinted at it already, but the De Beers Millennium Blue diamond also deserves a place on this list. It’s a 10.10 carat, oval-shaped, internally flawless stone and was sold at Sotheby’s Hong Kong in April 2016 for US $31.8 million.

The Memory of Autumn Leaves Diamond

When diamonds become especially large or achieve notoriety, they are often given exclusive names. A ‘matching’ pair of diamonds – Apollo and Artemis – were unveiled in 2017 with one being fancy intense pink and the other fancy vivid blue. When they were sold for US $15.3 million and $42 million, respectively, they were renamed by their owner to The Dream of Autumn Leaves and The Memory of Autumn Leaves. The blue diamond is 14.54 carats, internally flawless and Type IIb, whereas the pink diamond is 16 carats, VVS2 clarity and Type IIa. The stones were presented to the world as a stunning pair of earrings with added pear-shaped colourless diamond studs. 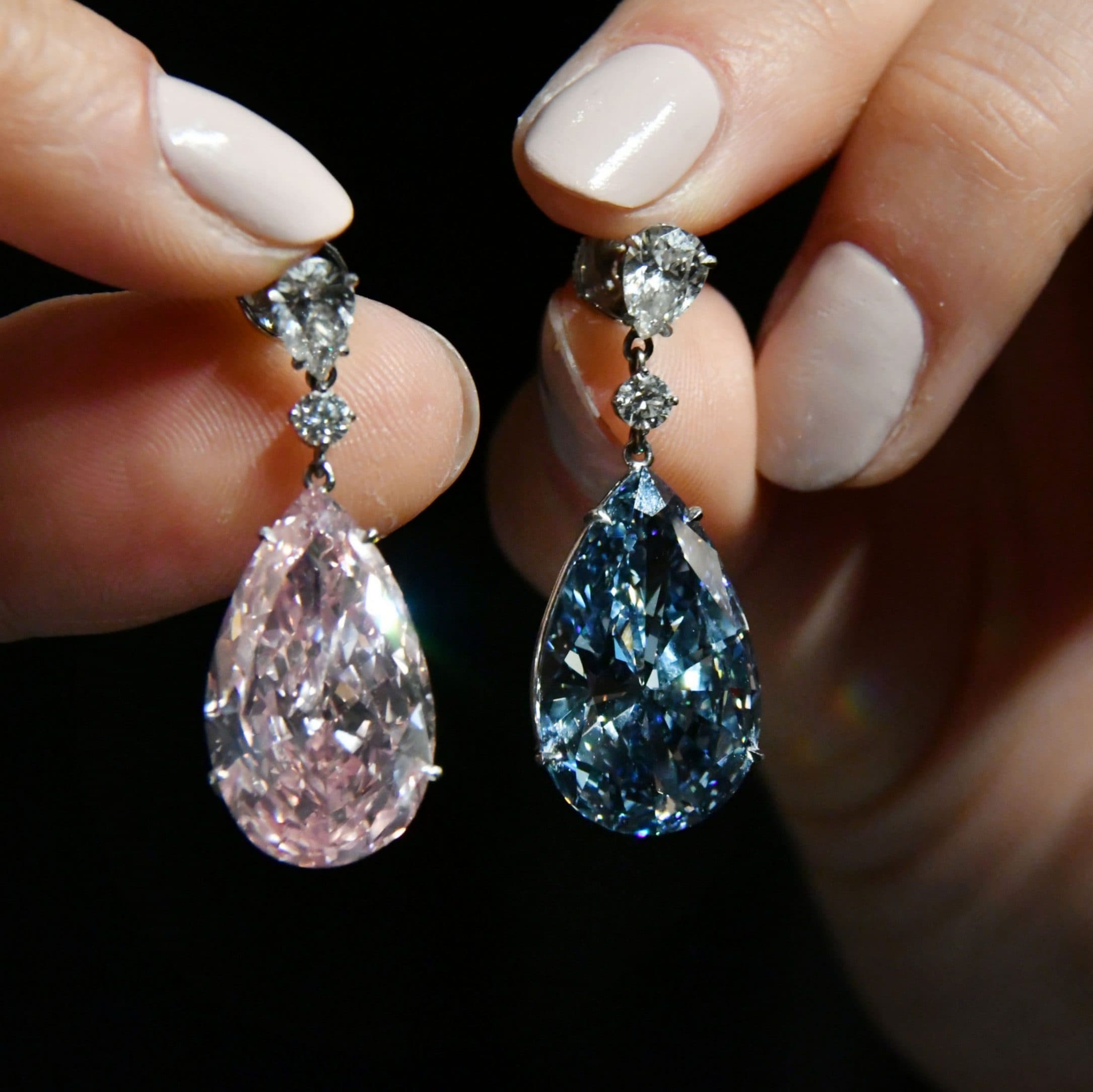 The Farnese Blue (sold for US $6.7 million in 2018) is a slightly mysterious diamond of 6.16 carats. It’s actually a fancy dark grey-blue diamond that has provenance spanning European royal families from Spain to Austria.

Another diamond with a long history is the Wittelsbach-Graff Diamond – a 35.56 carat fancy deep greyish blue diamond believed to come from India’s famous Golconda mines. The stone was purchased by British diamond jeweller, Laurence Graff, for approximately GBP £16.3 million in 2008. It was then recut (taking its weight to approx. 31 carats), reevaluated by the Gemological Institute of America (GIA) and resold.

And let’s not forget the Hope Diamond – one of the most internationally well-known diamonds that’s now on display at the Smithsonian Institute. It was purchased by Harry Winston in the 1940s but can be traced back to the 17th century when it was known as the ‘Tavernier Blue’. It’s an incredible 45.52 carats and has a fancy dark greyish blue colour.

To take your knowledge of diamonds to the next level, speak to our Education Team about the Gem-A Diamond Diploma.

If you’d like to start at the beginning with fundamental gemmology knowledge, discover our GemIntro Level 2 course.

More in this category: « The Famous Diamond Collection of Harry Winston
Tweet
Become a Gem-A Member
Apply to become a Gem-A Member
Subscribe to our Newsletter
Keep updated with Gem-A
Sign Up
Get in Touch
Can't find what you're looking for?
Contact Us