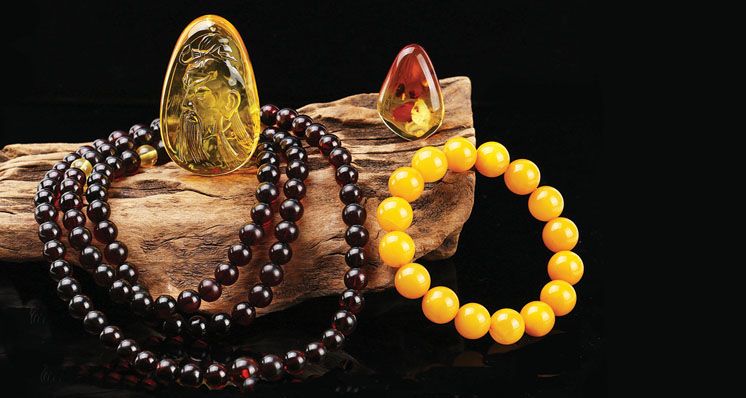 Amber is an organic gem. Organic gems are the products of living or once-living organisms and biological processes. The fossilisation process of amber involves a progressive oxidation, where the original organic compounds gains oxygen, and polymerisation, which is an addition reaction where two or more molecules join together. This process produces oxygenated hydrocarbons, which are organic compounds made of oxygen, carbon and hydrogen atoms.

What about “Beeswax amber”?

Beeswax amber is sub-translucent or opaque due to abundant microscopic bubbles.

(a) Surface features of aged beeswax amber may include oxidation cracks, as shown here on sample JD-2; note the unoxidized centrelines and only minor 'bleeding' of adjacent colour. (b) By contrast, cracks formed in beeswax amber during natural weatheing have dark centrelines with more extensive 'bleeding' of colour, as seen here on untreated amber JB-3. Photomicrographs by Y.Wang; magnified 20x.

What about “Sun spangles”?

In heat treated amber, discoidal stress fractures are produced by expansion and decrepitation after the pressure equilibrium of the bubbles within the amber has been abruptly broken. Those fractures are referred to as “Sun spangles”. The presence of large and numerous sun spangles within amber provide immediate evidence of heat treatment.

The main purposes of amber heat treatment are to improve or alter the colour, enhance the clarity and produce inclusions that have an appealing visual effect (“Sun spangles”). Methods include clarifying, baking (oxidation), decrepitating and ‘beeswax ageing’.

This paper provides a detailed characterization of Baltic amber samples that have been treated in experiments by Wang et al.(2014). Standard gemmological instruments were used as well as FTIR and Raman spectroscopy to document changes in the physical, optical and spectroscopic properties of the samples before and after treatment. The formation mechanisms of the features seen in heat treated amber are discussed, and criteria for identifying heat-treated amber are presented.

'Sun spangles', or discoidal stress fractures, were exhibited by heat-treated amber samples that underwent decrepitation. They are shown here within: (a) golden fire amber JE-5 (magnified 15x) and (b) red fire amber JC-3 (20x; the red colour of this particular discoid fracture is partially obscured by yellow reflections from the surrounding amber). Photomicrographs by Y.Wang.

What about the “Baltic shoulder”?

Infra-red spectroscopy is the most effective scientific method for identifying fossil resins. With this technique broad absorptions will be witnessed in Baltic amber in the 1260-1160 cm-1 range. Those are assigned to C-O stretching vibration. These features known as “Baltic shoulder” are specific to Baltic amber and are related to the presence of succinic acid. Baltic amber, also called succinate, contains 3-8% succinic acid.

The gemmological and spectroscopic features of untreated versus treated amber are listed in the table below:

(*) Progressively with clarification and oxidation 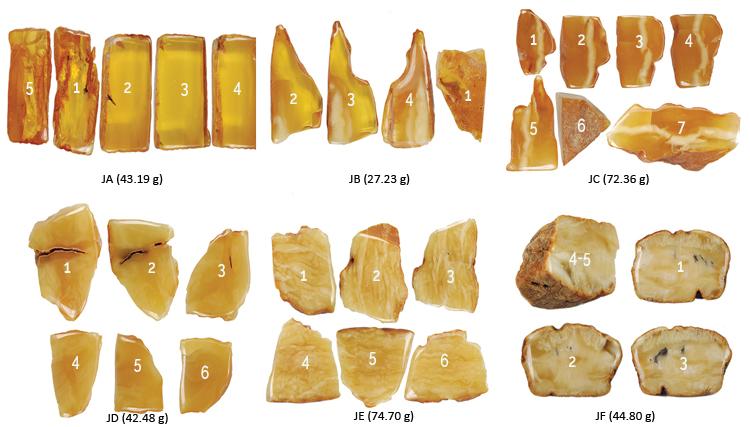 Untreated amber specimens from Kaliningrad Russia, were sliced into multiple pieces for heating experiements. Each sample number is shown with the total weight of all the slices. Photos by Y.Wang 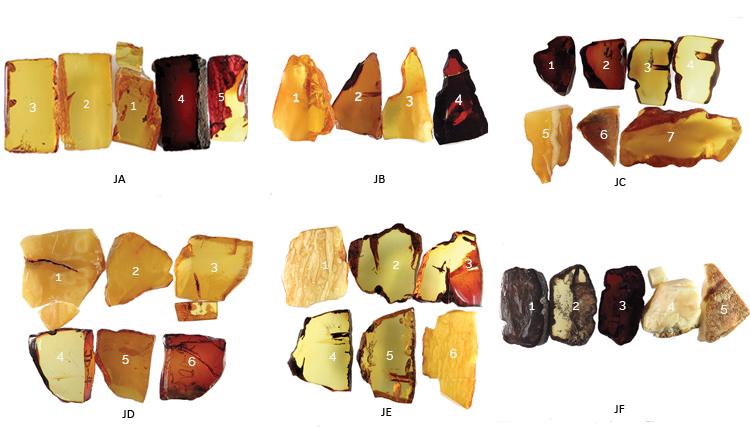 Pictured here are the same samples in the pictured above following various treatment processes, as described in the text and in the table above. Photos by Y.Wang

What about the variations of the FTIR features after heat treatment?

A decrease of the absorption of the major band at 2932 cm-1 suggests that the saturated C-H bond was broken down by heating. An increase in intensity of the absorption at 1732 cm-1 suggests that oxygen involvement enables a higher concentration of the C=O functional group. The extinction of the weak absorptions at 1645 and 888 ccm-1 corresponds with the breaking of the unsaturated C=C double bond of the exocyclic methylene group. Heat treatment leads to fewer saturated C-H bonds and unsaturated C=C double bonds in amber, in correlation with more oxygen-bearing functional groups and higher degree of polymerization.

What about the variations of the Raman features after heat treatment?

FT-Raman spectra indicate that the number of saturated C-H bonds (1444 cm-1) consumed by oxidation during amber heat treatment is greater than that of unsaturated C=C double bonds (1645 cm-1) consumed during the process, and thus higher intensity ratio (I : 1645 cm-1/I = 1444 cm-1) indicate a greater degree of oxidation. 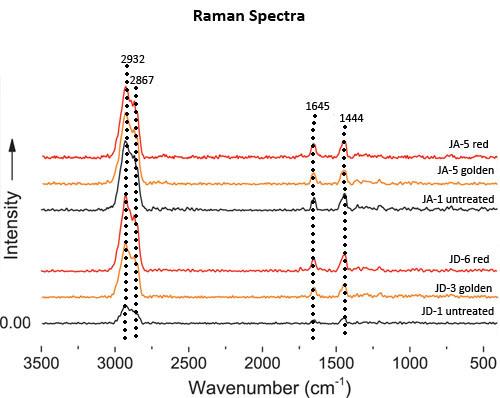 Representative FT-Raman spectra are shown for sample groups JA and JD, both before and after heat treatment.

What are the conclusions reached for the spectral intensity ratios after heat treatment?

The treatments of amber are increasing in number and complexity. Baltic amber is the most versatile when it comes to treatments.

This is a summary of an article that originally appeared in The Journal of Gemmology entitled ‘Gemmological and Spectroscopic Features of Untreated vs. Heated Amber’ by Yamei Wang, Mingxing Yang, Shufang Nie and Fen Liu 2017/Volume 35/ No. 6 pp. 530-542

Tagged under
More in this category: « Inclusions Acting as Geological Fingerprints in Yellow Danburite from Vietnam How to Separate Natural from Synthetic Ametrine using Conventional Equipment »
Tweet
Become a Gem-A Member
Apply to become a Gem-A Member
Subscribe to our Newsletter
Keep updated with Gem-A
Sign Up
Get in Touch
Can't find what you're looking for?
Contact Us