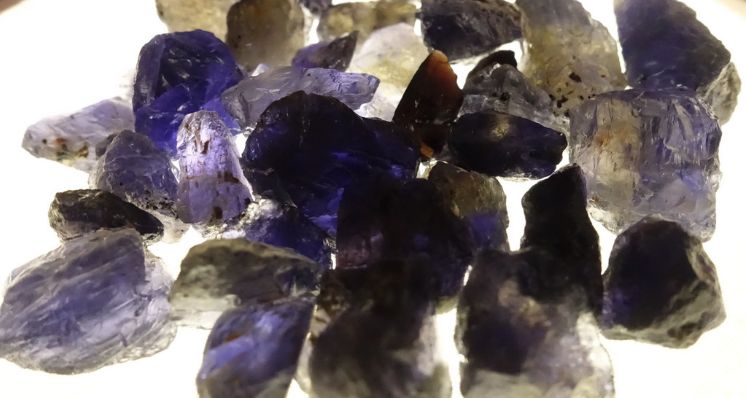 Few gemstones can boast myriad colours like iolite, one of the most uniquely pleochroic gemstones known. Pleochroism is the name given to the optical effect where a gemstone displays different colours along the different directions in which it is viewed.

One of the pleochroic shades of blue in iolite resembles that of a sapphire so closely that it has earned the title of saphir déau or ‘water sapphire’. When viewed with the naked eye, iolite shows three different pleochroic colours, thus, it is said to be trichroic. The name ‘iolite’ itself is derived from the Greek word ion, which means violet. 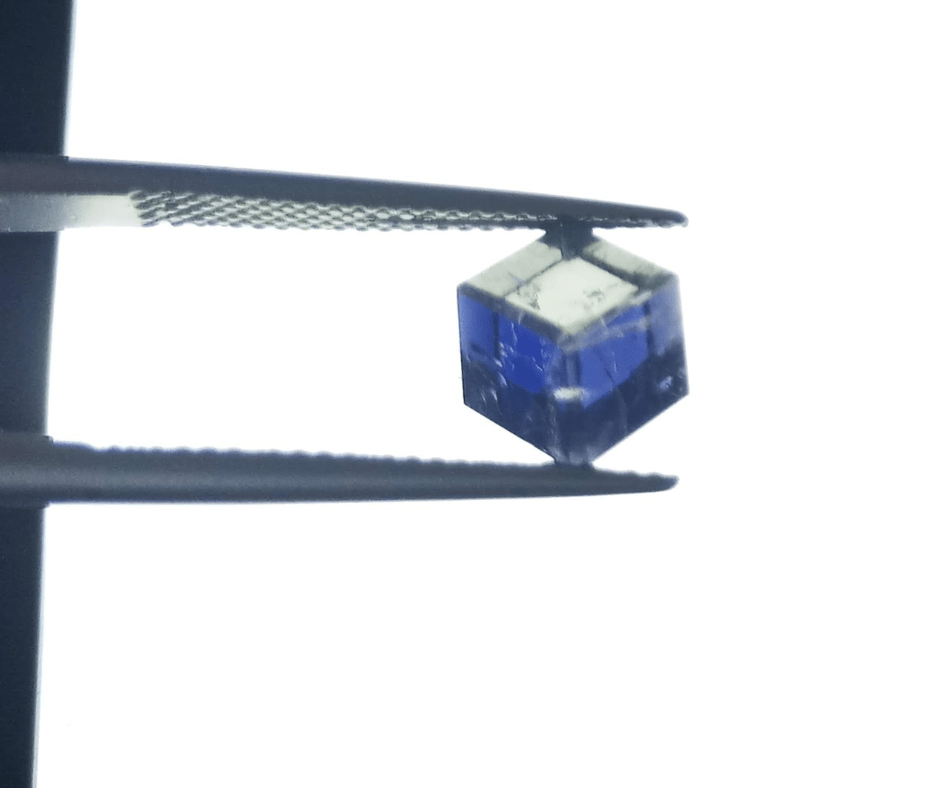 An iolite cube cut to display all three pleochroic colours.

As the legend goes, Vikings would carry plates of iolites on board their ships. On cloudy or foggy days with excessive haze and low visibility, it was difficult to mark the exact position of the sun in the sky.

In such instances, navigators would use their iolite plates as a polarizing filter to pinpoint the location of the sun and, using a sundial, determine the geographical north, thus steering the ship back to its correct course; this lead to another common name for iolite: the Viking Compass Stone.

In India, one prime source of these beautiful gemstones are the gem-bearing lithologies of the southern states. Of these, Tamil Nadu has multiple small pockets of gem quality iolites littered around veins found over its vast rolling plains and steep hills. The rocks of southern India converge through a huge network of shear zones and faults to form a lattice of highly metamorphosed rocks.

These rocks guard a variety of different gemstone species. Iolites, rubies, alexandrites, sphenes, sunstones, rock crystals, zircons, aquamarines, and emeralds are just some of the many beautiful gem quality mineral specimens found nestled in these formations. 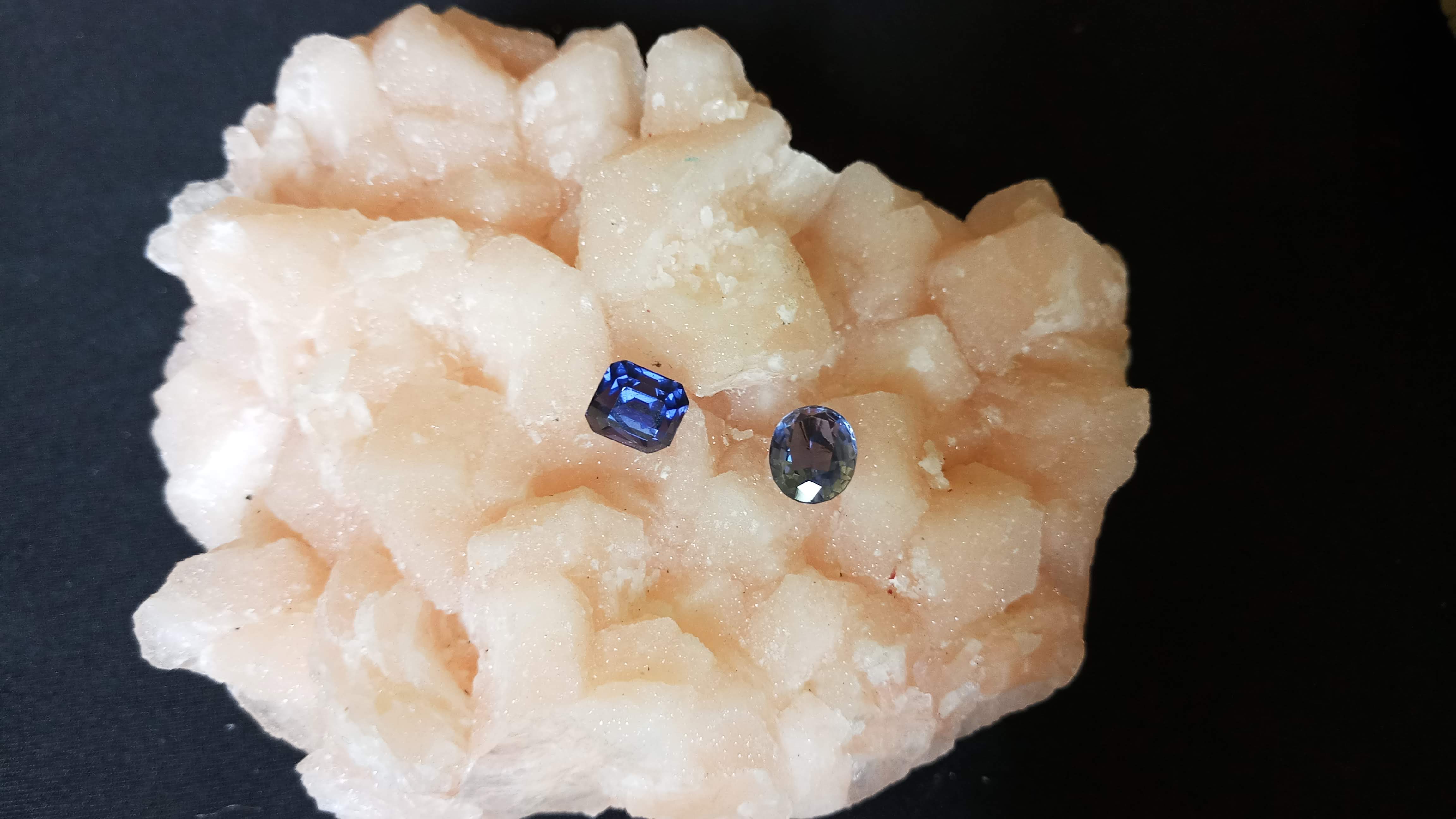 The Palghat-Cauvery Shear Zone is especially famous for its abundant gemstone mineralization. Iolites, however, may be found sporadically over this large area. Places like Lachmanapatti, Malapatty, Kiranur, Karur, etc., are well known for the presence of gem quality iolite.

Obtaining these coveted specimens, however, is not an easy feat. In some cases, they may be mined out of very large pits, or quarried from exposed cliffs. The locals have their own method of extraction: they excavate vertical shafts with a cross sectional area of one square metre extending down to depths of roughly 130 feet.

When they reach a horizon that appears to be gem-bearing, they then radially extend horizontal tunnels of similar dimensions into the host rock. Multiple shafts and adits eventually form a network of interconnected mining tunnels, not unlike ant colonies.

However, these are only just large enough for a single person to pass though at any given time. If they chance upon a gem-bearing vein lodged between tougher horizons, they only excavate the vein and try to leave the host untouched. 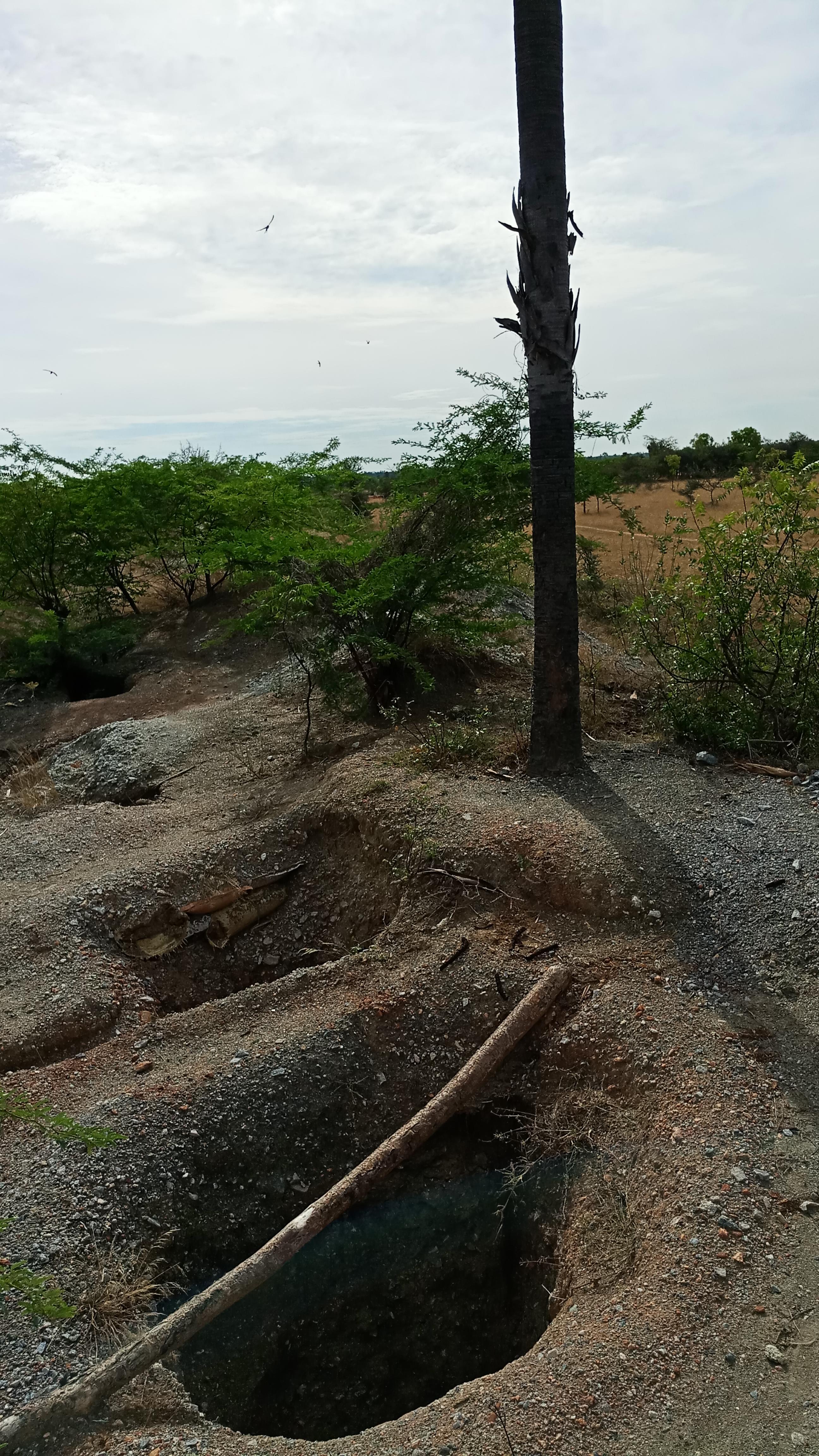 Iolite is a magnesium aluminum silicate, chemically represented as Mg2Al4Si5O18. Iolite is usually found in metamorphic rocks, which are assumed to be formed from the high pressure and temperature alteration of rocks composed of aluminosilicates such as clays, along with an abundance of magnesium rich sediments.

In Tamil Nadu, iolite is found in schists, granulites, and in some cases, even weathered gneisses. They occur along with minerals such as feldspar, sillimanite, biotite, phlogopite, quartz, haematite, diopside, actinolite, etc. which form the matrix of the host rock. Although gem-quality, these iolites do not show proper crystal faces, thus, they are said to have an annhedral habit. 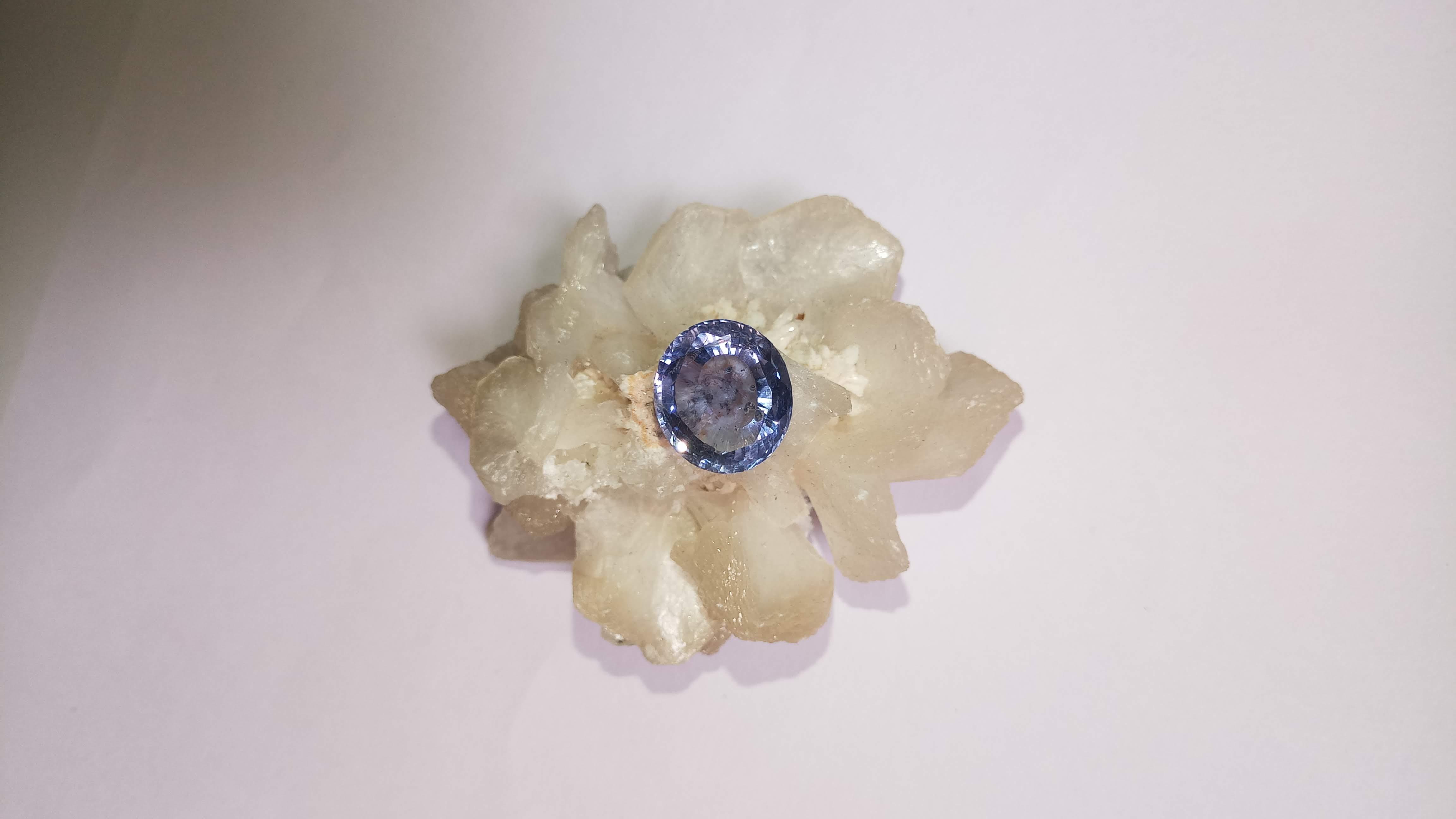 Tamil Nadu’s reserves being vast, naturally a variation in gem size and quality should be expected. However, a drastic change in size, colour, and overall quality is observed in iolites obtained from across this region. Even accounting for pleochroism, there are iolites found that exhibit colours ranging from pale, washed out blues and violets to deep inky blues that verge on black.

These stones may be so densely included that they almost appear opaque; alternatively, they may be nearly free of inclusions.

The rare and beautiful bloodshot iolites are also found in Tamil Nadu. They are characterized by an abundance of hexagonal shaped haematite platelet inclusions.

Each platelet behaves as a tiny mirror that reflects light in various directions when randomly oriented. Unlike sunstones, each haematite platelet in a bloodshot iolite reflects a different colour, giving rise to a colourful spangled effect, resembling a colourful glitter confetti. 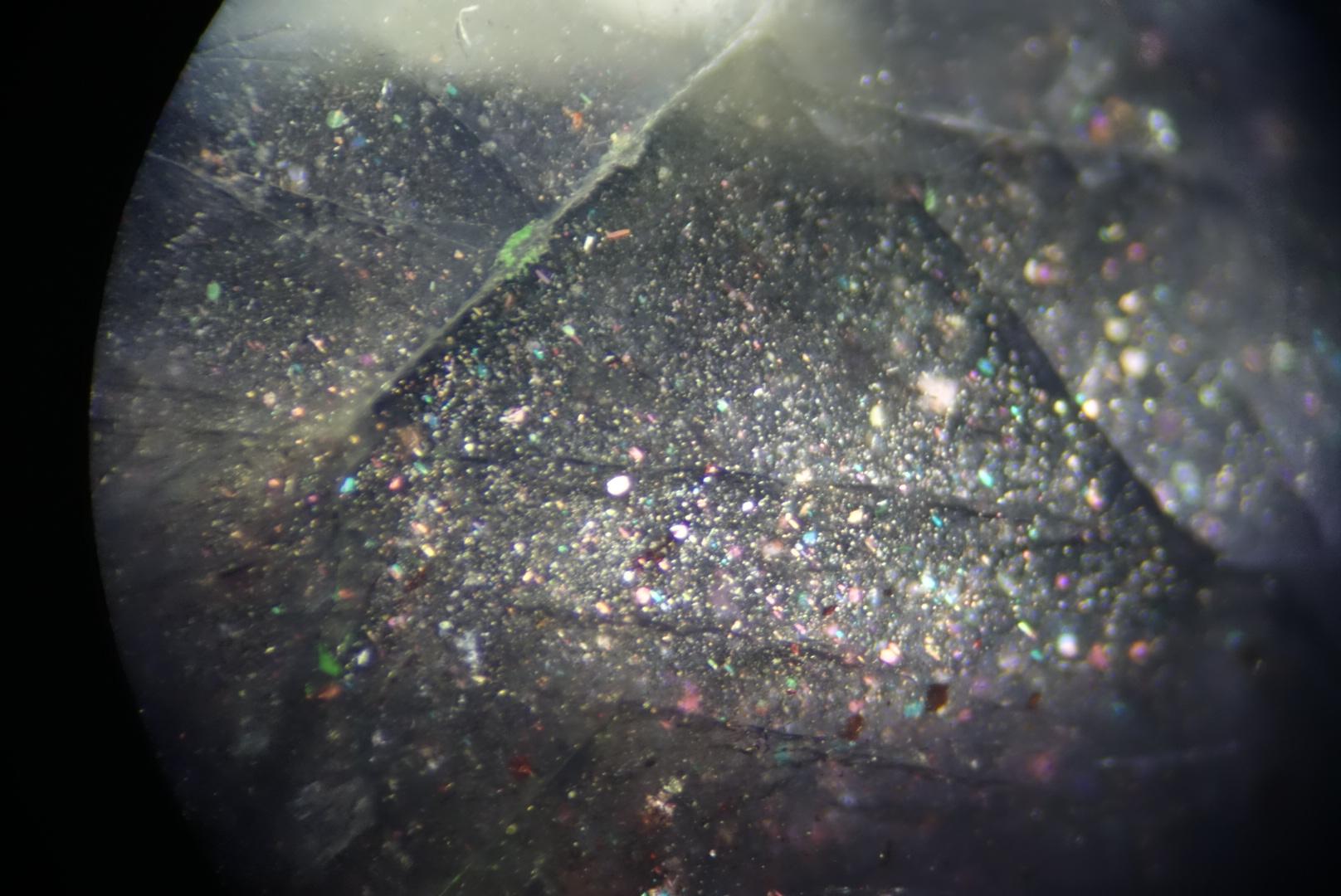 Even more incredible is the display of chatoyancy and asterism in some of these stones. They may show a faint but clearly visible cat's-eye or star caused by the reflection of light off these haematite inclusions. 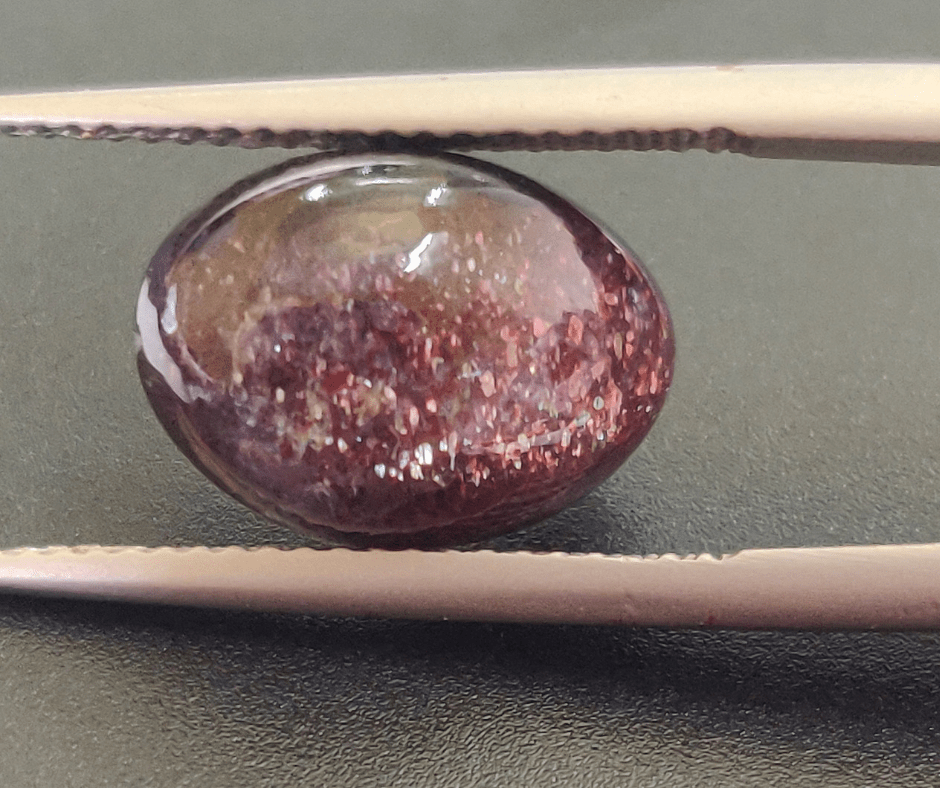 An extensive variety of other minerals are also found as inclusions within these iolites. Sillimanite may be seen as long, thin needles which could be oriented in a particular direction, or be randomly dispersed throughout the gem body. Rhombohedral inclusions of calcite are also sometimes observed. Diopside may occur as perfect euhedral dark green to black inclusions.

Olive green mineral inclusions from the amphibole group may also be found with a perfectly preserved prismatic habit and deep grooves or striations on their prismatic faces. Well-formed or euhedral inclusions of orange spessartine garnet, or rods of apatite may also occur in the iolites from Tamil Nadu. 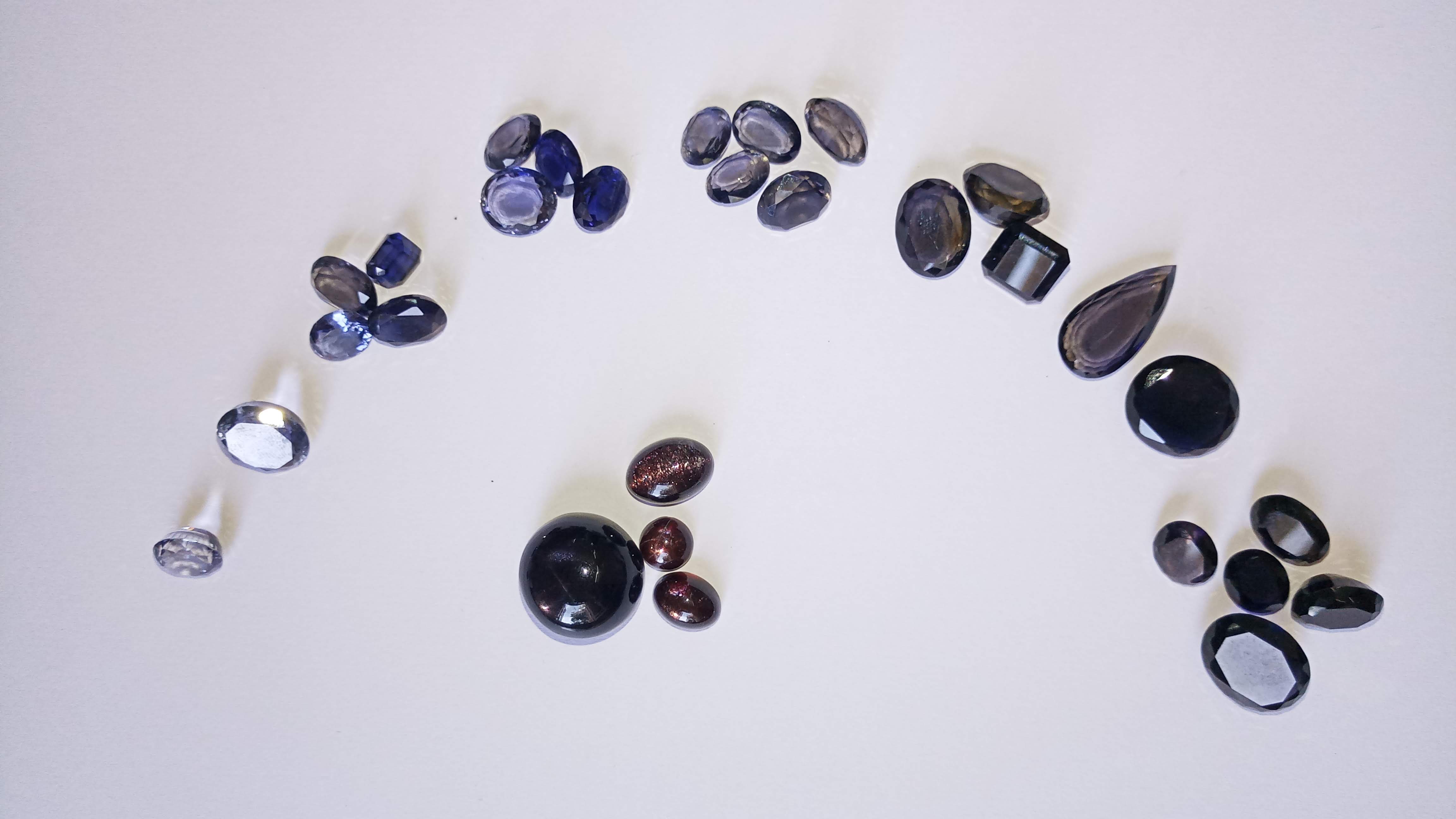 Iolites are fascinating gemstones. The wide range of optical effects that they are capable of displaying is truly captivating – from their unique, visible pleochroism, to the range of shades they can exhibit.

From their sparkly spangled appearance to displaying chatoyancy and asterism, these eccentric gemstones never fail to put on a spectacular display of optical effects. They are incredibly versatile and, in any of their many forms, are certainly a sight to behold.

Cover image: rough iolite specimens. All images are author's own. A bibliography and references are available on request.

Tagged under
More in this category: « Exploring the Varieties of Quartz Why Are Some Gemstones Associated with Bad Luck? »
Tweet
Become a Gem-A Member
Apply to become a Gem-A Member
Subscribe to our Newsletter
Keep updated with Gem-A
Sign Up
Get in Touch
Can't find what you're looking for?
Contact Us