Within the garnet group of minerals there are six species that can produce gem-quality stones. Here, Gem-A Gemmology Tutor Pat Daly FGA, explores the essential types of garnet and shares some important information to help your gemstone and/or jewellery buying decisions…

The garnets are a group of minerals, some of which are so beautiful that they are valued as gemstones. Most are admired for their body colours, but fire, iridescence and transparency add charm to those which possess these features. The commonest colour for garnets is red, and so many people assume that they all have this colour. Almost any colour is possible except a pure blue, however, and some garnets change their colours depending on the type of light in which they are viewed.

The Composition of Garnets

There are six species of garnet that may provide gem-quality stones. All are aluminium or calcium silicates. That is to say, their chemical compositions are dominated by the elements silicon, oxygen, aluminium and calcium, which may be joined by metals, such as chromium, iron, magnesium or manganese, and other colour-causing elements such as vanadium. 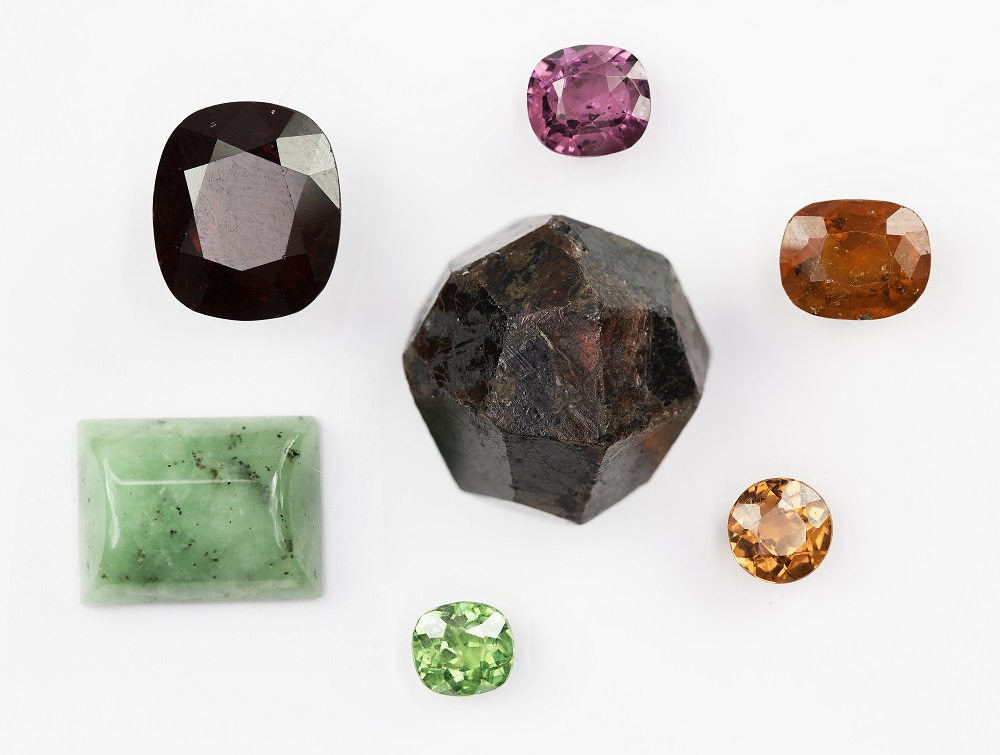 A group of garnet gemstones, including rough and faceted material from the Gem-A Archives.

Garnets form compact, sometimes rather rounded-looking crystals, which belong to the cubic crystal system (one of seven major groups into which crystals are divided). Well-formed garnet crystals are attractive and may be prized items in mineral collections. Garnets grow in response to changes to the pressures, temperatures and chemistry of rocks that are caught up in mountain building. This has occurred in many parts of the world at many different times during Earth’s history. Accordingly, garnets are very widely distributed, although gem quality stones of all kinds are rare.

There are two main groups of gem garnets, including six gem species, which are subdivided into several varieties which are distinguished mostly by their appearance.

One group includes aluminium silicates of which the three species are pyrope, in which magnesium is also present, almandine, which contains iron, and spessartine, which incorporates manganese. All three graduate in chemistry and properties from one to another, and intermediates between them are often seen in the jewellery trade.

Pyrope and almandine are red to purplish-pink and purple, with fine quality stones having vivid colours combined with a high degree of transparency. Prettily coloured stones which are intermediate between them are called rhodolite. All of them may incorporate oriented needle-like inclusions which, in some almandine, are numerous enough to cause star effects, with four or six rays, on cabochon cut stones (those with smoothly rounded, polished tops). 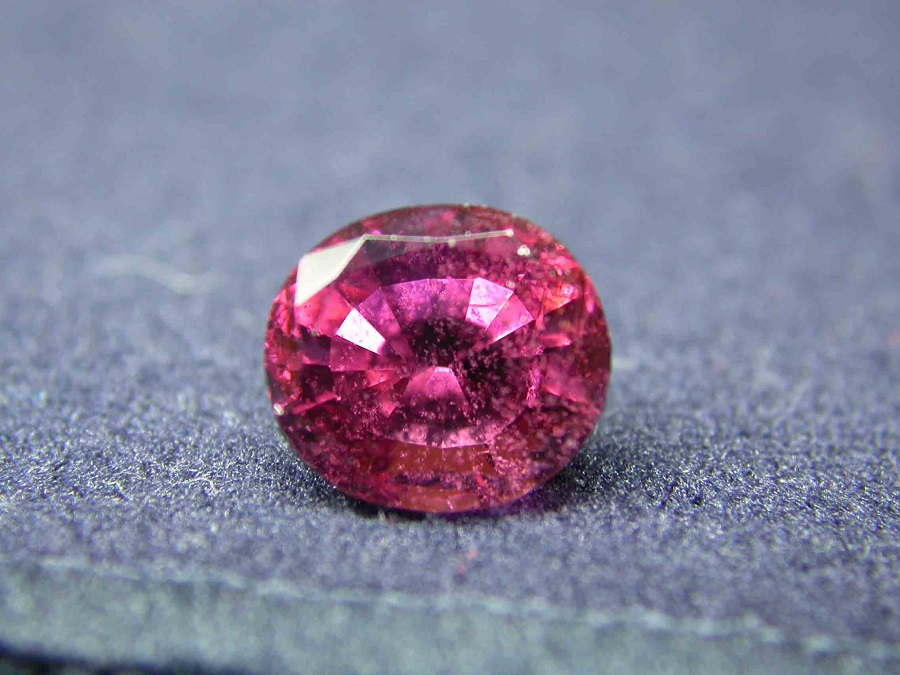 Red pyrope may be coloured partly by chromium, an element which produces bright greens and reds in gemstones. These stones are uncommon because they are only found in rocks which formed deep within Earth and are rarely seen at the surface. In the deserts of Arizona, where these rocks do occur but are hidden beneath the soil, prospectors look around ants’ nests. When they encounter the large garnet crystals, if they are not too big to move, the animals carry them to the surface and eject them from their nests. These stones, some of which are large enough to be cut and polished, are called anthill garnets.

Spessartine, at its best, is a brilliant orange coloured transparent stone which is known in the trade as mandarin garnet. Intermediates between spessartine and almandine have a reddish component to the colour, which becomes more pronounced as they approach the composition of almandine. 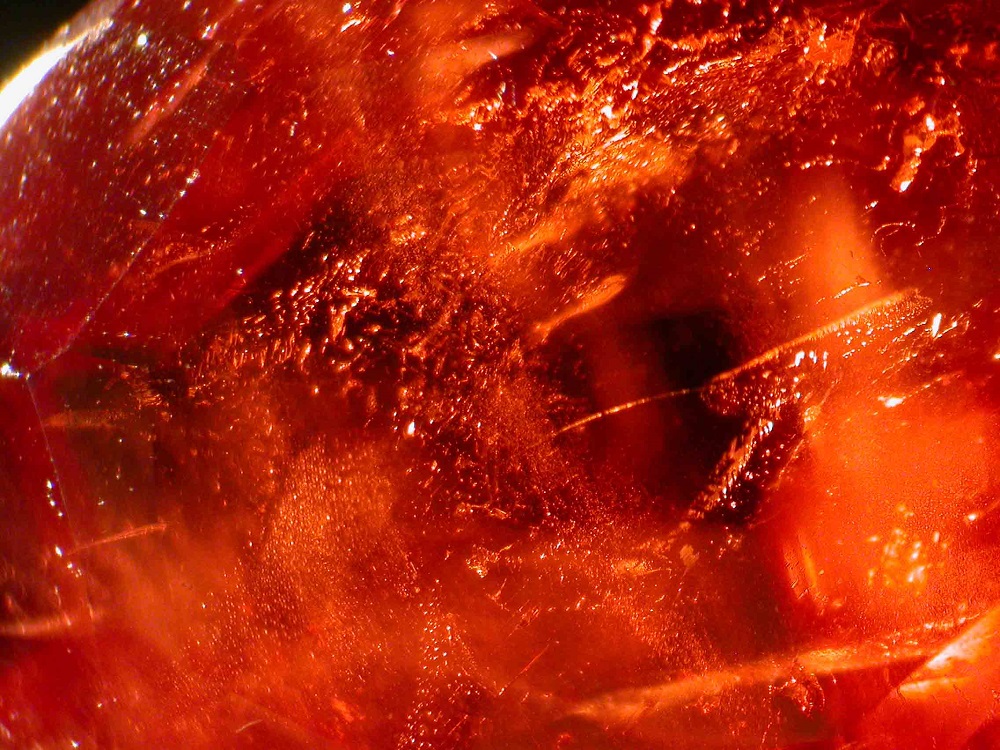 Intermediates between pyrope and spessartine may be pinkish to orange, belonging to the variety malaya garnet, whose name is based on its colour, not its place of origin (East Africa) or they may look different colours depending on whether they are seen in daylight or incandescent light (light produced by a candle, or a torch bulb with a wire filament).

The second group of garnets are silicates of calcium, and comprise the three species uvarovite, containing chromium, grossular, with aluminium, and andradite, with iron, and there are some Intermediates between these species. 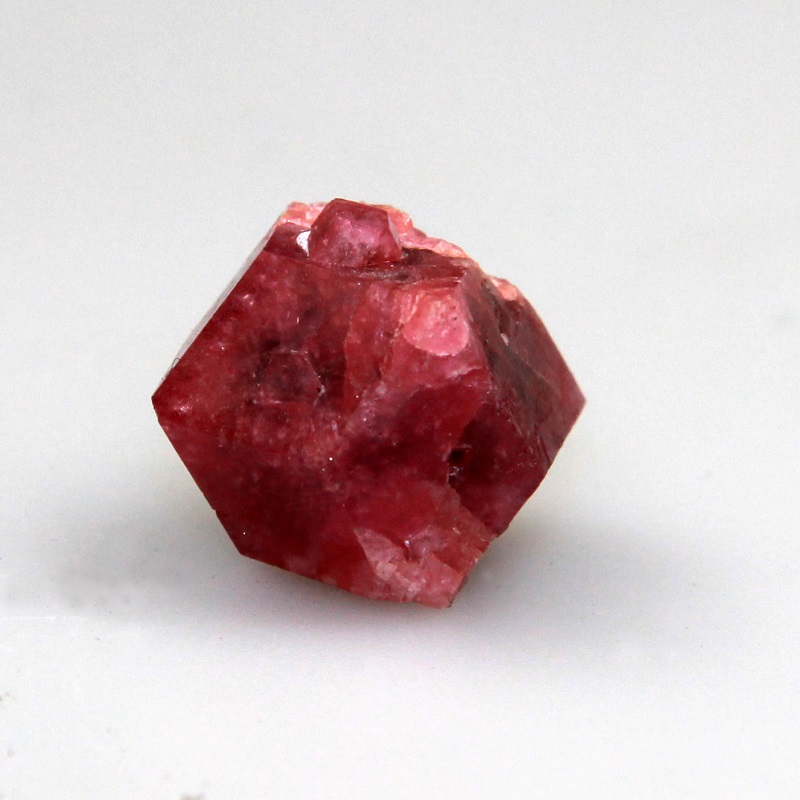 Uvarovite is coloured bright green by chromium but very rarely occurs in gem quality crystals which are large enough to cut. It is very attractive, however, when it forms groups of lustrous crystals one or two mm wide, on a grey rock matrix. These pieces may be shaped and set into contemporary jewellery, without modification, apart from cleaning, of the garnets.

Grossular is white when it is free from significant impurities, and is otherwise yellow to orange, brown and green. The variety which is most often seen in antique and vintage jewellery is the brown to orange one which is called hessonite. This is one of the easiest gemstones to recognize because of its appearance, the many rounded crystal inclusions it contains and its swirly internal appearance. Ranges of white to yellow stones may be graduated in colour, to be set in lines to enhance jewels. The most valuable variety of grossular is tsavorite, which was found in 1967 and named after the Tsavo national park in Kenya. Tsavorite is coloured mainly by the element vanadium and is a very attractive light to intense green. 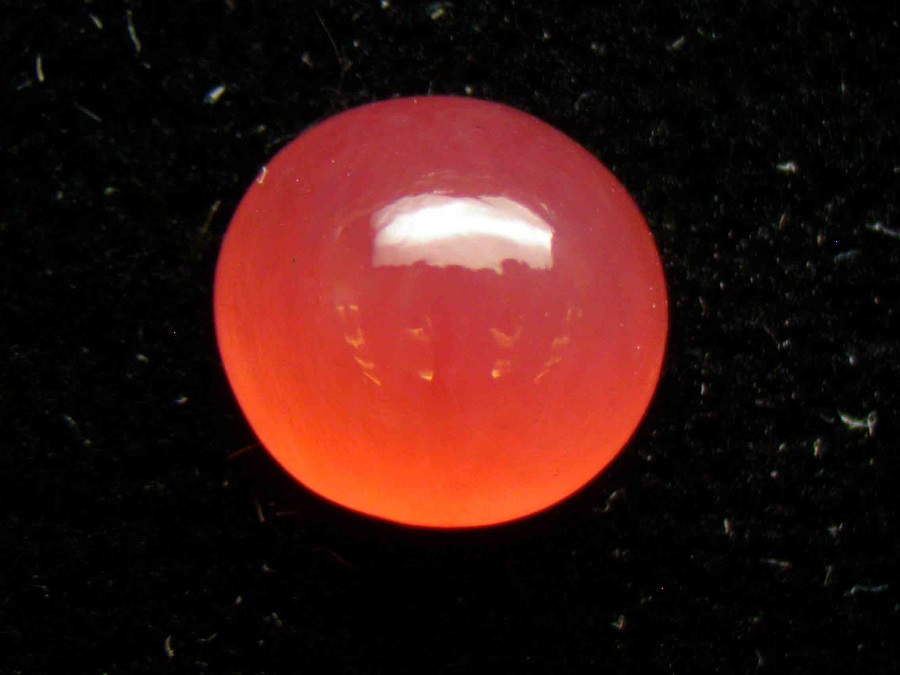 A type of garnet called hydrogrossular is included as a variety of grossular. It forms masses of interlocking, microscopic crystals which makes it a tough material, suitable for carvings, beads and cabochons. It is translucent to opaque and may be bright green to pink and white. Sometimes, all these colours are present and a multicoloured carving can be fashioned from a piece of rough. Hydrogrossular may be used as a substitute for expensive jades.

Mali garnet, named after the African country, is a grossular which contains some iron, and is intermediate between that species and andradite. It resembles andradite in its lustre and green to yellow colour but may be distinguished from it with standard gemmological instruments. 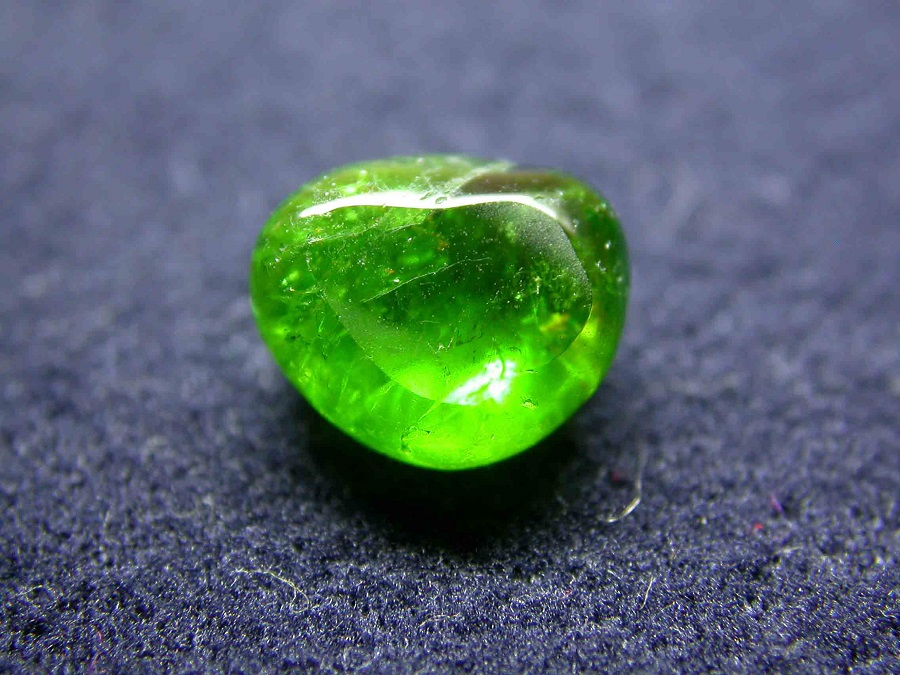 Andradite of gem quality which is seen in jewellery is almost always the bright green variety demantoid. This was found in Russia in about 1850 and is the only kind of green garnet that was used in antique jewellery. As well as its bright colour, caused in part by chromium, it shows good fire, in which property it excels diamond. The name demantoid means “like diamond” and was given because of the high degree of brilliance and fire shown by the garnet. Its resemblance to diamond is noticed especially when well-cut, small stones shine brightly from their jewellery settings. Good quality, well-cut demantoid is another expensive variety of garnet. 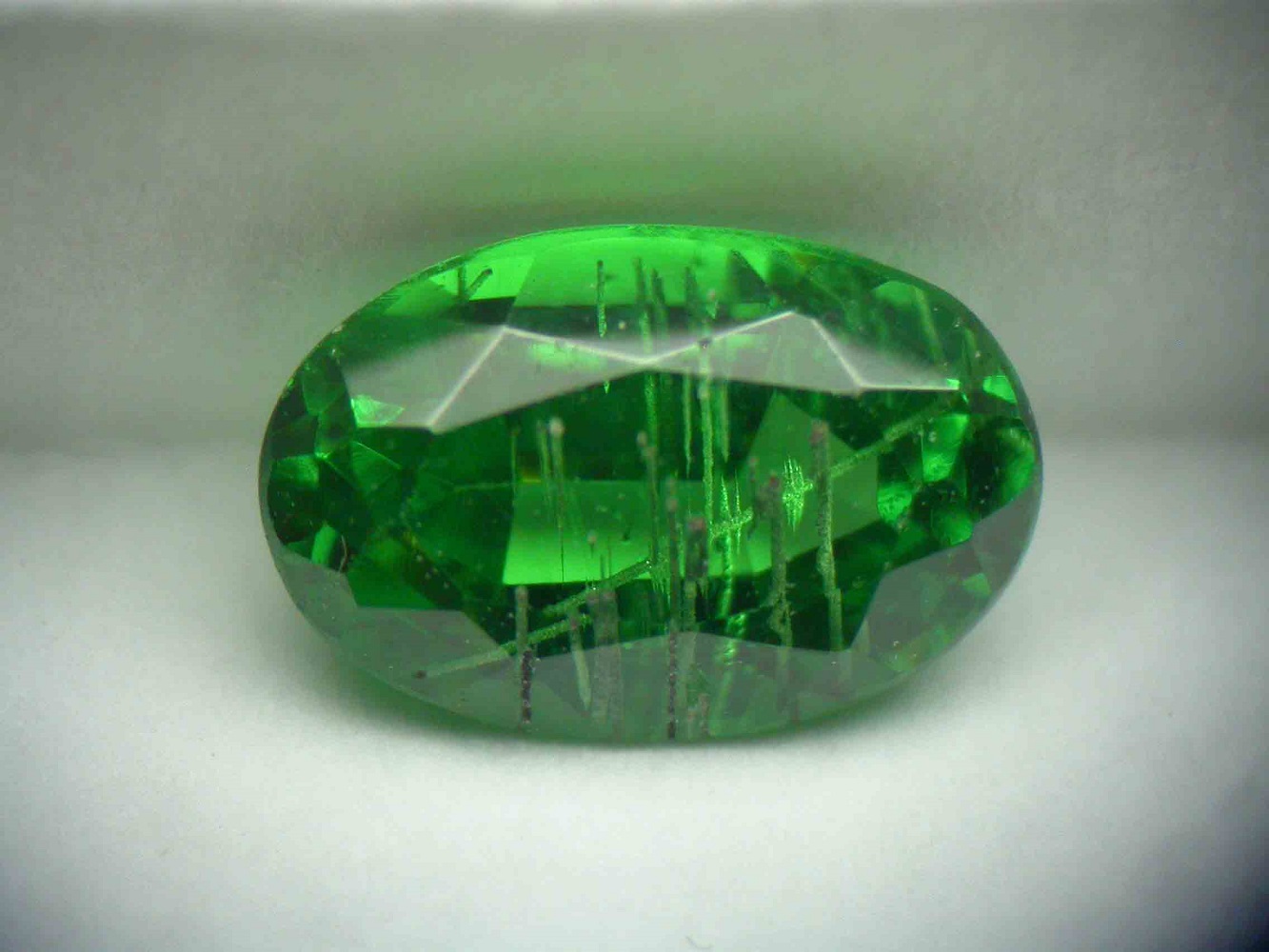 Small numbers of yellow andradite, belonging to the variety topazolite are sometimes seen but are rarities even in the gem trade. Rainbow garnet is andradite, with an uninspiring green to yellow body colour but an iridescence which may be very bright. The two sources for these stones are Mexico and Japan. Melanite is a black, opaque variety of andradite which has occasionally been cut and polished. Neither rainbow garnet nor melanite are seen very often, although both are well known to gemmologists and collectors.

Gem quality garnets are available in almost all colours, they may be highly transparent, and they can display a range of interesting optical effects. They have brightly reflecting surfaces and, for the most part, they are hard and tough and are not known to fade or discolour in normal use. Andradite is an exception and care is needed since it is known to be relatively easy to scratch and break. Even the more durable garnets should never be treated carelessly because they may have a substantial value and, like all gemstones, may be damaged by inconsiderate handling.

The values of different garnets ranges, from inexpensive stones which can be worn in everyday jewellery, to rare and costly gems which are suitable for jewels of the highest quality.

Start your gemmology journey with our beginner’s level, online-only gemmology qualification, GemIntro, which allows you to study at your own pace over six months.

More in this category: « Buying Guide: What Are Hardstones? Understanding and Testing for Rare Natural Citrine »
Tweet
Become a Gem-A Member
Apply to become a Gem-A Member
Subscribe to our Newsletter
Keep updated with Gem-A
Sign Up
Get in Touch
Can't find what you're looking for?
Contact Us