Varieties of tourmaline from the Gem-A Archives.

Tourmaline is a mineral group that includes more than a dozen species. A few of them can be fashioned into gem-quality faceted stones that are perfect for use in fine and high jewellery collections. Here, Gem-A Gemmology Tutor, Pat Daly, delves into the rainbow world of tourmaline gemstones and explains the types you should be aware of when making purchasing decisions.

To the jewellery trade, tourmaline is a gem species defined by its chemistry and atomic structure, divided into several varieties that are recognised by their distinctive appearances. Tourmaline can be any colour, it can have multiple colours in different parts of the same stone, and it may display cat’s-eye and colour change effects.

Mineralogists consider tourmaline to be a mineral group that includes more than a dozen species, which are separated by differences in chemistry. However, a few of them contribute gem-quality stones, and these are the ones that are of most interest to gemmologists and jewellers. 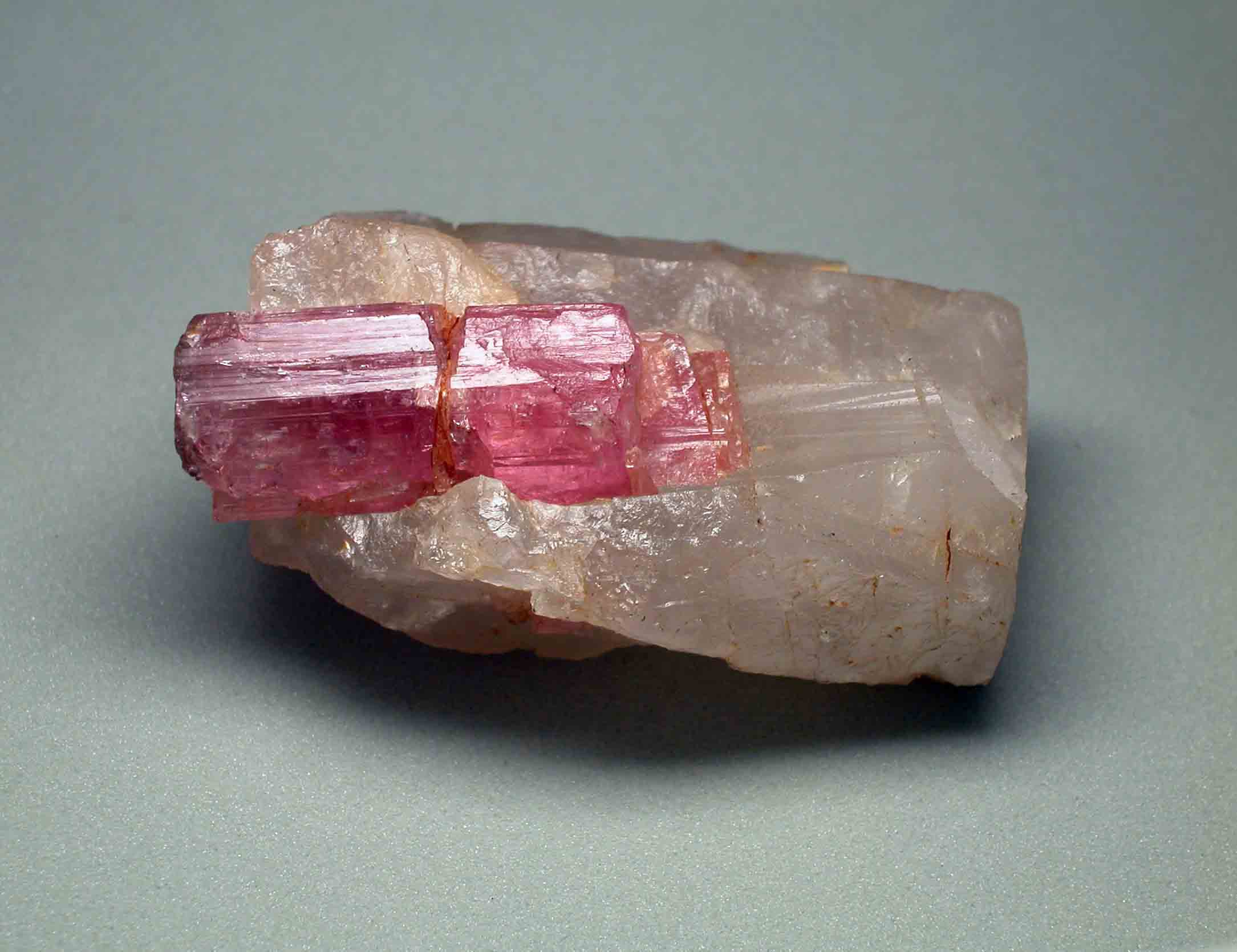 Tourmaline crystal in matrix from the Gem-A Archives.

They are aluminium silicates containing boron, hydrogen and/or fluorine, plus complex mixtures of other elements in their atomic structures, such as sodium, lithium, calcium, magnesium, manganese, copper, iron, chromium, and vanadium, which result in a range of colours.

Species of most significance are those which contain sodium as well as the elements listed above.

Substitution of calcium for sodium produces uvite, and stones intermediate between this species and dravite may be brown to attractive yellow and green colours. Substitution of lithium for some magnesium defines liddicoatite, a rare species which may be of any colour and is often spectacularly colour zoned.

These chemical differences are hard or impossible for the ordinary gemmologist to prove, so trade descriptions of tourmaline are based on appearance. The following varieties are recognised…

Rubellite is red. Pink stones are not included in the term, but the boundary between this colour and red may be disputed. 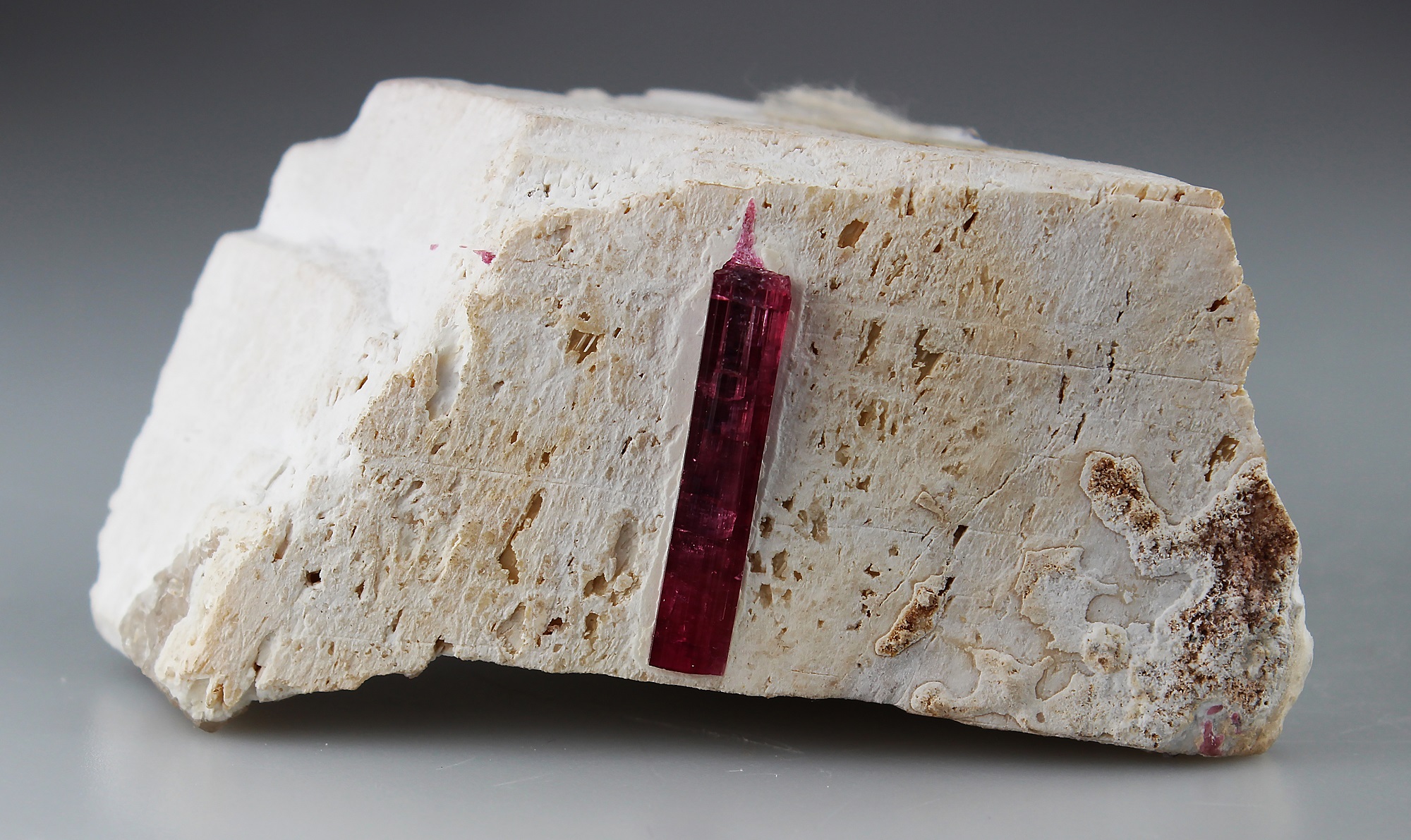 Rubellite tourmaline from the Gem-A Collection, photographed by Henry Mesa.

Verdelite is used for green stones that are coloured by iron.

Indicolite is used for blue and some greenish blue tourmalines; again, the limits of the term are not always clear.

Chrome tourmaline is green, the cause of colour being chromium and/or vanadium. The latter element may be the major contributor to the colour. These stones look pink to red through the Chelsea colour filter, whereas stones coloured by iron do not.

Some chrome tourmalines display a colour change. This term usually signifies a colour difference when a stone is moved from daylight into incandescent light, such as candlelight. Alexandrite, for example, is famous for its change from green to red when this is done. The effect seen in tourmaline is more complicated. There is a tendency for red to be seen more easily in incandescent light and green in daylight, but the colour change depends mostly on the thickness of the stone. Thin stones look green when light is shone through them; orange and then red are seen as thickness increases. The thickness required depends on the intensity of colour, but about 15mm is enough to cause many stones to look red. 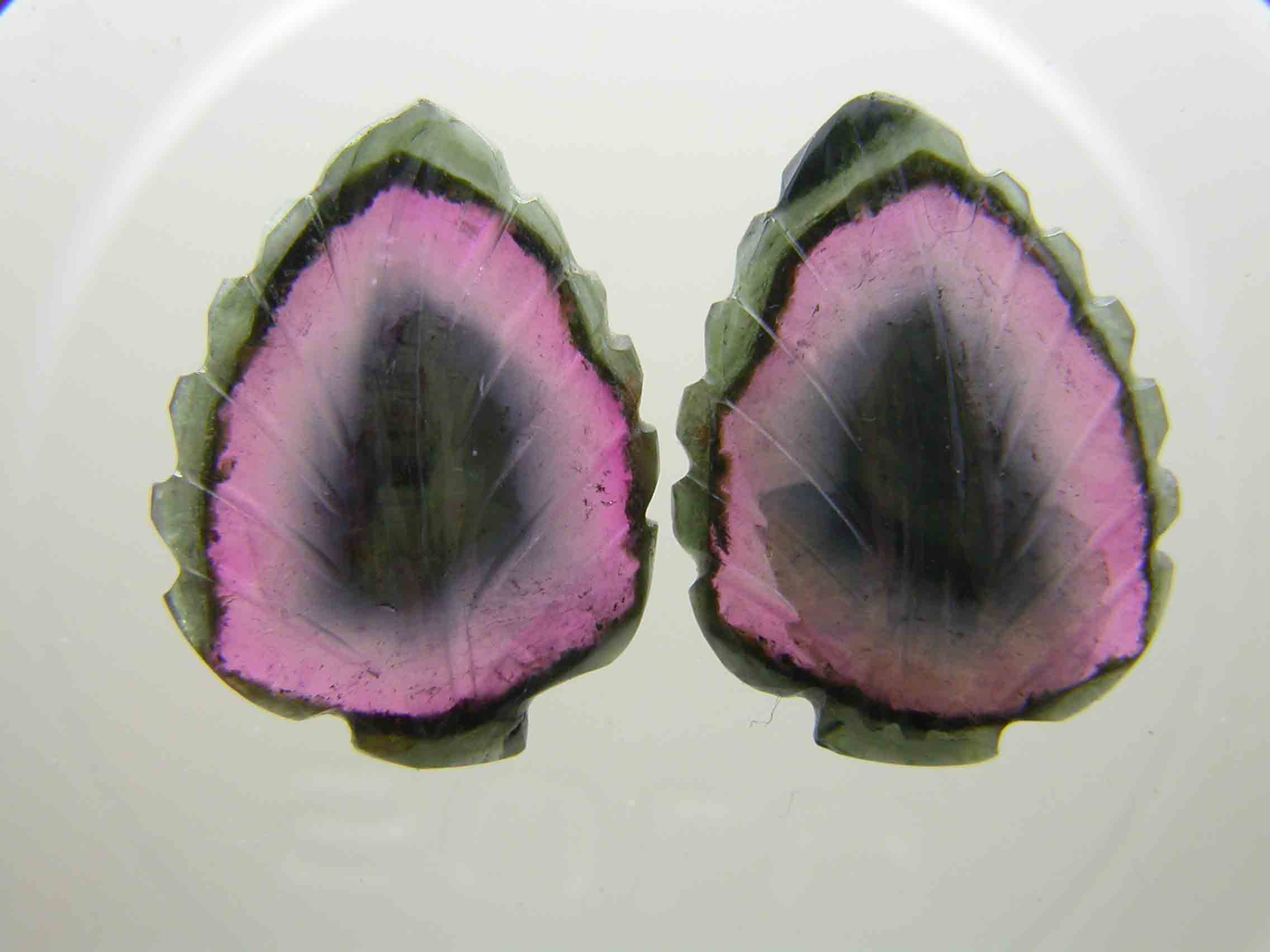 Colour zoning is a common feature of tourmaline. Some crystals are zoned concentrically from their centres to their surfaces so that the inner parts of polished cross sections have different colours from the outer parts. When a green border surrounds a pink core, the stones are called watermelon tourmalines, but this term has sometimes been extended to other colour combinations.

Parti-coloured tourmaline is any stone in which this kind of colour variation occurs, but it also refers to stones that have different colours along their lengths. In this case, the end of a crystal is one colour, while the base is another. 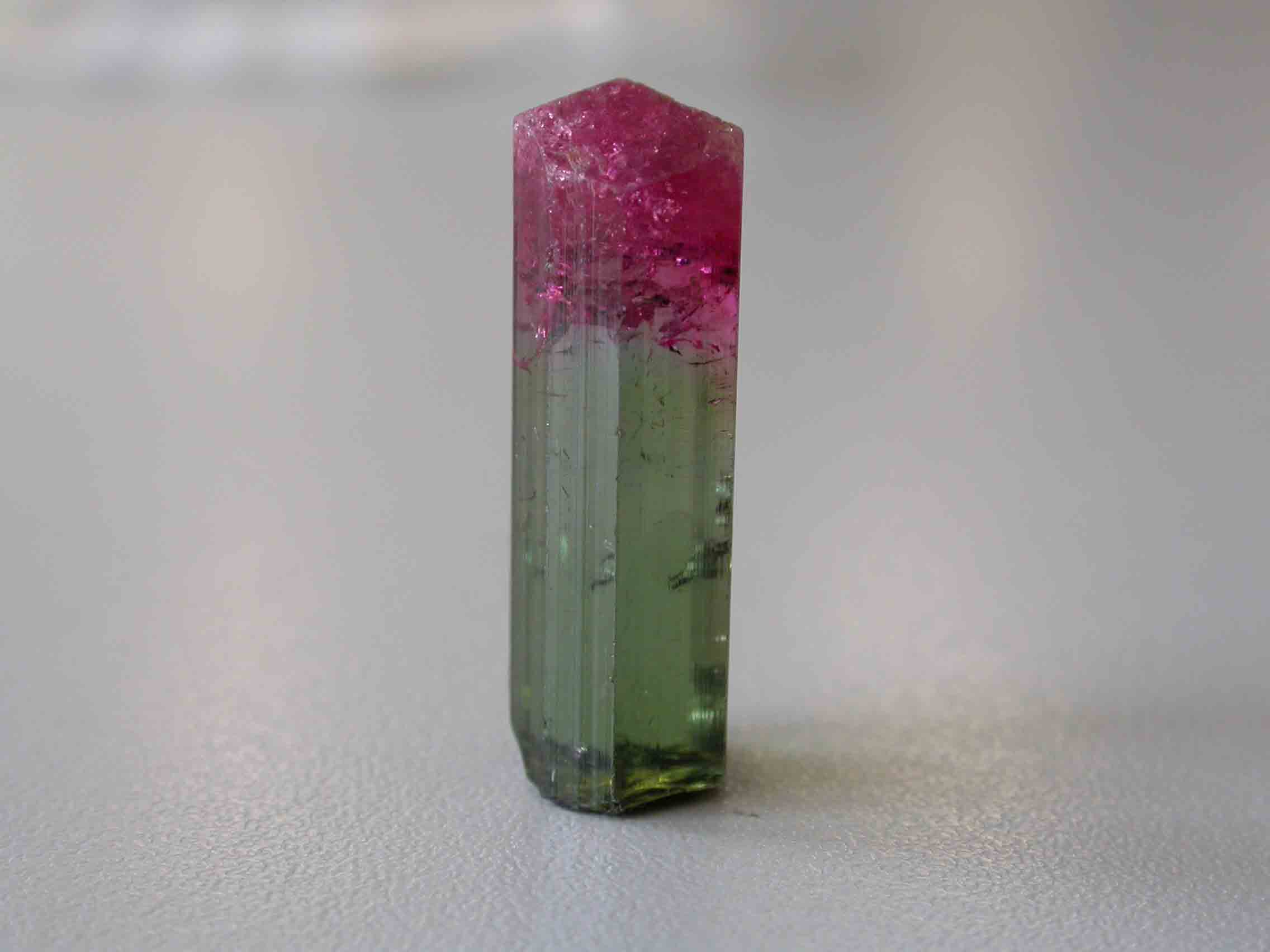 Any combination of colours is possible, and there may be many colour zones in a crystal, but most stones are pink and green, or pink, white and green. The variation occurs because the chemical elements which cause the colours vary in concentration at different times during the growth of the crystals. Fashioned stones which incorporate two or more colours are very desirable, their value rising as they become more intense and vivid and when they are evenly distributed and sharply bounded.

Tourmaline crystals usually grow in a coarse-grained igneous rock, a pegmatite, in which they may project into vacant spaces, enabling them to grow as well-shaped crystals and crystal groups. Even when they are not of gem quality, they may still have considerable value as collectable and ornamental pieces, and large coarse crystals may be sliced and polished for the same reason if they show interesting colour variations. 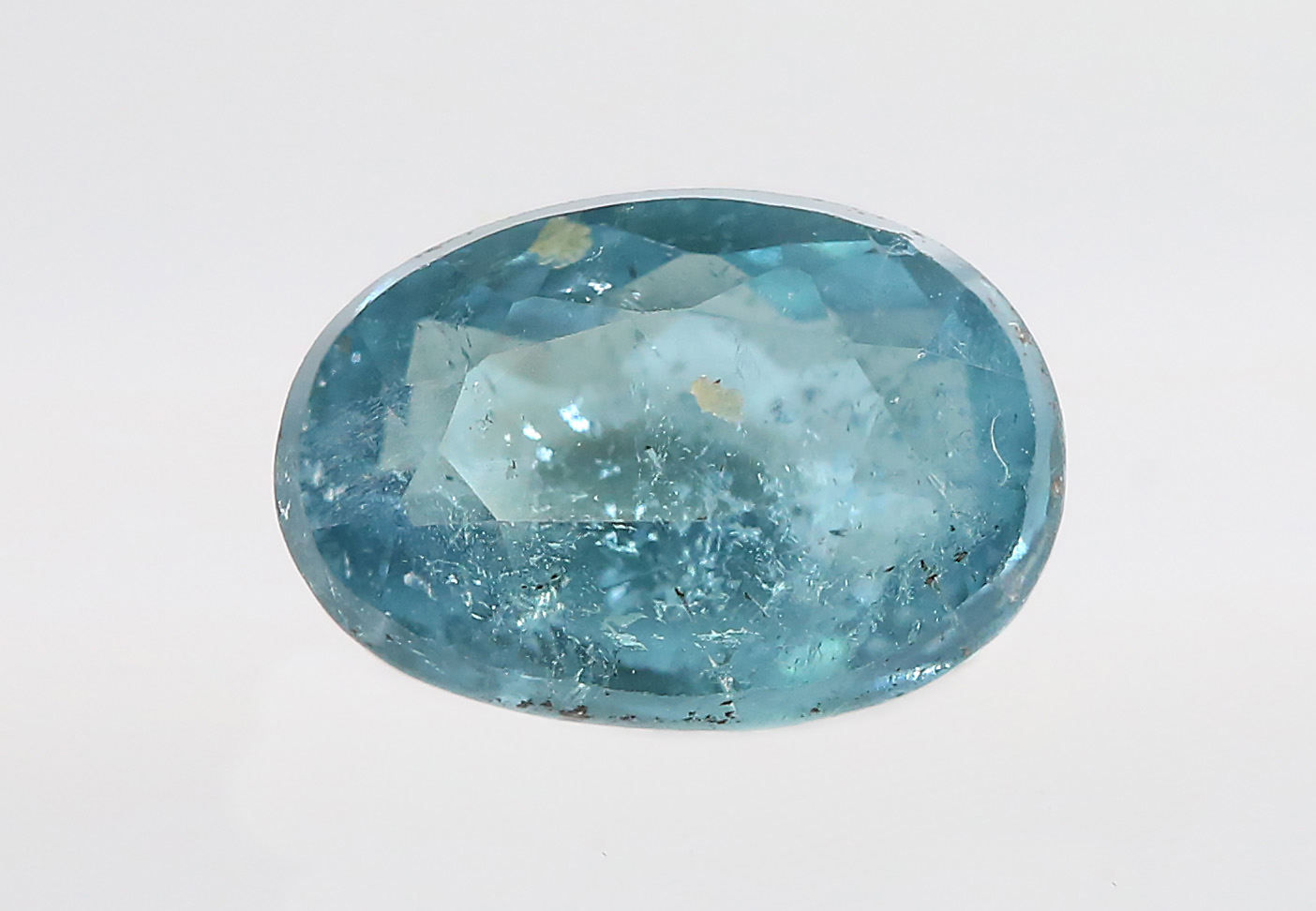 A blue variety of tourmaline photographed by Henry Mesa.

Paraiba tourmaline is one of the most recent additions to the range of varieties of this gemstone. These vividly coloured blue to green stones have captured the imagination of buyers around the world since their discovery in about 1989. Their value is many times higher than that of other tourmaline varieties of comparable quality and may reach many thousands of dollars per carat. The first stones were mined in Brazil, but similar ones have since been found in Mozambique and Nigeria. They are coloured by copper with some modification by manganese. All stones of this type may be called Paraiba tourmaline, but a premium may be charged for those which can be proved to have originated in Brazil.

As well as colour and its variation, the optical effect known as chatoyancy is seen in some tourmaline. This cat’s-eye effect consists of a line of reflected white light across the surface of a stone which has been polished with a domed surface. It is caused by reflection from numerous parallel long and thin inclusions. In tourmaline, they are tube-like and parallel with the long direction of the crystals. Cat’s-eye tourmaline may be any colour, but most are blue to green or pink. 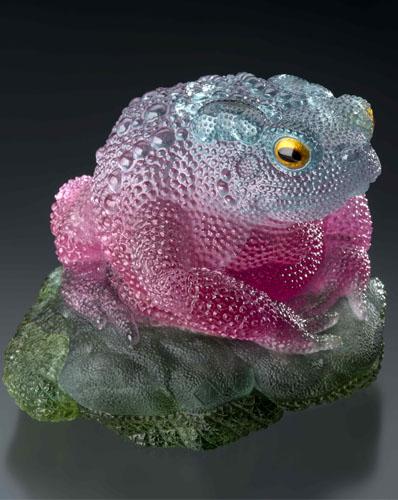 Tourmaline is one of the most beautiful gemstones, which may be of any colour, and which shows several interesting features. Stones do not have to be of fine gem quality to be appreciated. Heavily included stones may be cut as cabochons; crystal groups and slices can be fascinating objects, and even apparently shapeless lumps may inspire carvers to bring out extraordinary hidden beauties. The toad carving by Patrick Dreher (pictured above) is a fantastic and mind-blowing example!

Main image: Varieties of tourmaline from the Gem-A Archives.

More in this category: « Understanding and Testing for Rare Natural Citrine Beginner’s Guide: Everyday Gemstone Identification in the Field  »
Tweet
Become a Gem-A Member
Apply to become a Gem-A Member
Subscribe to our Newsletter
Keep updated with Gem-A
Sign Up
Get in Touch
Can't find what you're looking for?
Contact Us