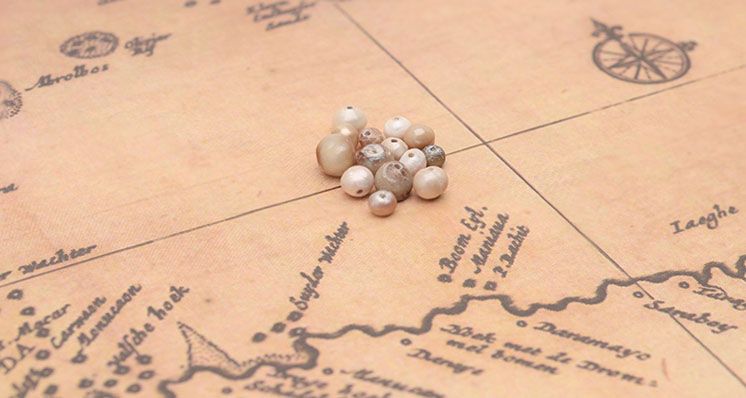 Pearls are one of nature’s most precious possessions. Iconic, unique and beautiful, these organic gems have captivated jewellery connoisseurs for centuries all over the world. Pearls and pearl jewellery have played an important role in the social, cultural and fashionable changes within our society.

Since the late 1940s, traditional radiocarbon methods for determining the age of an object have made a significant impact on archaeology, anthropology, science and art.

Dr. Michael S. Krzemnicki, director of SSEF, announced “we are honoured to be able to offer this new service to the international pearl trade. It is an opportunity to document the provenance of unique and iconic natural pearls as well as further protecting the natural pearl trade”.

For radiocarbon dating to be possible, the object must have contained organic material. Combined with the technical excellence of scientists, this highly sophisticated method involves measuring the ratio of radioactive carbon to the normal carbon in the nacre. This results in an accurate date of the pearl. However, with all scientific testing there may be minor limitations due to the age of the sample and sampling size.

Discovering the age and origin of pearls is now becoming more meaningful for the pearl and jewellery trade, for both old natural pearls and modern cultured pearls.

This will be a dependable and invaluable tool to help discover details about natural and cultured pearls (and pearl jewellery) and our historical past that would otherwise have been left uncovered.

Since the late 1940s, traditional radiocarbon methods for determining the age of an object have made a significant impact on archaeology, anthropology, science and art.

The introduction of cultured pearls at the beginning of the twentieth century made natural pearls and pearl jewellery highly prized and highly sought after. As a result, pearls have become target gems for fraud and forgery. Additionally, as cultivation techniques have become more sophisticated, and pearls are produced in larger quantities, we need to be even more vigilant. Age dating will always be a challenge, but now this service serves to protect the industry from such attempts to deceive a buyer.

Commenting on the value of radiocarbon dating as a service, leading jewellery historian Beatriz Chadour-Sampson notes: “It is an amazing breakthrough, to have found a method of dating pearls. On historic jewels pearls have often been replaced, and a date could indicate when a jewel was adapted. With pearl necklaces this information would be fundamental, without jewelled components it is impossible to assess how long these have been handed down within a family. The scientific method of dating pearls is exciting news and will undoubtedly be a great asset to the jewellery historian, collector or dealer.”

This is a huge step forward that allows us to strengthen and protect the future of the global pearl industry. Furthermore, it can be applied consistently throughout the world and consistency in science is everything. It goes without saying that we need to make the most of this service. The development is not only significant for the pearl industry, but for all of history. Now, we can rightly credit the past and contemplate future scientific pearl research and development. ■

Cover image Natural pearls recovered from the Cirebon shipwreck in Indonesia dating back to the tenth century, which were identified using the 14C pearl method developed by SSEF and ETH Zurich. Image courtesy of SSEF.

More in this category: « Proof of Provenance The Journal of Gemmology, Volume 36, No. 2. Is Here! »
Tweet
Become a Gem-A Member
Apply to become a Gem-A Member
Subscribe to our Newsletter
Keep updated with Gem-A
Sign Up
Get in Touch
Can't find what you're looking for?
Contact Us