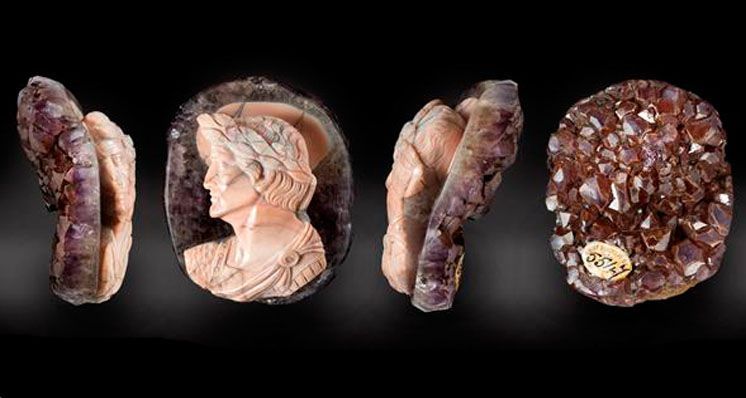 First published in The Journal of Gemmology Vol.35/No.8, Robin Hansen FGA, gem curator at the Natural History Museum, London, takes us through the gemmological, mineralogical and historical background of two fascinating cameos from the late 1800s.

The collections of the Natural History Museum (NHM) in London include minerals, gemstones, worked objects and carvings. I recently had the pleasure to study two chalcedony/agate cameos that were fascinating for their gemmological, mineralogical and historical interest. What made both so delightful was that they had been carved onto the exterior of geodes. Both were purchased from gem carver Wilhelm Schmidt by the Geological Museum of the British Geological Survey in the late 1800s; the specimens then became part of the NHM collection in 1985.

Wilhelm Schmidt (1845-1938) was born in Idar (now part of Idar-Oberstein, Germany). At the age of 15 he was sent to Paris as an apprentice to learn the craft of gem engraving, under the masterful eye of cameo cutter Arsène. He was trained in the neo-classical style, but stone cameos were going out of fashion when he graduated in the 1860s.

Although Romanticism brought in new trends of Renaissance subjects for cameos, Schmidt's interest waned and he returned to Germany. Following the Franco-Prussia War in 1870 and subsequent events, Wilhelm moved to England with his brother Louis, where he changed his name to William.

The brothers set up a business in Hatton Garden that ran from 1872 to 1915 (Seidmann, 1988). During this time William regularly sold cameos, intaglios and carvings to the Geological Museum. His work was of interest because he utilised more unusual materials such as labradorite, moonstone and opal. 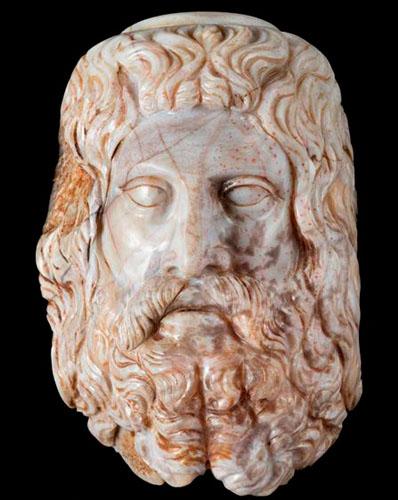 Figure 2. This cameo, also by Wilhelm Schmidt, depicts the head of Jupiter and is carved on the exterior of an agate geode. Specimen BM.1985,M16225; courtesy of NHM London © The Trustees of the Natural History Museum, London.

Of the two cameos documented here, the first specimen is BM.1985,MI5547, described in the museum's handwritten register as 'Cameo in Agate-Jasper on Amethyst' (see cover image). Depicting a Roman man with a wreath on his head, Schmidt carved the layer just beneath the amethyst druse, which consisted of pale orangey pink chalcedony containing fine crisscrossing dark veinlets and a few thin linear arrays of red iron-oxide spots. The layer of chalcedony continues into the background of the carving, giving a halo effect. The amethyst creates a simple dark backdrop, and it is a surprise to most viewers to find the centimetre-sized amethyst crystals on the back-side of the piece.

The terminations of many of the crystals have been ground away, presumably to give the cameo a more even surface. The object measures 78 x 66 x 38mm and was purchased from W. Schmidt on 23 December 1886 for £8. Although no location is given for the source of the raw material, it is likely to have been Rio Grande do Sul in Brazil, well known for its amethyst, agate and jasper, as well as its connections with Idar-Oberstein in the 1800s.

The second cameo, BM.1985,MI6225, is described in the museum's register as 'Head of Jupiter (after the antique) cut on the exterior of a hollow Agate from Oberstein' (Figures 2&3). It is carved as the head of the Roman god Jupiter, with long flowing hair and beard. The agate is very pale purple to light beige and locally contains small, dark, translucent, angular areas. It also has very fine red veinlets and tiny spots with an iron-oxide appearance. 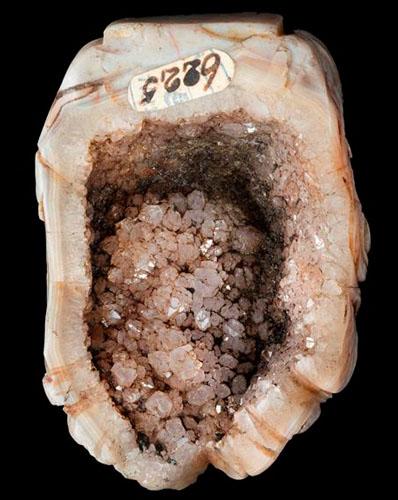 On the rear, a fine layering of the agate can be seen around the edges of a hollow geode lined by a druse of sparkling quartz crystals up to 3mm in size that range from colourless to an ever-so-slight hint of pale amethyst. The carving measures 55 x 38 x 27mm and was purchased by the Geological Museum on 25 March 1891 for £10.

Roman figures were a common theme for Schmidt, and the NHM collection includes other cameos that he carved with the head of Mars, several of Minerva and Julius Caesar and a bust of Britannicus.

To find out more about the collections visit nhm.ac.uk.

Cover image and figure 1: In the late 1800s, Wilhelm Schmidt carved this cameo of a Roman figure into chalcedony adjacent to amethyst crystals that originally formed part of a geode. This composite image shows four sides of the object. Specimen BM.1985,M15547, courtesy of NHM London, © The Trustees of the National History Museum, London.

Tagged under
More in this category: « Challenging Perceptions: Meet the Gem Cutters Thriving in Newcastle Gemstone of Passion: Padparadscha sapphire »
Tweet
Become a Gem-A Member
Apply to become a Gem-A Member
Subscribe to our Newsletter
Keep updated with Gem-A
Sign Up
Get in Touch
Can't find what you're looking for?
Contact Us