Sarah Steele FGA DGA, visits a growing community of gem cutters in Newcastle who are quietly, but effectively, pushing boundaries.

When we think about the great gem centres of the world, Newcastle in the North East of England wouldn't necessarily spring to mind. There is however a growing community of gem cutters who are challenging our perception of the faceting industry, entering and doing extremely well in international competitions, and quietly cutting world class gems for both pleasure and profit.

The NE1 Faceters (a play on words standing for 'Anyone Faceters') was established in 2012 by Steve Smith and Paul Sampson. As members of the UK Faceters Guild, both were keen to pass on their knowledge to a younger generation so Steve, along with Paul a master goldsmith and keen faceter himself, decided to form a group open to promote the art of faceting within the UK. 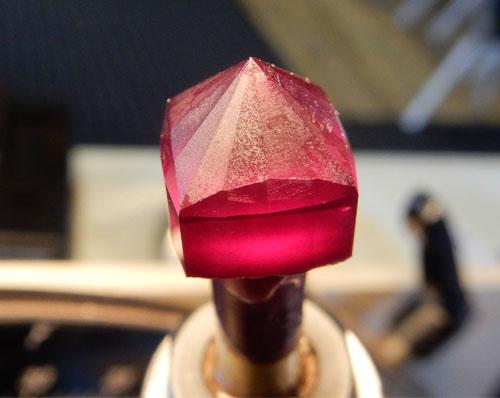 The group is run on a not-for-profit basis but has within its membership a number of professional cutters. The membership has an age range from 11 to 87 from diverse backgrounds, many of them scientists or engineers as well as archaeologists and artists within the ranks. The group meets monthly to broaden their knowledge of gemmology, but they also run annual summer schools where members and visitors spend a weekend cutting together under supervision of Paul and Steve. For the past four summers, I have packed up my faceting machine and joined them for the weekend. As a gemmologist I believe that the best way to truly understand a gem species is to cut it yourself.

In June, I visited the Saint Marie Aux Mines Mineral Show and had purchased a half boule of synthetic Verneuil corundum for a mere €20. I was keen to see if I could cut a large stone at this year's faceting school. I have pre-formed the ruby back in my workshop so it was ready to drop on arrival in Newcastle.

As I cut the girdle of my stone I'm feeling rather smug, the clarity is good and there is no obvious colour zoning. As I move on to the pavilion facets, however, I notice a distinct difference in the feel of the stone on the diamond lap in two cutting plains. The design is an antique cushion square and two sides of the pavilion are beginning to look a different texture to those on the opposing sides. I change to a finer grit lap to begin with pre-polishing but the problem seems to be getting worse. Rather than polishing the problematic facets, chatter marks are appearing in increasing quantity. Steve advises me to touch the stone on the lap in only three spots rather than the fluid arc movement we would normally use. This can often cure this problem as the diamond is now only cutting in three distinctive planes. In the case of this stone however, the problem persisted.

Steve then asked me how I'd aligned the rough on the dopstick. I had assumed that the C-axis on a Verneuil boule was parallel to the longest axis. Rather embarrassingly I was then informed that the C-axis in the Verneuil product always lies within the plane along which the boule is split, though not necessarily parallel to the boule's length, so I'm probably polishing along at least one cleavage direction.

The only hope for this stone is to realign the table at a slight angle, re-dop and recut the pavilion. I decide to leave this for a later date and cut an amethyst aligned at the correct angle previously prepared by Steve. Mine isn't the only setback over the weekend, we have chipped culets, stone knocked off the dop (everyone's worst nightmare), extra facets, missing facets, facets cut on the wrong cog, poor polish, no polish - the list is endless. 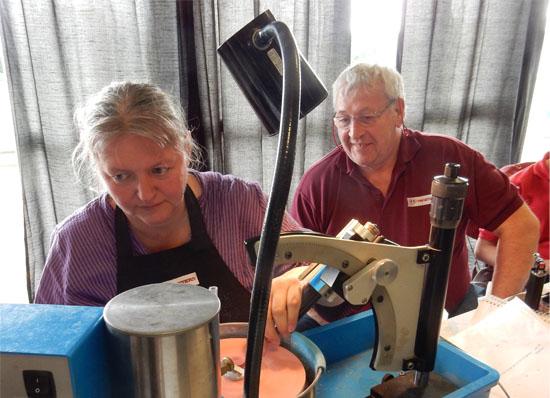 Paul and Steve offer one-to-one tuition over the weekend. Simone Muehlbayer has been allocated to Steve and is an amateur jeweller keen to cut her first stone. By Saturday evening she was very proud of her polished pavilion and girdle. Conversation at Saturday evening's annual barbeque revolves around the problems associated with faceting from a British perspective. Surprisingly, the major problem lies in the acquisition of the faceting machines themselves.

There are over a dozen of us participating over the weekend and no two machines are identical. Five of the machines are the GemMaster11 fac-Ette, a machine considered by many to be the Rolls Royce of faceting rigs. However, this machine has not been in production for many years. I imported my second hand machine from California four years ago which including duty was in excess of £4,000. The rights to the GemMaster 11 machine were purchased by Wyatt Yeager, a diamond prospector and fan of the machine. I spoke to him regarding his plans for future production and he told me that the costs are so prohibitive that he intends to manufacture to order only. A new machine is likely to retail at $6,000 and that is working on a tiny profit margin.

Steve tells me that in his opinion, many of the cheaper faceting machines on the market are simply not good enough quality to cut a stone to the exacting requirements required for competition and high end clients. As a result, many members with engineering expertise heavily modify their own machines, some members choosing to build from scratch. Steve and Paul are seriously considering producing and retailing a British machine but it is difficult to find the precision engineering companies at a cost that would be feasible. In the meantime, Steve and Paul manufacture their own metallic resin and soft type-metal laps which are machined perfectly flat. They also mix their own custom recipe diamond compounds specific to the gem species they are polishing. 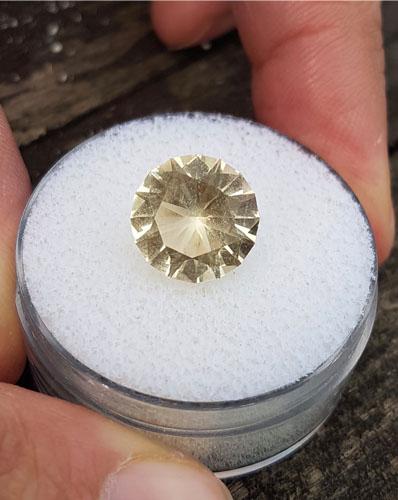 Simone Muehlbayer's brilliant cut citrine, featuring a feather in the girdle duplicated many times when viewed through the table.

By Sunday evening Simone has produced a fantastic brilliant-cut citrine that Steve confirms to be considerably better than a commercial cut stone. Unfortunately, a feather in the pavilion is giving an interesting fingerprint look when viewed through the table but she is rightly proud of her achievement. I don't leave with the 20 ct ruby I'd hoped for but I am happy with my modified emerald-cut amethyst and as usual have learnt a vast amount about cutting.

The NE1 Faceters can be contacted at nei1info@btinternet.com to discuss cutting projects and any unused faceting machines would be gratefully received.

All images courtesy of Sarah Steele.

Tagged under
More in this category: « Discovering Agates on the Shores of Cornwall, England Discover Two Bewitching Cameos at the Natural History Museum, London »
Tweet
Become a Gem-A Member
Apply to become a Gem-A Member
Subscribe to our Newsletter
Keep updated with Gem-A
Sign Up
Get in Touch
Can't find what you're looking for?
Contact Us