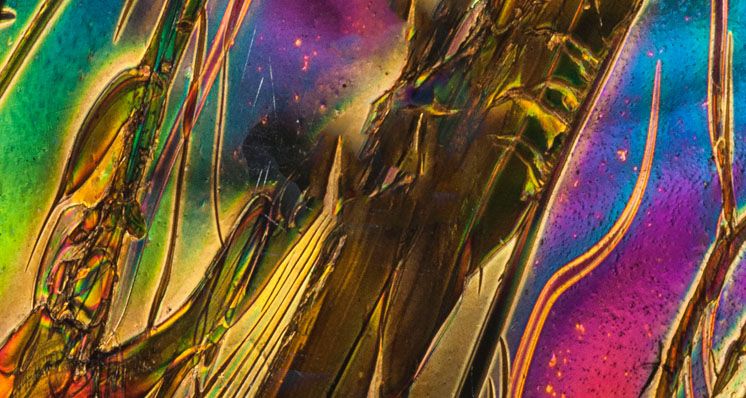 Tom Dodge, a retired geologist living in Arizona, USA has been an avid rock collector for 57 years, a registered professional consulting exploration geologist for 35 years, a skilled flint knapper for 16 years and a budding lapidary for two years.

Here, he takes a look at fire obsidian, an enchanting and little-known material. Collecting and working fire obsidian has truly become his passion and he blames (and sincerely thanks) Emory Coons, the master of this spectacular material for being a generous tutor.

Fire obsidian, a particular variety of iridescent obsidian found in the northwest USA, displays various brilliant colours and patterns. When carefully worked by the lapidary, exquisite gems can be produced that in the author’s opinion, are equal to the finest examples of other iridescent gems in ‘play of colour’, brilliance, uniqueness and intrinsic beauty. To date this location is the only occurrence of fire obsidian known.

Iridescent gems and minerals have held a special fascination for man throughout history. Many early attempts were made to describe both the cause of the iridescence and the metaphysical properties believed to be associated with them.

Read more: What are the different types of opal?

In ancient times precious opal was considered a stone of great benefit to the eyes and was worn to cure ocular ailments, as well as to render the carrier of the stone invisible to the eyes of others (Braid, 2015). Fire opal was admired as a symbol of fervent love in ancient times among the peoples of India, Persia, Central America and North America.

Read more: How to asses the value of an opal

It was believed that a gem that bubbled over with vivacity to such an extent as the fire opal could have been created only in the waters of paradise (International Coloured Gemstone Association, 2015). The Mayans and Aztecs particularly loved this gemstone and used it in mosaics and for ritualistic purposes. Today rainbow obsidian is believed by some to be particularly powerful in meditation to dissolve shock, fear or barriers.

Optical phenomena are caused by the light-dependent properties of a gem. They are not due to its basic chemical and crystalline structure, rather the interaction of light with certain inclusions or structural features within the gem. Iridescence is the phenomenon seen as a multi-coloured surface effect caused by diffraction. As white light passes through very small openings such as pores or slits it is diffracted and a prism effect causes it to separate into spectral colours. This diffraction creates the rainbow display of fractures, the colours of labradorite, and the ‘play of colour’ of precious opal. 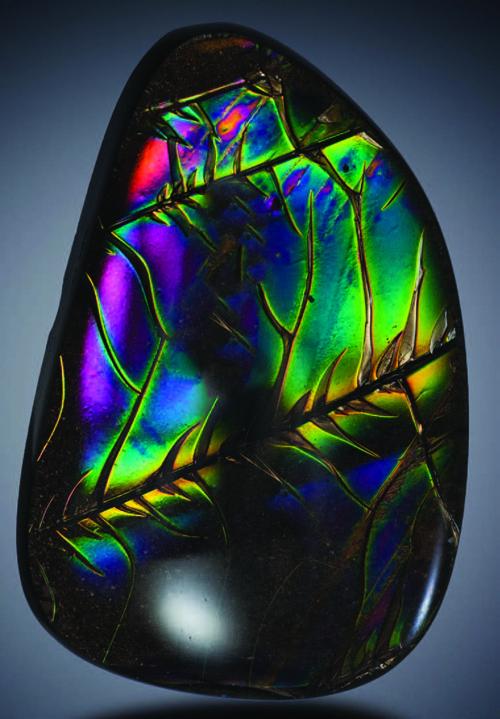 When colour waves reflect through thin layers of material, which differ in refractive index, a loss of some colours and a reinforcement of others can take place. This gives rise to dramatic colour blocks, which may shift with viewing angle.

What Causes the 'Fire' in Fire Obsidian?

Recent laboratory analysis has determined that the ‘fire’ in fire obsidian is caused by thin-film interference. Examples of this form of interference include the sheen of soap bubbles on a sunny day, the streaks of colour on a freshly wiped windshield, and a colourful film of oil on a rain puddle - these are all the results of the interference of light by a very thin film of one material that is spread over the surface of another material.

Collected samples of fire obsidian were investigated with field-emission scanning electron microscopy, X-ray energy-dispersive spectroscopy, electron back-scatter diffraction and optical spectroscopy methods (Ma et al., 2007). The study revealed that thin layers (flow bands) within the obsidian have a thickness of 300 to 700 nm and are enriched with nano-metricised crystals of magnetite. The colour is caused by thin-film optical interference, in which the thin iron-enriched layers have a higher calculated index of refraction (1.496 < n 1.519) than that of the host glass (n = 1.481). 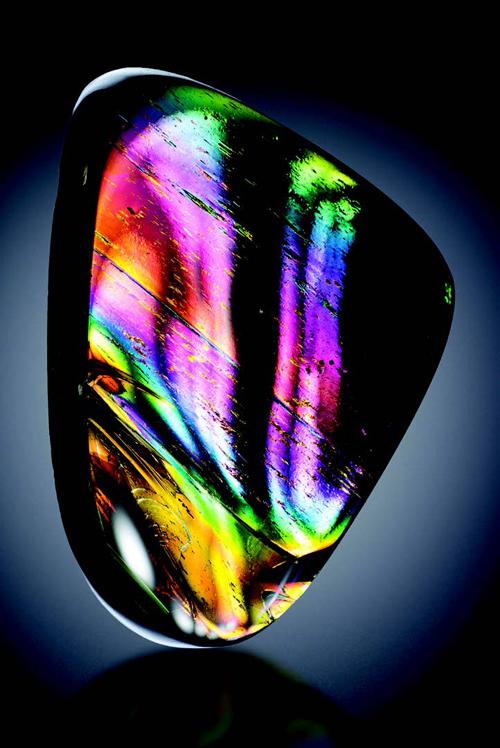 Iridescence is the most widespread of the optical phenomena and can be observed in pearls, fire agate, ‘rainbow calcite’, some obsidians and iris agate. When iridescence is combined with interference, thin-film interference occurs (The Physics Classroom, 2015).

Obsidian is an igneous rock that forms when molten rock material cools so rapidly that atoms are unable to arrange themselves into a crystalline structure. The result is volcanic glass with a smooth uniform texture that breaks with a conchoidal fracture. It is an amorphous material known as a ‘mineraloid’. Pure obsidian is usually dark in appearance, although the colour varies depending on the presence of impurities.

Iron and magnesium typically give obsidian a dark green to brown to black colour. Very few samples are nearly colourless. Certain types, however, display iridescent patterns due to dense and relatively homogenous concentrations of minute suspended inclusions of magnetite that act like diffraction gratings. Descriptive trade names like ‘velvet’ or ‘rainbow’ obsidian are used to market these varieties.

The volcanic highland hosting the fire obsidian is located in southeast Oregon and is an extinct rhyolite dome complex that encompasses approximately 90 km2 at altitudes of 1,400 to 1,950 m (Walker and MacLeod, 1991). Most of the volcanic deposits, which include numerous varieties of obsidian, rhyolite flows and dykes and perlite have been dated at 4-5 million years old on the basis of potassium- argon age dating (Walker et al., 1974). Post-eruption weathering and erosion have removed much of the youngest volcanic deposits, locally exposing older sections of the rhyolite dome. 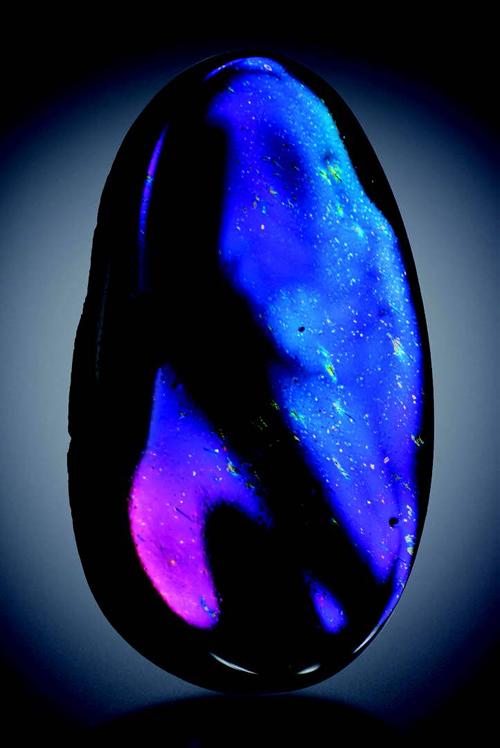 Although extensive deposits of a wide variety of obsidian occur in the area, fire obsidian has been found only in small localised dykes, which appear to be intimately related to, and sub-parallel to, rhyolite dykes. Zones containing the bright colour bands exist as small, isolated and discontinuous ‘pods’ within weak to strongly flow banded black or brown obsidian.

These flow bands are generally aligned sub-parallel to the orientation of the obsidian dykes (Miller, 2006). Hard labour is necessary to excavate the fractured but compact material. Approximately 10 to 20% of the total volume extracted will have the potential to contain fire layers and only about 5% of that amount will contain fire. Fresh from the ground, the irregularly shaped and sized pieces are dirty and opaque. Small test chips can be carefully removed to inspect for the faint thin flow bands. More detailed inspection may reveal the sought-after bright fire reflecting from the band(s). Then the work begins.

Fire obsidian is excellent for cutting and polishing into unique and spectacular cabochons. First, the stone must be cleaned, and then a detailed ‘reading’ of the rock (to determine the exact location and orientation of fire layers) is performed. This is a challenging procedure as every piece is unique. 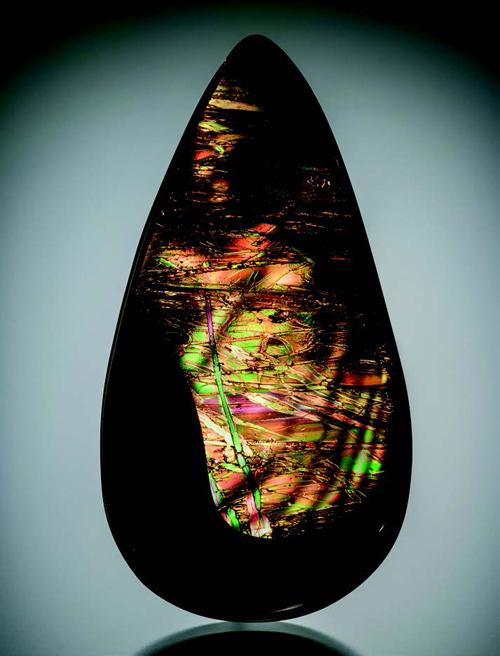 Some layers reflect many colours in bands and patterns, with sharp boundaries between the colours, while in other stones the colours may overlap each other. Colour may exist only on part of the layer, leaving the remainder of the same layer a dull grey.

The colours and intensity of the iridescence (the ‘flash’) can be highly variable along the same layer. Some layers reflect colours on both sides, while others reflect colours on only one side. The colour can occur as single isolated layers in the stone or as several colour layers stacked very closely on top of one another.

Reflective layers are rarely flat. They often undulate and change orientation, usually to a small degree, but these shifts can be abrupt and drastic. Some layers are so contorted as to turn and double back on themselves. The colours reflected by a single layer can have colours that range through the entire spectrum, while other layers display a single colour. Additionally, patterns (striations, blotches, ropes, wrinkles, straw-like shoots, rods and others) observed along with the reflectance can be highly variable.

The cause of these patterns is not known but is possibly the result of small localised differences in the thickness or the orientation of the magnetite enrichment along the flow bands. Successful cutting and polishing of fire obsidian is extremely challenging for the lapidary. Diamond cabochon-making lapidary equipment is ideal for working this material. 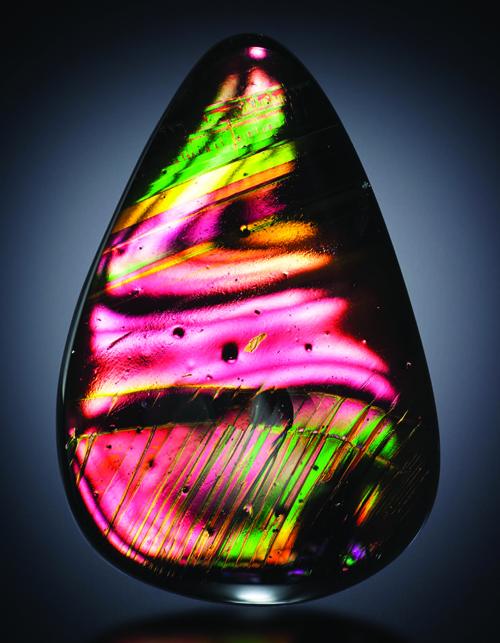 Locating and isolating nano-metric layers within black glass requires skill, diligence and a great deal of patience. Obtaining a high ‘wet’ polish on black glass is difficult and time consuming. Ideal results are achieved using expensive polishing agents such as optical grade cerium oxide.Equipment contamination is a strong concern at all stages of grinding, sanding and polishing, and must be avoided.

Fire obsidian is relatively new to the gem and jewellery community and is known to occur at only one location worldwide. The collecting of fire obsidian is labour intensive and successfully working the material by the lapidary is challenging, expensive, time consuming and tedious. Recent initial marketing efforts have resulted in high interest from jewellers and collectors in finished cabochons and polished windowed specimens. While rough material is seldom available, proven pieces in the form of small slabs or unpolished ‘windowed’ stones are available to the lapidary.

For more information about this material contact Tom at tdodge101@gmail.com. ■

Cover image an example of the beautiful colours found in fire obsidian. All images show samples created by and belonging to either Tom Dodge or Emory Coons. Photo Credits Jeff Scovil.

Tagged under
More in this category: « The Myths, Legends and Controversy Behind Ancient Preseli Bluestone Whitby Jet: A Discussion of its Simulants »
Tweet
Become a Gem-A Member
Apply to become a Gem-A Member
Subscribe to our Newsletter
Keep updated with Gem-A
Sign Up
Get in Touch
Can't find what you're looking for?
Contact Us