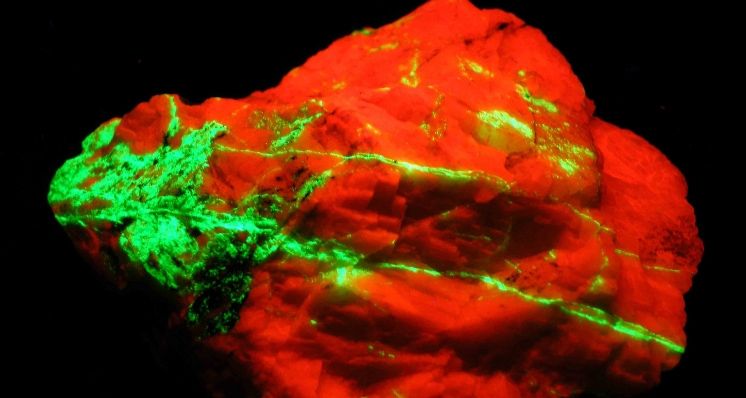 Most of us know about fluorescence in gemstones, but how many use it as part of their gemmological testing routine? Here, Gem-A gemmology tutor Lily Faber, FGA DGA EG, delves deeper into fluorescence and explains why it can be both enlightening and enjoyable for gemmologists.

When we use the term luminescence in gemmology, it generally refers to the term photoluminescence, which is the emission of a cold, visible light when a gem material (or general substance) is excited by light of a shorter wavelength. Two examples are fluorescence and phosphorescence.

Fluorescence occurs when a gem material is illuminated by radiation of shorter wavelengths with higher energy. 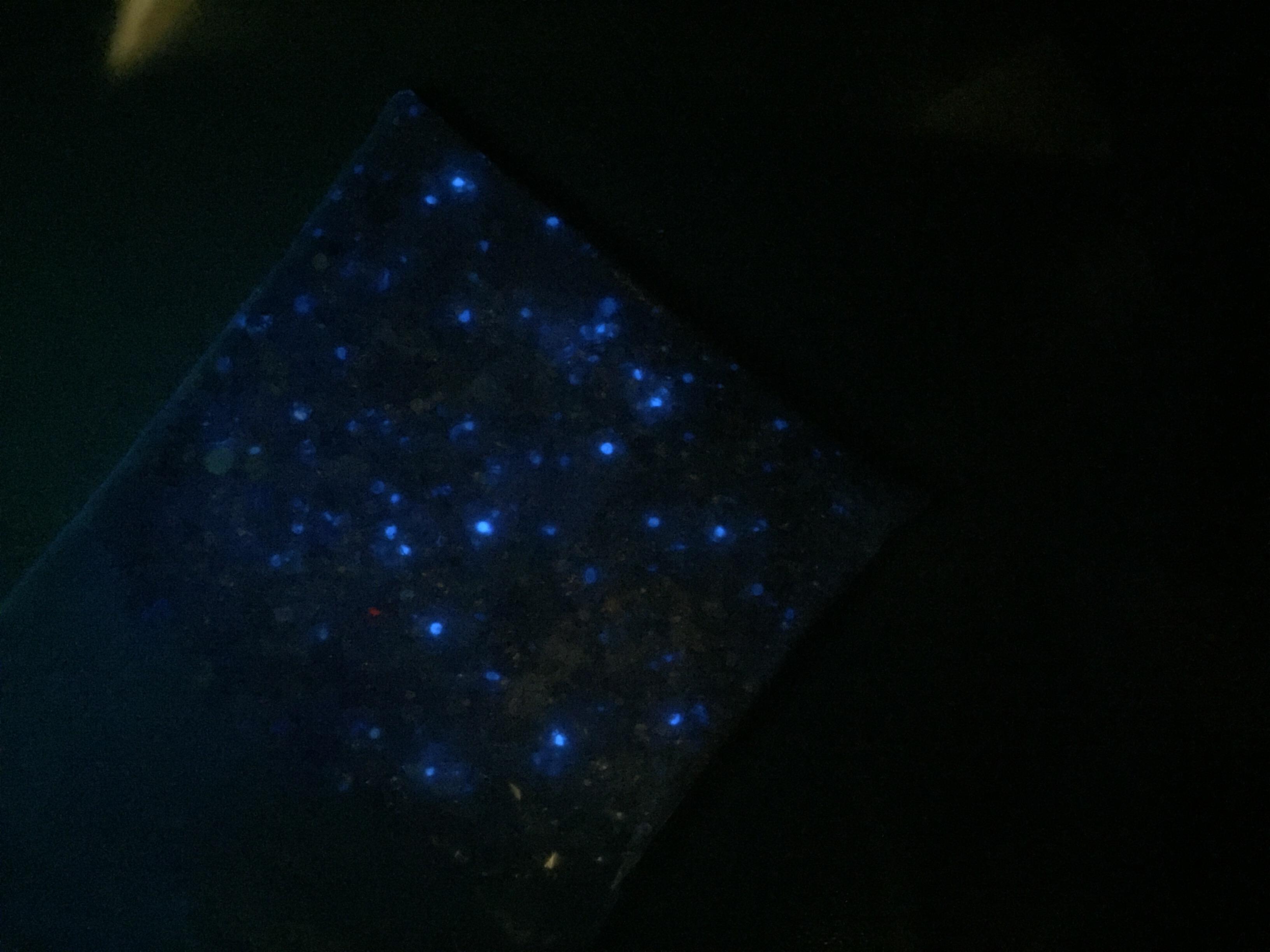 A bag of cubic zirconia under LWUV with areas of blue fluorescence that highlights the presence of diamonds.

The visible light emitted stops when the source of illumination is turned off. Phosphorescence, on the other hand, is a visible light that is emitted by a gem material after the original source of exciting radiation has been switched off.

A famous example of a gemstone that strongly phosphoresces is the blue Hope Diamond, which glows a bright red for several minutes after being excited by short wave UV light. Both fluorescence and phosphorescence can have varying strengths from very strong to weak. If a material does not either fluoresce or phosphoresce, it is considered inert. 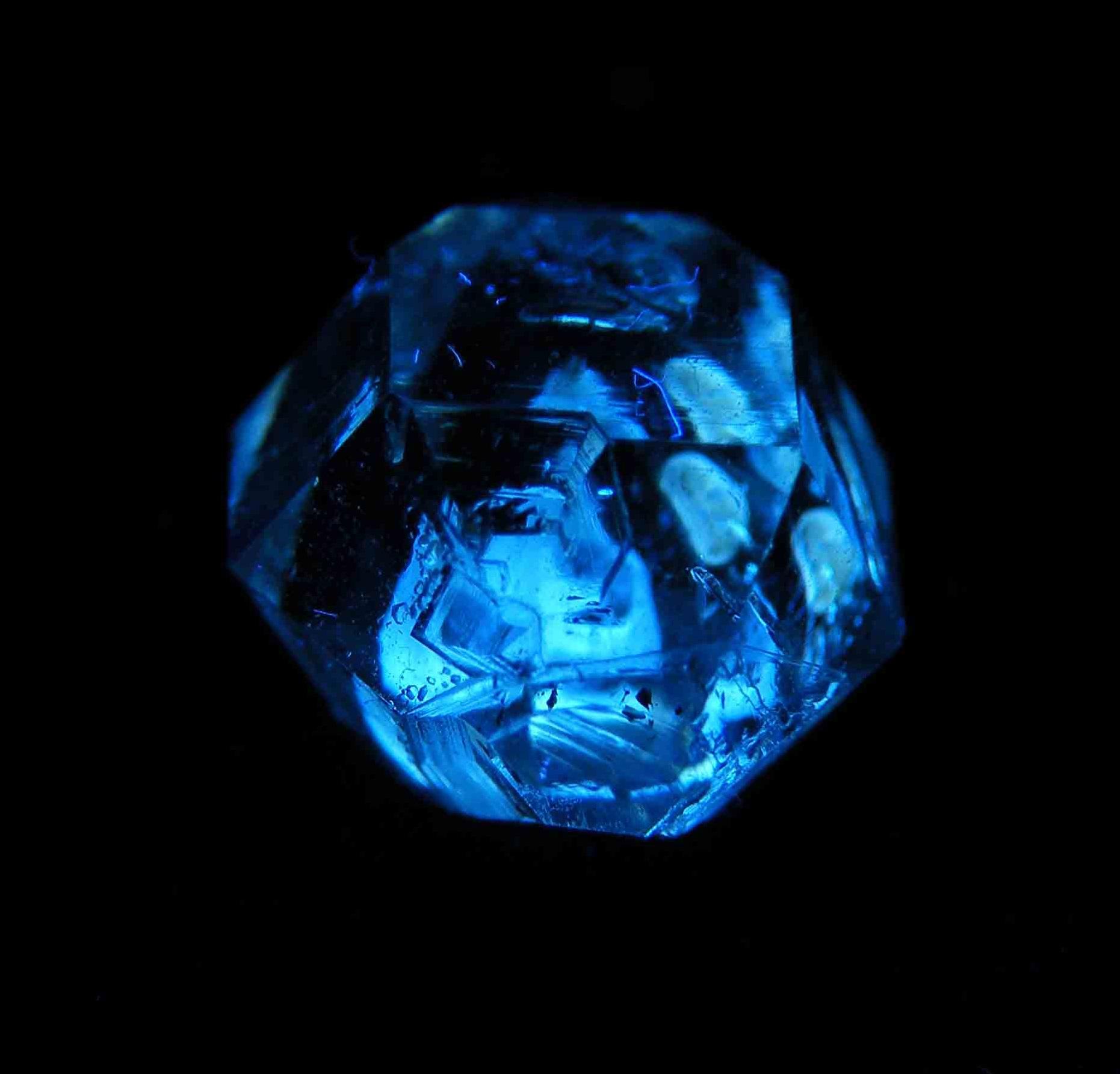 The History of Gemstone Fluorescence

Fluorescence has been observed for years, but it was not until Sir George Stokes extensively documented this effect in relation to gemmology that it officially became part of the scientific lexicon. In 1852, Sir George coined the word fluorescence, named after fluorspar, more commonly known as fluorite, which is a highly fluorescent material.

The ‘Stokes Law of Fluorescence’ or ‘Stokes Shift’ states that the fluorescent emission of light will always be that of a longer wavelength than the excitation source, i.e. the light emitted is of a lower energy than its excitation source.

Why Use Fluorescence to Test Gemstones?

Fluorescence can be a helpful tool when used correctly. Some gemstones have a characteristic or, very rarely, a diagnostic reaction to UV light. One gemstone that notably both fluoresces and phosphoresces is a diamond, which typically fluoresces blue in longwave UV light and then phosphoresces yellow.

This is a diagnostic result for a colourless to yellow diamond in the Cape series (Type Ia), but please be aware that fluorescence is rarely diagnostic as reactions may vary wildly within the same species or variety of gemstone.

Fluorescence can indicate or confirm the identity of a stone. For example, citrine quartz is inert to fluorescence due to the presence of iron, which eliminates fluorescence. If you are testing a yellow stone that may potentially be a citrine, and it fluoresces orangey-yellow under LWUV and red under SWUV, it cannot be a citrine and is more likely to be a scapolite. 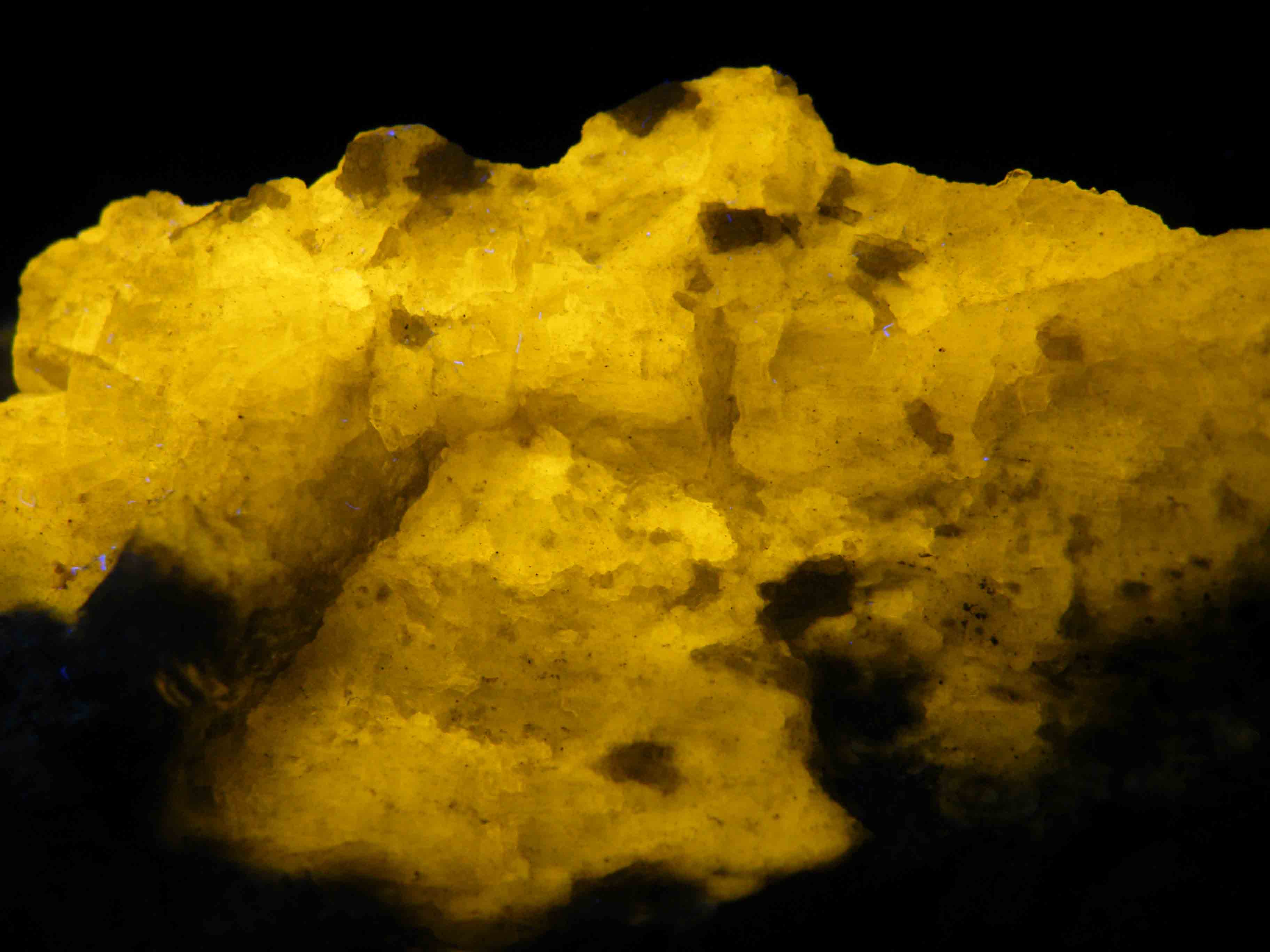 Scapolite from Ontario under LWUV.

Other reasons to use fluorescence? It is quick and normally takes less than one minute to observe reactions. You can test gemstones that are loose, set, rough or fashioned, and you can test either single gemstones or multiple gems at the same time. Finally, it is entertaining!

How Does Fluorescence Occur in Gemstones?

Ultraviolet light (UV) is the most commonly used excitation source. We cannot see UV light as it sits just below the visible light spectrum (400nm- 700nm) at 10-400nm. UV light enables us to see fluorescence because a gem material will absorb this radiation source and then emit light that is lower in energy and therefore visible to the eye. But what is actually happening within the gemstone itself to elicit such a colourful reaction?

It has to do with electrons. When electrons are excited by a source of radiation, they jump to a higher energy level around the nucleus of the atom. The excited electron remains in this excited state for a short period of time until it falls back to its original ground state. As the electron returns to its ground state, it emits energy either as heat or as visible light (fluorescence).

If you are wondering if all minerals fluoresce, the answer is no. Only 15% of all known mineral species exhibit this effect, the causes of which can be very complex. One of the more better-known and documented causes is the presence of activator elements that can be excited by higher energy wavelengths.

Some activators include chromium (Cr), uranium (U), manganese (Mn), lead (Pb), titanium (Ti) and rare earth elements (REE). Some elements are considered to be the complete opposite, however, and when present they eliminate or quench fluorescence, causing a gemstone to be inert. Common quenchers include iron (Fe) and nickel (Ni). 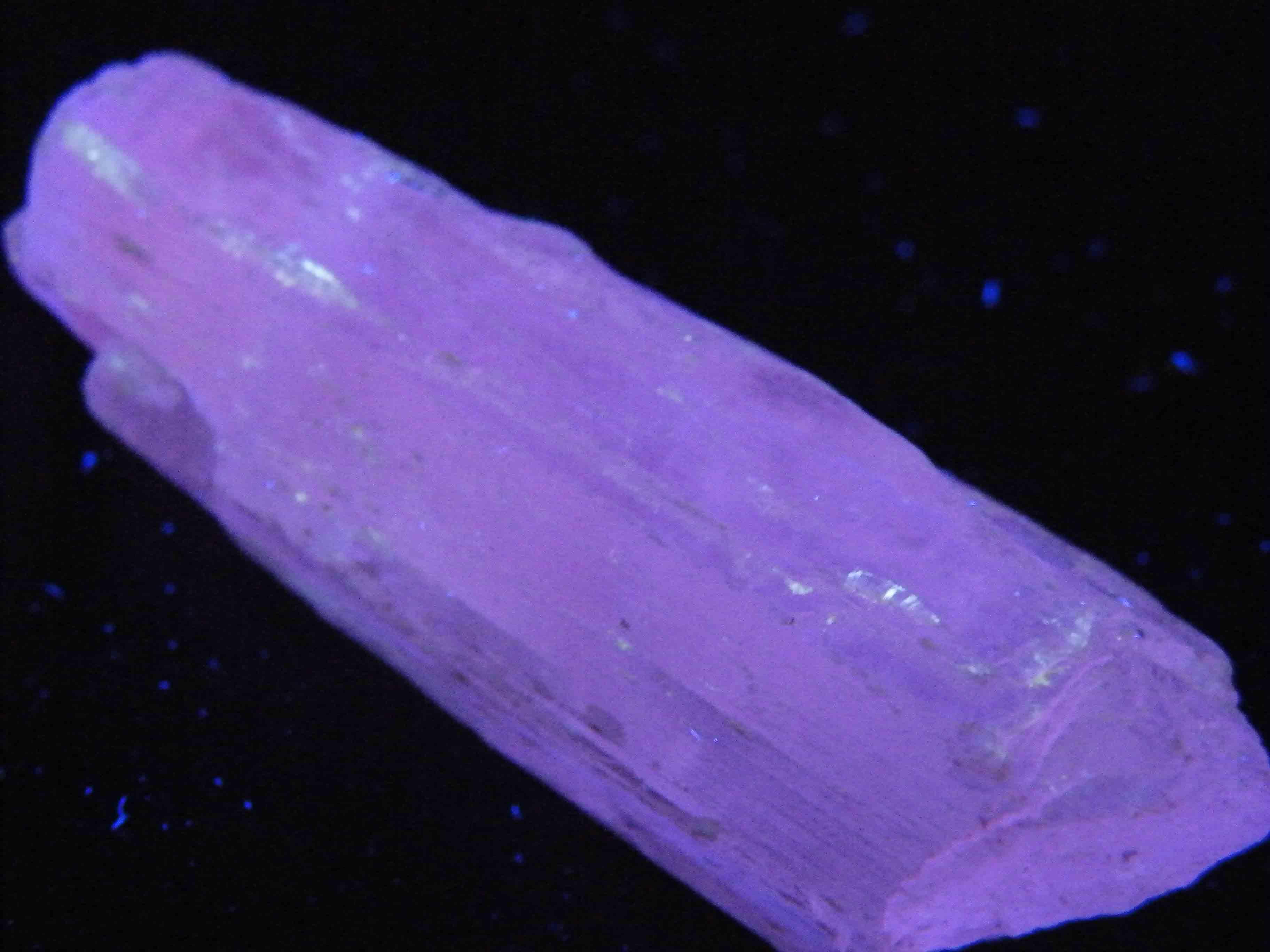 The types of UV light used in testing are long wave (LWUV) with a principle wavelength of 365nm, and short wave (SWUV) with a principle wavelength of 254nm. Different testing equipment ranges from UV keyrings (typically LWUV) to a UV viewing cabinet. When using UV light to test gemstones, it is important to remember that any exposure to UV light can damage your eyes, but particularly use caution when using SWUV as it is more dangerous than LWUV. Always wear protective UV goggles or ensure that your UV cabinet is installed with an eyepiece that filters out UV light.

To properly use a UV keyring, take the following steps:

Sometimes you may see some dull purple or red light in the gemstone or on a few facet edges. This means that the gemstone is reflecting the purple UV light and is not itself a fluorescent reaction.

A: Synthetic verneuil sapphire, scapolite, natural sapphire, topaz and citrine. B: Under LWUV. C: Under SWUV

While fluorescence is not a diagnostic test, and results can vary dramatically even within the same gemstone species (variable emerald results, for example), it can be a useful indication of what a gemstone is. When testing diamonds and colourless, transparent simulants, keep the below chart in mind.

When testing red to pink gemstones,do keep in mind that natural rubies in particular may have variable fluorescence based on their iron content. If iron is present, the ruby will have minimal to no fluorescence. Synthetic rubies tend to have much stronger fluorescent reactions.

When testing green gemstones, fluorescence can be tricky to use for identification purposes. However, it may be useful in terms of recognising the presence of fillers in emeralds or green jadeite jade, for example.

Some resin fillers fluoresce a whitish colour under LWUV and if this reaction is seen in either of the aforementioned stones, it may be an indication that filler is present, especially if the fluorescence is concentrated in seams or certain areas rather than being evenly distributed across the stone.

Note the natural emerald fluorescing a whitish colour (second from right), hinting that a resin filler may have been used. Further testing will be needed to confirm this possibility.

Additionally, natural emeralds, if they do fluoresce, will have a red to inert reaction under LWUV, and a weaker inert or green reaction under SWUV. Synthetic emeralds may fluoresce red or, in the case of the synthetic hydrothermal emerald, they may be inert if doped with iron to imitate a natural inert reaction.

Untreated green jadeite does not fluoresce, so any other reaction should be regarded with suspicion and further testing will be needed. When testing yellow gemstones the bottom chart may prove useful.

As is evident, fluorescence can be a helpful tool when testing gemstones, though not always diagnostic. It is a quick test that is one of the more exciting ones in the world of gemmology. ■

Tagged under
More in this category: « Investigating Fake Rough with Gem Testing Laboratory Jaipur The Fascinating History of Platinum Jewellery »
Tweet
Become a Gem-A Member
Apply to become a Gem-A Member
Subscribe to our Newsletter
Keep updated with Gem-A
Sign Up
Get in Touch
Can't find what you're looking for?
Contact Us