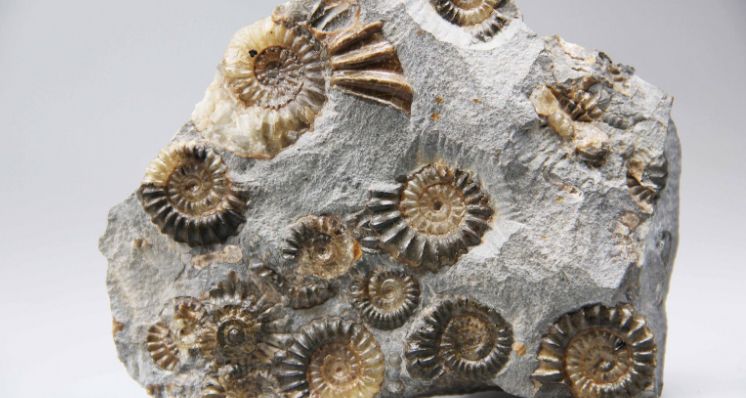 Inspired by a fantastic specimen in the Gem-A Gemstone & Mineral Collection (pictured above), tutor Pat Daly FGA DGA explores the use of fossils as decorative objects and describes some collectable specimens, like ammonites, trilobites and peanut wood.

Fossilised tree resin and wood, under the names of amber and jet, have been well-known gem materials for over 2,000 years. Many other fossiliferous rocks, usually described as marble, have also been used for ornaments and to beautify private and public buildings. The same materials have been used continuously since antiquity and, especially in more recent decades, an increasing amount of fossil material has reached the gem and decorative stone markets.

The word fossil first meant something dug from the ground (other than vegetables) but the meaning changed as scientific consensus grew that they represent the remains of once-living organisms or, sometimes, the traces of their activities. 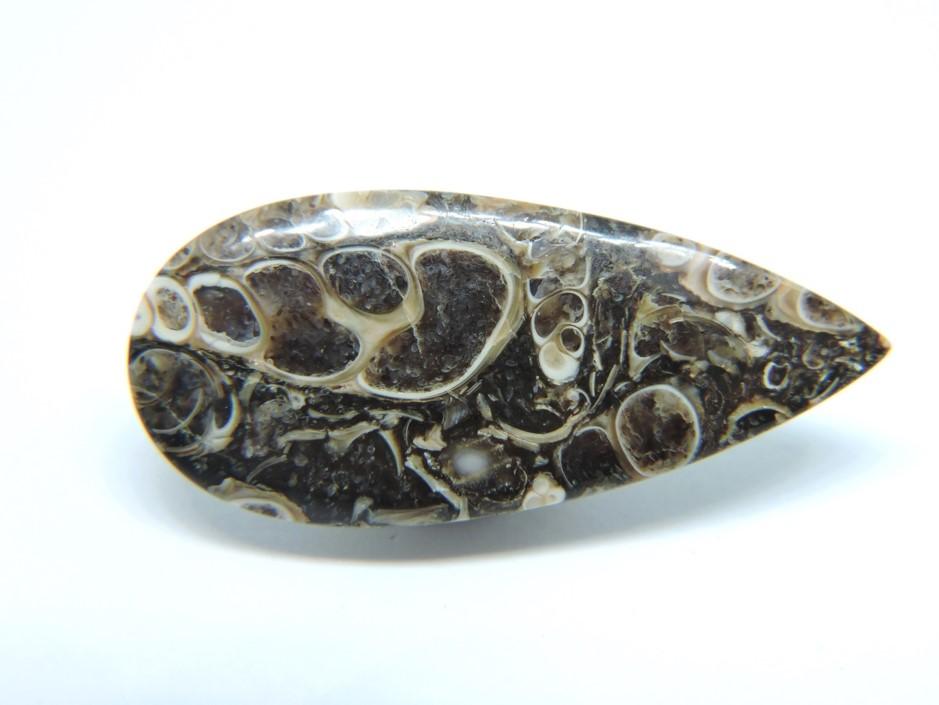 Amber is famous for containing fossilised insects and other small animals. These fossils within a fossil add considerable scientific and general interest to this already appealing gemstone. Jet may show evidence of its origin on the surfaces of unpolished pieces. Traces of wood grain and impressions of marine animals are found. Polished jet is less likely to reveal its organic history but suitably oriented surfaces may show subtle wood grain structures.

Other fossil plant materials include copal resin, the less durable equivalent of amber, and wood in various states of preservation. Bog oak, for example, is a relatively recent wood which has been preserved in peat bogs. In western Ireland it is used as a decorative material and has been used for souvenir jewellery. Petrified wood is replaced by chalcedony which is sometimes prettily coloured by iron oxides. Tree rings, radial graining and the outlines of plant cells may be clearly displayed if the replacement was sufficiently gradual.

Animal fossils include mammoth ivory from the permafrost of Siberia and Canada. It has been used in quantity as a substitute for elephant ivory for more than 100 years. The two types can be told apart if the cross-sectional structure of the tusk is well displayed on the piece. A material called odontolite, from the south of France consists of fossil teeth and bones. It becomes a fine blue colour after heat treatment, closely resembling turquoise.

Dinosaur bone is sometimes replaced by chalcedony or jasper and it may be interestingly patterned if the original structures are preserved.

Well-preserved ammonites are attractive fossils from about the same era of Earth history. The shells were formed as flat spirals which once housed squid-like animals. The only living animal with which they can be compared closely is the pearly nautilus, the shells of which have also been widely used in decorative arts. The chambered shells of ammonites are bought as decorative and collectible items in their own right. Large, expertly prepared examples may sell for hundreds to thousands of pounds. 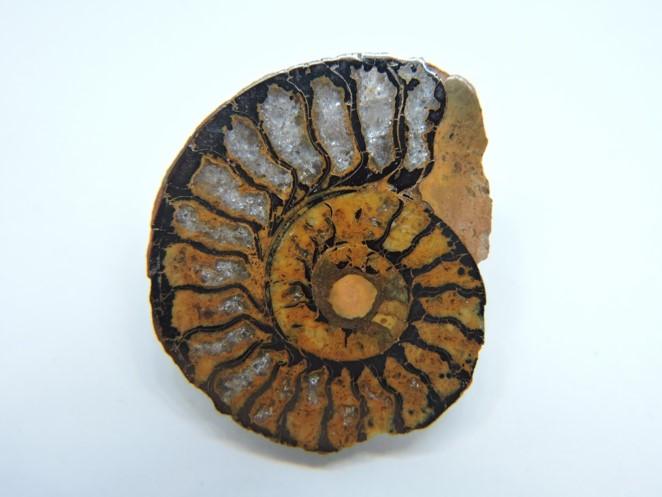 Some ammonite shells are iridescent, for example, some shells from Madagascar and from Somerset in England. The most spectacular specimens come from Alberta in Canada, where whole, brilliantly iridescent shells up to almost a metre wide are found.

Small pieces are cut and polished for jewellery under the trade names ammolite and korite. Recently, small pieces of ammolite have been set in the chambers of halved ammonite shells from Madagascar, enhancing their pleasing shape with bright colours. 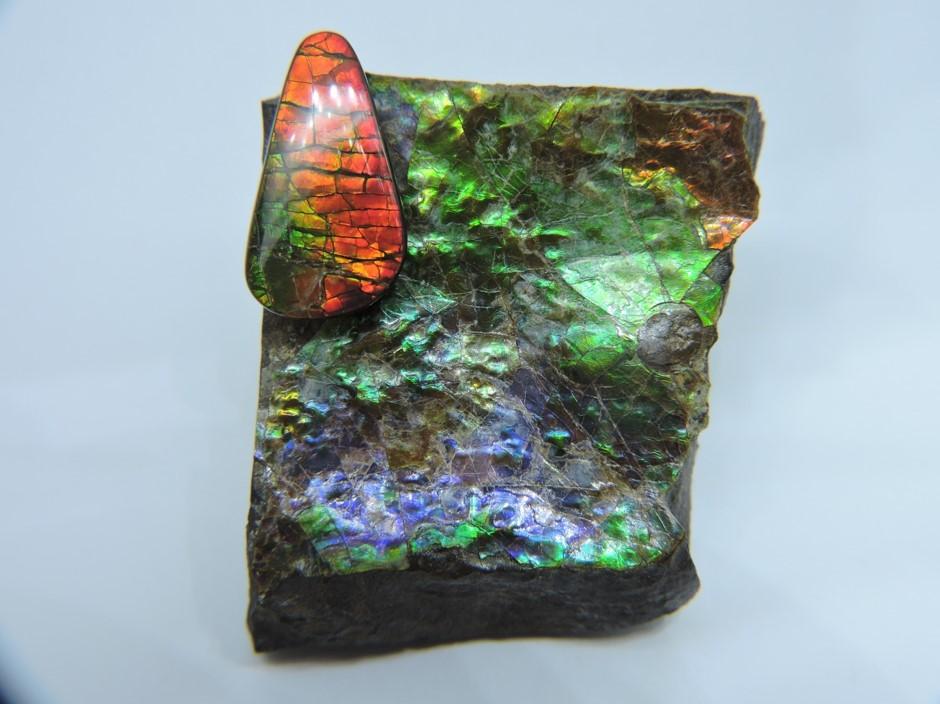 Trilobites are distinctively-shaped extinct arthropods related to crustaceans. Like ammonites they are very collectible and may be of substantial value. Some of the best ones have been recovered from limestones, nowadays especially from Morocco but in the past from mines in Dudley in Worcestershire. In the past fine trilobites from this locality were set in jewellery, some pieces of which are in the Natural History Museum in London.

Snail shells, though geometrically pleasing, are less commonly used for decoration. They are among fossils preserved in precious opal from Australia. Other shells preserved in this way are those of bivalves and belemnite guards (belemnites are a group of extinct squid-like animals without external shells). 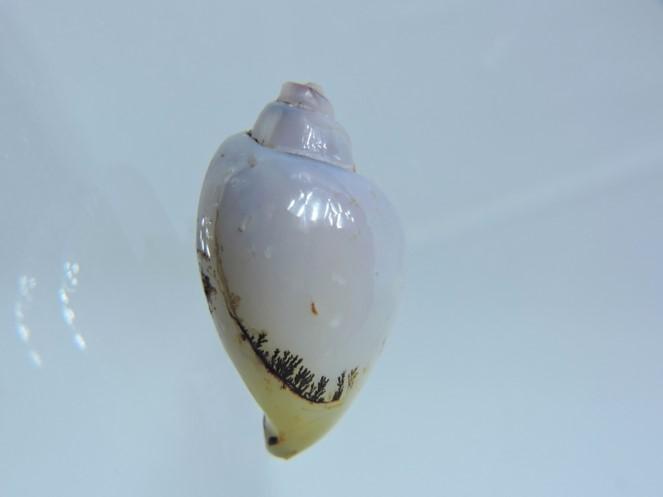 Skeletons of plesiosaurs have been found with the bones preserved in opal. Happily, two of them were not dispersed and they are now on display in Australian museums.

Other snail fossils are replaced by chalcedony and good examples can make interesting specimens. It is a point of interest that some of them are left-oriented (with the spire uppermost, the aperture is on the left hand side rather than the right, which is more usual).

'Turritella agate' from Wyoming in the USA, incorporates abundant shells of a freshwater snail (Turritella is a marine snail, these are fossils of the genus Elimia). This material is well known and frequently polished, especially by hobbyists. Close inspection with a loupe shows that the snail shells are full of seed-shaped fossils which may be those of ostracods (a type of crustacean).

Fossil-rich limestones have been used for centuries as decorative materials for the attractive patterns produced by the shells. They have been employed particularly for interior decoration, often under the name “marble”. Marble is a limestone which has been changed by heat and pressure but the distinction is not always acknowledged. Many examples are given in the book by Monica Price. Some of the shells in the eye-catching variety fire marble are brightly iridescent. It is no longer mined and, nowadays, is only likely to be seen in antique objet d’arts. 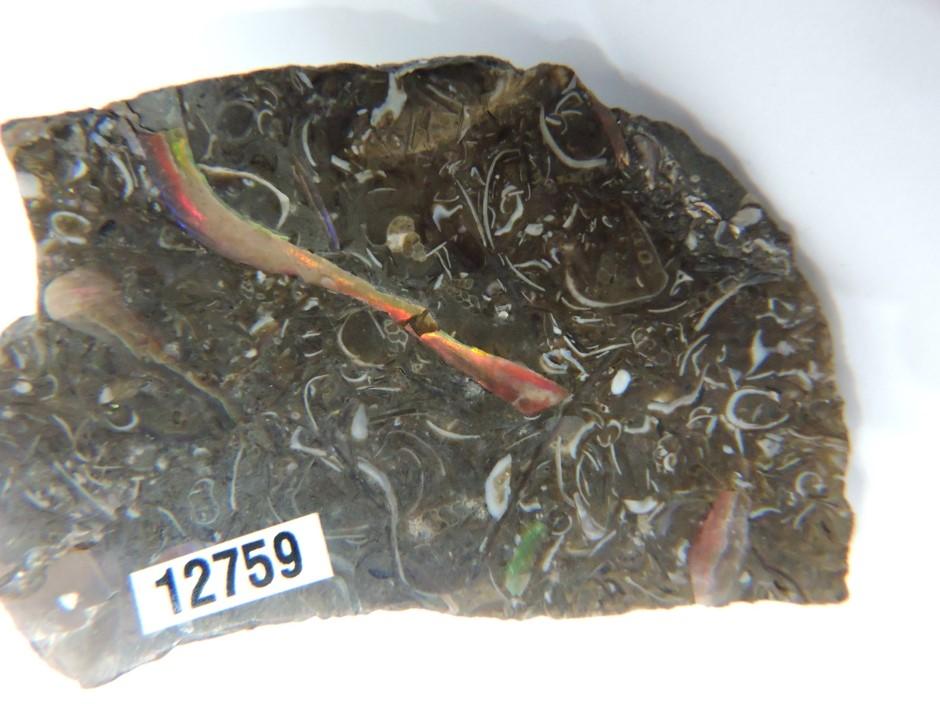 A more recent rock, packed with fossils, has come from Pakistan, and Morocco is yielding polished slabs of grey limestone containing straight nautilus shells. Corals in limestones add visual interest by the regularity of their supporting structures.

A stone from Western Australia is a fossilised wood incorporating pale patches which represent holes bored by shipworms (wood-boring marine bivalves). It is called peanut wood because of the size and shape of many of the patches, and is cut into attractive cabochons. 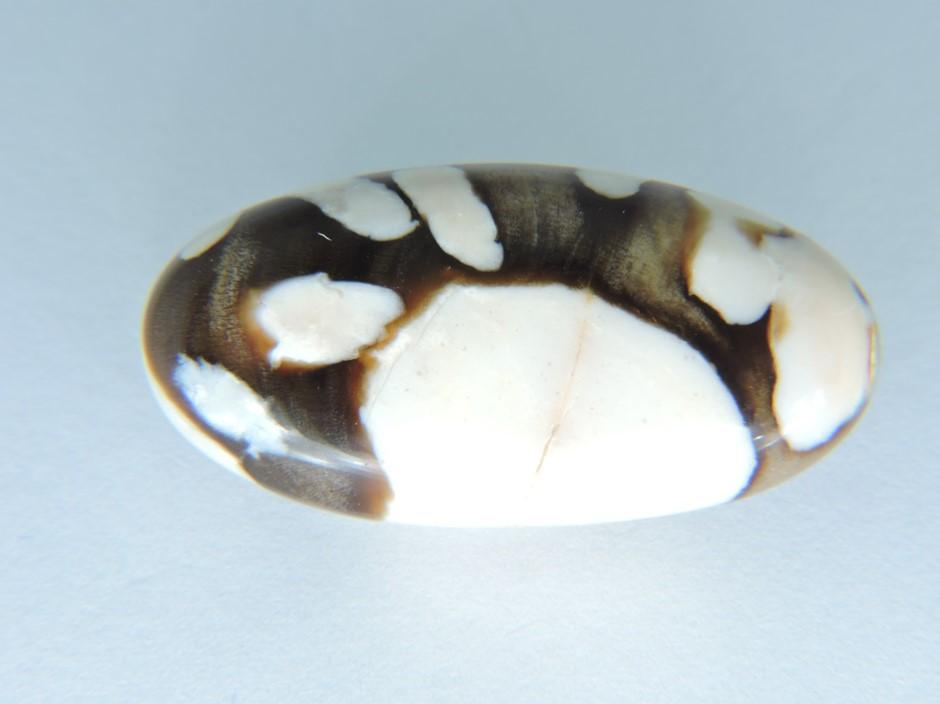 An example of peanut wood. Photo courtesy of Pat Daly.

An interesting rock, called landscape marble, from the Bristol district in England, is a limestone which displays features resembling trees and bushes. They were produced by algal growths in environment where the activities of grazing snails were inhibited.

Some of the better-known fossil materials used as decorative stones have been mentioned and illustrated here but there are many others, especially among the fossil “marbles”. Examples may be seen in natural history museums. The Corsi collection, an important collection of decorative stones including fossiliferous varieties, is housed in the Oxford Natural History Museum; photographs, with accompanying descriptions, may be viewed online.

More in this category: « Beginner's Guide: What Are the Different Types of Opal? What Makes A Gemstone Rare? Diamond, Painite, Grandiderite and More »
Tweet
Become a Gem-A Member
Apply to become a Gem-A Member
Subscribe to our Newsletter
Keep updated with Gem-A
Sign Up
Get in Touch
Can't find what you're looking for?
Contact Us