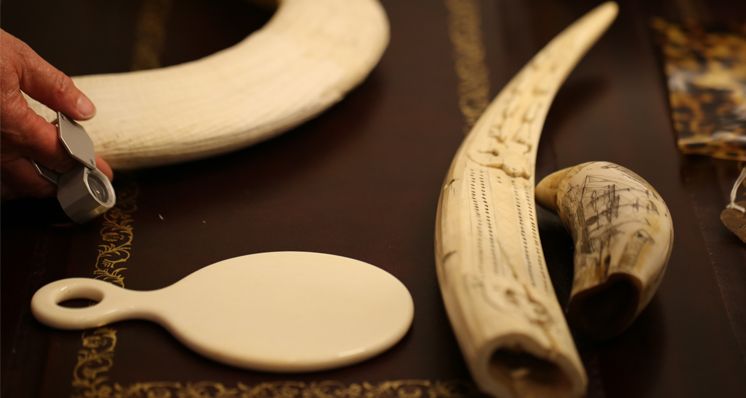 As the author of Gem and Ornamental Materials of Organic Origin and Ivory, Maggie was appointed Gem-A president last year. Her Gem Central evening was split into an informative talk on organics followed by the opportunity to get the loupe out and admire the array of samples that Maggie had brought and from the Gem-A organics collection.

The talk began with a discussion about copal - an immature resin, and amber - the more mature variety. Maggie then gave a quick rundown of the visual differences between amber found in a few different localities.

Baltic amber dating from about 35 million years ago is opaque or transparent. The surface of the amber darkens with age.

Dominican amber is about 15 million years old. Some has good fluorescence and it often has a lot of inclusions including insects or debris from the forest floor. It is often darker than Baltic amber.

Mexican amber is around 20 million years old and has less insect inclusions than Dominican amber. It can be so clear that it has the appearance of plastic, so you need to know what it is to appreciate it. Some has a stripy appearance caused by debris sticking to it when it formed.

Amber from Myanmar, so-called Burmite is 100 million years old and is from the Cretaceous Period. Burmite is one of the very few ambers which can occur in a true red colour. The red variety is rare and therefore valuable.

Australian amber is a fairly new find, discovered in Cape York, Queensland.  The precise locality is still a secret but is known to be crocodile infested. Believed to be about 12 million years old it has a lower melting point than the other varieties of amber, meaning it is less durable. The long-term effect of polishing Australian amber is unknown.

It is important for dealers to know what they are selling and to be able to spot synthetics and heat treatments. Many Bakelite necklaces have been falsely sold as amber. Maggie let us in on a good tip - as far as she is aware opaque red amber doesn’t exist. So if it is sold as such, be suspicious!

But you can also whip out the specific gravity test, place the suspected amber in saturated salt water - if it floats it is likely to be amber. But don’t forget to properly wash the salt out after, Maggie warned the audience! Otherwise when the water evaporates you will be left with white powder residue.

Maggie also discussed amber treatments and the mysteries surrounding green Ethiopian amber. Next she moved on to talk about horn.

It is possible to differentiate between rhino and other horns through simple observation. Rhino horn is solid throughout, whereas other horns, for example buffalo, are hollow for most of their length. It can be difficult to distinguish the tip of a buffalo horn from rhino horn in a small carving.

Tortoiseshell is taken from marine turtles including the hawksbill turtle, loggerhead turtle and green sea turtle. All species are endangered and it is important for traders to remember that tortoiseshell can only be sold if it is pre-1947 and has not been altered since then. It is also salient to remember that carbon dating cannot be relied upon to date the item as it gives an indication only of when the turtle died, not when the tortoiseshell was worked.

"We should not rush to a solution purely on the basis of emotions as it may not truly benefit the animals” the title of the most recent column by Maggie in the Spring issue of Gems&Jewellery, providing an update on the UK laws regarding organic materials such as ivory. Worth a read if you have not already seen it.

During the talk Maggie commented on the current muddle regarding ivory laws, and appealed to Gem Central attendees to remember that "burning ivory items won’t bring the elephants back, in fact who would know if I were to burn the beads I am wearing? The most important thing you can do is not buy new ivory".

It is incredibly important to be able to tell the difference between different types of ivory, for example walrus and elephant. And for the auctioneers selling the items to know what they are selling.

Anomalies can occur as these are organic products. Maggie showed us an image of a tooth with bubble-like inclusions, an occurrence that happened in a whole pod of sperm whales.

Interested in finding out more about this fascinating subject? Don’t miss out on the Summer issue of Gems&Jewellery where Maggie has kindly agreed to discuss terminology pertaining to organics. Discussing the problems faced with tortoiseshell, and amber she clears up some misconceptions for Gem-A readers.

Hosted once a month at Gem-A headquarters at Ely Place London, Gem Central evenings are a unique opportunity to learn from experts and meet fellow gemmology enthusiasts. Free for Gem-A members and students, or just £10 for non-members. ■

Tagged under
More in this category: « Gem Central Exploring Ruby Treatments with Julia Griffith FGA DGA EG A Man of the Ocean: Diving for Organics with Eric Fritz »
Tweet
Become a Gem-A Member
Apply to become a Gem-A Member
Subscribe to our Newsletter
Keep updated with Gem-A
Sign Up
Get in Touch
Can't find what you're looking for?
Contact Us