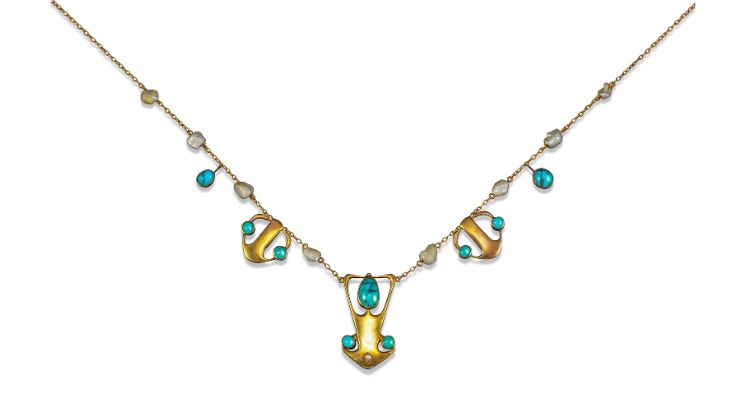 Obsolete and largely forgotten jewellery books are a rare and desirable resource for jewellery historians since they provide a fascinating and nostalgic window into the past. Frequently revealing obscure and intriguing historical facts, they may also contain charming inaccuracies which would be considered intolerable in today’s climate of technical exactitude.

Invariably written by long dead academics or enthusiastic collectors, these books were published at a time when goods on the market were abundant, prices were infinitely affordable and the sophistication of the 21st century’s international jewellery market was as remote as science fiction. 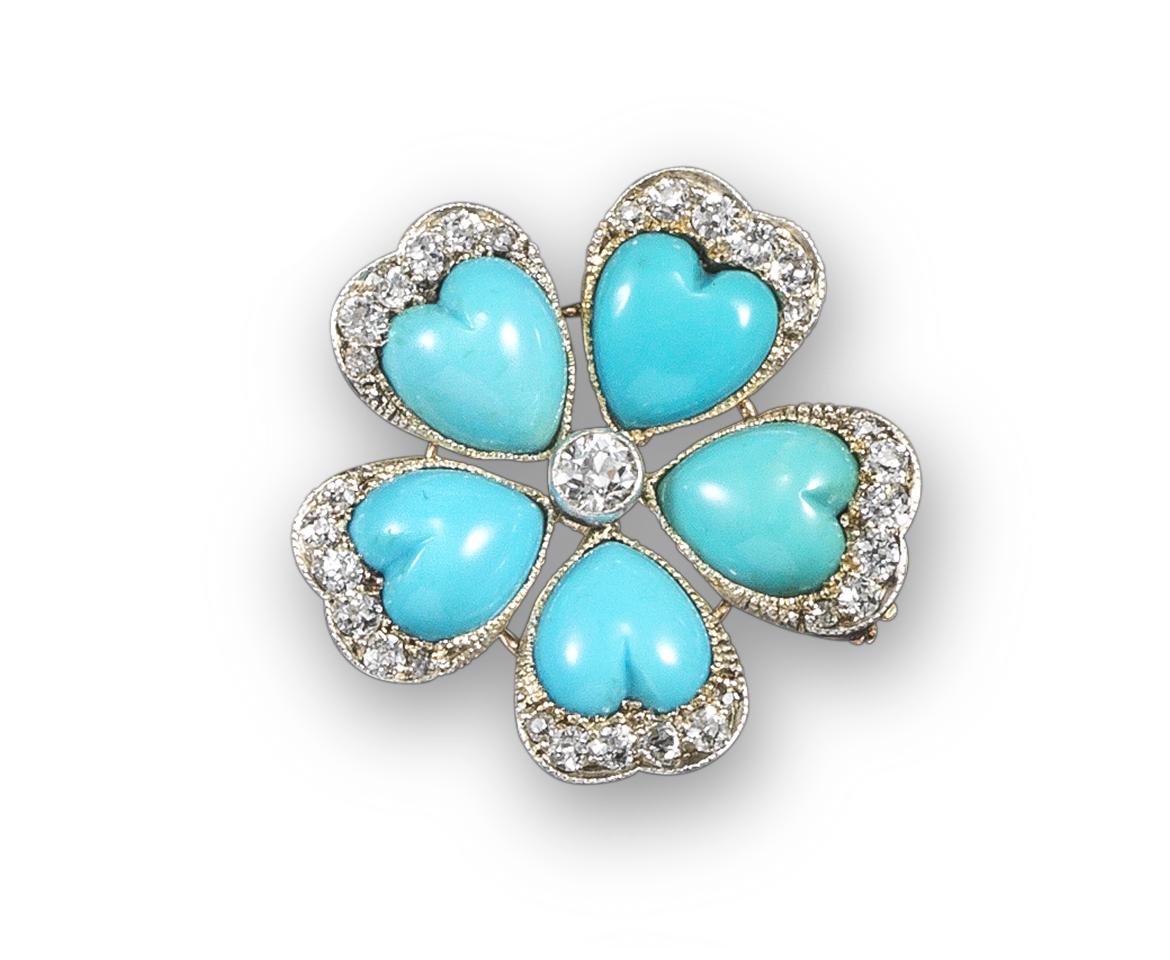 Such a book is Jewels of Romance and Renown by Mary Abbott, published in 1933. The book examines the traditions and royal associations relating to a number of prominent gemstones and actually contains some very useful information indeed, particularly where rubies, sapphires, opals and jade are concerned.

Chapter VIII, Turquoise For A Royal Duchess provides all sorts of interesting and little-known facts about this decidedly enigmatic gem and, while it is very much written in the flowery prose of the time, it really does come up with some quite surprising anecdotal detail. In Persia, for example, turquoise is known as ‘firunza’ meaning victory. 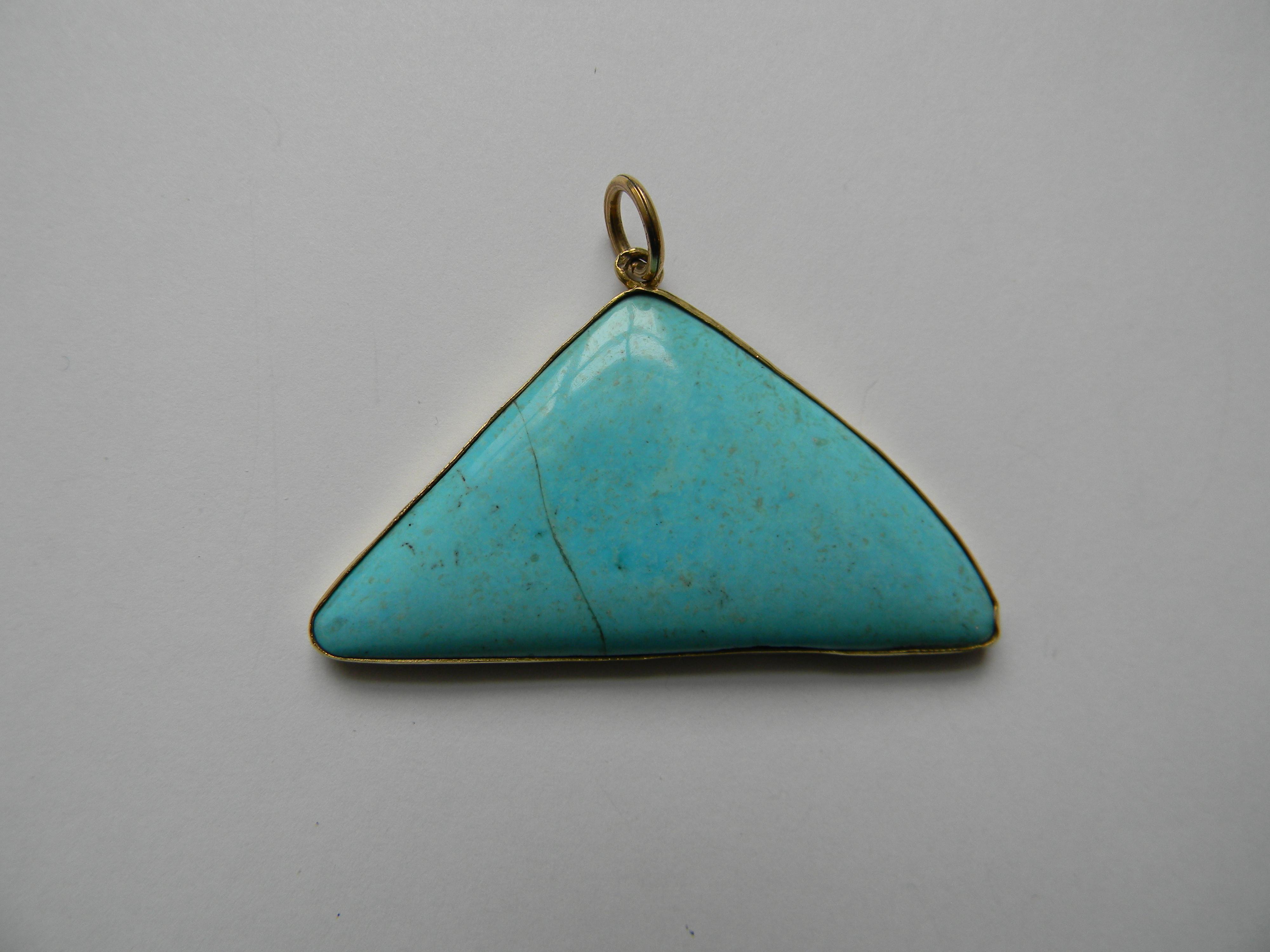 An interesting Persian gold pendant mounted with a large flat-cut triangular turquoise plaque. This specimen was brought back from Tehran at the beginning of the 19th century and is now displayed in the Treasure Room at Blair Castle, home of the Duke of Atholl. A note is attached which reads “Very valuable and the setting should never be changed. It must be carefully preserved amongst the Duke’s curiosities” (Image courtesy of Blair Castle, Atholl Estates).

Historically, Persian turquoise was highly prized and extremely valuable to the extent that the Shahs of Persia maintained the rights to the turquoise mines at Kishapur (a city located in the north east region of latter-day Iran). Indeed, the finest specimens were presented to the Shah for his personal inspection — and retention if he so desired.

In Persia, turquoise was regarded as “the most powerful of all amulets against the influence of the Evil Eye” and it was customary to “hang a turquoise pendant round a baby’s neck to ward off ill-health and disease”. Clearly this was the forerunner of the evil eye pendants sold in tourist shops all over the Middle East today.

One of the oldest beliefs about turquoise was that it had a benign influence upon horses. Attached to the bridle it would “keep the horse from stumbling in stony places and from suffering ill effects after drinking cold water when overheated” — in other words a primitive mascot to prevent colic. 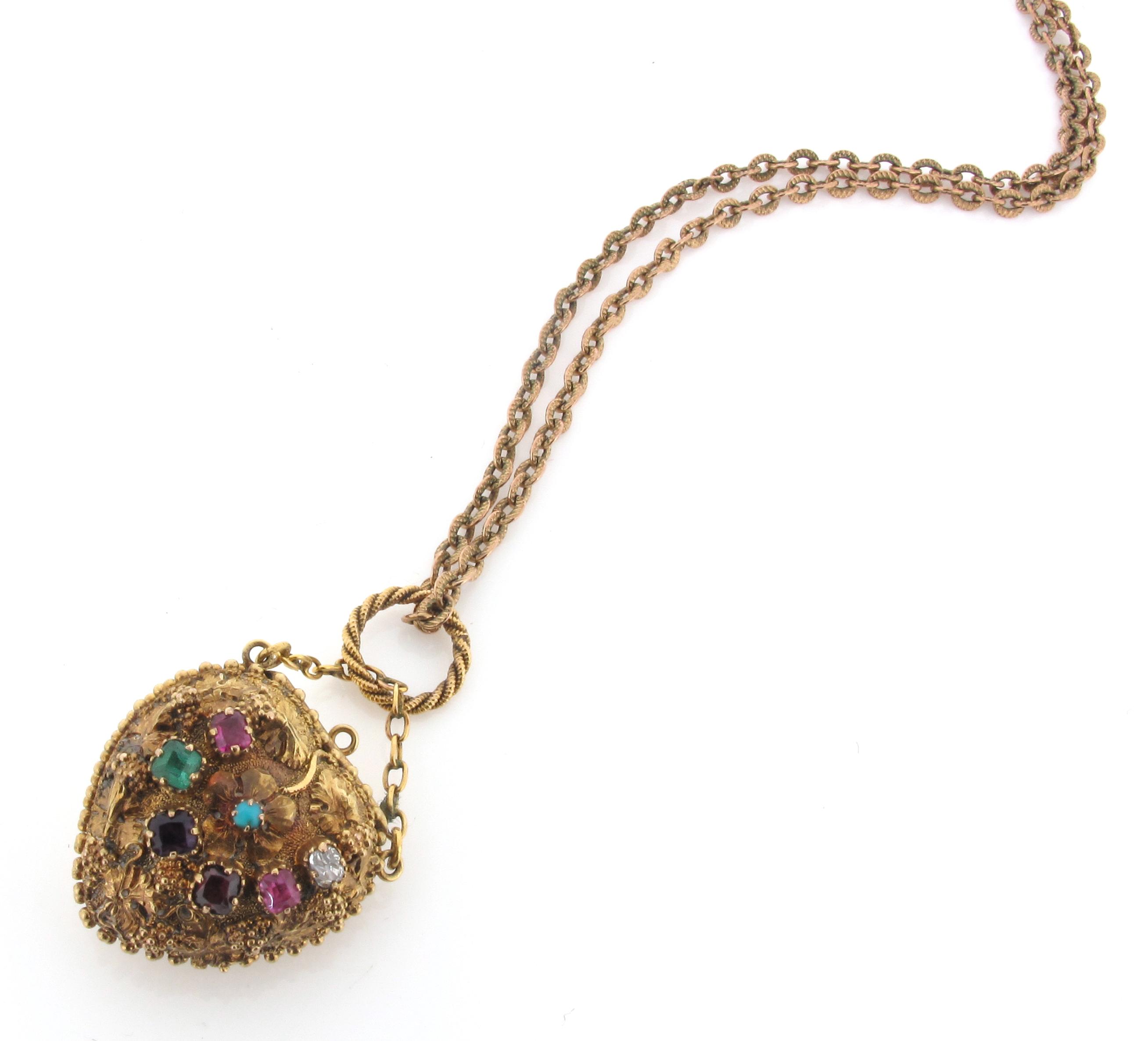 A Georgian gold heart shape sentimental locket with turquoise forget me not centre in a vari gem-set surround spelling ‘Regard’. Image courtesy of Charlotte Glyde at Woolley & Wallis.

True or not, it is all about perception. The reputation that turquoise gained as a talismanic gem became so widespread that by the 17th century horses in England were sometimes saddled and bridled in turquoise-studded tack, while in New Mexico, Native Americans mounted turquoise known as duklig on their hunting bows believing that the arrows were far more likely to hit their targets.

Read more: Turquoise for Those Born in December

Whatever benefit there is to be gained from turquoise as an amuletic charm, it is its abundant use in antique and later jewellery which justifies its status as one of the most popular of all semi-precious gemstones.

In the Georgian era, its association with the forget-me-not flower resulted in endless sentimental gold padlocks, hearts and friendship rings (known as Fede rings) being set with turquoise, often in clusters of compatible gems such as rubies and half pearls.

A group of Victorian pavé set turquoise jewels. Note the discolouration of one stone set in the scallop pendant. Image courtesy of Charlotte Glyde at Woolley & Wallis.

Versatile and striking when mounted in high carat bright yellow gold, it became extremely fashionable in the Victorian age to set turquoise in domed, pavé clusters of small, round cabochons reminiscent of Liquorice Allsorts. Gemmologists know only too well the problem associated with many turquoises such as these: their porous nature increases their tendency of turning an ugly and undesirable dirty green colour, degrading appearance and value.

Turquoise is undoubtedly the gem most closely aligned to Arts and Crafts jewellery and was liberally used by a wide range of designer craftsmen, most notably Archibald Knox for Liberty & Co and the commercially successful firm Murrle Bennett & Co. 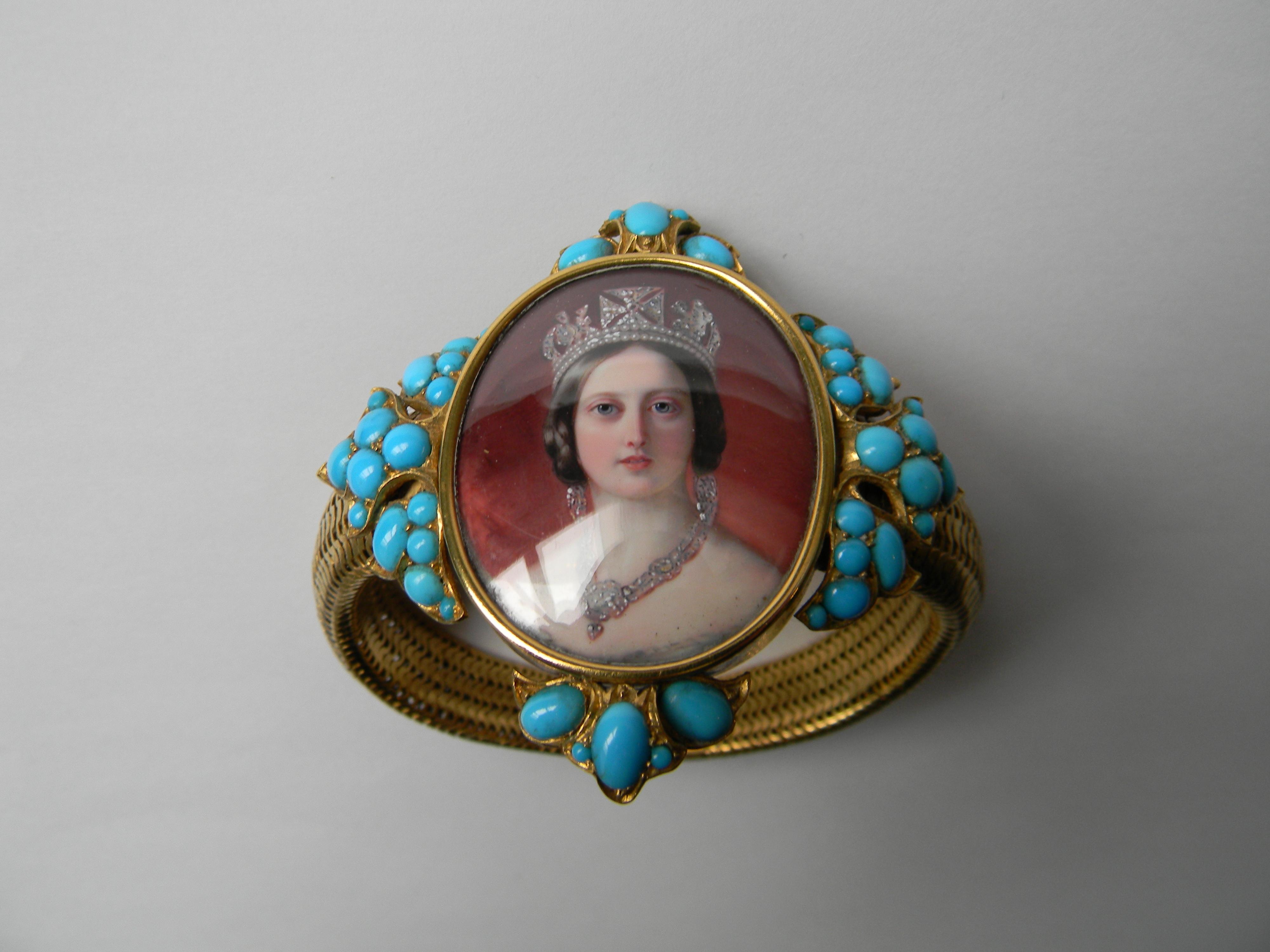 A gold mesh bracelet mounted with a miniature of Queen Victoria in a turquoise studded frame. Presented to The Duchess of Atholl by HM The Queen in July 1852 (Image courtesy of Blair castle, Atholl Estates).

Jewellery from this period was frequently of naturalistic or organic design and the turquoise itself often contained elements of native limonite known as turquoise matrix. Irregular lumps of turquoise matrix were also popular as an accompaniment to long gold guard chains, while polished cabochons were routinely set with pearls in low-grade nine carat gold pendants, bar brooches and inexpensive rings.

Its use continued through the 20th century, whether as an accompaniment to diamonds in bold and distinctive Art Deco brooches or in contrasting and colourful marquetry patterns with onyx, coral and ivory in accessories such as cigarette cases and powder compacts. 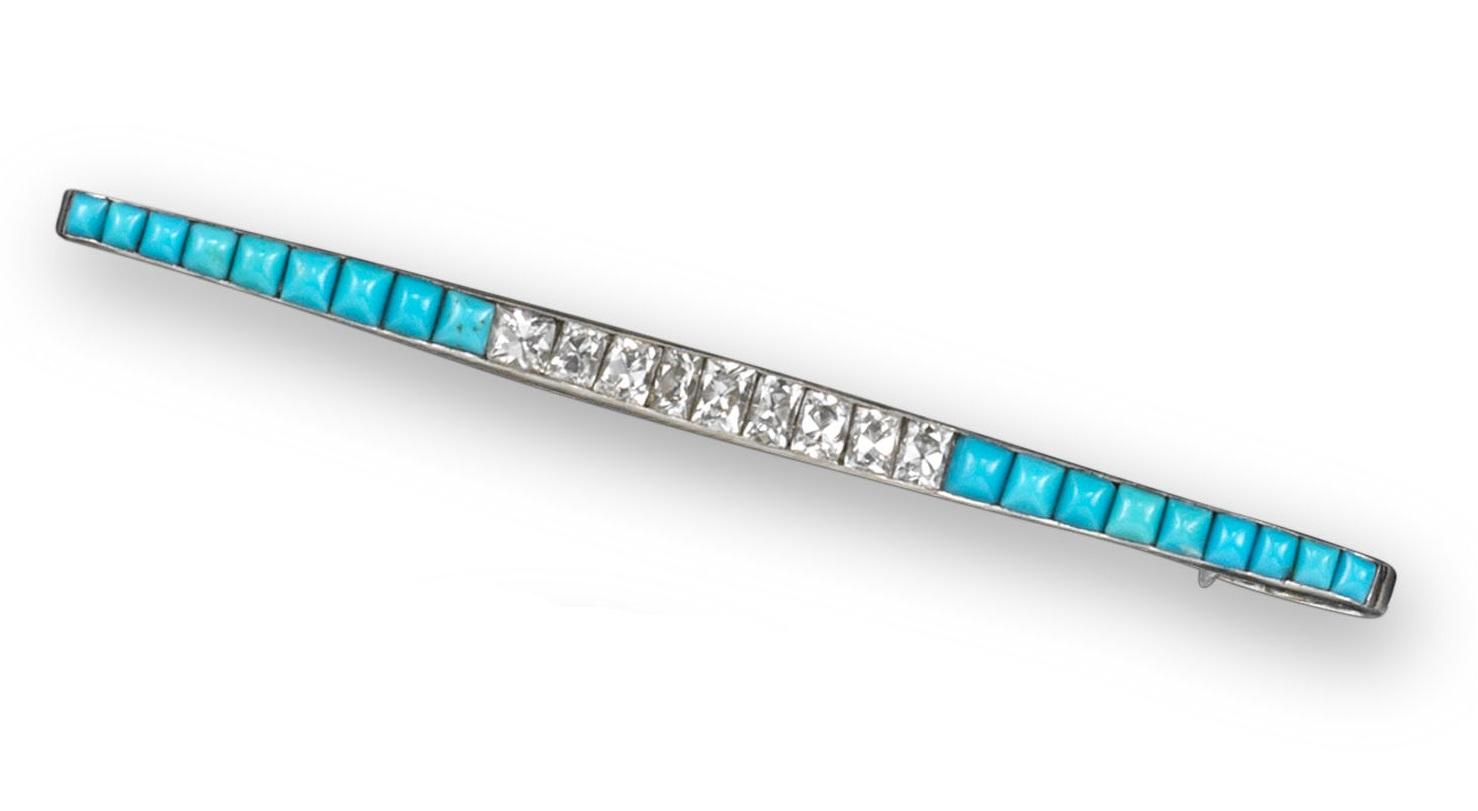 The Post War era saw turquoise revert to its 19th century format of clusters of small, pavé-set cabochons but this time mounted in asymmetrical, three-dimensional gold frames alongside other primary-coloured gems such as ruby, sapphire, amethyst and emerald.

Visually striking and versatile, accessible and affordable, the popularity of turquoise has rarely, if ever, diminished. While there are certainly very good copies readily available on the market, the universal affection for genuine turquoise means this most distinctive of gems looks likely to be in demand well into the 21st century and beyond.

This article was originally published in the Autumn 2019 edition of Gems&Jewellery (Vol. 28, No. 3).

Interested in gemmology and want to learn more? Why not try one of our Introduction workshops?

Want to become a gemmologist with Gem-A? Take a look at our Gemmology Foundation and Gemmology Diploma courses.

Tagged under
More in this category: « Getting Started with Quartz Inclusions The Extraordinary Siren of Serendip Blue Sapphire »
Tweet
Become a Gem-A Member
Apply to become a Gem-A Member
Subscribe to our Newsletter
Keep updated with Gem-A
Sign Up
Get in Touch
Can't find what you're looking for?
Contact Us