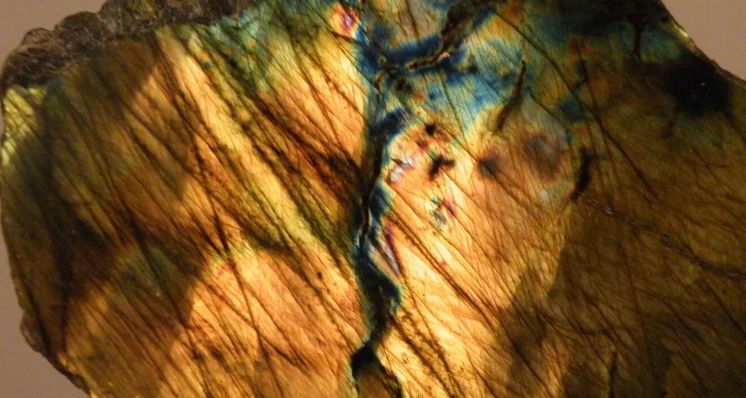 Iridescence is a display of colours which is seen when white light reflects from structures on or in gemstones. In opal, prismatic colours are seen because spectral colours are separated. In labradorite and other gemstones, there are blended to produce interference colours. Iridescence, or play of colour, may be seen in soap bubbles or insects such as butterflies and beetles, as well as in gemstones.

What are the Causes of Iridescence?

Iridescence can be caused by the diffraction of light from regular structures, or by reflection from thin film on or in materials. The thin films may be liquids gases or solids. Crystals, liquid-filled inclusions, fractures and cleavages may all cause the effect. 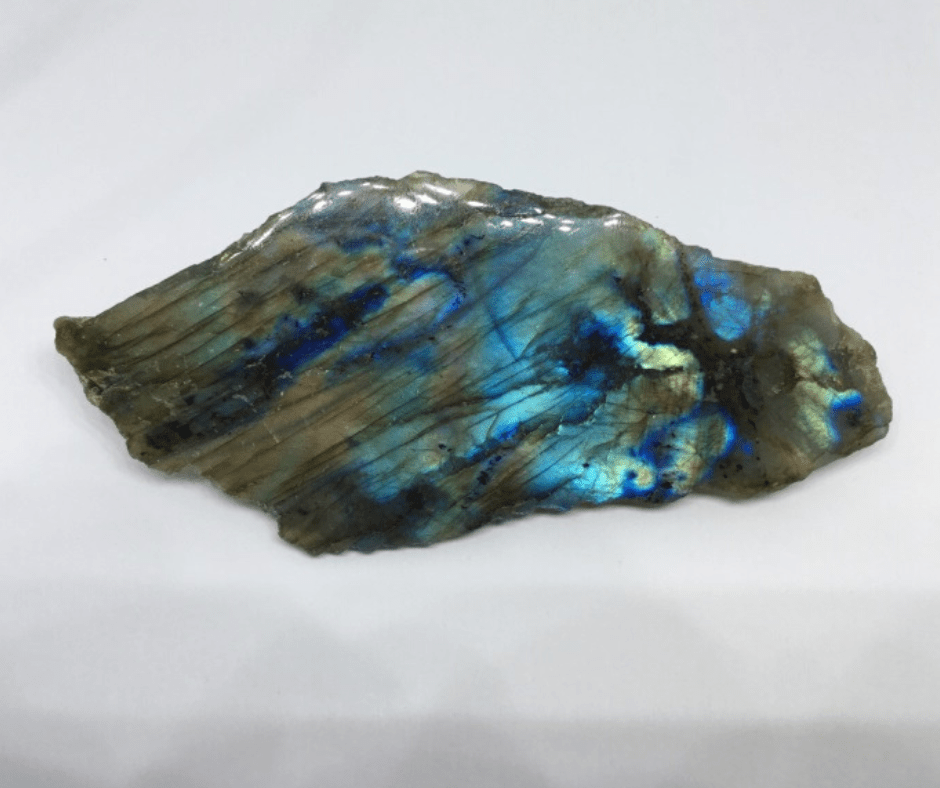 An example of thin film interference in labradorite. Image by Barbara Kolator.

Light striking a thin film is partly reflected from the upper surface but part refracts into the film and is reflected from the lower surface. The light is divided into two parts which re-combine at the upper surface of the film. They are said to be ‘in phase’ when thin crests and troughs coincide; these light waves become brighter. Some are out of phase; wave crests combine with wave troughs so that the waves are eliminated.

Iridescence is seen when some colours in white light are weakened or eliminated and others are strengthened. Blending these colours produces coloured light instead of white light.

The colours seen will depend on the refractive index (RI) and thickness of the structures which cause the interference. In labradorite this consists of interlayered feldspar of different compositions.

Moonstone, another variety of feldspar, also produces iridescence but this is a lot more subtle and can result in just a hint of blue as the layers have different thicknesses compared to labradorite and the colours are dominated by shorter wavelengths. 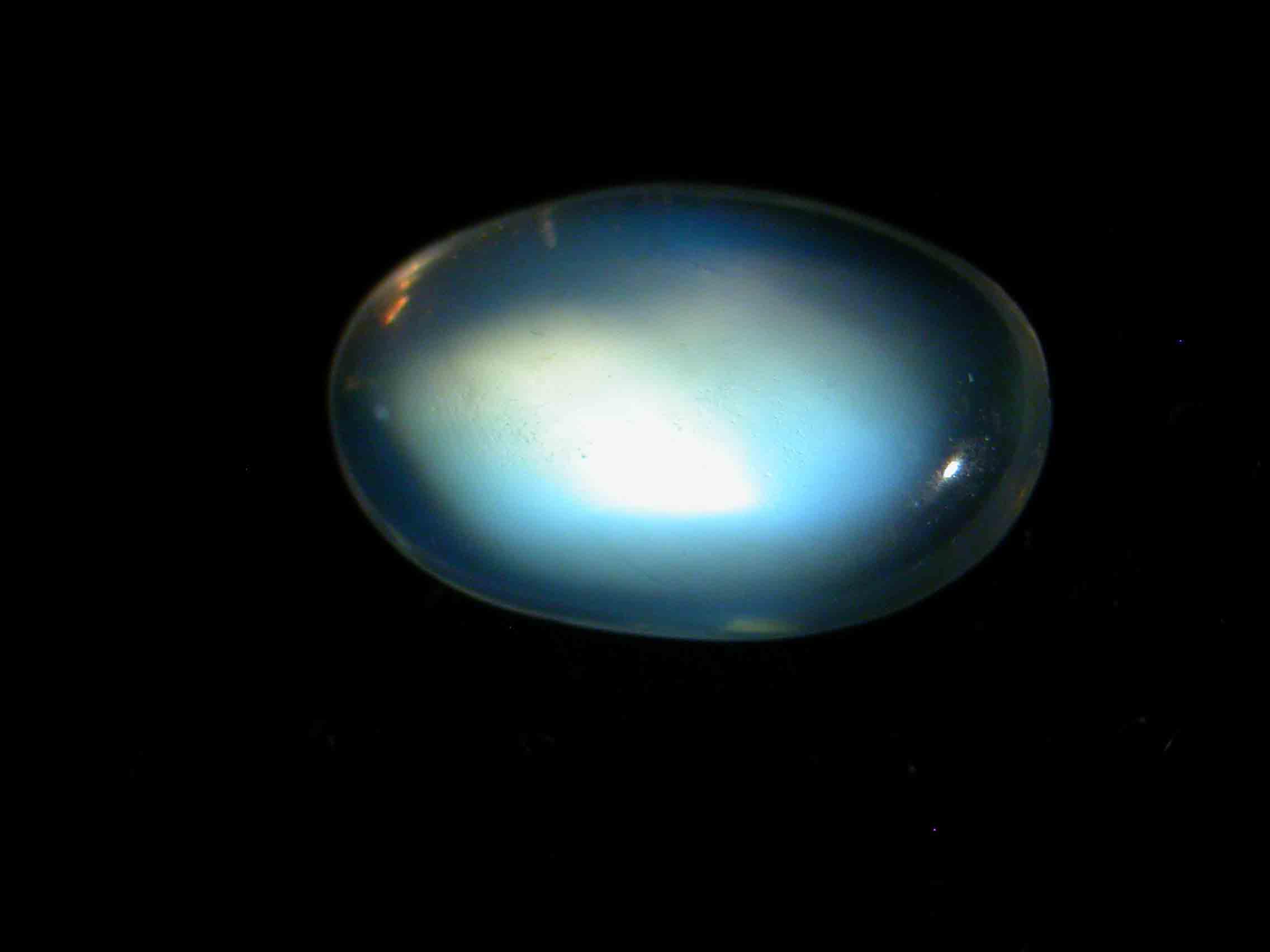 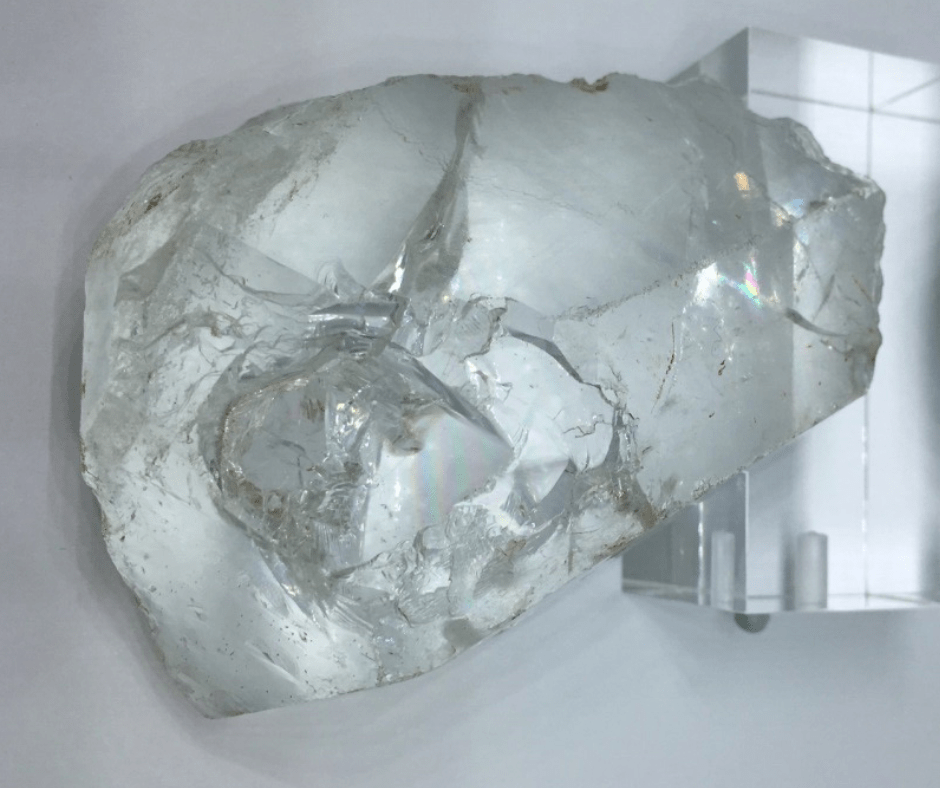 Iridescence in Stones with Fractures

Iridescence can also occur in cracks, fissures and cleavages. The thin films here consist of air. This results in a play of colour which may be seen in calcite or topaz crystals. The colours appear spread out and shimmer as the stone is moved and light catches it at a different angle. 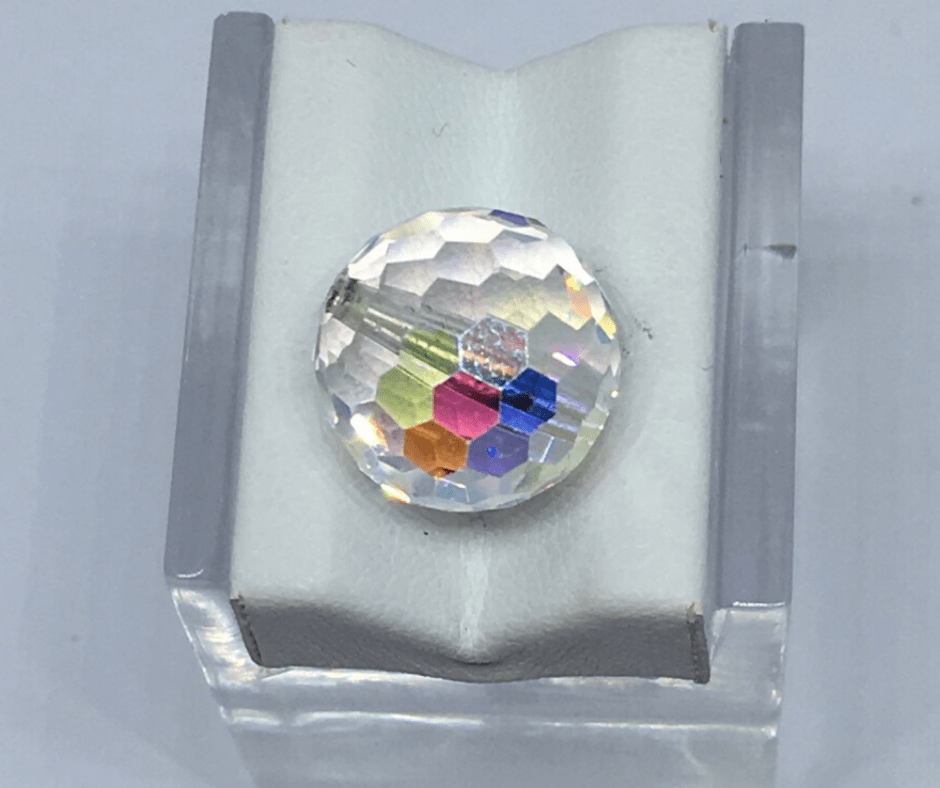 Iridescence is also seen in coated stones such as topaz (mystic topaz), quartz and glass where they have been covered with a microscopic layer of metals such as gold, titanium or cobalt, this produces the same shimmery play of colour. 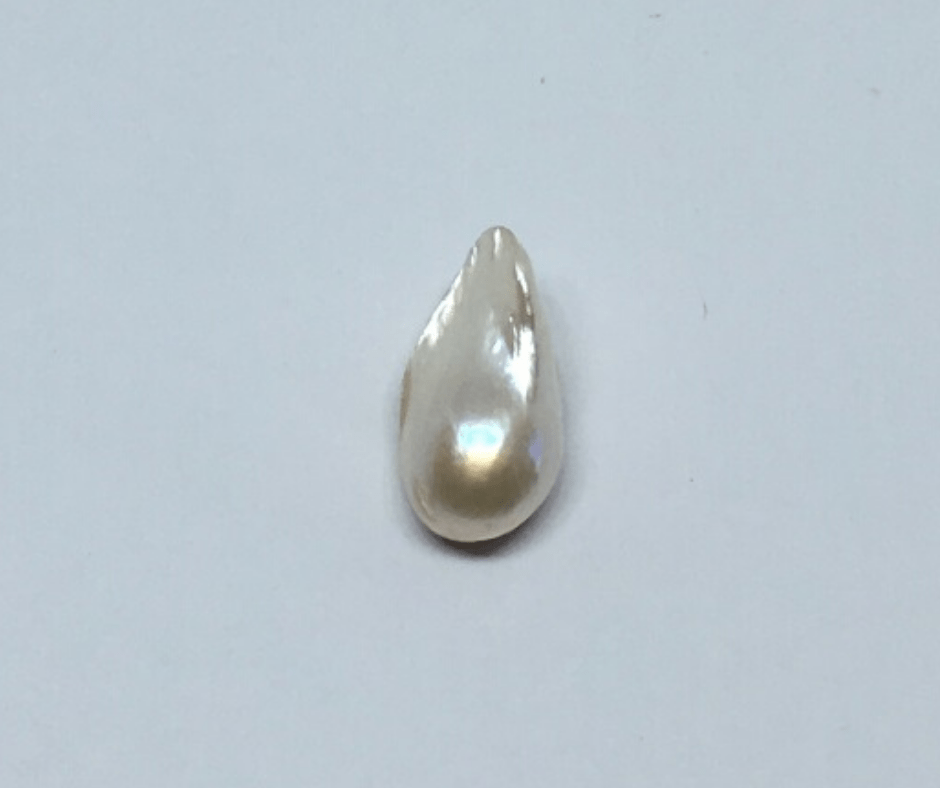 Orient visible in a baroque pearl. Image by Barbara Kolator.

Iridescence in pearls contributes to their lustre and adds to their body colour and overtone. Lustre combined with iridescence results in the orient of pearls.

The causes of orient in pearl are complex; pearl nacre is made of overlapping platy layers of aragonite. Light is reflected from the layers. Interference occurs when this happens and subtle moving colours are seen. Diffraction produced by regularly spaced crystal boundaries also results in iridescence. Certain pearls such as melo and conch do not exhibit this phenomenon. 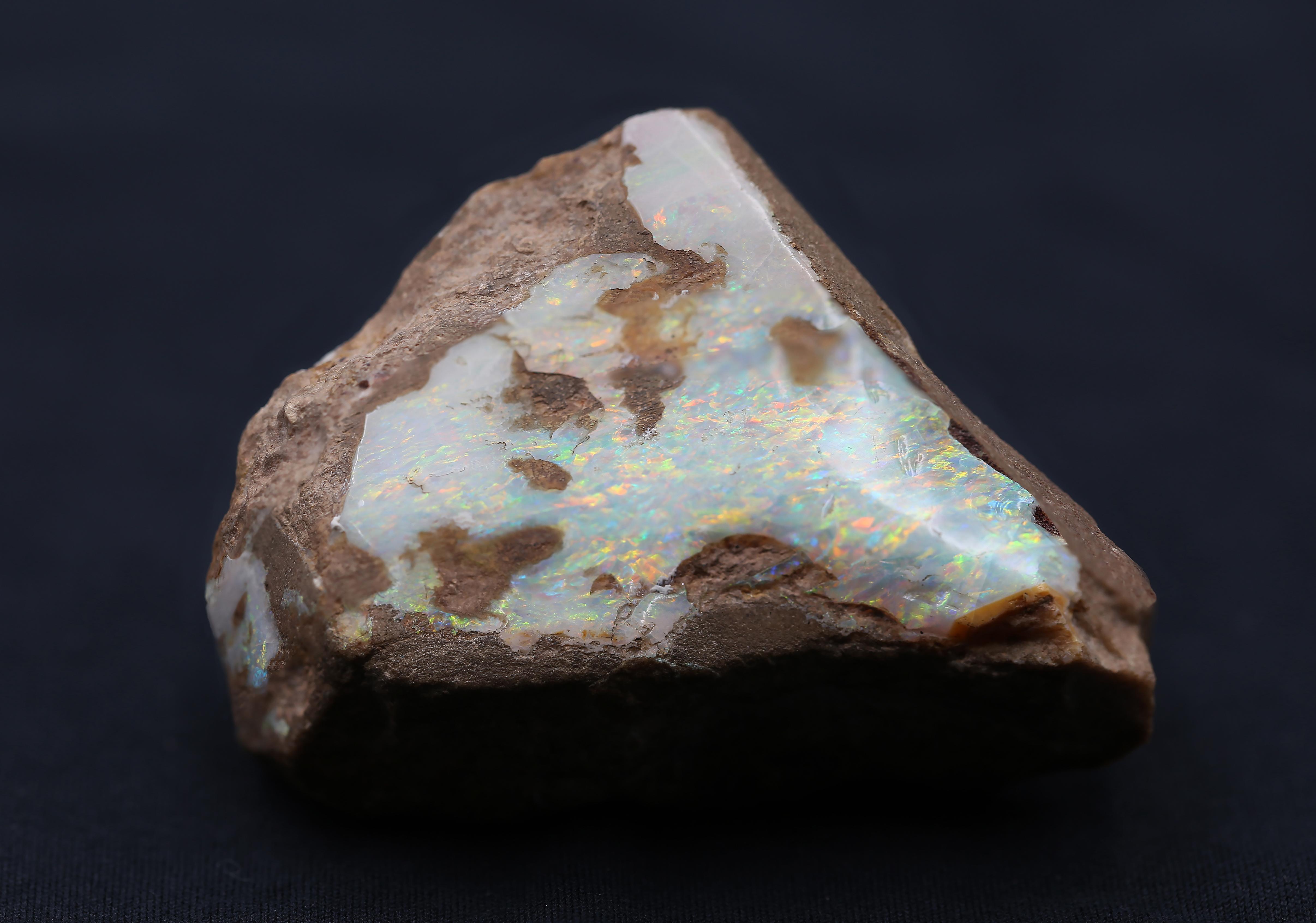 Iridescence in Opal: Play of Colour

Play of colour in opal is caused by diffraction and interference but instead of layers, the opal is made up of sub-microscopic spheres which are regularly stacked with spaces of only a few hundred nanometres between them. The resulting colours depend on the size and arrangement of the spheres. 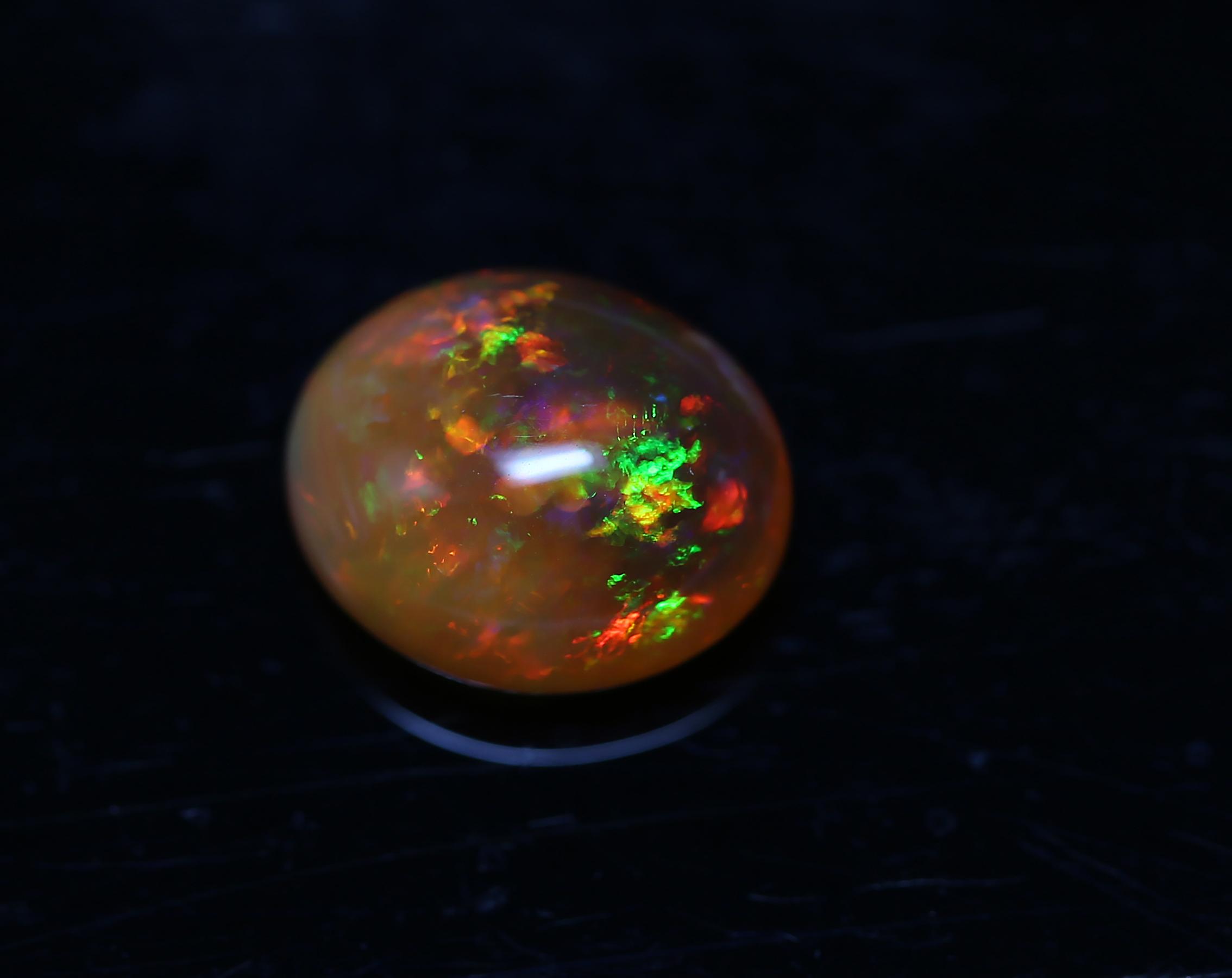 Iridescence visible in an opal cabochon. Image by Henry Mesa.

White light reflected from these structures is dispersed so that different spectral colours are separated. If the spaces are large, all colours are produced and the most desirable red colours are seen. If they are smaller, only blues, violets and greens are visible.

Put simply, iridescence, this varied and interesting phenomenon which adds such magic to gemstones and the natural world, happens because of the way light reacts while going through or around spaces and surfaces of materials. Quite a nice fact to keep up your sleeve the next time someone compliments your shimmering pearls or feldspars!

If you're passionate about gemmology and want to learn the basics, take a look at our upcoming Introduction workshops.

Thinking about developing your knowledge on gemstones? Why not consider taking our Gemmology Foundation course.

Tagged under
More in this category: « Hidden Treasures: Highlights of Gem-A's Gemstones and Minerals Collection Getting Started with Quartz Inclusions »
Tweet
Become a Gem-A Member
Apply to become a Gem-A Member
Subscribe to our Newsletter
Keep updated with Gem-A
Sign Up
Get in Touch
Can't find what you're looking for?
Contact Us